ABSTRACT: Diabetic retinopathy (DR) is a micro vascular disorder affecting the retina of the eye. Many genes have been identified for its pathogenesis. Endoglin (ENG) is one of the candidate gene involved in DR. Several literature studies helped us understand that the in vitro and in vivo studies of these candidate genes had demonstrated the role of a new gene called endoglin (ENG) capable of inhibiting angiogenesis. In this present study we characterized the physicochemical and functional properties of endoglin gene using bioinformatics tools as this had not been studied previously. The three dimensional structure of endoglin was also computed using homology modelling and the reliability of the model was assessed by predicting its secondary structure along with validation. Additionally, using experimental evidence score, phylogenetic analysis and protein-protein network was framed between endoglin and its interacting neighbouring partners. These results are innovative and relevant enough to start prospective studies that will allow us to establish the relative strength of the prediction of diabetic retinopathy according to the endoglin levels presented by the patient.

INTRODUCTION: Diabetic retinopathy, a leading cause of blindness in the developing countries is a prototypical micro-vascular disorder associated with micro-aneurysms, intraretinal hemorrhages, capillary non - perfusion, intraretinal micro-vascular abnormalities and neo-vascularization. Global population based data indicate that it is the fifth most common cause of blindness in the world 1. The duration of diabetes and glycemic control is the two most important factors in the development of retinopathy 2.

However, these factors alone do not explain the occurrence of retinopathy. It may be absent in some patients with poor glycaemic control even over a long period of time, while others may develop retinopathy in a relatively short period despite good glycaemic control.

Endoglin (ENG), also known as CD105, is a disulphide-linked homodimeric transmembrane glycoprotein of 180 kDa that consists of an extracellular domain (561 amino acid residues) and a cytoplasmic region (serine/threonine-rich 47 amino acid residues) 9 - 10. The extracellular domain comprises a zona pellucida (ZP) domain, with an arginine – glycine - aspartic acid (RGD) binding motif 11 - 12, while several potential phosphorylation sites are located in the intracellular region 13. ENG gene is located in chromosome 9 (9q33 - q34.1) and has 14 exons and 22 distinct introns which are associated with human vascular endothelium 14 - 15. Mutations in this gene cause hereditary hemorrhagic telangiectasia, also known as Osler-Rendu-Weber syndrome 1, an autosomal dominant multisystemic vascular dysplasia. Spliced transcript variants encoding different iso forms have been reported for this gene.

Secondary Structure Prediction: Secondary structure of protein sequence was predicted using GOR IV and SOPMA. GOR IV method is based on information theory and was developed by J. Garnier, D. Osguthrope and B. Robson 19. SOPMA (Self-optimized prediction method with alignment) is an improvement of SOPM method. These methods are based on the homologue method of Levin et al. This self-optimized prediction method builds sub databases of protein sequences with known secondary structures; each of the proteins in a sub database is then subjected to secondary structure prediction based on sequence similarity. The information from the sub databases is then used to generate a prediction on the query sequence.

Protein Motif Identification: Finger PRINT Scan was used to identify the motif of the target protein. This tool identified the closest matching PRINTS sequence and motif fingerprints in a protein sequence.

Trans-Membrane Prediction: TMPred relies on a database of trans-membrane proteins called TMbase 20. TMbase which is derived from uniprot, contains additional information on each sequence regarding the number of trans-membrane domains they possess, the location of these domains, and the nature of the flanking sequences. TMPred uses this information in conjuction with several weight matrices in making its predictions.

The sequence in one letter code is pasted into the query sequence box, and the user can specify the minimum and maximum lengths of the hydrophobic part of the trans-membrane helix to be used in the analysis. The output has four sections: a list of possible transmembrane helices, a table of correspondences, suggested models for trans-membrane topology and a graphic representation of the same results.

It first compares the target protein with the crystallographic database in pdb and modelling is attempted only if there is a homolog. The template structures are selected if there is at least 25 % sequence identity in a region more than 20 residues long. If this approach finds one or more appropriate entries in pdb, atomic models are built and energy minimization is performed to generate the best model. Those results can be resubmitted to Swiss model using its optimizing mode, which allows for alteration of the proposed structure based on other knowledge, such as biochemical information. The modelled structure was estimated by assessing the QMEAN score and Z-score and was visualized using Rasmol software.

Phylogenetic Analysis: The phylogentic analysis of endoglin gene was done to identify the number of species that share common structural and functional features. The multiple sequence alignment was done using Clustal Omega with default parameters. The output was analyzed for sequences that are aligned for the complete length, scores, alignment, conserved residues, substitutes and semi conserved substituted residue patterns.

The phylogenetic tree was constructed based on the bootstrap Neighbour Joining (NJ) method 22 - 24. The stability of the internal nodes was assessed by bootstrap analysis with 100 replicates.

Primary Structure Prediction: Primary structure of ENG protein was predicted and its physiochemical properties were analyzed by using Expasy’s Protparm server. Result showed that endoglin protein has 658 amino acid residues and the estimated molecular weight is 70578.0. iso-electric point (pI) is the pH at which the surface of the protein is covered with charge but net charge of protein is zero. The calculated iso-electric point (pI) was computed to be 6.14. The computed value is less than 7 which indicates that the protein is acidic. The maximum number of amino acid present in the sequence was found to be leucine (13.1%) and the least was that of tryptophan (1.1%). The total number of positively charged residues (Asp + Glu) was 54 and the total number of negatively charged residues (Arg + Lys) was 46.

The very high aliphatic index (95.29) indicates that this protein is stable for a wide range of temperature range while the instability index (50.29) provides the estimate of the stability of protein in a test tube. Endoglin protein is found to be unstable because of the low instability index. The GRAVY value is low 0.076 indicating better interaction of the protein with water.

Functional Site Prediction: The domain search was done by conserved domain search on BLAST site and it showed the presence of single domain - the zona pellucida superfamily (Fig. 1).

TABLE 2: SECONDARY STRUCTURE OF ENG BY SOPMA AND GOR

Transmembrane Prediction: The TMPred program makes a prediction of membrane spanning regions and their orientation. The algorithm is based on the statistical analysis of TMbase a database of naturally occurring trans-membrane proteins. The prediction is made using a combination of several weight-matrices for scoring for the endoglin protein. The results predicted 7 helices from inside to outside and 6 helices from outside to inside. As we know that scores above 500 are considered significant only one prominent trans-membrane region was identified for the protein. However according to TMPred the strongly preferred model for trans-membrane topology showed total score of 7149 with 5 strong TM helices (Fig. 3) and (Fig. 4). 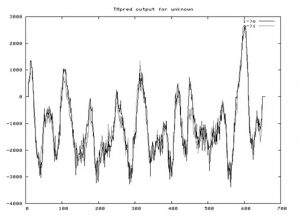 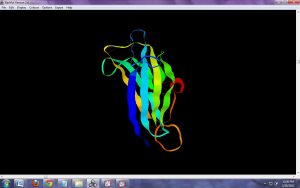 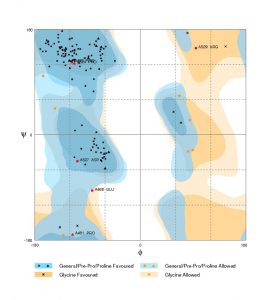 Phylogenetic Analysis: The input for multiple sequence alignment was taken from 9 species whose blast hit was between 70 - 98 %. The clustal omega tool was run with default parameters such as a value of 10 for gap open penalty and a value of 0.05 and 0.05 for extending a gap and separating a gap respectively. The phylogenetic tree was drawn using NJ plot (Fig. 7).

CONCLUSION: Endoglin is a homodimeric membrane glycoprotein primarily associated with human vascular endothelium. The regulation through the polyol pathway is thought to affect the accumulation of endoglin that is associated with diabetes mellitus and its complications. Further research involving development of appropriate strategies for studying this protein could be significance in preventing diabetic complications. In the present study the sequence and structural analysis of endoglin gene was done by various computational tools. These results are innovative and relevant enough to start prospective studies that will allow us to establish the relative strength of the prediction of diabetic retinopathy according to the endoglin levels presented by the patient.