INTRODUCTION: Laccases, peroxidases (including lignin peroxidases, manganese peroxidases, and manganese-independent per-oxidases), and H2O2-generating oxidases are components of the lignin-degrading enzyme system 1. So far, wood-rotting fungi, such as white rot and soft rot fungi are the only organisms known to be capable of extensively degrading lignin 2.

There has been great interest in using fungal laccases and peroxidases for biotechnological processes due to their chemical and catalytic features 3, 4. Investigations of the use of wood-rotting fungi and their ligninolytic enzymes in bio pulping processes in paper-making industries could lead to ways to reduce the energy and chemical requirements of those processes. A biobleaching process requires substantial enzyme activities at an alkaline pH and a high temperature. Also, several other potential applications have been suggested for producers of ligninolytic enzymes 5.

Laccases (EC 1.10.3.2; benzenediol: oxygen oxidoreductases) are for the most part extracellular copper-containing glycoproteins with molecular weights between 60,000 and 80,000. Lignin peroxidases (EC 1.11.1.14; diarylpropane:oxygen, hydrogen peroxide oxidoreductases; molecular weights, 38,000 to 43,000) and manganese peroxidases (EC 1.11.1.13; Mn(II): H2O2 oxido-reductases; molecular weights, 43,000 to 49,000) are glycoproteins containing one protoporphyrin IX as a prosthetic group 6. The reactions catalyzed by laccases and peroxidases are very similar 7, 8, 9, 10. Both types of enzymes oxidize phenolic compounds and aromatic amines via one-electron oxidations, which creates radicals. Besides differences in the prosthetic groups, the laccases also differ from the peroxidases by generally having a lower oxidation potential 11, 12.

Many producers of laccase (e.g., Ceriporiopsis subvermispora 13, Coriolus versicolor 14 and Panus tigrinus 15, Marasmius sp.,16 Coprinus sp. 17, Ganoderma sp. 18 and producers of lignin peroxidases and manganese peroxidases (e.g., Phanerochaete chrysosporium and Bjerkandera adusta 19 secrete isoenzymes which differ in stability and catalytic features 20. The extracellular peroxidases isolated from Coprinus cinereus 21 and Arthromyces ramosus 22 differ from lignin peroxidases and manganese peroxidases by having broader substrate specificities and in the architecture of their active sites.

We recently discovered that agaricomycetes Daedaleopsis confragosa produce laccases, Lignin peroxidases, and Manganese peroxidases and the purpose of this study was to report the production in submerged fermentation and to perform the decolorization study.

Collection of Sample and Isolation of Fungus: A ligninolytic enzyme-producing bracket mushroom, mycelia were isolated from tree trunk from Karwar coastal region, Karnataka, India. For the isolation of Daedaleopsis confragosa Fig. 1, a young fruiting body was briefly washed with sterile water and 1% sodium hypochlorite (1min) then fruiting body was cut into small pieces (2-5 mm long) in a bottle containing sterile water. The solution was homogenized and a small aliquot was inoculated onto potato dextrose agar medium.

Laccase Assay: The culture supernatant was added with 1 ml of guaiacol and 100 mM Phosphate buffer (pH 5.5). The reaction mixture was incubated at 40 °C for 30 min. The color change was measured using spectroscopy at 460 nm. One unit of laccase activity can be defined as amount of enzyme required to hydrolyze guaiacol during incubation period 23.

Lignin Peroxidase Assay: To 1 ml of culture supernatant, 2 mM vetryl alcohol, 0.27 mM H2O2 and 10 mM tartrate buffer (pH 3.0) were added and incubated for 30 min. The color change was read at 310 nm. The enzyme activity can be measured by amount of enzyme required to convert one unit of vetryl alcohol into vetryl aldehyde during the incubation period 24.

Effect of Metal Ions on Ligninolytic Enzyme Production: The effect of metal ions on the activity of the enzyme was studied to determine nature of active site of enzyme. During this study following salts of ions were taken at the rate of 50 mM/ml and100 mM/ml of reaction mixture. The ions used were Ag+ (AgNO3), Mg+2 (MgSO4), Mn+2 (MnSO4), Fe+2 (FeSO4), Cu+2 (CuSO4), Zn+2 (ZnSO4) and Hg+2 (HgCl2).

Decolourization of Selected Textile Dyes: Decolourization experiment was conducted in 250 ml Erlenmeyer flask containing 100 ml of Mod. PDB medium. The Daedaleopsis confragosa was tested for its ability to decolorize selected textile dye over a period of 24 h. The final concentrations of the dye in the medium without inoculation with Daedaleopsis confragosa was considered as a control. The extent of decolorization was recorded as residual color. The dyes (50 mgl-1) were monitored at their absorbance maxima at 620 nm 23.

Effect of pH and Temperature on Ligninolytic Enzyme Production: The pH optima for ligninase production by white-rot fungi are highly dependent on chemical composition of the substrates and fermentation media 27, 28. The result revealed that the Laccase (Lac), Lignin peroxidase (LiP) and Manganese peroxidases (MnP) was observed highest activity at pH 6.0 (0.880 U/ml), 5.5 (30.43 U/ml) and 7.2 (0.180 U/ml) respectively Fig. 2. Similar to our findings, maximum LiP, and MnP activities were produced by Pleurotus ostreatus in the pH range 4.0 to 5.0 at 25 °C. The optimum ligninase production by Coriolus hirsutus and Trametes villosa CCB176 has been reported at pH 4.0 and 5.0, respectively 29, 30. 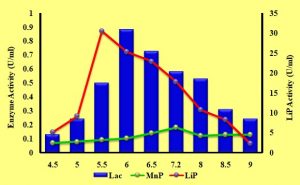 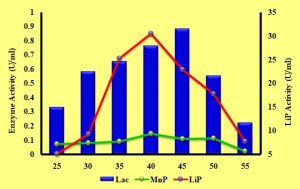 Coriolus hirsutus has also been found to excrete a considerable amount of laccase and Manganese peroxidases at 28 °C 31. A significant influence of incubation temperature on ligninolytic enzymes of Pleurotus sp. and Dichomitus squalens temperature ranging from 25 °C to 30 °C were found optimum for ligninase production 32, 33, 34, 35. 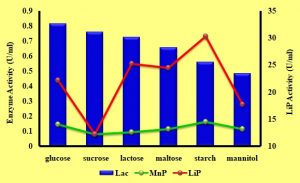 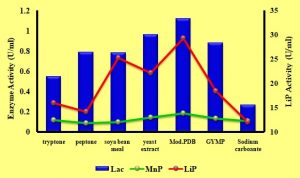 Significant laccase secretion by Trametes pubescens started when the glucose concentration in the growth medium reached a certain low, critical concentration 36. The highest laccase yields by using a combination of glucose and starch as carbon and yeast extract as a nitrogen source by Coriolus versicolor 37.

The enzyme profiles varied with different carbon and nitrogen source combinations. The source and concentration of carbon and nitrogen are the powerful factors regulating the synthesis of ligninolytic enzymes by white-rot fungi 38. Peptone turned out to be the best nitrogen source for laccase and MnP accumulation by Coriolopsis gallica 39. Peptone enhanced the production of ligninolytic enzymes by Pleurotus ostreatus 40 and Polyporus sanguineus 41.

Previous reports are showing that the addition of100 mM CuSO4 during the exponential growth phase of the fungus led to a remarkably increased laccase production 36. Supplementation of CuSO4 at 100 mM concentration yielded high amounts of laccase (175 IU/ml) at an incubation period of 5 days 42. 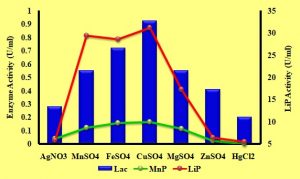 Decolourization of Textile Dyes by Daedaleopsis confragosa: The isolated Daedaleopsis confragosa was tested for their ability to decolorize the selected dyes i.e., Navy blue HER, Orange HE2R, Red M8 B, and Green HE4BD by 75.82%, 70.40%, 80.05% and 90.08% within 96 h respectively. A similar result was reported by Vantamuri and Kaliwal, (2016) as Navy blue HER, Green HE4BD and Orange HE2R by 72.47%, 75.31.05% and 76.58% within 96 h respectively Fig. 7 and Fig. 8 23. The Pseudomonas putida was tested for their dye decolourizing ability against synthetic dyes and industrial effluents 43. The white-rot fungi Trametes hirsute and Plerotus florida for their dye decolorising ability against three reactive dyes Blue CA, Black B133 and Corazol violet SR 44. Plerotus sajor-caju under suspension culture completely decolorized several phenolic azo dyes 45. 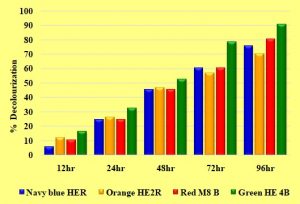 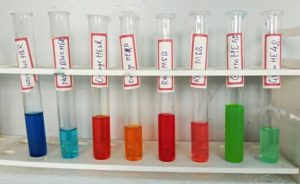 CONCLUSION: In conclusion, the literature data and the results obtained in this work show that the effect of carbon and nitrogen sources depends on the fungal strain and nature of the compound tested. Daedaleopsis confragosa was found to be a new fungal isolate that exhibited high decolorization activity and also exhibited thermos tolerant ligninolytic enzymes. In addition, these major components of nutrition media are factors not only determining the expression of fungal enzyme activity but also the ratio of individual enzymes in enzyme complexes. Further investigation required revealing the structure of the produced enzyme with respect to the inducer structure and mechanism will contribute to several industrial applications. The promisingly high activities of MnP and LiP suggest the possibility of commercialization of the production process.

ACKNOWLEDGEMENT: Authors are grateful to the University Grant Commission New Delhi, India for providing the financial support under UGC MRP NO. F.MRP/12th plan/14-15/KAKA088/UGC-SWRO/(10/12/14) and authors are also acknowledged to the Department of Biotechnology, Government Arts and Science College, Karwar for providing laboratory and technical support.

CONFLICTS OF INTEREST: The authors hereby declare no conflicts of interest.