The present study was aimed at investigating the chemical composition and antifungal activity of Ethanol Extracted Haramaya propolis (EEHP). The GC-MS analysis of EEHP showed the presence of sixteen compounds and twelve compounds were identified by means of their retention times, by comparison of their mass spectra with the NIST 2005 library data and literature. The major constituents of EEHP were Benzenamine, N, N-dibutyl- (21.94%), Paromomycin (9.74%), 4-Aminobutyramide, N-methyl-N-[4-(1-pyrrolidinyl)-2-butynyl]- (9.26%) and DL-Tryptophan, 5-methoxy (7.43%). The Crude EEHP showed antifungal activities against Fusarium sp., Aspergillus niger and Colletotrichum sp. GC-MS results showed that the antifungal activities of Haramaya propolis could be because of the presence of 3-(α-Hydroxyethyl)-aniline, Benzenamine,N, N-dibutyl, DL-Tryptophan,5-methoxy, 6-Amino-5, 8-dimethoxyquinazoline, Paromomycin and Imidazole, 2-fluoro-5-[2-carboxyvinyl].

INTRODUCTION: Propolis (bee glue) is a  sticky dark-colored material  that honeybees (Apis  mellifera) collect from living  plants, mix  it with  wax  and  use  it  in  the  construction  and adaptation  of their  nests,  mainly to fill  out  cracks in  the  bee  hive. It also functions to repair the hive, to seal openings in the hive and to eliminate contaminating microorganisms in the hive 1, 2. Propolis is not only a building material; it is the most important “chemical weapon” of bees against pathogen microorganisms and has been used as a remedy by humans since ancient times.

The word propolis was probably coined by Aristotle from the Greek words “pro” meaning “in front of” and “polis” meaning “city”. The combined meaning then becomes “In front of the City” or “Defender of the City (or Beehive)” and this is how bees use propolis. It has been used in folk medicine since ancient times and is now known to be a natural medicine with antibacterial, antifungal, anesthetic, antitumoral, antioxidative, anti-inflammatory, imuno-modulatory, cancer prevention, anti-viral, anti-yeast, antimicrobial, cardiovascular and other beneficial activities 3.

With the advent of modern chromatographic techniques frequently associated with Mass Spectrometry (MS), many compounds have been isolated and identified in propolis 4.  But the complex chemical composition of propolis is frequently updated due to many regional variations.

More than 300 propolis constituents have been identified by Gas Chromatography-Mass Spectrometry (GC-MS), chromatographic and spectroscopic techniques. These compounds are composed of 50% resin (polyphenolic fraction) and  balsam (cream), 30% wax, 10% essential and aromatic oils, 5% pollen, and 5% other substances 5.

Literature survey revealed that flavonoids, aromatic acids, diterpenic acids and phenolic compounds appear to be the principal components of propolis samples. The properties and actual contents of propolis depend on the collecting location of the bees, time of year and plant source 6. For many years, GC-MS has been used for the detailed analysis of the main volatile and semi-volatile   components of propolis 7, 8.

As volatile components, various mono and sesquiterpenes are found in propolis 9. Other constituents of volatile oils include alcohols; mainly aromatic alcohols, phenols, aldehydes, ketones, acids (from acetic to stearic acid), esters, a series of alkanes, alkylated benzenes and naphthalene 10. Propolis contains, however, many components that are not volatile enough for direct GC- MS analysis even upon derivatization or high-temperature 10.

The great variability in chemical composition of the propolis from different regions is because honeybees extract raw materials from different plants in different ecosystems for their production of propolis 11. Crude Ethanol Extract of Propolis (EEP) collected from Egypt and South Africa showed antimicrobial activity against a wide range of pathogenic bacteria, fungi, yeasts and viruses 12, 13.

Description of the Study Area: Haramaya University is located at a latitude of 9o 20’ north of the Equator and 42o 03’ longitude east of meridian. The university has a total area of about 46 km2. It has a moderate average temperature of 16oC, and the mean maximum and minimum annual temperature is 24.02 and 9.73oC, respectively 14.

The mean annual rainfall is 780 mm. The 1980 m elevation of the area (weinadega) ensures that it enjoys a relatively moderate and pleasant climate throughout the year. There were 12 beehives in the university. Among these 5 hives are traditional and 7 of them are modern beehives. Eucalyptus glublus, Eucalyptus camnadulesis (exotic), Vernonia amygdalina (indigenous), Spathodea nilotica (exotic), Jacaranda mimosifolia (exotic), Pinus radiate(exotic), Olea africana, Cordial Africana and Grevillea robusta are dominant plants and vegetations in Haramaya 14.

Propolis Samples Collection: Samples of propolis (150 g) was collected by hand (by scrapping from frames and walls of the beehives) from Haramaya University Beekeeping Sections from October 2010 to November 2010 and kept in the refrigerator until processed. 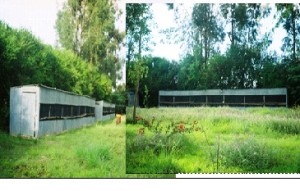 Extraction and Sample Preparation: The propolis sample collected was air dried, crushed into pieces and then weighed and 100 g was mixed vigorously with 70% absolute ethyl alcohol (Analytical reagent grade, Eastwayspark, U.K) in a ratio of 1 g: 5 mL (w/v) and then sealed in a container with intermittent shaking twice a day for two weeks 15. It is important to allow the alcohol molecules to come into contact with as many propolis compounds as possible, in order to extract them from the solid mass. After two weeks, the supernatant liquid was filtered with Whatman No. 1 filter paper. The liquid portion was stored in a dark brown bottle in a cool, dry and dark place. The EEHP solution was then filtered through Whatman No. 1 filter paper to avoid waxes. The alcohol was evaporated with a Rota vapor under vacuum and reduced pressure to yield 38.5 g.

It was kept in a clean dark, airtight bottle in a refrigerator at 5oC until used. About 10 mg of the crude extract was subjected to GC-MS analysis by head space sampler in Ambo University.

GC-MS Analysis of Ethanol Extract of Haramaya Propolis (EEHP): GC-MS analysis of EEHP was performed using a Perkin Elmer Clarus 600 GC-MS fitted with a HP-5 MS capillary column (30 m length x 320 µm internal diameter coated with 5% diphenyl 95% dimethylpolysiloxane, film thickness 0.25µm). The column oven temperature was initially held at 60oC for 2 min, then programmed to rise to 170oC at a rate of 20 oC/min and held for 3 min. The temperatures of the injector port and the MS interface were set at 220 and 200 oC, respectively.

Helium was used as the carrier gas at a flow rate of 1 mL/min with a column inlet pressure of 40 psi. The mass spectra were recorded in electron ionization (EI) mode at 70 eV with scanning from m/z 35 to m/z 450 amu with a run time of 60 min and mass source of 230 °C. The oven, needle and transfer temperature of the head space sampler were 150 and 170oC, respectively at a constant mode of operation. The time of coc cycle, thermostat, pressurization, injection and withdrawal of the head space sampler was 60, 10, 3, 0.05 and 0.2 min, respectively.

The identification of various compounds present in propolis sample were carried out by computer search on a NIST 2005 MS data library. In some cases, when identical spectra have not been found, only the structural type of the corresponding component was proposed on the basis of its mass-spectral fragmentation. The components of EEP were determined by considering their areas as percentage of total ion chromatogram. Some compounds could not be identified due to the lack of authentic samples and their library spectra.

Antimicrobial Assay: Bioassays of the antifungal activities of crude EEHP towards three common phytopathogenic fungi namely; Fusarium sp., Aspergillus niger and Colletotrichum sp. was tested only by the Petridish bioassay method 13. These phytopathogenic fungi were taken from infected avocado fruits. The hosts were first dipped in Sodium hypochlorite (Clorax) at 10% concentration for 2 minutes and then rinsed with sterile distilled water twice and plated on Malt Extract Agar (MEA) in petridishes and incubated at 25oC for 7 days. The fungi were only identified to genus level based on hyphal and spore morphology 16, 17.

Though extraction of propolis was done with 70% ethanol, treatments were done with 60% ethanol to minimize the effect of a highly concentrated solvent. Propolis concentrations 1, 2, 5, 7 and 10 mg/mL were prepared using 60% ethanol. The control for all experiments was 60% ethanol in place of different extract concentrations. Each experiment was repeated three times 18. All the tripled MEA media were sterilized by autoclaving at 121oC and 1.03 bar for 15 min. Each of the grown fungi was placed onto the center of the MEA plates using a sterile cork borer of 10 mm diameter and then incubated at 25oC. The zone of inhibition on the mycelium growth of each fungus for each replicate was measured in mm as the average of two cross diameters continuously after every 48 h of inoculation until they almost filled the petridishes without EEHP. Finally, the Relative Inhibition (RI) by the chemicals on mycelia growth of each fungus at different concentrations was calculated for the last day observation as percentage inhibition over control as follows:

Statistical Analysis of Data: The RI was calculated for the 192 hincubation period.Data were expressed as mean ± standard deviation. The data obtained were subjected to one-way ANOVA test to determine whether there was significant difference among each concentration and also between the lengths of incubation 13. 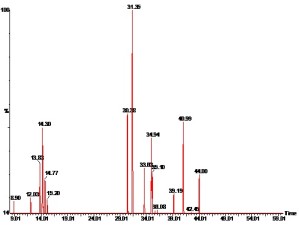 Unidentified components were present in such low amounts that either no mass spectrum could be recorded or the spectrum was too poor for interpretation.

The variability of constituents of propolis samples could be due to the difference in propolis collecting honeybee species from different plants depending on the geographic location. Apis mellifera jementica (propolis collecting Honeybee race in Haramaya)is a type of bee species that collect propolis in the eastern, semi-arid lowlands and northwest low lands areas of Ethiopia 26.

These Honeybee race added other materials during the production of propolis from different plants depending on the geographic location. The plant sources of identified compounds from Haramaya propolis remain unknown in the present study. However, Baccharis dracunculifolia, Araucaria angustifolia, Araucaria heterophylla, Clusia minor and Eucalyptus citriodora are the main sources of the bee glue in Brazil 27.

The antimicrobial constituents of propolis resins and extracts are commonly phenols, flavonoids, aromatic acids and diterpenic acids 28, 29. The inhibition effect of the crude EEHP, against mycelia growth of three common phytopathogenic fungi namely; Fusarium sp., Aspergillus niger and Colletotrichum sp. was tested at five different concentrations (1, 2, 5, 7 and 10 mg/mL) by the Petri dish bioassay method and are recorded in Table 2.

The mycelium growth of each fungus for the crude extract treatment was measured as the average of two cross diameters continuously after every 48 h of inoculation, until they almost filled the petridish without EEP (Table 2 and Figure 4). Then the inhibition effect of the crude extract on mycelia growth of each fungus at different concentrations was calculated for the last day observation as percentage inhibition over control.

The GC-MS results showed that the antifungal activities of Haramaya propolis could be because of the presence of 3-(α-Hydroxyethyl)-aniline, Benzenamine, N, N-dibutyl, DL-Tryptophan, 5-methoxy, 6-Amino-5, 8-dimethoxyquinazoline, Paromomycin and Imidazole,2-fluoro-5-[2-carboxyvinyl].

Data showed that mycelium growth of Fusarium sp. and Colletotrichum sp. were inhibited by the crude extract while fast growing mycelium Aspergillus niger was not affected much.

These findings are also supported by earlier reports on Evaluation of an EEP as a Potential Pre andPost-Harvest Fungicide for ‘Fuerte’ Avocado (Persea americana Mill.) Fruits and Orchards 13.

TABLE 2:  EFFECT OF THE CRUDE EEHP ON THE GROWTH OF THREE PHYTO PATHOGENIC FUNGI

CONCLUSION: A matter of great concern regarding the production and use of propolis is the variation of its chemical composition, which has motivated proposals for quality chemical control 29, 30.

This study has confirmed that the identified components and their composition of Haramaya Propolis are different from previous research works. The composition of propolis may be affected by the bee race, soil, climate, vegetation native, trapping mechanism and altitude. The crude EEHP showed antifungal activities against Fusarium sp., Aspergillus niger and Colletotrichum sp.

The GC-MS results showed that the antifungal activities of Haramaya propolis can be attributed to its components as 3-(α-Hydroxyethyl)-aniline, Benzenamine, N, N-dibutyl, DL-Tryptophan, 5-methoxy, 6-Amino-5, 8-dimethoxyquinazoline, Paromomycin and Imidazole, 2-fluoro-5-[2-carboxyvinyl].

ACKNOWLEDGEMENTS: We wish to thank Mr Lemmesa Benti for his help in running GC-MS experiment in Ambo University, Ethiopia. The authors are thankful to Dr Amare Ayalew and Miss Haymanot Bizuneh, Department of Pathology, Haramaya University for antifungal screening.