ABSTRACT:  Black pepper (Piper nigrum) is a spice vine crop and which was used as a food preservative and as an essential component in traditional medicines. Moreover it is used also as a spice for curry cooking. The fruits and leaves may be both contains the medicinal activities. First time our concentration on to the fruits only. The fruits were collected and normally dried in the sunlight. The dried fruit was then converted into powder material. Then the powder of black pepper was extracted with ethanol in a soxhlet’s apparatus. The concentrated filtrate was isolated by column chromatography using solvent system-benzene: ethyl acetate (3:1). Again, recrystallization was performed by benzene with a minimum volume of chloroform to give pale yellow crystals of MP. 128-129oC (Reported 130oC). The IR, 1HNR and mass spectra of the pure crystalline compound (A2) were recorded. The mass spectra shows molecular ion M+∙ 284.5 which indicates that the molecular weight of the compound A2 is equal to that of piperinemolecular weight 285.

INTRODUCTION: Black pepper (Piper nigrum) is a spice vine crop. It belongs to the family Piperaceae. It is cultivated for its fruit, which is usually dried and used as a spice and seasoning. Black pepper is known as king of spices and widely and extensively used all over the world. It is a perennial climber, climbing by means of ivy-like roots which adhere to the support tree.

The sessile, small white flowers are borne in pendulous, dense, slender spikes of about 50 blossoms each. The berry-like fruits, or peppercorns, are round, about 0.5–1.0cm in diameter and contain a single seed. They become yellowish-red at maturity and bear a single seed. Spike length varies greatly, based on cultivar. The young berries are green, whitish green or light purple, while mature ones are green, pale purple or pale yellow and change to red on ripening.

South West India is the traditional home of this important spice, particularly the Western coastal regions of South Peninsular India (the Malabar Coast). Black pepper was the first oriental spice to be introduced into the Western world, and was well known among the Romans and Greeks. Black pepper 1 has multiple uses in the processed food industry, in kitchens, in perfumery, in traditional medicine and even in beauty care. Pepper is valued for its pungency and flavour, which is attributed by the alkaloid piperine and the volatile oil (Ravindran, 2000). By stimulating the digestive enzymes of the pancreas, piperine enhances digestive capacity and significantly reduces gastrointestinal food transit time. Piperine 2 has been documented to enhance the bioavailability of a number of therapeutic drugs as well as phytochemicals through its inhibitory influence on enzymatic drug bio-transforming reactions in liver and intestine. It strongly inhibits hepatic and intestinal aryl hydrocarbon hydroxylase and glucuronyl transferase.

Most of the clinical studies on piperine have focused on its effect on drug metabolism. Black pepper oil can be used to help in the treatment 3 of pain relief, rheumatism, chills, flu, colds, exhaustion, muscular aches, physical and emotional coldness, fevers, as a nerve tonic and to increase circulation. Furthermore, it increases the flow of saliva, stimulates appetite, encourages peristalsis, tones the colon muscles and is a general digestive tonic (Pruthi, 1993). The pepper based compounds have also seen commercial use as chemical carminatives; they have also been used for their ability to reduce excess gas in the intestines and the stomach. Aside from these, these compounds have also been used to stimulate the activity in the human heart and kidneys in medicine.

The specific compound in pepper known as pipperine 4 is commercially utilized to prepare different insecticides to be used against houseflies and other insect pests, for example, many gardeners use commercially made pepper sprays to fight several kinds of agricultural pests on useful plants. Recently, Vietnam has become the world’s largest producer and exporter of pepper (116,000 t in 2006).

Other major producers include Indonesia (67,000 t), India (65,000 t), Brazil (35,000 t), Malaysia (22,000 t), Sri Lanka (12,750 t), Thailand and China. Vietnam dominates the export market, exporting almost the entire produce. So far Bangladesh has to import a lot of spice from abroad to meet up the demand of spice. Though black pepper 5 is being cultivated in few areas of Bangladesh, it is not enough. Two hundred farmers of Vadeshar union of Bahubal upazilla under Habiganj district were dependent on the cultivation of betel leaf, pine apple, and lemon. But now they are cultivating black pepper commercially as it is profitable.

A crop of such economic importance is being neglected in our country as mere research has been done so far in our country. Besides the economic importance, the multipurpose use of black pepper can be known through research. Then it may possible to extend the commercial production of this spice throughout the country. So, the present study was undertaken for the following objectives:

Dried black pepper fruits were collected from a local market in Mymensingh used in the present study. The fruits for the study were cleaned to free from stone and other undesirable matter and sun dried. Then the sun dried fruits were ground in an electrically operated grinder to fine particle size.

The finely powder was extracted in a soxhlet apparatus. Exactly 250g of black pepper fruit powder was taken in thimble and around 800ml of 95% ethanol was added to it. The extraction was continued for 24 hours. The extract was filtered by whatman No.1 filter paper. A yellowish brown filtrate (600 ml) was obtained. The yellowish brown filtrate was concentrated to a minimum volume by rotary flash evaporator. An oily viscous mass was obtained.

The crude was subjected to TLC for separating the components present in it to the best possible extent. The minimum of mass was dissolved in a minimum volume of chloroform and was spotted on to a TLC plate. The plates were run at room temperature in a glass chamber containing benzene-ethyl acetate mixture (3:1) gave the best resolution and hence necessitated its use in TLC. The plate was then removed, air dried and placed in iodine chamber. There three spots with corresponding R f values of 0.88, 0.54 and 0.30 were obtained.

Isolation of compound by column chromatography:

exactly 50 ml black pepper fruit extract was percolated through a 39.5×5.5  inch column of alumina and washed with n-hexane first, then benzene : ethyl acetate (3:1). Fractions (20 ml) were collected at a flow rate 4-5 ml per minute, the elution being followed by periodic testing of the eluent by circular paper chromatographic technique using solvent system benzene : ethyl acetate (3:1) and locating the compound by placing the TLC plate in the iodine chamber. The pooled extracts (benzene: ethyl acetate-3:1) containing the expected compound were then concentrated to about 50 ml by rotary flash evaporator and kept in the freezer overnight. The pale yellow crystal was obtained.

TABLE 1: TLC REFLUXING EXTRACT OF BLACK PEPPER AND Rf VALUES OF THE SPOTS

IR Spectra of the compound A2

The IR data of compound (A2) was shown in (Fig.1) and the characteristic peaks with corresponding wave number were presented in Table 2. All of the absorption was expected for molecular structure of piperine.

1H -NMR spectrum of compound A2

1H-NMR Spectrum was recorded in 400MHz spectrometer as showed in Fig. 2. The NMR results again confirmed the purity and identity of the compound and it also indicated nineteen protons within the molecule of which twelve are in aliphatic region. 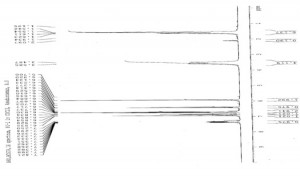 The above signals are similar to the characteristics of piperine as shown in Fig 3. The symbols α, β, γ, δ represents the position of protons in the piperine structures. The 1H-NMR spectrum of the isolated compound did not contain signals characteristics of the geometric isomers of the species confirming the purity of the compound.

Mass spectra of the compound A2: 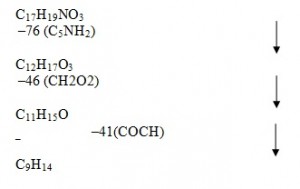 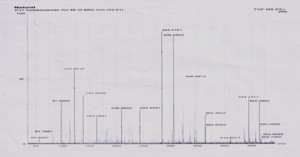 FIG. 4: MASS SPECTRA OF COMPOUND A2

CONCLUSION: For isolation and identification of bioactive compounds of Piper nigrum, we extracted powdered Piper nigrum by soxhlet apparatus using ethanol as solvent. Using TLC and allowing column chromatographic technique, we isolated a pale yellow crystalline compound. It was purified by recrystallization process. Its melting point indicates that it is piperine. Different spectroscopic studies of this compound were carried out. These are Infrared, 1H-NMR and Mass. The IR absorption of this compound indicates that it is piperine. Also all the 1H-NMR absorption for different protons are expected as for piperine. The base peak in mass spectra indicates its molecular weight (m/z 285). Thus we concluded that the isolated compound is piperine. It is an important compound of piperine. Further research work is going on for exploring the bioactivity of this compound on agricultural field particularly as organic insecticide.

ACKNOWLEDGEMENT: We are very much grateful to the research laboratory of Rajshahi University and Bangladesh Agricultural University, Mymensingh and also BCSIR (Bangladesh Council of Scientific and Industrial Research) laboratory, Dhaka for assisting to achieve the goal of this study.