INTRODUCTION: Tithonia diversifolia (Hemsl.) A. Gray (Asteraceae), Mexican sunflower or Mexican tournesol is native to the lowlands of Southearstern of Mexico and Central America 1. The large family of Asteraceae comprising more than 1000 genera and 25000 species 2, 3. Nowadays, it is spread all over the world; it is found in Africa, Central and South America, in Asia and Australia 4.

In Côte d’Ivoire, this fast-growing perennial or annual herb found in dense clumps along roadsides generally. It is a bushy reaching 3m in height, characterized by leaves usually three to five lobed, 15 – 17cm long and 9 – 13 cm wide. Flowers are bright yellow and solitary on the stalks 5, 6.

The infusion of aerial parts of the plant was reportedly used for treatment of malaria 7, 8 while decoction from the flowers, leaves and stem were used to cure hepatitis in Taiwan, Kenya, Thaïland 9, haematomas, measles, skin eczema and gastrointestinal disorders 10-12. In Southwestern Nigeria, the decoction of various parts of this Asteraceae has been used in the amelioration and treatment of diabetes mellitus, sore throat and liver pains 13. Tithonia diversifolia has been exhaustively studied and possesses several biological activities including the following: anti-inflammatory, analgesic, antimalarial, antiviral, antidiabetic, antidiarrhoeal 6, 14-17. This plant is important due to its substantial use within traditional medicine in several countries 18.

The present study reports for the first time, the comparative analyses of the essential oils obtained from Tithonia diversifolia collected from different localities of Côte d’Ivoire.

Aerial part of wild plant of Tithonia diversifolia were collected between January 2008 and December 2010 from different localities of Côte d’Ivoire. Fractions of 500g of fresh vegetal material were submitted to hydrodistillation for 3h using Clevenger apparatus. The oils obtained by decantation dried over anhydrous sodium sulfate and then stored in sealed vial protected from -20°C before gas chromatographic.

Analysis of the Essential Oil:

Compounds were identified by computer search using their mass spectra either with known compounds or published spectra 25 and by comparison of their retention indices with those of known compounds 26.

The factorial discriminant analysis was performed with Xlstat-Pro7.5.2 (Adinsoft, France).

RESULTS AND DISCUSSION: The essential oils from leaves and stems of Tithonia diversifolia were light yellow color with yields of 0.01 – 0.94% and 0.01 – 0.06% (w/w) respectively. Table 1 and 2 show the results of qualitative and quantitative oils analyses listed in order of elution DB5 MS column. In total, 83 components were identified by GC and GC/MS analyses accounting for 93.9–96.7%. 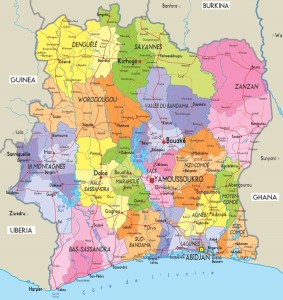 There are 35 monoterpenes hydrocarbons, 5 linear compounds, 48 sesquiterpenes and 5 diterpenes. Although the occurrence of various constituents was observed in all the investigated samples, their proportion varied drastically from sample to sample. The essential oils of aerial part of Tithonia diversifolia are predominated by monoterpene hydrocarbons (2.3 – 96.3%) characterized by α-pinene (0.9 – 89.8%), limonene (0.2 – 65.5%) and (Z)-β-ocimene (0 – 39.3%). Other compounds present at appreciable contents were caryophyllene oxide (up to 22.6%), spathulenol (up to 20.4%), (E)-nerolidol (up to 13.6%), ar-curcumene (up to 11.4%), germacrene D (10.6%), α-copaene (up to 9.5%), thymol (up to 5.7%). It should be noted that the presence of the 3-methyl-2 (2-methylbuthenyl) furan is firstly described in the oil of Tithonia diversifolia when taking account the literature.

All the 27 and 16 oil compositions from leaves and stems respectively were subjected to standard methods of statistical analysis such as hierarchical cluster (HCA,  Fig. 2) and principal components (PCA, Fig. 3). The dendrogram shown in Fig. 2 suggested the presence of two groups within the Tithonia diversifolia leaves essential oils. This partitioning was agreed with the result of PCA, in which the third and five axes accounted for 13% and 7% respectively. Therefore, the mean content and standard deviation of the major constituents were calculated for Groups I and II are reported in table and Fig. 4. 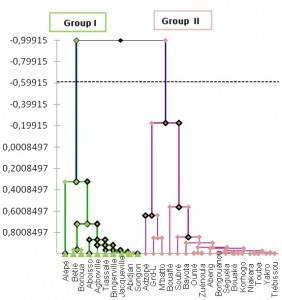 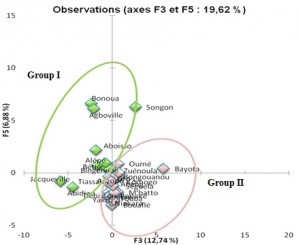 from Bouaflé (Centre-west) was firstly described in the oil of Tithonia diversifolia. 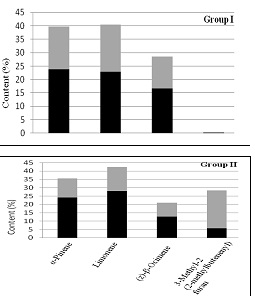 FIG.4: CONTENT OF MAJOR COMPONENTS OF THE TITHONIA DIVERSIFOLIA LEAF-OIL SAMPLES OF GROUPS I AND II.

The dendrogram based on hierarchical cluster (HCA, Fig. 5) has showed the presence of two groups concerning to the 16 stem-oil samples. That confirmed by result obtained from principal components analyses, in which the first two axes accounted for 26 and 14% variability respectively (PCA, Fig. 6). 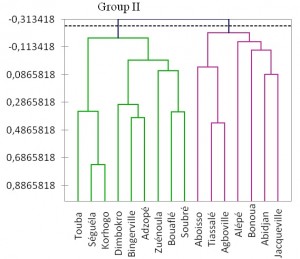 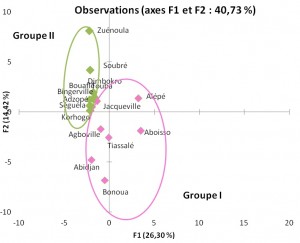 We noted that chemical composition of the two group samples have commonly constituted by α-pinene, limonene, (Z)-β-ocimene, β-pinene and sabinene as major component. The presence of the thymol (aromatic compound) and the spathulenol (oxygenated sesquiterpene) in the first group (samples collected in Sud and Sud-east localities) marked the difference.  We have noted that samples collected in West (Zuenoula, Soubré, Bouaflé) and Nord (Séguéla, Touba, Korhogo) of the country are mainly characterized by monoterpene hydrocarbons (91.5%) namely  α-pinene (59.5 ± 20.0%), limonene (14.0 ± 10.9%), (Z)-β-ocimene (10.3 ± 10.7%) and β-pinene (5.0 ± 3.7%).

According to the literature, there is one report concerning the description of stem-oil of Tithonia diversifolia. The main constituents were α-pinene (61.4%) and β-pinene (11.0%) 18. In effect, it’s important to note that thymol and spathulenol chemotype which are described in our investigation is a significant result for this Asteraceae study. 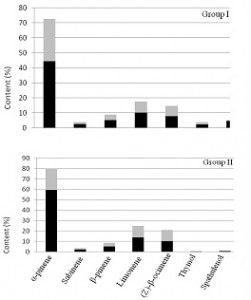 FIG.7. CONTENT OF MAJOR COMPONENTS OF THE TITHONIA DIVERSIFOLIA STEM-OIL SAMPLES OF GROUPS I AND II.

CONCLUSIONS: Chemical composition of essential oils of aerial part (leaf, stem) of Tithonia diversifolia predominated by monoterpene hydrocarbons such as α-pinene, limonene and (Z)-β-ocimene. Nevertheless, spathulenol, (E)-nerolidol, caryophyllene oxide (oxygenated sesquiterpenes) appear in chemical composition of certain samples at appreciable proportion. We also noted the presence of 3-methyl-2(2methylbutenyl) furan as new compound in leaf oil at 94%. Thymol which is also an aromatic compound is present in our samples.

ACKNOWLEDGEMENTS: The authors are grateful to Bénianh foundation its financial support and the Ministère de l’Enseignement  Supérieur de Côte d’Ivoire for providing a research grant to A B. F.