INTRODUCTION:The emergence of bacterial resistance to antibiotics and its dissemination pose serious threads to human beings. One of the field in which nanotechnology find extensive applicants in nanomedicine, an emerging new field which is an outcome of fusion of nanotechnology and medicine. Nanotechnology is expected to open new avenues to fight and prevent diseases using atomic scale tailoring of materials.

Rapid development of Bio-nanotechnology and material research leads to a new way in combating bacteria and searching specific properties of nanomaterials. Nanotechnology can improve our understanding of living cells and molecular level interactions. A number of nanoparticles based therapeutics has been approved clinically for infections, vaccines and diseases 1.

Nanostructured materials are attracting a great deal of attention because of their potential of achieving specific processes and selectivity, especially in biological and pharmaceutical applications 2-4. Gold, silver and copper have been used mostly for the synthesis of stable dispersion of nanoparticles 5, 6. A unique characteristic of these synthesized metal nanoparticles is that a change in the absorbance or wavelength gives a measure of the particle size, shape and interparticle properties 7.

Nanomaterials are called “a wonder of modern medicine”. It is stated that antibiotics kill perhaps a half dozen different disease causing organisms but nanomaterials can kill some 650 cells 8. Among the various metal nanoparticles, silver nanoparticles have received substantial attention for various reason that silver is an effective antimicrobial agent and exhibits low toxicity 9, 10. The application of silver nanoparticles in medical industry as topical ointments to prevent infection against burn and open wounds 11. Silver salts and silver compounds have been used in different biomedical fields, especially in burn treatment 12.

Silver nanoparticles are widely used for its unique properties in catalysis, chemical sensing, biosensing, photonics, electronic and pharmaceuticals 13 and biomedicine especially for antibacterial agent 14 and antiviral agents 15. Silver nanoparticles have a great potential for use in biological including antimicrobial activity 16.

Antimicrobial capability of silver nanoparticles allows them to be suitably employed in numerous household products such as textiles, food storage containers, home appliances and medical devices 17. Silver is an effective antimicrobial agent exhibits low toxicity 18. The antibacterial activity of silver species has been well known since ancient times 19. The most important application of silver and silver nanoparticles is in medical industry such as tropical ointments to prevent infections against burn and open wounds 11.

Our aim in the present contribution was to synthesis and characterization of Ag-NPs by chemical reduction method and to investigate the synergistic effect of Ag-NPs combined with various antibiotics against selected human bacterial pathogens.

Preparation of Silver Nanoparticles: The silver nanoparticles were prepared using chemical reduction method 20. In this method, 150 ml of 1X10-3 M AgNO3 solution was heated to boiling. To this solution 5 ml of 1% trisodium citrate was added drop by drop.  During this process solution was mixed vigorously. Reaction mixture was heated until color change is evident (pale yellow). Then, it was removed from heating element and stirred until cooled to room temperature.

Mechanism of reaction could be expressed as follows:

Where D is the thickness of the nanocrystal, ‘k’ constant, ‘λ’ wavelength of X-rays, ‘β’ width of the half-height of the reflection after correction for the instrumental broadening at Bragg’s angle 2θ,  ‘θ’ Bragg’s angle

Bacterial Cultures: In the present experiment, the following human bacterial pathogens namely Staphylococcus aureus, Streptococcus epidermis, Escherichia coli, Pseudomonas aeruginosa, and Bacillus cereus were grown on nutrient agar plate and maintained in the nutrient agar slants at 4°C. Overnight culture in the nutrient broth was used in the experimental.

Antibacterial Activity of Silver Nanoparticles: The antibacterial activity of synthesized silver nanoparticles was evaluated using the agar-well diffusion method.  Pure cultures were subcultured in nutrient broth for 24hrs at 37°C.  A 20ml volume of the Mueller Hinton agar medium was poured into a petriplate on a horizontally leveled surface. Each bacterial strain was swabbed uniformly into the individual plates using sterile cotton swabs.

Wells of 6mm diameter were made onto each bacterium inoculated agar plates using gel puncture. 100µl of silver nanoparticle suspension was introduced into the corresponding wells using sterile micropipette. The bactericidal activity was determined by a clear inhibition zone around the sample loaded well after incubation the plates at 37°C for 24 hours.

Each strain was swabbed uniformly into the individual plates of Mueller hinton agar using sterile cotton swabs.  Antibiotic discs with and without silver nanoparticles were placed.  Results were recorded by measuring the diameter of inhibitory zone in mm after 24hrs of incubation at 37°C. 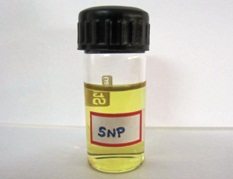 Similarly earlier reports revealed that the intensity of the absorbance was at between 350-450nm 21, 22. 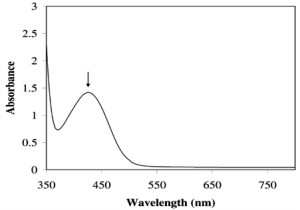 X-ray Diffraction: The intensive diffraction peak at a 2θ value of 38.18° from the (111) lattice plane of face centered cubic (fcc) unequivocally indicates that the particles are made of pure silver.  Three additional bands are observed at 44.32°, 64.50° and 77.05° which corresponds to the (200), (220), and (311) planes of silver respectively is predicted in Fig. 3. The Bragg’s peak position and their intensities were compared with standard JCPDS files.  The result shows that the particles have a cubic structure.  The size of the silver nanoparticles was found to be 25 nm. The observed diffraction pattern coincides with the earlier report 21. 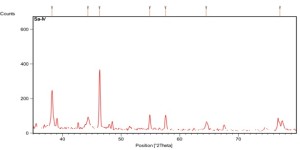 Antibacterial acitivity of Silver Nanoparticles: Silver nanoparticles produced highest inhibition zone against E. coli followed by Staphylococcus aureus, Pseudomonas aeruginosa, Bacillus cereus and Streptococcus epidermis is given in Fig. 5. The recorded zone of inhibition against pathogens was ranged from 10mm to 20mm is represented in Table 1. The cellular membranes in bacterial cells which contain pores in nanometer range. The nanoparticles which have a size less than the pores in the bacteria have a unique property of crossing the cell membrane without any hindrance.

Earlier reports proved that the incorporation of AgNPs into the bacterial cell membrane and make significant changes and damage by formation of pits on their surfaces 10. A bacterial membrane with this morphology exhibits a significant increase in permeability, leaving the bacterial cells incapable of properly regulating transport through the plasma membrane and, finally, causing cell death. Silver nanoparticles exhibited antibacterial properties against bacterial pathogens with close attachment of the nanoparticles themselves with the microbial cells.

The mechanism of inhibitory action of silver ions on microorganisms is partially known. It is believed that DNA loses its replication ability and cellular proteins become inactivated on Ag+ treatment 23. The Ag+ binds to functional groups of proteins, resulting in protein denaturation 24. Inhibition of respiratory process 25 DNA unwinding 26 Inhibition of cell division and damage of cell envelops 27. 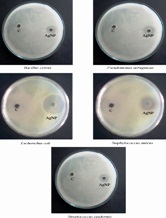 Synergistic Effect of Silver Nanoparticles with Commercial Antibiotics: The combined effect of different antibiotics with and without silver nanoparticles was investigated against gram-positive and gram-negative bacterial strains used in this experiment is shown in Fig. 6.

The zone of inhibition (mm) for all antibiotics has increased in the presence of silver nanoparticles which are given in Table 2-6. The resultant zone was compared with standard chart recommended by NCCLS 28. The maximum fold increase was found while using vancomycin as an antibiotic against P. aeruginosa (66.67%), E.coli (62.50%), S.aureus (46%) followed by rifampicin against B.cereus (66.67%) and kanamycin against S.epidermis (25%). 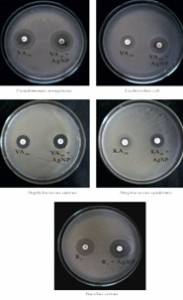 TABLE 2: AVERAGE (MEAN±S.D.) ZONE OF INHIBITION (MM) OF DIFFERENT ANTIBIOTICS WITH AND WITHOUT SILVER NANOPARTICLES AGAINST STAPHYLOCOCCUS AUREUS AS TEST STRAIN

TABLE 3: AVERAGE (MEAN ± S.D.) ZONE OF INHIBITION (MM) OF DIFFERENT ANTIBIOTICS WITH AND WITHOUT SILVER NANOPARTICLES AGAINST Streptococcus epidermis AS TEST STRAIN

TABLE 4: AVERAGE (MEAN±S.D.) ZONE OF INHIBITION (MM) OF DIFFERENT ANTIBIOTICS WITH AND WITHOUT SILVER NANOPARTICLES AGAINST PSEUDOMONAS AERUGINOSA AS TEST STRAIN

TABLE 5: AVERAGE (MEAN±S.D.) ZONE OF INHIBITION (MM) OF DIFFERENT ANTIBIOTICS WITH AND WITHOUT SILVER NANOPARTICLES AGAINST ESCHERICHIA COLI AS TEST STRAIN

TABLE 6: AVERAGE (MEAN±S.D) ZONE OF INHIBITION (MM) OF DIFFERENT ANTIBIOTICS WITH AND WITHOUT SILVER NANOPARTICLES AGAINST BACILLUS CEREUS AS TEST STRAIN

The synergistic effect may be due to certain complex formation which becomes more effective in the inhibition of a particular species of microorganisms either by inhibiting the cell wall synthesis or by causing its lysis or death. In this present evidence to control particular disease, invitro experiments should be carried out various antibiotics combined with silver nanoparticles. The distinct difference was observed between the inhibitory zones produced by dics with and without silver nanoparticles. The diameter of the zone was increased when the nanoparticles were present. This condition may be due to its accumulation in the bacterial membrane.

A membrane with such morphology exhibits a significant increase in permeability, resulting in death of the cell 10. The increase in synergistic effect may cause the bonding reaction between antibiotic and nanosilver. The antibiotic molecules contain many active groups such as hydroxyl and amido groups, which reacts easily with nanosilver by chelation. The AgNPs-ampicillin complex reacts with DNA and prevents DNA unwinding, which results in more serious damage to bacterial cells 29.

These nontoxic silver nanomaterials can be prepared in a simple and cost-effective manner, may be suitable for the formulation of new types of bactericidal materials and may be solve the problem of the emergence of spread of in vitro antibiotic resistance.  Investigations have been carried out on the biological activity of AgNPs; however, the effect of nanoparticles on the activities of antibiotics has not been concluded. The synergistic antibacterial effect with the combination of nanosilver and antibiotics has more potential. Here we present a possible explanation for the enhancement of the synergistic antibacterial mechanism.

This research provides helpful insight into the development of new antimicrobial agents. However, future studies on the biocidal influence of nanomaterial on other Gram-positive and Gram-negative bacteria are necessary to fully evaluate its possible use as a new bactericidal material.

CONCLUSION: Nanobiotechnology is an important area of research that deserves all our attention owing to its potential application to fight against microbes.

In conclusion, the synthesized silver nanoparticles by chemical reduction method are spherical shaped by SEM and the average size about 25nm by X-ray diffraction. We put up an innovation point which is to utilize the synergistic antibacterial effects by screening. We speculate and reported the antibacterial activity of AgNPs over multidrug resistant Gram-positive and Gram-negative bacteria.

This research though preliminary, provides helpful insight to the development of novel antimicrobial nanoparticles. To elucidate the mechanism of the synergistic effect of chemically synthesized AgNP, more elaborate experimental evidences will be needed.