ABSTRACT: In the present study an attempt has been made to explore radiation and cadmium induced histological alterations in mice liver and their modulation by Emblica officinalis fruit Extract (EOE). For this purpose mice were selected from Inbred colony and divided into five different groups. Group: Ι (Sham-irradiated group) considered as normal; II (cadmium chloride treated group) in this group animals were administered 20 ppm cadmium chloride orally as drinking water; III (irradiated group) animals were exposed to 3.5 Gy gamma radiation; IV (Both radiation and cadmium treated group); V (Radiation, cadmium and Emblica treated group) in this group animals were given 1000 mg/kg body wt/animal/day EOE continuously for seven consecutive days, prior to radiation and cadmium chloride treatment and on the 7th day animals were irradiated after 30 minutes of extract administration. The animals from the above groups were autopsied by cervical dislocation after 1, 2, 4, 7, 14 and 28 days and liver were removed and prepared for light microscopy. The liver cells of irradiated and cadmium treated group showed granular vacuolar cytoplasm with pyknotic and crenated nuclei, moderate dilation with most of the compacted hepatocytes, large area of cellular infiltration and hyperaemia of liver sinusoid. In the EOE treated group, the majority of hepatocytes returned normal, although some had still mild changes. After combined treatment of radiation and cadmium the changes were more severe showing synergistic effect. An early and fast recovery was also noticed in the EOE treated animals which may be due to the protection by drug.

INTRODUCTION: In recent time radiation are used as adjuvant or primary therapy in a variety of tumors in the chest, abdomen and pelvis so at present there is hardly any aspect of human welfare in which radiation do not play important role. Therapeutic radiation affects not only malignant tumors but also surrounding normal tissues. Radiations have cytotoxic and immunosuppressive effects. Hence, preventive methods to protect not only human but also plants are necessary. Therefore, herbal radioprotection has been identified as one of the most priority areas of research 1.

Various metals, in trace amount, are essential for proper biological functioning. However, there are many heavy metals that are toxic and exposure to their high intake may result in serious adverse effects on health 2.

In recent years, the concentration of heavy metals increased in the environment 3. Among the important heavy metals cadmium which is a toxic heavy metal ubiquitously present in the environment 4. Due to its non-corrosive nature it has a myriad of uses including electroplating or galvanizing. The major anthropogenic sources which make up for 90 % of cadmium in the environment include smelting operations, phosphate fertilizers, pigments, cigarette smoke, automobiles etc 5, 6.

After absorption, cadmium is transferred by blood to all organs of the body, where a small protein called metallothionein (Mt) with a high binding affinity to cadmium, stores the heavy metals. Cadmium has a half life time of 20-30 years in the human body. The highest concentration of cadmium in the human body (approximately 50%) is found in liver and kidneys because of the high Mt concentration 8. Cadmium has been reported to exert deleterious effects in organisms at low levels of exposure 9.  Cadmium has a high toxicity, because it induces cancer by multiple mechanisms, some of them are induction of oxidative stress, aberrant gene expression, inhibition of DNA repair and apoptosis 10.

Natural herbs are widely consumed by humans on a daily basis; these natural products have many biological and pharmacological properties. Studies carried out in the last 20 years have shown that herbal preparation such as Liv.52, Aloe vera, Mentha piperata, Podophyllum, Ocimum sanctum, Triphala, Rosemarinus officinalis reduced radiation and cadmium induced damage in various Mammal’s body systems 11-18.

One such well known and widely used plant is Emblica officinalis (Amla) belonging to family Euphorbiaceae. The fruit extract of Emblica has been found to inhibit mutagenicity induced by metals such as cadmium 19. It has also been reported to have potent antidiabetic, hepato-protective and antibacterial 20-23 properties owing to its antioxidative nature. It is believed that major constituent responsible for these activities is vitamin C (ascorbic acid). Ascorbic acid shows anti-oxidant, anti-inflammatory and anti-mutagenic properties 24. It is very effective free radical scavenger. However, there are some in vivo studies indicating that antioxidant activities of Amla cannot be attributed to ascorbic acid alone and overall effect is due to other polyphenols such as ellagic acid, gallic acid and tannins etc 25, contributing its pharmacological potential 26.

Liver is selected as a testing organ because some scientists reported it as highly radiosensitive 27 and an important metabolic organ. Any damage to this organ may cause serious disorders in the form of various diseases, which can be observed in the form of histopathological and biochemical lesions. The combined treatment of radiation and cadmium may cause additive effect in comparison to their individual effect. The Emblica may protect from the toxic effect caused by both the agents. Therefore, the present study aims to evaluate the beneficial effect of Emblica officinalis against histopathological changes induced by cadmium and sub lethal dose of γ-radiation in the liver of Swiss albino mice.

Animal care and handling: The adult healthy male Swiss albino mice (6-8 weeks old) were procured from Lala Lajpat Rai University of Veterinary and Animal Sciences, Hissar. The animals were kept in polypropylene cages and maintained on balanced mice feed and tap water ad libitum. They were acclimatized to laboratory conditions before use. The temperature of the room was maintained between 22-27ºC with the 12 h light/dark cycle. Animal husbandry and experimentation were consistent with the Committee for the Purpose of Control and Supervision of Experiments on Animals (CPCSEA), Chennai (registration no. 1066/ac/07) and in accordance with protocols approved by Institutional Animal Ethics Committee (IAEC) of the Govt. Dungar College, Bikaner.

Whole-body irradiation was performed using a Cobalt-60 gamma radiotherapy source (Theratron) of AECL make, obtained from Canada. This facility was provided by the Radiotherapy Department of Prince Bijay Singh Memorial Hospital, Bikaner (Rajasthan). The animals were irradiated to a single dose of 3.5 Gy at the dose rate 0.85 Gy/min. The dose was calculated at the midpoint by multiplying dose rate and tissue air ratio. The tissues of Swiss albino mice were assumed to be equivalent to human soft tissues.

Cadmium in the form of inorganic cadmium chloride, obtained from S. D. Fine Chemicals Limited, Boisar, Mumbai (India) was used for present study. The dose 20 ppm was selected for the present experiment. For this purpose aqueous solution of cadmium chloride was prepared by dissolving 20 mg of cadmium chloride in 1000 ml of the glass distilled water, thus giving a concentration of 20 ppm and then administered orally as drinking water 12.

Fresh fruits of the Emblica officinalis were cleaned, cut into small pieces, air dried, powdered and extracted with double distilled water (DDW) by refluxing for 36 hrs. (12 hrs. x3). The extract thus obtained was vacuum evaporated so as to make it in powder form. The extract was re dissolved in DDW just before oral administration. An approximate 38 per cent yield of the extract was obtained. The drug was given orally at the dose rate of 1000 mg/kg body wt. / animal / day from seven days prior to cadmium chloride treatment or irradiation. The EOE dose was selected on the basis of dose survival essay as described previously 12.

Experimental design: The animals for this experiment were divided into five groups:

After sacrificing the animals the liver was taken out, fixed in Bouin’s fixative for 24 hours. After fixation, the tissues were washed in water to remove excessive of fixative, dehydrated in graded series of alcohol, cleared in xylene and embedded in paraffin wax blocks. Sections were cut at 5 mm and slides were prepared then stained in Harris haematoxyline and alcoholic eosin for histological studies. Histological sections were examined by light microscope and photographed at a magnification of 400X. 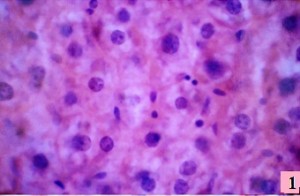 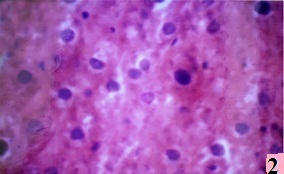 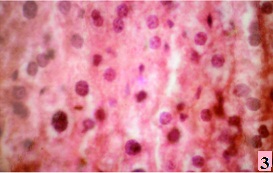 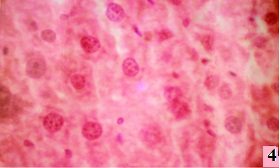 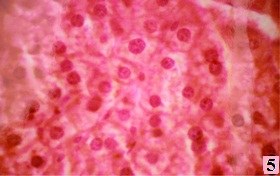 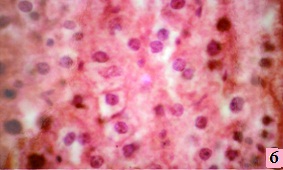 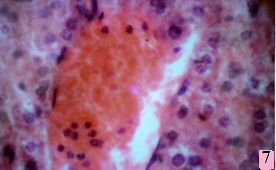 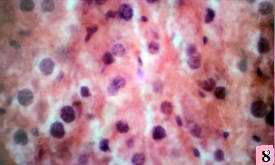 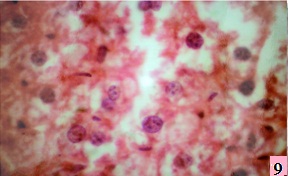 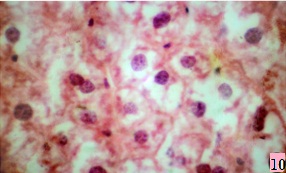 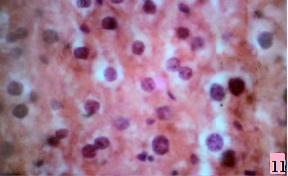 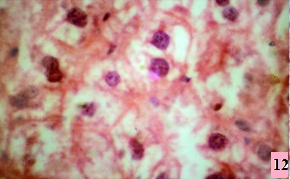 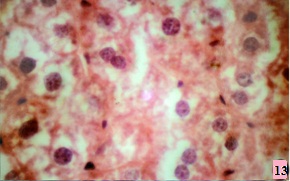 The present study revealed that cadmium chloride and radiation exposure induced histopathological alterations in liver of Swiss albino mice. The liver of mice exposed with only cadmium chloride (group II) exhibited several histological alterations like distortion of hepatocytes with pycnotic nuclei, karyolysis, enucleation in few cells, development of vacuoles in cell cytoplasm with dilated central vein, masses of leukocytic infiltration (Fig.2-4) these finding are in accordance with previous studies 18, 28.

It has been observed that liver injury after cadmium chloride is followed by recovery, which is probably due to insufficient concentration of cadmium with in liver (Fig.5). The observations support the theory implying when cadmium is accumulated in large doses, stress response proteins are produced such as metallothionein, glutathione and heat shock proteins. These proteins are responsible for the adap­tation of the human cells to low and repeated doses of cadmium.  Metalothionein has binding affinity to cadmium as well as to the oxidative products of cadmium.  The Glutathione and catalase are the most antioxidant molecules which play major role in the detoxification of cadmium and ROS and finally heat shock proteins as another class of stress response proteins 10.

Ionizing radiation is known to induce oxidative stress through generation of ROS resulting in an imbalance in pro-oxidant, antioxidant status in the cells 29. When radiation is absorbed by a living cell, the primary damage is caused by ionization and excitation of the atoms and molecules of that cell resulting in changes in cellular structure, damage to essential constituents, and observable biological injury 30. Numerous attempts have been made to investigate different means for controlling and protection from radiation hazards using chemical, physical and biological means.

The liver histology of the irradiation-only (group III), however, showed hepatocytes oedema, inflammatory cell infiltration and focal areas of necrosis (Fig. 6, 7). The present finding also supported previously study 31. It is clear that histological alteration by combined treatment of radiation and cadmium, induced more severe changes as compared to individual with synergistic effect in group IV (Fig.9, 10), these finding conform the results of other scientists 32. The same result also observed in mouse testis 33.

Cadmium is quite enough for interaction with ionizing radiation, because it has high affinity for –SH and disulphide groups of proteins 34. Besides this, cadmium binds with thiol groups of the cellular components, which are mainly responsible for protecting repair system against damage caused by radiation induced free radicals 35. Due to the indirect effect of radiation, free radicals are formed which are scavenged by –SH groups, an inherent protective mechanism present in the cells. When cadmium is simultaneously added to radiation, these   –SH groups are not available for protection because cadmium binds with them. Due to this, DNA is exposed to these free radicals and the risk increases during the combined exposure.

The present results also showed that EOE ameliorates the injuries induced by γ-radiation and cadmium. The EOE treated mice in group V showed pronounced recovery at day 7, which manifested in the form of normal cord like appearance of hepatocytes and their normal structure but lymphocytic infiltration, increased binucleated hepatocytes, mild cytoplasmic vacuolation and kupffer cell population was still noticed (Fig.11-13). This may be due to antioxidants present in EOE which help in decreasing the genotoxicity created by toxicant and also inhibit mutagenesis and carcinogenesis 19, 36. These are in accordance with studies which come to the fact that the imbalance in antioxidant status in the cells as a result of ionizing may be ameliorated as result of administration of EOE 25, 37. EOE significantly restored the antioxidant enzymes Superoxide Dismutase (SOD), Glutathione Peroxidase (GSHPx), and Glutathione Reductase (GR); Reduced Glutathione (GSH); and decreased levels of the lipid peroxide Malondialdehyde (MDA) in hypertensive patients 38, 39. EOE was found to have a favorable effect in reducing MDA levels and increasing GSH levels in coronary artery disease in postmenopausal women 40, 41. EOE has also been found to inhibit proliferation of several types of cancer cells 42.

CONCLUSION: These observations show that pre treatment with Emblica protects from gamma radiation and cadmium induced histological alteration in mice liver. It may be concluded that natural antioxidants and free radicals scavenging agents in Emblica might be effective during therapeutic implications and can be given to cancer patients during radiotherapy.