It is well known fact that the right drug delivery system is
critical to the success of a pharmaceutical product. A novel drug delivery system creates additional patient benefits that will
add new competitive advantages for a drug and, thus, conserve or increase revenue. Chewing gum as drug delivery system holds tremendous potential not only in smoking cessation and oral health care arenas but also in other indications

INTRODUCTION: Man has experienced the pleasure of chewing gum since ancient times. One thousand years ago, the Mayan Indians chewed tree resin (chicle) from the sapodilla tree in order to clean their teeth and fresh their breath. Later on, the tradition was passed on to the white colonists. The first commercial chewing gum appeared in 1848, and the first patent on chewing gum was taken out in 1869. Shortage of natural gum bases during World War II enhanced development of the synthetic gum bases used today. The first medical chewing gum, Aspergum, was launched in 1928. This chewing gum is still available and contains the analgesic substance acetylsalicylic acid known from Aspirin tablets. Another commercially available medical chewing gum is dimenhydrinate-containing chewing gum for motion sickness. However, chewing gum did not gain acceptance as a reliable drug delivery system until 1978, when nicotine chewing gum became available. Today 1, 2, 3, chewing gum is highly accepted as a drug delivery system, especially in smoking cessation. All major pharmaceutical suppliers of nicotine products market a chewing gum formulation. Furthermore, chewing gum plays an important role in dental health, and chewing gum containing e.g. fluoride or carbamide is available worldwide.

There are many reasons for selecting the chewing as a drug delivery system, the following are the some reasons highlighted.

The Composition of Chewing Gum: A piece of chewing gum usually consists of a gum core, which may or may not be coated. The core is composed of an insoluble gum base (resins, elastomers, emulsifiers, fillers, waxes, antioxidants and softeners), sweeteners, flavoring agents, and in the case of medical chewing gum, active substances. The coating may be composed of e.g. sweeteners, flavors, coloring, and active substances (fig. 1). 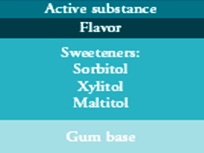 Manufacturing of Chewing Gum: The manufacturer of Chewing gum begins with the preparation and mixing of the gum base materials. The gum base is first ground and then melted using steam under pressure. Then centrifuging purifies the sterilized gum-base then sieved with fine mesh screens. In this state the mixture resembles thick syrup. The next step in chewing gum manufacture is addition of the sweeteners and the flavoring agents. These ingredients are placed together I huge mixing kettles having capacity of about 455-910 kg. The mixing is continued till the mass shows consistency of bread dough. Then this mass is kneaded and passed through a series of rollers and gradually reduced to a long flat continuous, ribbon of about 50 cm width. Then the ribbon is scored and sticks of desired size separated and wrapped in suitable material for packing. Thus the chewing gum formulation contains the following components 11, 12:

The percentage of gum base varies from 30-60% depending upon the base used and its properties A flavoring agent is included to make it more palatable.

Gum bases used in chewing gums: From ancient time natural gums are used. The most popular gum base used is "Chicle".

CMD: Chicle is natural latex obtained from the Sapodilla tree The latex is obtained from 'V shaped cuts made on the trunk of the tree the cuts are made about 30 cm a part from the side of trunk until the lowest branch is reached. Generally, the tapping cuts are destructive to the tree. In addition to vvoundine the bark and wood the cambium is also injured thus retarding the growth of new wood and bark. After cuts are made, the gum that oozes out is collected and processed for further purification till a desired consistency is obtained. latex collected is dried carefully to remove excess water crude. Chicle is purified by repeatedly washing with strong alkali and then neutralizing with sodium acid Phosphate followed by drying and powdering. The resultant powder is insoluble, amorphous powder which softens on heating.

The gum bases usually adhere to dental surfaces. Adhesion and deletion of some ingredient in the composition is there of needed. In U.S. patent No. 2,076, 112 the use of talc as anti sticking agent is described 13. Tannic acid is also another anti sticking agent 8. The polymer can be used along with polyisoprene or styrene butadiene copolymer 14. The use of titanium dioxide along with fillers such as calcium carbonate is also reported to produce non sticky gum 15. Yet another attempt to produce non-sticky bubble-gum is claimed with polyvinyl acetate, polyvinyl alcohol along with an elastomer and oleaginous plasticizer an elastomer solvent fatty acid and other 16. U.S. Patent No. 4, 387, 108 which is directed to a non-sticky chewing gum has the following composition (Table 2).

Indian patent No. 161215 discloses the process for manufacture of non-sticky chewing gums (Table 3).

Indian patent No. 160941; discloses the process for manufacturing non caloric, non carcinogenic chewing gum. The composition has employed Aspartame as sweetener 17, 18. Thus the manufacture of chewing gum has been under going tremendous innovative changes and the general procedure can serve as guidelines only. The manipulations in the processes and the composition can be made according to the desired properties of the resultant product. The process should therefore not to be absolutely and blindly followed but to be used as guideline only. Modifications based on the general principle are always permissible. The chewing gum industry is still undergoing many changes and every year newer formulations are being tried and few of them proved successful.

Rosin: Apart from conventional gum-bases now-a-days, rosin derivatives are being tried as the gum base for chewing gums. Rosin is a solid, resinous material find as oleoresin of Pine trees. It is obtained from three major sources:-

Rosin grades and test: The Indian standards Institution has graded rosin into color grades as X, WW, WG, N, M,K,D. The specifications for these grades are given below in table 4:

The acids are of two types:

Derivatives and reactions 19, 20: Various reactions of rosin acids are given below (Table 5).

The carboxylic group of rosin acid is attached to a tertiary carbon atom and is highly hindered. Therefore, more drastic conditions such as high temperature are required for carrying out the esterification (table 6).

Rosin is conventionally used in the manufacture of printing inks lionleum, varnishes and electrical insulators. The main usage of rosin derivatives is:

It is also used in textile industry as wetting and emulsifying agents 15, adhesive, water-proof coating on fruit packages. Chewing gum bases 16, preservatives, elastomers for pharmaceutical plasters and it is also reported to posses bacteriostatic properties. The rosin - glycerol esters and rosin- esters with mannitol are found to be useful as coating materials.

Composition: Shellac is a refined natural product. The main component (about 95%) of shellac is resin which on mild basic hydrolysis gives a mixture of aliphatic and alicyclic hydroxy acids. The composition of the hydrolysate is variable, but in general there are about 50% aliphatic and 5-1.0% of alicyclic acids. Aleuntic acid and shellac acid are the major aliphatic and alicyclic components respectively. Shellac also contains about 5-6% was and a small amount of pigment.

Commercial availability: Many different grades of shellac are available. The main division is into orange shellac and bleached. Shellac whereas the latter can be further divided into regular bleached shellac and refined (Wax Free) bleached shellac; there are many grades of orange - shellac which differ in color, insoluble matter and details of the extraction process used. Shellac can also be obtained commercially in pharmaceutical grades in which the appropriate grade of shellac has been dissolved in ethanol. Specifications for shellac are given below (Table 7).

Oral infections caused by bacteria or fungi are often seen, especially in patients with impaired immune system. Chlorhexidine chewing gum can be used for alleviation of gingivitis, periodontitis, and other oral and pharyngial infections 25, 26. It can also be used for inhibition of plaque growth and has proven valuable in oral health care of the elderly. Furthermore, chlorhexidine in a chewing gum formulation gives less staining of the teeth and is more convenient to use than a chlorhexidine mouth rinse.

The chlorhexidine released by chewing is distributed evenly in the oral cavity and is present there for a prolonged period of time. The bitter taste of chlorhexidine can be masked quite well in a chewing gum formulation Clinical trials involving patients with oral candidosis have shown that miconazole chewing gum is at least as efficient as miconazole oral gel in the treatment of fungal infections in the mouth. Furthermore, patients preferred chewing gum to oral gel due to convenience and fewer side effects. A miconazole chewing gum is yet to be launched.

Several chewing gum formulations containing calcium are available on the market. Adolescents constitute a potential target group for a calcium chewing gum, as the calcium intake of young people is often very low. Calcium chewing gum with a pleasant taste is an attractive and convenient alternative to tablets.

Limitation of Chewing Gum as a Drug Delivery System:

Marketed Products of Chewing Gum as a Drug Delivery System: Man has a habit of chewing the chewing gum since ancient times. Today it is one of the most popular dosage form, used for delivering the many active components 34, 35. Most of the chewing gum were used for smoking cessation (containing the nicotine) and also used for oral and dental hygiene (consisting of fluoride and carbamide etc). Some marketed products of chewing gum are (Table 8) as follows:

Future Prospects of Chewing Gum as a Drug Delivery System: Previously, chewing gum was mainly considered a confectionery product, however, fluoride chewing gum, and especially nicotine chewing gum which was launched in the 1970s, paved the way for a more general acceptance of chewing gum as a drug delivery system 36. Inclusion of medical chewing gum in the European Pharmacopoeia (under medicated chewing gum) in 1998 has further contributed to full acceptance. Medical chewing gum meets the high quality standards of the pharmaceutical industry and can be formulated to obtain different release profiles of active substances, thus enabling distinct patient group targeting. A few decades ago, the only treatment for some diseases was surgical procedures (e.g., gastric ulcers), however, today more and more diseases are treated by medication 37. This trend is likely to continue as sophisticated research methods allow the development of medication for an increasing number of diseases. At the same time there is a demand for efficient and convenient drug delivery systems. Generally, it takes time for a new drug delivery system to establish itself on the market and gain acceptance by both professionals and patients.