ABSTRACT: One of the obstacles to effective intratumoral gene delivery lies in low transfection efficiency of non-viral vectors. Thus, in this study we evaluate the application of Diethyl methyl chitosan (DEMC) in intratumoral gene delivery of pancreatic cancer. DEMC/ pEGFP nanoparticles are prepared by polyelectrolyte complexation. After nanoparticle characterization via atomic force microscopy (AFM), in in vivo experiments, nude mice are subcutaneously injected with AsPC-1 cell line and the created tumors are used to determine the effect of DEMC on i.t. gene delivery via fluorescence microscopy, flow cytometry and immunohistochemistry. Also the relation between tumor-injection volume ratio (TIVR) and percent of the transfected tumor cells was predicted via mathematics. Relative to the control, which is injected with plasmid alone, there is a transfection increase up to 15- folds with DEMC. This delivery system involves simple preparation procedures and can be injected directly into the site, hence should be a useful approach to plasmid-based gene transfer for pancreatic cancer local therapy.

INTRODUCTION:Intratumoral polymer implants have been developed to release a variety of anticancer agents for the localized therapy of pancreatic cancer. Combining anticancer agents into an implantable delivery system has these advantages: modify drug biodistribution, reduce drug toxicity and improve therapeutic efficacy.

There is also a possibility of immobilizing novel pancreatic cancer treatments, i.e. genes, viruses and cellsinto polymers without the loss of biologicalactivity 1.

Chitosan/DNA nanoparticles containing inter leukin- 1 receptor antagonist (IL-1Ra) or IL-10 gene were injected directly into the knee joint cavities of osteoarthritis rabbits by Zhang et al 12.  The results showed that clear expression of IL-1Ra was detected in the knee joint synovial fluid of the chitosan IL-1Ra-injected group, whereas no expression was detected in the chitosan IL-10-injected group, indicating that the transfection efficiency of chitosan/DNA nanoparticles was closely related to the type of gene product. Yoo et al injected CGC/DNA nanoparticles into a left thigh of female BALB/c mice 13. The results indicated that the expression of luciferase gene gradually increased with an increase of hydrophobic contents in chitosan owing to compact nanoparticles.

So because of the advantages of chitosan and its derivatives, including: permeation enhancing effect, enzyme inhibitory capabilities and mucoadhesive properties for peroral peptide delivery systems, they could also be used for GI related cancers including pancreatic cancer 14. For this proposes and because there is a need for ionic vectors for intratumoral drug/gene delivery, we introduce another cationic chitosan based polymer, Diethyl methyl chitosan (DEMC), as an injectable intratumoral gene delivery system.

DEMC was synthesized by partial quaternization of chitosan as described by Avadi et al respectively 15. It was complexed with pEGFP (Enhanced green fluorescent protein plasmid), as a model plasmid. The complex was evaluated in vitro and in vivo.

Plasmid preparation: Briefly, after thawing Escherichia coli (DH5α), it wasaliquot into pre-chilled microfuge tubes.  Plasmid was added to cells and mixed. DH5α / plasmid mix were incubated on ice and heat shocked at 45oC. Liquid broth (LB) was added to the cells with shaking and then centrifuged. Transformed cultures were plated on LB containing ampicillin and incubated for 12-16 h. Cells were mixed with LB containing ampicillin and gently mixed at 37oC. After 16 h the transformed bacteria were centrifuged and the plasmid was isolated via Plasmid Miniprep Kit. The Plasmid concentration (7kbp) and purity were determined using BioPhotometer Eppendorf (Hamburg, Germany) and electrophoresis on 1.5% agarose gel. The gels were stained with ethidium bromide (10 µg/mL) and photographed on a UV transilluminator (Uvidoc, Bridgeville, UK).

Preparation and characterization of polyplexes for tumor transfection: DEMC was diluted to the respective concentration in serum free cell culture medium. To mimic conditions after polyplex formation and after addition of polyplexes to cell culture media, size and zeta potentials were determined in RPMI. DEMC-plasmid complexes were prepared by addition of the respective polymer solution to an aqueous solution containing pEGFP at N/P ratio of 10.

The solutions were pippeted gently and shaken at 250 rpm for 30 min at room temperature. Surface morphology and size of the optimized N/P ratio of polyplexes was analyzed by atomic force microscopy (AFM). Silicon chips were used as sample support. Samples were investigated within 2 hours after preparation. Commercial silicon nitride tips were used. The zeta potential of the nanoparticles was measured using Malvern Zetasizer (3000HS, UK).

Tumor induction and intratumoral injection of polyplexes in nude mice: Following approval on animal experiments(Nude mice laboratory, Emam Khomeini hospital, Tehran, Iran), 6-8 week old nude mice were used in this study. For tumor induction in mice,AsPC-1 cells were seeded in flasks and cultured at 37oC in a humidified atmosphere of 5% CO2 and 95% air. The cells medium was RPMI 1640 supplemented with 10% FBS. The cells were used at 70% confluency 24 h post-seeding.

Prior to injection, culture medium was removed and the cells were rinsed with phosphate-buffered saline (PBS, pH 7.4) then trypsinized with 0.25% trypsin–EDTA and once detached, complete medium was added to inhibit trypsin. Cell suspensions (6×106) were injected subcutaneously in to the muscle of BALB/c nude mice (Six-eight-week-old male (25±5 g) nude mice). After 3 weeks the tumors were created.After tumor induction, the prepared nanoparticles were injected i.t. (× 3). The control mouse was injected with10 µg plasmid dissolved in RPMI 1640 (cell culture medium).

RESULTS: The DEMC-DNA nanoparticles were prepared at N/P ratio of 10 were stable, according to gel electrophoresis, and proved to result in the optimum nanoparticles with positive surface charge of +8.81±0.56 mv.17

Figure 1 displays the AFM image of plasmid/polymer polyplexes. One can clearly see that DNA is aggregated and the complex appears globular structure. The mean diameter is 200.68 ± 14.53 nm, and the average is; 53.92 ± 7.20 nm. 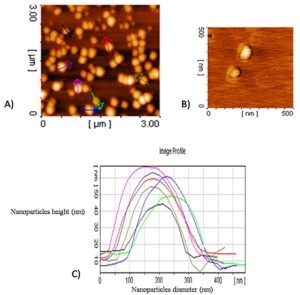 Figure 6 confirms the tumor tissue with anaplastic cells displaying marked pleomorphism (i.e., marked variation in size and shape). It also demonstrates the IHC results and the transfer of GFP by antibody staining followed by peroxidase-DAB. 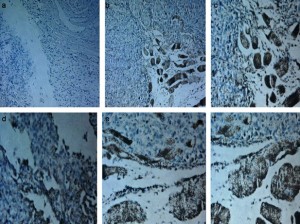 DISCUSSION: The DEMC-DNA nanoparticles were formed as a result of polyelectrolyte complexation between the positive charge of DEMC and DNA. The cationic characteristic of this chitosan derivative is a crucial parameter for the complex formation with DNA bearing negative charges.

The biological results showed that charge ratio of 10, due to its highest cell viability, can be chosen for intratumoral gene delivery to pancreatic cancer cells as presented previously 16. To estimate approximately the number of DNA molecule encapsulated in one globule, a quantitative analysis as proposed by Wen Guang Liu et al is used 17:

The total volume of the globule is calculated in terms of the volume of spherical cap:

The total volume of DNA is;

Where n is the number of base pairs, and l, the distance between two neighbouring base-pair, is equal to 3.4 Å. The number of DNA molecule contained in one globule is

From the above formula, a single globule consists of approximately 223 DNA molecules, which is shielded by DEMC.

The results show that, at TIVR= 0.7, 3%, at TIVR= 0.42, 15% and atTIVR= 0.28, 18% of the tumor cells are transfected. This effect can be explained by the fact that positive surface charged polymers allows better uptake across the cell membrane. According to Shulin et al regarding studies in delivery of plasmid DNA into tumors via electroporation, high level of gene expression is associated with a TIVR between 0.14 and 0.36 and a ratio less than 0.1 or more than 0.5 will yield a low level of gene expression 18.

Comparing these two studies, the results in our study is similar to the obtained results in electroporation method. Relative to the control which was injected with plasmid alone, with TIVR=0.93, 1.17%cell transfection, there was a transfection increase up to 15- folds with DEMC.

Also the IHC analysis demonstrates the expression and gradual accumulation of GFP in the Aspc-1 cells. Specific, dark brown DAB label indicates transfer of pEGFP by the vector.

As stated in our previous article 16, interpolations polynomial approximates the functions. In numerical analysis, a Lagrange polynomial is the interpolating polynomial for a given set of data points in the Lagrange form. If the TIVR and transfection data are given in k+1 points then the interpolation formula of Lagrange can be described as follows (Berrut and Trefethen, 2004):

As seen in Figure 7, it is predicted that at TIVR between 0.28 and 0.7 transfection decreases by increase in TIVR. It is clear that more studies on route of intratumoral environment and nanoparticles uptake are necessary to fully understand the gene delivery process via DEMC/plasmid complexes to pancreatic tumor cells and explain the predicted results of presented mathematical model. 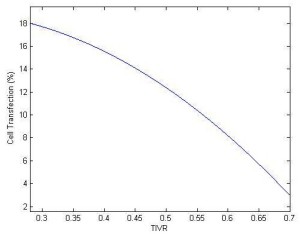 The approach presented in this paper has several advantages over existing systems:

(1)   It is easy to administer and avoids surgery;

(3)   The fabrication process is simple and does not require toxic solvent and high shear force;

(5)   The ability to inject the DEMC/plasmid complex makes it a reproducible tool for direct gene delivery to smallor irregular shaped body cavities.

CONCLUSION: We introduced an intratumoral injectable system based on a quaternized chitosan derivative, Diethyl methyl chitosan (DEMC), for pEGFP delivery to pancreatic cancer tumor in nude mice. Because of its easy, safe preparation, this delivery vector can be useful in delivering small amounts of pancreatic cancer’s new treatments. These treatments include vectors combining the heat shock proteins (HSPs) promoter with the catalytic subunit A of the diphtheria toxin (DTA) or its variants which were engineered to investigate the effect of bacterial toxins, with lethal effects, on pancreatic cancer cells 19. Considering the advantages of this delivery system, it should be a useful approach to plasmid-based gene transfer for pancreatic cancer local therapy.

ACKNOWLEDGEMENTS: The authors would like to acknowledge the Stem cell technology institute (Tehran, Iran) for generous use of equipment and materials.