ABSTRACT: The present study deals with investigating the effect of chitosan nano particles as carriers for an anticancer drug curcumin. The chitosan-curcumin nanocapsules were prepared in the presence and absence of gold nanoparticles via solvent evaporation method. Scanning electron microscopy and transmission electron microscopy was done to characterize the drug entrapped nanocapsules. The average diameter of gold nanoparticles was found to be in the range of 18-20 nm and size of the nanocapsules was found to be in the range of 200-250 nm. Fourier transform-infrared analysis revealed no possible interactions among the constituents with the chitosan nanoparticles. The controlled drug release of anticancer drug entrapped nanocapsules was carried out in 0.1M HCl and 0.1M phosphate buffer (pH 7). Experimental studies revealed that curcumin encapsulated chitosan with gold nanoparticles was controlled and steady when compared with curcumin encapsulated chitosan nanoparticles. Application of in vitro drug release date to various kinetic equations indica

INTRODUCTION: The field of nanoscience has undergone enormous changes over the last two decades and the very potential development is nanomedicine.  Nanomedicine is the latest advancement which the world has seen the nanoparticles being the prime part of therapeutic and diagnostic agents. The advancement of this proportion depends on the ability to produce nanoparticles in suitable size and shapes thus extending its domain to sensors, computing and other biomedical applications.

Biodegradable polymers find a pivotal part in today’s advancement of drug delivery as they can be degraded to non-toxic monomers inside the body. The second most abundant natural biopolymer available on earth is chitin. Chitosan is a natural nontoxic polymer derived by the deacetylation of chitin. Chitosan (C6H11NO4) a linear polysaccharide polymer and a water soluble polymer is one such polymer and therefore used in number of biomedical uses 3, 4. Chitosan causes the fine sediment particles to bind together.

In order to minimize toxicity in drug delivery application a promising field has been wide opened by nanotechnology called targeted drug therapy which is hugely strengthened by gold nanoparticles as it is non-toxic to human cells and biocompatible 5, 6.

Dating to ancient days of Roman Empire where gold nanoparticles were used as aesthetic agent it has turned in to a very versatile one. The latest foray is in to cancer therapy where its property of non-toxicity towards human cells has made it possible.

Curcumin (C21H20O6 ) is the principal curcuminoid of the popular Indian spice turmeric. Curcumin's antioxidant 7, anti-inflammatory 8-10, anticarcinogenic  and antimicrobial 11, 12 properties, and on its use in cardiovascular disease  has enabled it to be in the limelight as a promising  therapeutic agent, and is currently in human clinical trials for a variety of conditions, including multiple myeloma, pancreatic cancer, colon cancer 13-15.

Hence, an attempt was made to synthesize curcumin encapsulated chitosan nanocapsules in the presence of gold nanoparticles for controlled and sustained drug release applications. From the in-vitro release data, their kinetic studies were also carried out for various models.

Materials: Chitosan was purchased from Sigma Aldrich Ltd. Curcumin and other chemicals like HAuCl4 (Chloroauric Acid), Na3C6H5O7 (Sodium citrate) and Sodium tripolyphosphate Na5P3O10 (STPP) used in the studies were purchased from Himedia Laboratories and Fine Chemicals. All chemical reagents were prepared with double distilled water.

Apparatus: Samples were characterized by UV-vis spectrophotometry (Perkin-Elmer Lambda 25).The path length was 1 cm and matched 1cm x 1cm cuvettes were used. HR-TEM was undertaken employing a JEOL instrument with an accelerating voltage of 120 KV. FTIR spectroscopy was performed using a PE IR SPECTRUM ASCII PEDS 1.60 spectrometer and samples were presented as KBr pellets. Spectra were acquired at room temperature at resolution of 4 cm-1. A JEOL JSM-6360 field emission scanning electron microscope was used and the samples were prepared by coating gold on the surface of the sample for SEM measurements.

Preparation of Citrate -capped Gold Nanoparticles: 5.0X 10-6 mol of HAuCl4 was taken, dissolved in 200 ml of distilled water. The faint yellowish solution was heated until boiling, while 1ml of 0.5% sodium citrate solution was added under vigorous stirring. It was stirred for the next 30 minutes. The color of the solution gradually changed from faint yellowish to wine red. Water was added to the solution to bring the volume back up to 200 ml. It gives a characteristic absorbance at 526 nm in the UV-Vis spectrum.

Preparation of CC Nanocapsules: 400 mg of chitosan was dissolved in 200 ml of acetic acid (Chitosan – Acetic acid ratio, 2:1). The above solution was neutralized with the 10 N NaOH to obtain the pH level of 6 for strong binding. 100 mg of sodium tripolyphosphate was dissolved in 100 ml of the acetic acid. Ratio for acetic acid and sodium tripolyphosphate is 1:1.    3 ml of the Chitosan – Acetic acid solution was added to the above Solution. 30 mg of Curcumin was added to the above solution and was kept in magnetic stirring for 5 hours and then centrifugation was done for 20 minutes in 9000 rpm. Then the product was dried in hot air oven and dried sample was stored in a vial.

Preparation of CCG Nanocapsules: 400 mg of chitosan was dissolved in 200 ml of acetic acid (Chitosan – Acetic acid ratio, 2:1).  The above solution was neutralized with the 10 N NaOH to obtain the PH level of 6 for strong binding. 100 mg of sodium tripolyphosphate was dissolved in 100 ml of the acetic acid. Ratio for acetic acid and sodium tripolyphosphate is 1:1.    3 ml of the Chitosan – Acetic acid solution was added to the above Solution.  30 mg of Curcumin and 5 ml of Gold nano solution was added to the above mixture and was kept in magnetic stirring for 5 hours and then centrifugation was done for 20 minutes in 9000 rpm. Then the product was dried in hot air oven and dried sample was stored in a vial. 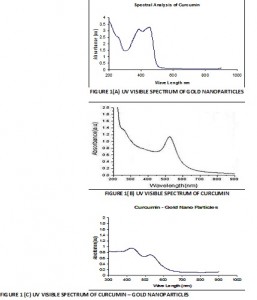 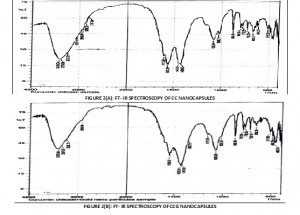 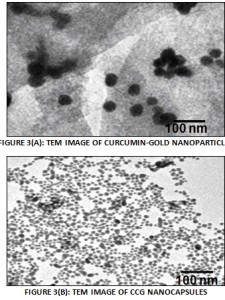 Figure 4(b) represents the SEM images of CCG nanocapsules with smooth surface and the shape of the nanocapsule was found to be spherical. 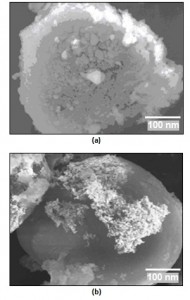 Drug Release Profile: The drug release profiles of Curcumin from CC and CCG nanocapsules in the hydrochloric acid (0.1 M) and the phosphate buffer saline (pH 7.0) were shown in the Figure 5 and 6 respectively. Desorption profiles were obtained as follows;

0.005 gram of drug encapsulated polymer nanoparticles were mixed with 10 ml of phosphate buffer solution and HCl solution. The absorbance of each solution was monitored in different time. One sample solution was used only once so that there was no change in the concentration of the solution. The intensity of absorption was plotted against time which gave the desorption profile of Curcumin.

Furthermore, the release rate of CCG and CC in basic medium is high compared to acidic medium because of solubility characteristics of dissolution medium. 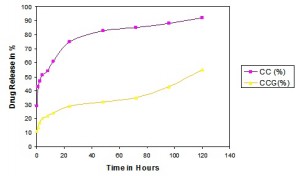 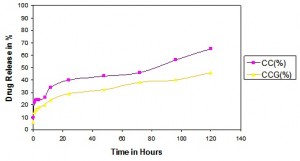 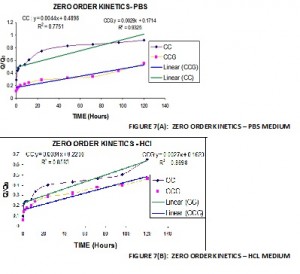 Due to the lack of linearity of these curves from the Figure 8(a) and (b) it precluded the possibility of first order kinetics. 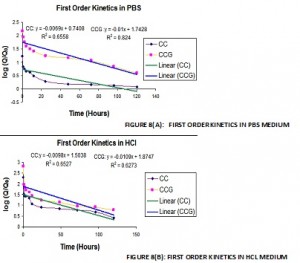 Higuchi Model: Figure 9(a) and (b) shows the profile of half order kinetics in PBS and HCl medium. Values of R2 indicated that the Higuchi model was best fitted with the release kinetic data of Curcumin for both HCl and PBS medium 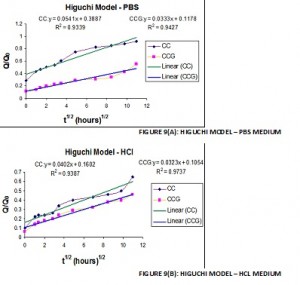 CONCLUSION: Curcumin encapsulated in polymer nanocapsules with Chitosan and Gold nanoparticles were synthesized by solvent evaporation method. The synthesized nanocapsules were analyzed by UV spectroscopy, FT – IR spectroscopy, Scanning electron microscopy (SEM) and Transmission electron microscopy (TEM). From the TEM measurements, the average diameters of the gold nanoparticles were found to be in the range of 18-20 nm.

Drug delivery studies were conducted and their release profiles in 0.1 M HCl and PBS (pH 7.0) media showed that both CC and CCG nanocapsules released curcumin in a slow and sustained manner. Furthermore the percentage of drug release was found to be slow in 0.1 M HCl solution for both CC and CCG nanocapsules. The rate constant and regression coefficient calculated from various kinetic models inferred that the Higuchi model was best fitted for the drug release of the nanocapsules.

ACKNOWLEDGEMENT: The authors wish to thank the SSN Trust, Chennai for their financial support of this project.