INTRODUCTION: Lactic acid bacteria (LAB) are the largest group of probiotic bacteria. Among the various LAB, Lactobacillus plays a vital role in both medical and also in food industry 1. A Lactobacillus species reported to have active benefits on nutrient, improved lactose utilization, anti-carcinogenic, anti-cholesterol and protection against disease 2, 3, 4. The anti oxidative activity was reported in lactic acid bacteria 5. Most of the Lactic acid bacteria may show antagonistic activity against pathogenic bacteria 6, 7. Consumption of large amount of milk fermented with a wild Lactobacillus strains and Bifidobacteria showed reduction in serum cholesterol level in human 8, 9. Some Lactobacilli have reported in vivo studies in albino rats that can lower the cholesterol and low density lipoprotein deposition10, 11.

Isolation and Identification of bacteria from cow milk: The cow milk was collected from the North Chennai, Tamilnadu, India and stored at 5 ºC. The sample was pour plated on Nutrient agar medium in order to isolate organisms. It was incubated anaerobically for 24 hours at 37 ºC. Based on the morphological, physiological and biochemical characterization each isolates were identified 23. Lactobacillus were identified at species level, on the basis of sugar fermentation test24. The following five sugars were used for fermentation test such as D- glucose, galactose, lactose, mannitol and D-fructose. The results of sugar fermentation test were evaluated with the Bergey’s manual to identify the Lactobacilli species. Production of gas from glucose was observed by inoculating culture into inverted Durham tubes and incubating at 37 ºC for 24-48 hours.

Growth of the isolates in the presence of cholesterol: Nutrient agar media with 1mg/1ml of cholesterol concentration was prepared, five isolates were inoculated and incubated anaerobically for 24 hours at 37 ºC. Nutrient media without cholesterol as control was used in this study.

Screening of the isolates for Cholesterol lowering property:

Cholesterol lowering activity at different concentration of cholesterol: 0.2, 0.4, 0.6, 0.8, 1.0 (mg/ml) different concentration of cholesterol in 10 ml broth was used. Three isolates of Lactobacilli, two isolates such as  Micrococcus luteus and Staphylococcus aureus were inoculated and incubated at 37 ºC for 24 hours. Colorimetry reading, Optical density at 650nm were recorded and compared with positive control.

Cholesterol lowering activity at different pH level: 10 ml of Nutrient broth at different pH such as 2,4,5,7 and 8 were used. Each isolates were inoculated and incubated at 37 ºC for 24 hours. Colorimetry reading, Optical density at 650nm were recorded. 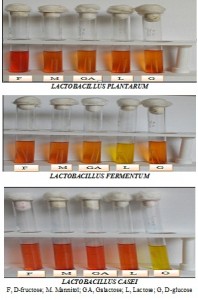 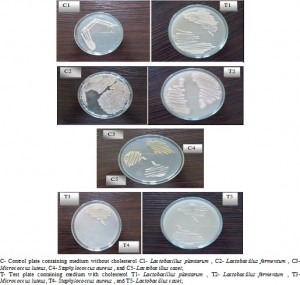 FIGURE 2: GROWTH OF ISOLATESON THE NUTRIENT MEDIUM CONTAINING WITH AND WITHOUT THE PRESENCE (CONTROL) OF CHOLESTEROL 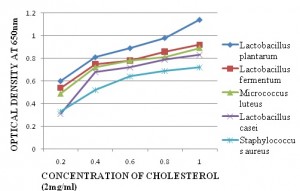 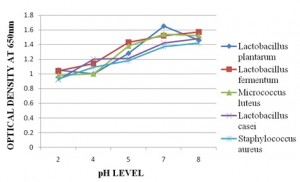 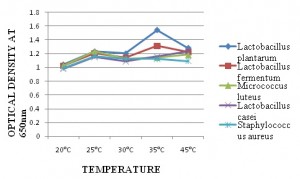 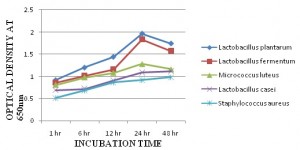 ACKNOWLEDGEMENT: This research was supported by Vels University Research grant.