ABSTRACT:  To develop and validate simple and precise methods RP – HPLC (Method A) and Dual wavelength method (Method B) for simultaneous estimation of Simvastatin (SIM) and Sitagliptin (SITA) in combined dosage form. Methods used are Method A, the chromatographic separation was achieved by using mobile phase acetonitrile: methanol: water (50:30:20), a C18 column. The mobile phase was pumped at a flow rate 1 ml /min and the eluents were monitored at 250 nm. Method B, two wavelengths were selected for each drug in such a way that the difference in absorbance is zero for the second drug. At wavelengths 225  and 248 nm SITA has equal absorbance values, therefore, these two wavelengths have been used to determine SIM, on similar basis 254 and 274 nm were selected to determine SITA  in  the combined formulation.

INTRODUCTION: Sitagliptin: SITA is the first of a new class of drugs for the treatment of type two diabetes , chemically it is known as (R) -4-oxo – 4 - [3-(triflouromethyl) -5, 6- dihydro [1,2,4]triazolo [4,3-a]pyrizine – 7 (8H)-yl]-1-(2,4,5-trifloro phenyl) butan-2-amine. It reduces blood glucose concentrations by enhancing the effect of incretins. Incretins are harmones (chemicals) which are produced by the (bowel) in response to food. These drugs are therefore also known as incretin enhancers. SITA can be estimated by different analytical and bio-analytical techniques, they are first order derivative 1, simultaneous estimation 2, UPLC 3, Spectrophotometry 4, 5, bio-analytical 6, mass spectrometry 7, spectrofluorimetry 8.

All statins act by inhibiting 3-hydroxy-3-methylglutaryl coenzyme A HMG-CoA reductase, the rate limiting enzyme of the HMG-CoA reductase path way, the metabolic path way responsible  for the endogenous production of cholesterol mainly used for the treatment of  dislipidimia and the prevention of  cardiovascular diseases . SIM can be estimated by different analytical techniques, they are RP-HPLC 9-12, derivative Spectrophotometry13, spectrophotometry 14-15, second order derivative16, LC-MS/MS 17.

SIM and SITA can be estimated simultaneously by RP-HPLC 18-20 but this method was fond to be more precise than previous methods.

Method A: Estimation by RP-HPLC:

The mobile phase was a mixture of Acetonitrile, Methanol and Water (50:30:20), the flow rate was fixed at 1 mL/min and the detection wavelength was monitored at 250 nm.

Twenty tablets were taken and weighed and weight equivalent to 10 mg of SIM was taken and dissolved in 10 ml of HPLC grade methanol. The solution was further diluted with mobile phase to obtain the desired concentration.

Twenty tablets were taken and weighed and weight equivalent to 10 mg of SIM was taken and dissolved in 10 ml of methanol. The solution was further diluted with water to obtain the desired concentration.

The absorption spectra of 15 µg/mL of SIM and 150 µg/Ml of SITA in water were recorded over the range 200–400 nm using water as blank. The overlain spectra were observed for selection of the suitable wavelengths of the developed method.

Method A, to develop a suitable method for the estimation of SIM and SITA, different mobile phases were employed to achieve the best separation and resolution. The method development was initiated with using a mobile phase Phosphate buffer pH 3.6: Methanol (50:50) and then changed to Phosphate buffer pH 3.6: Methanol: Acetonitrile (40:40:20) and finally the mobile phase consisting of acetonitrile: methanol: water (50:30:20) mixture was found to be appropriate allowing good separation of compound at a flow rate of 1mL/min using C18 column at a detection wavelength   of 250 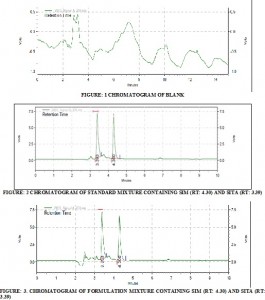 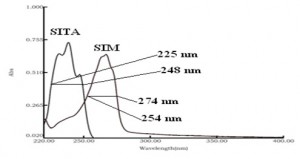 TABLE 1: LINEARITY PARAMETERS AND METHOD VALIDATION RESULTS OF METHOD A FOR STUDIED COMPOUNDS.

TABLE 2: LINEARITY PARAMETERS AND METHOD VALIDATION RESULTS OF METHOD B FOR STUDIED COMPOUNDS

The accuracy was evaluated by the recovery of SIM and SITA. The summary of the results and average mean of recovery data for each level of both active pharmaceutical ingredients (API) was within acceptance range. The average results of repeatability and inter-day precision was within the limit and % R.S.D was less than 2.

TABLE 3: ESTIMATION OF SIM AND SITA IN JUVISYNC TABLETS.

DISCUSSION: Validation of analytical method is the process by which it is established by laboratory studies, and the performance characteristics of the methods meet the requirements for the intended analytical application. Validation is required for any new or amended method to ensure that it is capable of giving reproducible and reliable results. Precision is a measure of the reproducibility of the whole analytical method (including sampling, sample preparation and analysis) under normal operating circumstances. Accuracy indicates the deviation between the mean value found and the true value. It is determined by applying the method to samples to which known amounts of analyte have been added these should be analyzed against standard and blank solutions to ensure that no interference exists.

Linearity is the ability of the method to obtain results which or either directly, or after mathematical transformation proportional to the concentration of the analyte within the given range. This is determined by calculating the regression value using a mathematical treatment of the results. Limit of detection is important for impurity test and the assays of dosages containing low drug levels and placebos. Limit of quantitation is the lowest concentration of analyte in a sample that can be determined with acceptable precision and accuracy.

The proposed methods have been evaluated over the accuracy, precision and linearity and proved to be more convenient and effective for the quality control and identity of SIM and SITA in pharmaceutical dosage forms.

CONCLUSION: The proposed two methods were found to be efficient, accurate, precise and economic and are suitable for routine quality control analysis.