ABSTRACT:Phyla nodiflora Linn., Synonym- Lippia nodiflora Rich also known as Jala-pippali is an important herb which can be used medicinally. The aim of the present study is to fractionate several chemical constituents in Phyla nodiflora. Chromatography was used for designing of multi component solvent system for different extracts where, for methanolic extract Hexane: Toluene: Ethyl acetate (2: 1.5: 0.5); for chloroform and petroleum ether Hexane: Ethyl acetate (3:1) were selected. Five different phenolic components were extracted and comparison was done through HPTLC and it was found that in phenolic BuOH extract maximum active constituents were separated

INTRODUCTION:Jala pippali is an aquatic plant of Verbenaceae family1, 2 having fruits like those of pippali3. The plant is botanically Phyla nodiflora Linn., syn- Lippia nodiflora Rich. Lippia is name in honour of Augustus Lippi, a French traveler of seventeenth century. It is a creeping prostate perennial herb, rooting at nodes1, 4, 5, 6 and mostly found in tropical and sub tropical regions. Throughout India in wet places along bunds of irrigation channels, canal edges and riverbanks and also ascending up to 900 m7, 8, 9. It is astringent, cooling, appetizing, stomachic, constipating, anthelmintic, digestive, aphrodisiac, opthelmic, diuretic and febrifuge. It is useful in vitiated conditions of pitta, burning sensation, anorexia, flatulence, colic, dyspepsia, diarrhoea, ulcers, strangury, asthma, bronchitis, knee joint pain, gonorrhea, irritation of internal haemorrhoids, cardiopathy, erysipelas and fever. Tender stalks and leaves are slightly bitter and prescribed in form of infusion of children suffering from indigestion and to women after delivery4, 8, 10.

This plant contains glycosides- nodiflorin A (C28H34O12, m pt - 186ºC), nodiflorin B,  lippiflorin A (3', 4’, 5,6 - tetrahydroxy -7-0-L - arabinosyl flavone ) and lippiflorin B (4' -O-L - rhamnoside of Lippiflorin A). A new flavone also detected is nodifloretin - chracterised as 4', 5, 6, 7 - tetrahydroxy -3-methoxyflavone. The leaves also contain tannin (8%), fat (9%), rutin, a waxy ester and b-sitosterol7, 11, 12, 13. The aim of the work is to fractionate these chemical constituents. Therefore, the present work is designed as follows: 1. Chromatography: Multi component mobile phase designing for different extracts. 2. Extraction of three different phenolic components and comparison of methods through HPTLC.

Identification of the Plant:

Jala-pippali was identified by referring its taxonomical and morphological characters mentioned in different Materia medica and Floras like Flora of Presidency of Bombay, Flora Simlensis etc. The whole plant required for the present study was collected personally from Botanical Garden, Sassoyi, G.A.U., Jamnagar. The material was washed and then dried under sun and shade.

Chemicals: All the chemicals used in experiment are mainly CDH, Qualligen and Ranbaxy.

a) Mobile phase designing for methanolic extract for T.LC. by Triangle Series:

Multi component solvent system was designed using triangle series15. L.R. Synder founded these series. He classified the solvents according to their solvent strength in nine groups. From these groups, any solvent was taken and mixed with Hexane in different ratios and the TLC was run. Here Hexane was taken as a diluent as its strength in zero.

Where,   i=1,   y = Volume fraction, s = Strength of solvent and it can be defined as the sum of the strength of individual solvent multiplied by its volume fraction3, 4.

For 1st TLC plate, solvent system used was Hexane : Toluene (3:1) and in 2nd TLC plate, same solvent in the ratio  2:2, followed by changing the ratio to 1:3 in 3rd TLC plate. Rf values were noted down.

Now another solvent system, Hexane: Ethyl acetate was used in same pattern as described above. Rf values were again noted down. From these Rf values DhRf values were obtained. All the Rf values are multiplied by 100 and were termed as DhRf values. They are regarded only as guide values for the migration distances even when all experimental data are accurately measured.

Here Mobile phase was designed using screening series. In 1st series, TLC was run using neat solvents like methanol, acetic acid, ethyl acetate, toluene and chloroform. This system gives an idea that which solvent picks the spot and separates the components. The solvents were selected and we shifted to 2nd series. Selected solvents are combined with Hexane in different proportions and their TLC was run. Their Rf values and DhRf values were also noted down.

Finally the solvent system used was Hexane: Ethyl acetate in the ratio 3:1 and strength 1:1.

Mobile phase was designed as per the procedure for petroleum ether extract and the solvent system finally selected was Hexane: Ethyl acetate in the ratio 3:1 and having strength 1.1.

Extraction of Phenolic Components and Comparison through HPTLC:

To the sample, add 2M HCl and hydrolyze it on water-bath for 30 minutes. In a test-tube take acetic acid, water and hydrochloric acid in the ratio (30:10:3). This solution in the test-tube was added in the hydrolyzed sample. Boiled for 10 minutes and then cooled. If not red, stop the work. If red color appeared, then centrifuge or filter it. From the centrifuge collect the upper layer and if filtered, collect the filtrate. Then go for ethyl acetate partition. Ethyl acetate layer was separated, dried, then methanol was added and this phenolic methanol extract was filled in the vial. To the rest portion other than ethyl acetate, amyl alcohol or butanol was added. This butanol layer was divided into 2 parts. One part of this butanol layer was used directly as phenolic butanol and to another part, methonolic HCL was added. This was used as phenolic methanolic HCl16.

These three samples obtained were subjected for HPTLC separation with other two samples that were fresh methanolic extract and methanolic extract prepared three months before. For HPTLC separation pre-coated silica gel TLC plate (10 x 10 cm) of uniform thickness of 0.2 mm was used. These five spots were spotted on the plate in the sequence given below:

The solvent system used was Hexane: Toluene: Ethyl acetate in the ratio 2:1.5:0.5. The plate was developed in twin trough chamber and was scanned under different wavelengths starting from 200 nm to 450 nm. The Rf values and color of resolved bands were noted down and were presented in the charts.

The solvent system finally selected for methanolic extract was Hexane: Toluene: Ethyl acetate in the ratio (2: 1.5: 0.5) because the number of spots were more which indicate that number of components separated were more. The distance between two spots as indicated by D hRf values were also appropriate. å D hRf and P D hRf values were also higher in comparison to other tested solvent mixtures. The solvent system found to be best for separation of Petroleum ether extract was Hexane: Ethyl acetate (3:1) but number of spots were more in Hexane: Chloroform. But Hexane : Chloroform was not selected because its DhRf values were very close to each other indicating that components were not separated properly. Hexane: Ethyl acetate showed good separation and its  å D hRf and P hRf values were also higher when compared to other tested solvent mixtures.

The solvent system found to be best for separation of Petroleum ether extract was Hexane: Ethyl acetate (3:1) but number of spots were more in Hexane: Chloroform. But Hexane : Chloroform was not selected because its DhRf values were very close to each other indicating that components were not separated properly. Hexane: Ethyl acetate showed good separation and its  å D hRf and P hRf values were also higher when compared to other tested solvent mixtures.

For HPTLC separation, five spots were spotted on different tracks on the pre-coated silica gel T.L.C. plate (Fig 1) in the sequence given below:

The results obtained are given in the Table 3:

From the above table, values of Track 1 and Track 2 were compared, as both are methanolic extracts, one fresh prepared and another extract prepared three months before. Number of spots was more in track 1 as compared to track 2. More spots were observed when visualized in the wavelength 200 to 300 nm. But only three Rf values (0.38, 0.49, 0.99) were common in both the tracks. 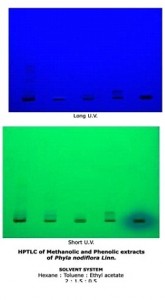 Table 3: Extraction of phenolic components and comparison of methods through HPTLC

This proved that the fresh methanolic extract was better than the extract prepared three months before.

The above results showed that track 3 i.e. Phenolic BuOH extract is better than other extracts. All the five tracks were compared and the common components in each track are given below:

Multi component mobile phase designing of different extracts were carried out so that more number of components are separated out.

Extraction of three different phenolic components was done and the methods were compared through HPTLC. The best method was of extraction with butanol as maximum number of common components was separated out by this method.

The author expresses her sincere regards and gratitude to Institute for Post Graduate Teaching and Research in Ayurveda, Gujarat Ayurved University for their ablest guidance, erudite suggestions and wholehearted co-operation during the work. Sincere thanks to Ms Shruti Rawal for critically reading this paper.