ABSTRACT: Background: The relation between Chronic Kidney Disease (CKD) and cognitive impairment is an important public health issue because the prevalence of CKD is increased worldwide. In recent years, chronic kidney disease has been proposed as an independent risk factor for cognitive decline but the available data are conflicting. In the present study, we examined the relations of CKD and lower renal filtration function with a broad range of cognitive functions in a dementia-free community-based population. Methods: A cross-sectional, observational, questionnaire based study was conducted at Nephrology department of Govt. Medical College, Calicut. Montreal Cognitive Assessment Questionnaire was used to assess cognitive status. Patient’s divided into 5 groups depending on stage of chronic kidney disease. Estimated glomerular filtration rate was calculated using modification of diet in renal disease equation. Results: 210 patients were enrolled in the study. 53.8% have mild cognitive impairment and 46.2% have normal cognitive status. Education with cognitive status was found to be statistically significant (P=0.000). Conclusion: Decreased kidney function associated with greater cognitive decline, even in those with mild CKD. Further studies are needed to determine the reasons for cognitive impairment in subjects with CKD.

INTRODUCTION: Chronic kidney disease (CKD) is a growing public health problem with evidence pointing to an increasing incidence and prevalence worldwide 1. The prevalence of chronic kidney disease (CKD) increases with aging 2.  Cognition is the mental process of acquiring knowledge by the use of reasoning or perception and underlies all daily activities, from the most basic to the most complex. Cognitive dysfunction includes reduced mental alertness, intellectual impairment, decreased attention and concentration, memory deficits and diminished perceptual–motor coordination.

The Montreal Cognitive Assessment (MoCA) is a screening test for cognitive impairment that covers major cognitive domains including episodic memory, language, attention, orientation, visuospatial ability and executive functions, while remaining brief and easy to administer. It is generally considered superior to the well-established Mini-Mental State Examination (MMSE) screening test, since the MoCA not only assesses executive functioning, which may be particularly important in the CKD population, but also presents a higher sensitivity for mild cognitive impairment 4.

Previous studies results concluded that CKD is associated with cognitive impairment. Several studies use different tools for assessing cognitive status. Because of the lack of data and conflicting results here evaluated the cognitive status among CKD patients (stages 3-5) with a specific and sensitive tool MoCA.

Study site: The Study was conducted in the Nephrology Department of Govt. Medical College, Calicut which is a Tertiary Care Teaching Hospital with Multi Specialty Departments.

Study design: The studies were observational and cross- sectional study.

Study period: This study was conducted over a period of six months.

Study approval: This study was approved by the ethical committee constituted by Govt. Medical College, Calicut.

Materials and Source of data:

Patient consent form: An informed consent form was prepared in both English and Malayalam version for the convenience of patient.

Montreal cognitive assessment questionnaire: Cognitive status was checked by interviewing the patient with Montreal cognitive assessment questionnaire. It assesses different cognitive domains: attention and concentration, executive functions, memory, language, visuoconstructional skills, conceptual thinking, calculations and orientation. Time to administer the MoCA is approximately 10 minutes. The total possible score is 30 points. Add one point for an individual who has 12 years or fewer of formal education, for a possible maximum of 30 points. Score of 26 or above is considered as normal 5.

Study procedure: Cross-sectional observational study was conducted at Nephrology department of Govt. Medical College, Calicut. This study was conducted over a period of 6 months from February 2016 to July 2016. Patients visiting Outpatients of nephrology department and who satisfy the inclusion criteria were enrolled in to the study. Ethical approval obtained from Institutional Ethics Committee of Govt. Medical College, Calicut, Kerala, India. Patient data collection form was prepared and the information was collected from the patient by interviewing the patient and also from the case records. Montreal Cognitive Assessment Questionnaire was used to assess the cognitive status. Informed consents were obtained from all participants enrolled in the study and questionnaire is used with permission.

MDRD (modification of diet in renal disease) glomerular filtration rate equation: MDRD equation is more accurate as an estimator of kidney function. The working group of the National Kidney Foundation’s (NKF) Kidney Dialysis Outcomes and Quality Initiative (K/DOQI) has developed a CKD classification system based on the presence of structural kidney damage and/or functional changes in glomerular filtration rate (GFR) present for a period of 3 months or more. CKD is categorized by the level of kidney function (as defined by GFR) into stages 1 through 5, with each increasing number indicating a more advanced stage of the disease.

RESULTS AND DISCUSSION: The data collected through interviews and case report reviews, were documented, tabulated and statistically analyzed and described with help of tables and graphs. Total 210 patients were enrolled in this study.

TABLE 1: BASELINE CHARACTERISTICS OF THE POPULATION

Out of 210 patients, 140 (66.7%) were males and 70 (33.3%) were females (Table 1). This result was concordant with the nationwide survey of ESRD by the Japanese Society for Dialysis Therapy, revealed a higher incidence and prevalence in men than in women 7. Manju et al study results also similar to the results, i.e. men are more prone to develop chronic kidney disease (CKD) and progress to end-stage renal disease than are women 8. The majority of CKD patients were in the age group 51-60 years. The minimum and maximum age included in the study was 31 and 76 years respectively (Table 1). This finding is consistent with Odagiri G et al study. The prevalence of CKD was high in elderly population and patients showed a higher prevalence of cognitive impairment in older groups (50 years and older) 9. 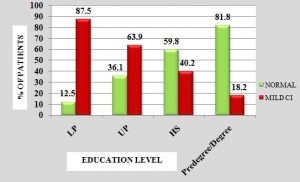 Chi-square value of stage of CKD patient with cognitive status was not statistically significant. Cognitive impairment is not depended on stage of CKD. It is seen in all stages of CKD. CI is high in all stages (Table 6). A study by Kurella M et al results is not concordant with study result: advanced stages of CKD were associated with an increased risk for cognitive impairment 14.

CONCLUSION: The study concluded that CKD is one of the important diseases seen among the common people. Hypertension and Diabetes are the main causes of this disease. Females are more affected than males. Cognitive impairment is not depended on stage of CKD. It is seen in all stages of CKD.

ACKNOWLEDGMENTS: The authors are thankful to Dr. Ziad Nasreddine to give the copyright to use MoCA questionnaire and special thanks to Dr. Biju George for every suggestion and assistance.