ABSTRACT: Chronotherapeutic systems are meant for the treatment of most of the diseases that occurred and found till date, which are proved to be in association with the biological/circadian rhythms of our body with respect to disease symptoms and their severity. Such diseases use this treatment as it involves in-vivo drug availability with distinctive release patterns so as to match the rhythms of disease and achieve optimized therapeutic outcomes with minimized side effects. The specific time at which patients take their medications is taken into consideration as it is the main reason for the treatment success. There is a synchronization of pharmacodynamics and pharmacologic activity of drugs with that of the biological clock, so variations in disease state and plasma drug concentration are taken into consideration during the development of this drug delivery system. Various novel technologies are employed in developing Chronotherapeutic devices and dosage forms, some are available in the market already, and many others are yet to arrive. The main objective of this review is to explore the current status of Chronotherapeutic technologies and also to provide a view on various variations in dosage forms that contribute for chronotherapy.

INTRODUCTION: The goal of drug research has always been involving the development of a formulation that is related only to a particular pathological condition. Of all the routes of drug delivery oral route is considered as the most favoured and user-friendly means as it has the highest degree of patient compliance and also provides reproducible and effective in-vivo plasma concentration 1. Oral drug delivery systems only focuses on drug output with minimization of drug concentration peaks in the body. Oral drug delivery can be classified into three categories:

Another category i.e., modified release dosage forms, are developed that have control over the release of drug in a predetermined fashion. These dosage forms provide numerous advantages such as reduced dosage and frequency, least side effects, and better-improved patient compliance, but these also still show stable plasma concentrations 2. Certain disease conditions require drug release after a lag time i.e.; they need periodical variations in plasma concentrations. It is also reported that some medications may work better if their administration is made to coordinate with day-night patterns and biological rhythms. These all drawbacks of various dosage forms and varied requirements of disease condition led to the development of “Chronotherapeutic Drug Delivery Systems,” which include learning about chrono-therapeutics, chronopharamceutics and chrono-biology 3, 4. Chronotherapeutics is defined as a treatment that employs a distinctive in-vivo drug release pattern of drug that’s timed to match rhythms of disease symptoms so as get optimized therapeutic outcomes and minimized side effects5, 6. Its main goal involves the management or reversal of acute or chronic disease conditions existing and delivery of drugs to the right site in the body, at the right time, in an optimal dose.

Chronotherapeutic drug delivery systems show specific transient release of drug in a bust at circadian timings that are correlated with the pathological disorder after a predetermined off-release period. The specific time at which patients take their medications is taken into consideration as it is the main reason for treatment success. There is the synchronization of pharmacodynamics and pharmacologic activity of drugs with the biological clock.

Thus these systems provide time-specific and site-specific drug delivery system in order to achieve the maximum effect of drug with increased patient compliance and hence are gaining a lot of interest 7-11. Chronopharmaceutics is framed mainly using two words: “Chronobiology” and “Pharmaceutics”. Chronobiology is defined as the study of biological rhythms and their respective mechanisms 12, 13.

Biological Rhythms: They are of three types

Circadian Time Structure: The circadian time structure in humans is used to interpret the peak time of 24 h. Fig. 1 shows the peak time for a selected number of human circadian rhythms that are related to the synchronized routine of most human being’s parameters through the figure; the information clearly illustrates that physiology and biochemistry of every human being are not constant, vary with time 14. 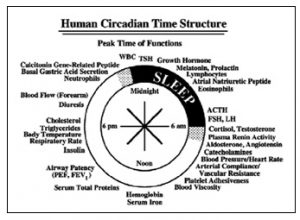 Mechanism of Biological Timekeeping: The circadian rhythm of our body is under the control of suprachiasmatic nuclei situated in the hypothalamus and pineal gland.

The rhythmic activity of clock genes (per 1, per 2, and per 3) and the nocturnal secretion of melatonin from pineal gland are mainly responsible for the central timekeeping mechanism.

This so-called master clock controls the duration and phase of the multitude of circadian clocks which are present in the cells, tissues, and organ system 15, 16.

Biological timekeeping is mainly an adaptation that is being evolved with time due to the cyclic phenomenonal changes that are being displayed in the environment.

Hence they ensure the peak functioning of the all humans during the day, and restoration and repair during the night. It is also in helpful from all these years by making adjustments with different seasons of the year. These variations in a day are shown in Fig. 2 17-20. 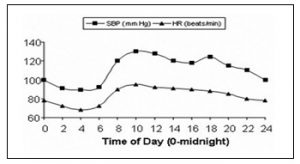 Biological rhythms at the cellular and subcellular levels can give rise to significant dosing-time differences in the pharmacodynamics of medications unrelated to their pharmacokinetics 21. This phenomenon is termed ‘chronesthesy’.

Need for of Pulsatile/ Chronotherapeutic Drug Delivery Systems: The shift of usage from conventional sustained release technique to the modern pulsatile delivery system is due to the following reasons4:

For example, it is rational for a delivery system to pump out the drug much faster when the system reaches the distal segment of the intestine to avoid the entombment of the drug in the faeces.

Pulsicap System:  It consists of a water-insoluble capsular body that has a filling of drug and a cross-linked hydrogel plug that swells upon contact with the dissolution medium or gastrointestinal fluids thereby pushing drug out of the capsules, which is clearly shown in Fig. 3. 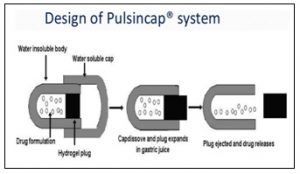 Port Systems: It consists of a gelatine capsule in a cellulose acetate semi-permeable membrane with an inside insoluble plug and osmotically active ingredient along with the drug. When this system absorbs the gastric fluids, it leads to increased inner pressure that ejects the plug after a lag time. Fig. 4 gives a picture of port systems. 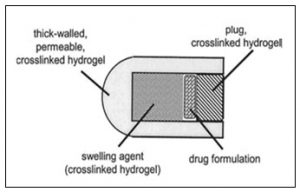 Delivery by Solubility Modulation: They contain a solubility modulator (solid organic acid, inorganic salt, or organic salt) for pulsatile delivery of a variety of drugs. The compositions contain a drug, a modulating agent, sodium chloride.

The amount of NaCl used is such that it is less than the amount that is needed to maintain saturation in a fluid that enters the osmotic device. The pulsed delivery is based on drug solubility.

Delivery by Reservoir System with Erodible/Soluble Barrier Coatings: Barrier layer is coated upon the reservoir device wherein the barrier erodes/dissolves after a specific lag time enabling the drug release rapidly from the reservoir as shown in Fig. 5. 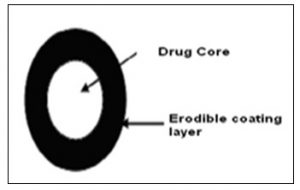 Time Controlled Explosion System: These systems employ the incorporation of Super-disintegrants as swelling agents that facilitate timed burst release upon ingress of water.

The drug is coated upon non-peril seeds initially, followed by a swellable layer and an insoluble top layer coating. This is shown in Fig. 6. 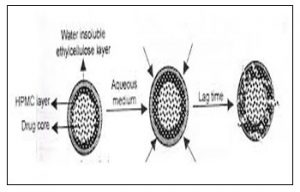 Sigmoidal Release Systems: It is made up of pellets that comprise different acids such as succinic acid, acetic acid, glutamic acid, malic acid, citric acid that are coated with ammonia methacrylate copolymer.

Low Density Floating Systems: For the drugs which have an absorption window in the stomach, low density floating micro particle pulsatile dosage forms are helpful by retaining the drug in the stomach for a longer period without influencing by the pH fluctuations and gastric emptying, as shown in Fig. 7.

Among the various polymers, N-isopropyl acrylamide is most extensively used. This is shown in Fig. 8. 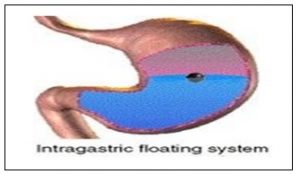 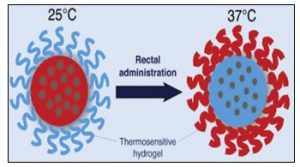 Chemical Stimuli Induced Pulsatile Release: These systems release the drug in the presence of enzymes or any other chemical stimuli.

PH Sensitive Drug Delivery Systems: pH-dependent polymers enable the drug release only in a desired pH range such as eudragit, pthallates, carboxymethylcellulose, methacryllic acid especially polymers like eudragit L and S favour colon targeting of which one example is explained by Fig. 9. 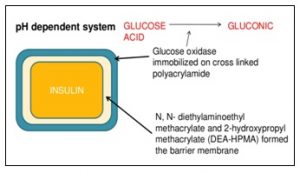 Electro responsive pulsatile release: Drug release is facilitated by the action of applied electric field on the rate-controlling membrane that contains polyelectrolytes, as shown in Fig. 10. 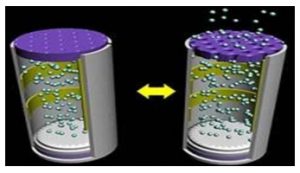 Magnetically Induced Pulsatile System: In these systems, there is the incorporation of magnetic materials such as magnetite, iron and nickel, cobalt into the capsule or tablets by the external influence of the magnetic field. Using this, we can position the drug at a specific place or slow down its access to unwanted sites, thereby changing the time/extent of drug absorption into the stomach or intestine, as shown in Fig. 11. 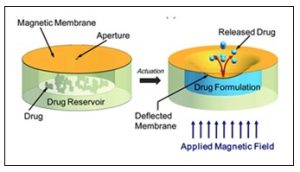 Ultrasonically Stimulated Systems:  Ultrasound interaction with that of biological tissues improves the drug permeation through biological barriers such as skin. The Mechanism involved here is the absorption of ultrasonic energy by the fluids or tissues.  This is shown in Fig. 12. 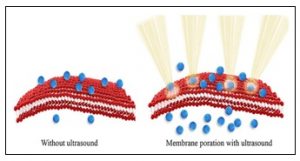 CONCLUSION: Sustained and controlled delivery systems that are available traditionally for several years gained a lot of success and application in the field of medication. These are helpful as they keep the in vivo drug concentration at the therapeutic level for a prolonged period of time. Though it is essential, they are not sufficient to treat diseases associated with circadian rhythms with respect to symptoms and severity. Therefore, there develops a need to comprehend the effect of the biological environment on release patterns so that a successful design with expected in-vivo performance can be developed 41-43. Recently the research that is done in Chrono-pharmaceutics demonstrated the importance of biological rhythms in drug therapy and led to the development of a new approach for drug delivery systems. It is proved that optimum clinical outcome is not achieved if drug plasma concentrations are constant. As symptoms of a disease are showing circadian variation, drug release should also vary with time. Hence different technologies are applied to develop time-controlled, pulsed, triggered, and programmed drug delivery devices in recent years as the timing of drug administration in disease therapy has a significant impact upon treatment success. Therefore chronotherapeutics remains an important area for continuing research 44, 45.

ACKNOWLEDGEMENT: The authors are thankful to GITAM Institute of Pharmacy, GITAM Deemed to be University, for providing the necessary facilities for a review article.

CONFLICTS OF INTEREST: Declared none