Many therapeutic agents are most effective when made available at constant rates, near the absorption sites or at the correct time of administration. Pulsatile drug delivery system is the most interesting time-specific and site-specific system. This system is designed for chronopharmacotherapy which is based on circadian rhythm. Recently a greater effort has been taken in designing delivery systems which synchronize drug delivery with circadian rhythms in order to optimize efficacy and /or minimize side effects. Pulsatile systems deliver the drug at right site of action at the right time and in the right amount. Chronotherapeutics is the discipline concerned with the delivery of drugs according to inherent activities of a disease over a certain period of time. Chronotherapy can particularly benefit patients suffering from allergic rhinitis, rheumatoid arthritis and related disorders, asthma, cancer, cardiovascular diseases, and peptic ulcer disease. This review gives an outline as to how pulsatile drug delivery systems based on circadian rhythms are developed.

INTRODUCTION: Oral route of drug delivery is considered the favoured and most user friendly means of drug administration having the highest degree of patient compliance, as a result of which much efforts are aimed to identify orally active candidates that would   provide reproducible and effective plasma concentrations in vivo 1. Oral drug delivery can be classified into three categories:

Traditionally,   drug   delivery   systems   have   focused   on constant/sustained   drug output   with   the   objective   of minimizing peaks and valleys of drug concentrations in the body, to optimize drug efficacy and to reduce adverse effects.

Pulsatile system is amongst one of them and gaining a lot of interest as it is increasing patient compliance by means of providing time-specific and site-specific drug delivery system, thus providing special and temporal delivery 3.

Pulsed or pulsatile drug release is defined as the rapid and transient release of a certain amount of drug molecules within a short time-period   immediately after   a predetermined   off-release   period 4.   Recent studies show that diseases have predictable cyclic rhythms and the timing of medication regimens can improve outcome in selected chronic conditions 5.

Modified release dosage forms show different release profiles depending on their type.  Sustained release dosage forms may maintain   nearly   constant   plasma   drug concentration   in   therapeutic   window   for prolonged time as shown in figure 1. But there are certain conditions which demand release of drug after a period of no drug release which is known as lag time 6. Diseases wherein constant drug levels are not preferred, but need a pulse of therapeutic concentration in a periodic manner, act as stimuli for the development of “Pulsatile Drug Delivery Systems”7. 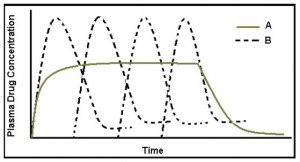 FIGURE 1: RELEASE PATTERN OF SUSTAINED (A) AND PULSATILE RELEASE (B).

A delivery system with a release profile that is characterized by a time period of no drug release (lag time) followed by a rapid and complete drug release (pulse release) can be called as an ideal pulsatile drug delivery system. In other words, it is required that a drug should not be released at all during the initial phase of dosage form administration.

Lag time is defined as the time between when a dosage form is placed into an aqueous environment and the time at which the active ingredient begins to get released from the dosage form; precisely lag time is an interval of no drug release followed by rapid drug release 1 (Figure 2). 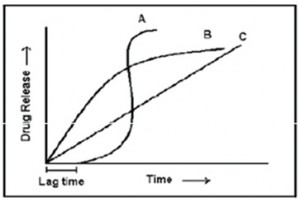 The study of biological rhythms and their mechanisms is known as chronobiology. They are regulated by sunlight.

These rhythms allow organisms to anticipate and prepare for precise and regular   environmental changes. They are important in determining the sleeping and feeding patterns of animals, including human beings. There are clear patterns of core body   temperature, brainwave   activity, hormone production, and other biological activities linked to this cycle (Figure 3). 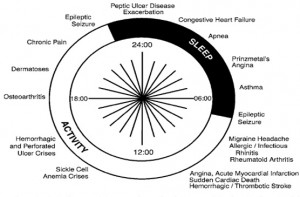 Chronopharmaceutics has emerged, wherein, research is devoted to the design and evaluation   of   drug   delivery   systems   that   release   a therapeutic agent at a rhythm that ideally matches the  biological   requirement   of   a   given   disease   therapy.

Chronotherapeutics does not involve only new medicines but also the improved applications of established once in a different and more biologically efficient manner. In certain instances, chrono-therapeutics may be achieved by unequal morning and evening dosing schedules of sustained release 12 hours medication systems, better timing of conventional once a day medication/delivery systems, or application of special tablet and capsule formulations dosed at designated times to proportion medications over 24 hours in synchrony with  rhythm  determined  requirements.

Goal of chronotherapeutics:  It is the management or reversal of existing acute or chronic medical conditions and delivery of drugs to the body to the right site, at the right time, and at the optimal dose.

Need for of Pulsatile Drug Delivery Systems: There are many conditions and diseases where sustained release formulations do not show good efficacy. The shift from conventional sustained release approach to  modern pulsatile delivery of drugs can be credited to the following reasons:

Special Chronopharmacological needs: Circadian rhythms in certain physiological functions are well established. It has been recognized that many symptoms and onset of disease  occur during specific time periods of 24 hour day,  e.g.,  asthma  and  angina  pectoris  attacks  are  most frequent in the morning hours.

Biological Tolerance: Continuous   release   drug   plasma   profiles   are   often accompanied by a decline in the pharmacotherapeutic effect of the drug e.g., biological tolerance of transdermal nitro-glycerine.

Local Therapeutic need: For the treatment of local disorders such as inflammatory bowel disease, the delivery of compounds to the site of inflammation with no loss due to absorption in the small intestine is highly desirable to achieve the therapeutic effect and to minimize side effects.

Drug absorption differences in various Gastrointestinal Segment: In general, drug absorption is moderately slow in the stomach, rapid in the small intestine, and sharply declining in the large intestine. Compensation for changing absorption characteristics in the gastrointestinal tract may be important for some drugs. For example, it is rational for a delivery system to pump out the drug much faster when the system reaches the distal segment of the intestine, to avoid the entombment of the drug in the faeces. 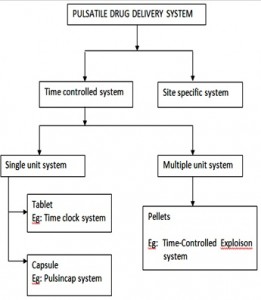 Methodologies for the PDDS can be broadly classified into four classes;

There was a potential problem  of  variable  gastric  residence  time,  which  was overcome  by  enteric  coating  the  system  to  allow  its dissolution only in the higher pH region of small intestine 15-19 (Figure 4).

FIGURE 4: SCHEMATIC DIAGRAM OF RELEASE OF DRUG FROM CAPSULE

Such a system avoids a second daily dose that otherwise would have been administered by a nurse during school hours (Figure 5).

The number of stops and the longitudinal placements of the stops along the length of the capsule dictate the   number   and   frequency   of   the   pulses,   and   the configuration of the partition controls the pulse intensity. This system was used to deliver porcine Somatotropin. 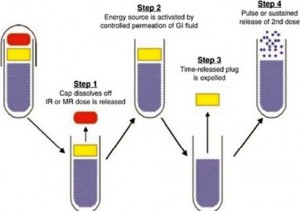 Stimuli induced Pulsatile Release System: The mechanisms of drug release include ejection of the drug from the gel as the fluid phase synerges out, drug diffusion along a concentration gradient, electro-phoresis of charged drugs towards an oppositely charged electrode and liberation of the entrapped drug as the gel or micellecomplex erodes.

Chemical Stimuli induced Pulsatile Systems: In these systems, there is release of the drug after stimulation by any biological factor like enzyme, pH or any other chemical stimuli. In these systems, the polymer undergoes swelling or deswelling phase in response to chemical reaction with membrane, alteration of pH and Inflammation induce,  release  of  drug  from  polymer  by swelling the polymer.

This type of release is classified into two classes, namely

Diflunisal (DIF)- loaded micelles were prepared by dialysis method. In vitro release test at various temperatures was also performed to study the effect of temperature on   the   drug   release profiles. 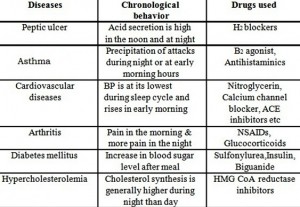 CONCLUSION: Chronotherapeutics is the discipline concerned with the delivery of drugs according to inherent activities of a disease over a certain period of time. Chronotherapy can particularly benefit patients suffering from allergic rhinitis, rheumatoid arthritis and related disorders, asthma, cancer, cardiovascular diseases, and peptic ulcer disease. There is a constant need for new delivery systems that can provide increased therapeutic benefits to the patients.

Circadian rhythm of the body is an important concept for understanding the optimum need of drug in the body. Pulsatile drug delivery is one such system that, by delivering drug at the right time, right place & in right amounts, holds good promises of benefit to the patients suffering  from  chronic  problems like arthritis,  asthma, hypertension, etc .Thus, designing of proper pulsatile drug delivery will enhance the patient compliance, optimum drug delivery to the target side & minimizing the undesired effects.