ABSTRACT: Flavonoids are natural products widely distributed in plant kingdom that gained lot of importance due to variety of biological effects relevance to numerous healthcare. It has been chosen as a drug molecule and gained attention in the area of novel drug delivery system because of their disease preventing property and therapeutic expediency in multiple biological effects. Chrysin (C) is one of the most utilized flavonoid having pharmacological effects such as anti-oxidant, anti-inflammatory, anti-cancer, antidiabetic and anti hypertensive actions. Even though it has potential therapeutic value and beneficial effects on human health, it possesses some disadvantages like poor solubility and low bio-availability, this limits its therapeutic usage of Chrysin.  The present work designed to improve the solubility and the bioavailability of chrysin by the developing a chrysin loaded chitosan nanoparticles (NC). It was prepared by ionic gelation of chitosan and tripolyphosphate. The chrysin loaded chitosan nanoparticles were prepared in 5 batches and named as NC1, NC2, NC3, NC4 and NC5. The formulated nanoparticles were characterized by particle size analyzer, Zeta potential, Scanning Electron Microscopy, transmission Electron microscopy and Fourier transform infrared spectroscopy (FT-IR). The in vitro drug encapsulation efficiency and drug release were performed in the formulated nanoparticle. Among the different batches studied, NC1 batch showed lowest mean particle size and highest entrapment efficiency. Scanning Electron Microscopy of polymeric encapsulated chrysin nanoparticles morphology revealed that spherical in shape. In vitro drug release study showed the chrysin loaded chitosan nanoparticles were capable of releasing drug in sustained manner. It is concluded that, the developed chrysin loaded chitosan nanoparticles might be used as vehicle for the improved solubility and prolonged delivery of chrysin.

INTRODUCTION: Flavonoids are the polyphenolic compounds present abundantly in plants, more attention where paid towards research on natural flavonoids. They are found to have antioxidant property, one such flavonoid is Chrysin. Chrysin 5, 7-dihydroxyflavone, (Table 1) is a flavone present at high levels in honey, propolis, blue passion flowers passiflora caeulea, Passiflora incarnata and in Oroxylum indicum. It is also found in Pleurotus ostreatus 1-5 (Mushroom).

TABLE 1: STRUCTURE AND CHEMISTRY OF CHRYSIN

Unfortunately, despite the wide spread therapeutic action of flavonoids, their poorly water soluble nature reduces their widespread use of flavonoids in the pharmaceutical field.  Low drug solubility results in reduction in the amounts of drug absorbed and hence large dose is usually required for oral dosage regimens 20.The clinical use of chrysin is very less because of its hydrophobic nature, poor bioavailability, poor permeability, poor solubility, and the metabolism of chrysin occurs in a short time period without entering into the circulation. In the present study, to overcome the disadvantages of chrysin, it is encapsulated in the chitosan nanoparticles.

A number of novel drug delivery systems have been investigated to overcome poor flavonoid dissolution. Polymers and surfactants were utilized in these formulations to facilitate solubilization of poorly soluble flavonoids. One such polymer is chitosan. Chitosan (CS) is a naturally occurring nontoxic, biocompatible, biodegradable, cationic polysaccharide obtained by partial deacetylation of chitin, the major component of crustacean shells.  This hydrophilic polymer can easily cross-link with counter poly anions like TPP to control the release of drugs. CS based nanoparticles have provided the opportunities for the site-specific delivery of drugs because they can increase bioavailability and prolong time in blood circulation. Preparation of CS nanoparticles by ionic gelation has attracted much attention because the process is very simple and mild. Various work have been done in flavonoids like quercetin 21, rutin 22 and curcumin 23 using polymer as chitosan, so this method was utilized in this study.

MATERIALS: Chrysin, chitosan (High molecular weight) and sodium tri polyphosphate has been purchased from Sigma Aldrich. Tween- 80 and glacial Acetic acid was purchased from Thermo Fischer Scientific India Pvt. Ltd. All other reagents and solvents used were of analytical grade.

Compatibility Study: It was carried out to determine the possible interaction between the drug and polymer used. To investigate the compatibility, FTIR spectra of chitosan, chrysin and the physical mixture were recorded using FTIR spectrophotometer (Schimadzu IR) to characterize the possible drug and polymer interaction in the solid state. Samples of about 2mg were nicely ground and mixed with IR grade dry potassium bromide and then compressed at 10 tonnes under hydraulic pressure to form a thin disc. The spectra was scanned over the frequency range of 400 to 4000 cm-1.

Preparation of Chrysin loaded Chitosan nanoparticles 24: The chitosan nanoparticles were synthesized by ionic gelation method. Chitosan was dissolved in 0.1% acetic acid and kept under magnetic stirring for 24 hours. Few drops of 0.5% Tween-80 were added to the solution to prevent aggregation. To this solution 0.1% of sodium tripolyphosphate (TPP) was added in drops to the solution as a cross linking agent and the solution stirred continuously for two hours. The PH of the preparation was adjusted with sodium hydroxide. The final solution was centrifuged at 12000 RPM for 15 min.

The pellet formed was resuspended in water and again centrifuged to remove the solvent. The pellet was kept in -80ºC for 12 hours and it was lyophilized. To prepare chrysin loaded chitosan nanoparticles (NC), Chrysin was dissolved in dimethyl sulphoxide (DMSO): water and added to chitosan in acetic acid. The drug was added before the addition of the Sodium Tri Poly phosphate (cross linking agent). The chrysin loaded chitosan nanoparticles were prepared in 5 batches, by changing the percentage of chitosan used as 0.1%, 0.2%, 0.3%, 0.4%, 0.5% and named the formulation as NC1, NC2, NC3, NC4 and NC5 respectively.

Characterization: Drug encapsulation efficiency: The amount of chrysin encapsulated in chrysin loaded chitosan nanoparticles was determined by separating the unentrapped drug from the nanoparticle by centrifugation at 12,000 rpm for 15 min. The supernatant obtained upon centrifugation was collected and measured for absorbance at 348 nm.

In vitro drug release: In-vitro drug release was studied using diffusion bag technique. Dialysis membrane, previously soaked in distilled water was tied to one end and 2 ml of formulation was accurately placed into it. Bag was tied at other end. Then dialysis bag containing nanosuspension was kept in100 ml freshly prepared phosphate buffer solution of PH 7.4 under stirring. 2 ml of solution was withdrawn at 15 min interval and each time fresh buffer was replaced. And absorbance was measured on UV spectrophotometer at 348 nm. Calculated by formula. All measurements were performed in triplicate (n=3) and SD was calculated.

RESULTS AND DISCUSSION: FTIR study was done to find out the possible interaction between the chrysin and the polymer chitosan in the solid state. Fig. 1 shows the IR spectra of chrysin, chitosan and physical mixture.  The characteristic bands of chrysin were found for C= O at1710, C -H aromatic ring at 1670 and for C-C, C-O at 1226 and 988 respectively. The FTIR spectrum of physical mixture is seems to be the summation of chrysin and the polymer chitosan spectra. This showed that there is no interaction between chrysin and chitosan and hence they are compatible. 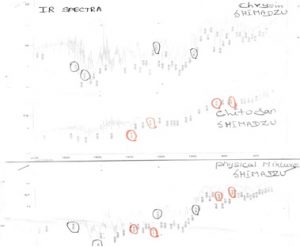 FIG. 1: IR SPECTRA OF CHRYSIN, CHITOSAN AND THEIR PHYSICAL MIXTURE.

Preparation of chrysin loaded chitosan nanoparticle NC: Chrysin loaded chitosan particles were prepared in five different batches by changing the concentration of polymer to 0.1%, 0.2%, 0.3%, 0.4%, 0.5%  respectively. The particle size determined in different experimental design was shown in Table 2. Particle size was determined based on the DLS technology  which involves the non invasive technique that evaluate the variations of light scattering due to brownian motion of nanoparticle and that relates the particle size via an autocorrection function 24. The particle size distribution pattern of nanoparticle  NC1, NC2, NC3, NC4 and NC5 were found to be 116.5, 262,175, 133 and 118.1 respectively. The polydispersity index ranges from 0.25 to 0.5, this shows that all the formulations are in broad distribution. Zeta potential indicates particle surface charge that in turn influence the performance in the blood circulation. When the zeta potential increases, the repulsive interaction will be larger, there by leading to the formation of more stable particles with more uniform distribution. 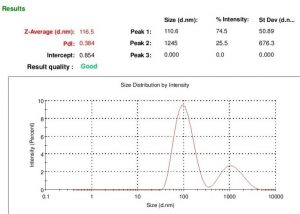 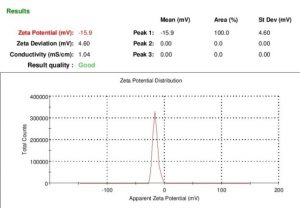 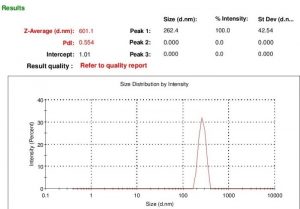 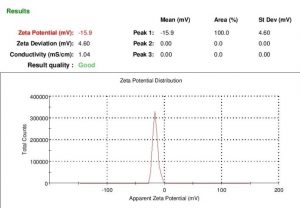 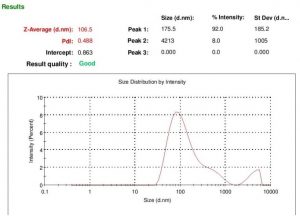 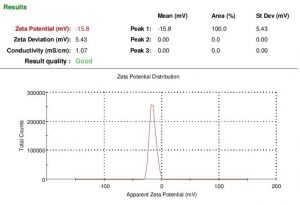 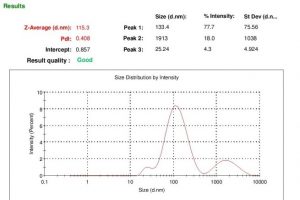 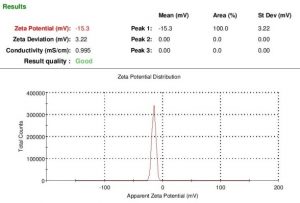 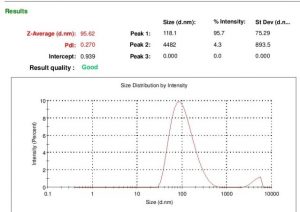 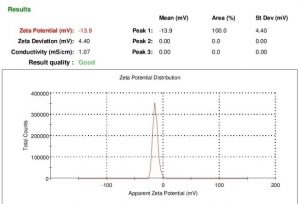 TABLE 3: IN VITRO RELEASE; REGRESSION COEFFICIENT FOR THE FORMULATION NC1-NC5 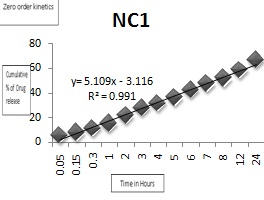 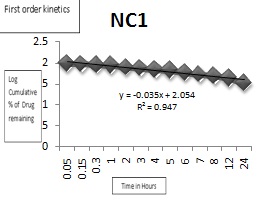 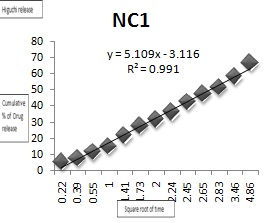 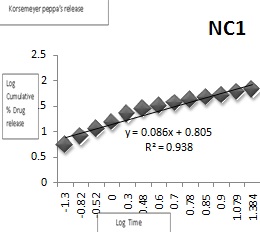 FIG. 3: IN VITRO RELEASE FOR THE FORMULATION NC1 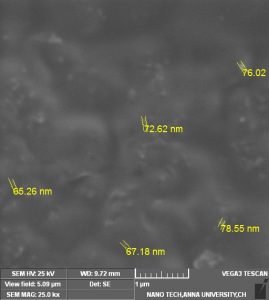 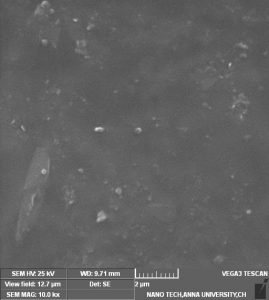 Visual examination of the TEM images (Fig. 5) indicated that the chrysin lodaded chitosan nanoparticle were spherical in shape. 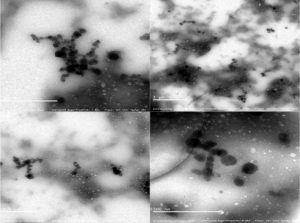 ACKNOWLEDGEMENTS: The author wish to thank Sri Ramachandra University for their financial support and guidance throughout this research work.