ABSTRACT: Cinnamaldehyde is the aldehyde that gives cinnamon its flavour and odour. It occurs naturally in the bark of cinnamon tree (Cinnamomum zeylanicum), a common Indian spice. The essential oil of cinnamon bark contains about 90% of cinnamaldehyde. It exists as a yellow oily liquid with a cinnamon odor and sweet taste and is traditionally known to have many medicinal properties, although the mechanism of action is not completely understood. Macrophages are one of the most important cells of the immune system and play important role in influencing the inflammation cascade process. The current study aimed towards understanding the role of this medicinal plant product on genes of the inflammatory pathways, especially in the context of macrophages. For this purpose, the effects of Cinnamaldehyde were studied on the macrophage cell line J774A.1. Our studies indicate that treatment of these cells with various concentrations of Cinnamaldehyde alters levels of the pro-inflammatory cytokine, IL-12. Further studies are required to get a better understanding of the molecular mechanisms by which Cinnamaldehyde may be able to impart its medicinal effects on the process of inflammatory response.

INTRODUCTION: A huge number of studies have shown the protective role played by various dietary plant sources in case of diseases such as diabetes, coronary heart disease, and cancer. Cinnamomum zeylanicum or Cinnamomum verum, belonging to the family Lauraceae, is one such plant 1. Native to Sri Lanka and a globally known common Indian spice, the bark of the cinnamon tree is traditionally used in Indian cooking. Several medicinal properties of this plant have been reported. They include protective functions such as anti-diabetic, anti-inflammatory, anti-microbial, and anti-cancer activity.

Studies have also shown that this plant can prevent neurological disorders and cardiovascular diseases, and lower levels of cholesterol and lipid 2, 3, 4. Cinnamaldehyde and trans-cinnamaldehyde are organic compounds found in cinnamon bark and are the main active ingredients of cinnamon. They are synthesized via the shikimate pathway and are primarily responsible for the distinctive strong flavor and odor found in the bark of this tree 5, 6, 7, 8, 9.

Non-communicable diseases (NCDs) are referred to as medical conditions that are not acquired through infection or contamination and include Cardiovascular Diseases (CVDs), hypertension (High Blood Pressure), diabetes, stroke, and cancer. There are beneficial health effects of cinnamon against a few of these NCDs. Cinnamaldehyde has shown to be effective against several cardio-vascular diseases. It has been shown to normalize the vascular contractility and prevent development of hypertension in insulin-deficient or resistant animals. It also prevents hyper-responsiveness to vasoconstrictor agents (Phenylephrine or KCl) and the hypo-responsiveness to vasodilatory agents in the aortic rings 10. Hypertension is one of the common NCDs that affect the world's population. It carries a high-risk factor for cardiovascular diseases, arteriosclerosis, myocardial infarction, end-stage renal disease, and various ocular disorders. Cinnamaldehyde has been known to reduce the risk of hypertension by reducing oxidative stress in mice. Cinnamaldehyde also has aldose reductase inhibition activities 11. With reference to diabetes, it has been found that cinnamon extract has insulin-like properties; the polyphenol type-A polymers from the cinnamon act as an insulin-like molecule. Moreover, another compound from hydroxyl-cinnamic acid derivatives, named naphthalene-methyl ester, has blood glucose-lowering effects 12. Cinnamaldehyde has also been found to impart protective effects in the case of cancer. Some of those studies have shown that Cinnamaldehyde can block nuclear factor-κB activation in immune cells. In one of those studies, treatment with Cinnamaldehyde was found to inhibit cell viability and proliferation and induce apoptosis concentration-dependently both in primary as well as immortalized immune cells 13, 14, 15. Since the signaling pathways/molecules by which cinnamaldehyde executes most of the actions are not yet understood clearly, the present study was performed to look into whether it has any effect on IL-12 expression levels in macrophages. Macrophages are a type of immune cell that is activated in response to an infection. It also has a critical role in the inflammation process.

Cinnamaldehyde Treatment: 5 × 106 cells were plated in 6-well plates and treated with various concentrations of Cinnamaldehyde (10 μM and 50 μM) in the presence of FBS-free medium.

RNA Isolation: Total RNA isolation was done from the cells using Trizol reagent (Invitrogen). 1 ml of Trizol reagent per 1 × 105 cells was added directly to the culture dish, and total RNA was isolated as per manufacturer’s protocol. In the end, the RNA was resuspended in 10 µl of RNase-free water.

cDNA Synthesis: cDNA was synthesized from the RNA isolated by Reverse Transcription Polymerase Chain Reaction. 500 ng of RNA per sample was used for cDNA synthesis, and the process was performed as per the manufacturer’s protocol. Finally, the cDNA, thus synthesized, was stored at -20 ºC.

RT-PCR and Agarose Gel Electrophoresis: RT-PCRs were performed using 1 µl cDNA synthesized (per sample) to study the expression profile of IL-12. β-actin, a housekeeping gene, was used as control. The PCR products were subjected to agarose gel electrophoresis for visualization. The primers sequences used are as follows: 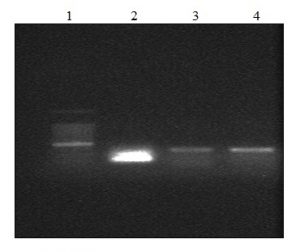 This study was aimed towards understanding whether Cinnamaldehyde, one of the main components present in the bark of a cinnamon tree, has any effect on any of the components of the inflammatory pathway. To date, not much is known about this aspect, although the medicinal roles of this compound have been manifested in various other diseases, such as diabetes, cancer, and cardiovascular diseases. In this study, we have made a preliminary attempt towards understanding the molecular mechanism by which Cinnama-delhyde may be able to impart its effect on inflammation if any. Our observations have revealed that the purified form of this compound increases expression of IL-12 in a concentration dependent manner. In conclusion, these data strongly indicate that Cinnamaldehyde may have a direct effect on various molecules of importance in the inflammatory pathway, and this effect may be carried out through the up-regulation of IL-12 in macrophages.

SOURCE OF FUNDING: Self