Categories Menu
Home » CLINICAL EVIDENCES OF OXIDATIVE STRESS AS A BIOMARKER IN VARIOUS TYPES OF CANCERS: A REVIEW

CLINICAL EVIDENCES OF OXIDATIVE STRESS AS A BIOMARKER IN VARIOUS TYPES OF CANCERS: A REVIEW

CLINICAL EVIDENCES OF OXIDATIVE STRESS AS A BIOMARKER IN VARIOUS TYPES OF CANCERS: A REVIEW

ABSTRACT: Free radicals play an effective role in the pathogenesis of different pathological diseases together with cancer. Potential biological targets for free radical attack comprise lipids, proteins and nucleic acids. Free radical induced lipid peroxidation causes a loss of cell homeostasis by modifying the structure and functions of cell membrane. The most important characteristic of lipid peroxidation is to cause a substantial DNA- MDA (Malondialdehyde) adducts by interacting with cellular DNA. Enzymatic antioxidants Superoxide dismutase (SOD), Catalase (CAT), Glutathione peroxidase (GPx) and non-enzymatic antioxidants vitamin E, Reduced glutathione (GSH) proceed synergistically with one another to detoxify the effects of lipid peroxidation. There is occurrence and contribution of oxidative stress in different types of cancer including, Ovarian cancer, Breast cancer, Oral cancer, Lung cancer, Leukemia, Cervical cancer, Prostate cancer, Gastric and Colon cancer which increase the pathogenesis and cause tissue damage in cancer. Lipid peroxidation and levels of enzymatic and non-enzymatic antioxidants can be used as markers of oxidative stress in various cancers.

INTRODUCTION:Oxidative stress is caused due to a disturbance in the balance between the production of reactive oxygen species (ROS) and efficiency of the antioxidant defense.

In other words, oxidative stress results if excessive production of ROS completely defeats the antioxidant defense system or if there is a significant decrease or lack of antioxidant defense 1. Potential biological targets for free radical attack include lipids, proteins and nucleic acids 2.

Excess generation of these oxygen free radicals and oxidants generate a phenomenon called oxidative stress which cause oxidative damage to biomolecules resulting in lipid peroxidation, mutagenesis and carcinogenesis. Reactive oxygen species plays an effective role in the pathogenesis of different pathological diseases including cancer 3, 4. Free radical induced lipid peroxidation causes a loss of cell homeostasis by modifying the structure and functions of cell membrane.

The most important characteristic of lipid peroxidation is to cause a considerable DNA-MDA adducts by interacting with cellular DNA 5, 6. Reactive Oxygen species (ROS) are essential for multiple normal physiological processes like cell differentiation 7, apoptosis 8, cell immunity 9, and cellular defense against microorganisms 10 at low concentrations.

Antioxidants: To counteract ROS induced oxidative stress, aerobic organism rely on defenses, including enzymes (Superoxide dismutase, Catalase), as well as on small molecular weight endogenous antioxidants which include Reduced glutathione (GSH) and total Thiols (T-SH) 11, 12. To this potential toxicity of free radicals the organism protects itself through different antioxidant defense systems 13. The antioxidants neutralize the free radicals, stopping the chain of propagation and reducing their harmful effects on the body 14, 15.

In the case of a weakening of such an antioxidant defense or excess production of free radicals, a state of oxidative stress occurs 16. Superoxide dismutase enzyme converts highly toxic superoxide molecules in to less toxic hydrogen peroxide molecule, Catalase enzyme converts hydrogen peroxide in to water and oxygen molecule. Other than enzymatic antioxidants some non-enzymatic antioxidants (Vitamin A, C and E) are also present to protect cells from oxidative damage. 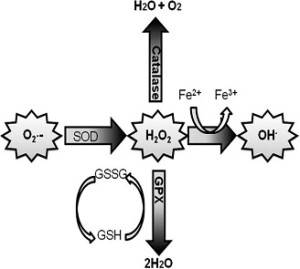 The low levels of SOD, CAT, vitamin C and vitamin E in the plasma of ovarian cancer patients may be due to their increased utilization to scavenge lipid peroxides as well as their confiscation by tumor cells.

Increased levels of lipid peroxidation may be due to excessive oxidative stress caused by nonstop ovulation or epithelial inflammation 26.

Erythrocytes from patients, despite of disease state, pre-malignant (low squamous intraepithelial lesion—LSIL and high squamous intraepithelial lesion—HSIL) or cancer, showed a significant 2–3 times increase in TBARS levels. Plasma vitamin C was lower in the carcinoma group. The reactivation index of δ-aminolevulinate dehydratase (δ-ALA-D) was higher in the patient group, when compared to control 36.

Plasma as well as erythrocyte MDA and plasma NO levels was higher in cervical cancer as compared to healthy controls, also antioxidant enzymes, Superoxide dismutase, Catalase and Glutathione peroxidase activities, were decreased whereas glutathione S-transferase activity was increased in cervical cancer patients 37.

Levels of plasma and erythrocytes lipid peroxidation TBARS are increased and levels of plasma and erythrocytes  vitamin E, Reduced glutathione, Glutathione peroxidase, Super-oxide dismutase and Catalase are found to be decreased, TBARS levels increases and antioxidant levels goes on decrease with increase in the stage of the oral cancer 40. Increased levels of lipid peroxidation with decrease in  levels of antioxidants such as  Superoxide dismutase, Catalase, reduced glutathione and Glutathione peroxidase was observed in the venous blood of oral squamous cell carcinoma patients as compared with the healthy controls, represents the increased levels of oxidative stress in oral cancer patients 41. A study on oral cancer patients found that Lipid peroxidation products like lipid hydroperoxide (LHP) and malondialdehyde (MDA) and nitric oxide products like Nitrite (NO2–), Nitrate (NO3–) and Total nitrite (TNO2–) were significantly elevated, whereas enzymatic and non-enzymatic antioxidants were significantly lowered in oral cavity cancer patients when compared to normal healthy subjects 42.

There is a significant increase of H2O2 and reduction in antioxidant capacity in the Exhaled breath condensate (EBC) of lung cancer patients shows the imbalance between levels of oxidants and antioxidants in lung cancer, which leads to increased oxidative stress. Oxidative stress is implicated in the development of lung cancer and may be an early marker of the disease 54. In Adinocarcinoma, increased Glutathione content and NAPDH oxidase activity, and decreased Myeloperoxidase activity with decreased levels of 8-oxo-dG (a marker for DNA damage) are found, the level of oxidative stress and antioxidant defense seems to be different between adenocarcinoma and squamous cell carcinoma 55.

In leukemia patients the plasma malonyldi-aldehyde and protein carbonyl levels were found to be elevated in both chronic phase (CML-CP) and accelerated phase (CML-AP) as compared to healthy volunteers, also the antioxidant status was found to be decreased in Chronic myeloid leukemia patients shows oxidative stress may be associated with the pathophysiology of Chronic myeloid leukemia 61. The T-AOC (Total antioxidant capacity) and concentrations of Glutathione peroxidase, Superoxide dismutase, and MAO (Mono amine oxidase) were lower and the concentrations of AOPP (advanced oxidation protein products), MDA (Malodealdihyde) and 8-OHdG were also higher in acute myeloid leukemia patients then healthy individuals 62.An imbalancein the antioxidant/prooxidant equilibrium in early stage leukemia patients with a significant higher SOS than that of the healthy control group have been observed 63.

Differences in prostate cancer incidence among various races, environment, diet, life style, genetic constitution and hormone of an individual/community are some of the contributing risk factors for occurrence of prostate cancer 67–69. Studies highlighted the altered prooxidant–antioxidant status in prostatic tissue of man, rat and also in cell lines, where the imbalance between these antagonist played a major role in the initiation of prostate carcinogenesis 70. Recent studies suggested that Nrf2 and several of its target genes are significantly down regulated in human prostate cancer and as a result, cells were continually exposed to increased oxidative stress and may have resulted in their progression to metastatic disease 71. 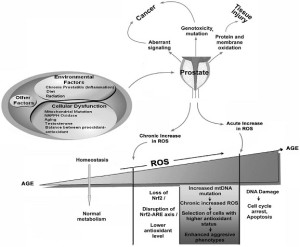 Recent research has also thrown light on GSH peroxidase enzyme which catalyzes the neutralization of peroxide via glutathione redox system. Circulating levels of GSH peroxidase in the plasma as well as in the prostate tissue are markedly decreased in prostate cancer biopsy specimens from patients 73, 74.

This was accompanied by a decrease in the content of SOD and NOx, and earlier recovery of detoxification and synthetic liver function. These findings point to intensification of oxidative stress and metabolic disorders in the malignant process, which is the basis for prescription of metabolic correction therapy 75.

SUMMARY: Oxidative stress is the condition of imbalance between the generation of free radicals and antioxidant defense system present in the cells to minimize the toxicity caused by free radicals in the cell. It has been shown above in the review that there is a condition of oxidative stress generated in patients of Oral cancer, Breast cancer, Cervical cancer, Lung cancer, ovarian cancer, Leukemia, Prostate cancer, Gastric cancer and Colon cancer. Oxidative stress a marker of tissue damage is found to be increase with the progression of the cancer which can be measure by the levels of Lipid peroxidation and various antioxidants in serum of cancer patients.