INTRODUCTION: Rapid growing in human ageing is becoming a public health problem in developed and developing countries. Mild cognitive impairment (MCI) might be at risk of developing dementia, critical for targeting preventative interventions 1. Demographic and clinical characteristics can predict the incident of MCI and might succeed to dementia 2. The most prominent aspects of human aging present memory declination phenomenon and that intellectual capacities began to diminish 3.

Thus, in the natural ageing declination in performance on daily tasks, transformation of information, taking proper decision, slow down of the process of execution and impairment of memory is observed 4. In traditional Ayurvedic texts, the effect of time period on human’s physical activities and on cognitive domain is well stated.

Accordingly, Medha (cognitive functions) starts to decline from the fourth decade of human’s life 5. To combat with health concerns in association to cognitive disorders, numbers of medicated ghee formulations are prescribed. Solid lipid nano- particles and liposomes with certain derived peptides have been shown to facilitate cellular uptake and drug transport across a model of the BBB 6. Thus it is assumed that medicated ghee formulations might be crossing BBB and produce desired target actions.

Vachadi ghrita (VG) is a medicated ghee formulation, advocated to maintain cognitive abilities in normalcy (Medha and Smritivardhak) 7. It comprises of eight herbal drugs along with cow ghee. In accordance to Ayurved, all contents are having specific actions towards CNS.

Moreover, in earlier studies the components of VG have been proven for their anti-depressant, anti-psychotic, anti oxidant, anti stress and nootropic activities and the potential of herbal drugs is well documented in published data 8, 9, 10, 11, 12.

In experimental animal studies anti-amnesic and nootropic activities of VG were confirmed 13. However, clinical investigation of VG hasn’t been completed till date to explore its action on human cognition. Therefore the goal of the study was to test the therapeutic potential of VG against cow ghee and plain control in healthy individual's learning and memory using PGI memory scale.

One part of paste was added to four parts of liquefied Go Ghrita (Cow Ghee), then sixteen parts of water was added to this mixture. The whole mixture was further heated on low flame till total water content was removed and active components of herbal drugs was extracted in Cow Ghee. The resultant product was then analyzed in laboratory using API parameters.

Clinical Trial: This clinical trial was conducted in the out-patient clinics. It was non randomized positive controlled trial. Before commencement of the study approval from institutional ethics committee was obtained, approval number is BVDU/Exam/13-23/2014-15. This trial was registered to CTRI with Ref/2015/12/010270 number.

Selection of Participants: Individuals' of 40 - 50 age groups of either sex, irrespective of socio economic status, serving in secondary and higher educational campuses as teaching faculty were selected. Healthy individuals’ with normal hematological values were included in the study. Participants suffering from hypertension, hypo or hyper thyroid, diabetes mellitus, asthma, obesity and other major diseases were excluded from the study. After giving complete information about the research work the consent was taken from all participants’.

On day zero, as per PGI memory scale test, participants’ were asked to perform some activities viz. information recall, forward-backward repetition of digits, sequential formation of sentences,  association of similar-dissimilar pairs, visual retention and recognition of pictures. With this method, the scores for each parameter of each participant from all three groups were recorded. General health assessment of each participant was done by using Ayurvedic case paper. A personal diary was given to participant and asked them to fill the points written in dairy viz daily marking of drug consumption, dropped drug doses, any change if they observed in physical parameters and mental attributes.

Effect of Vachadi ghrita and Cow Ghee on Participant’s Memory: Pre and post treatment scores of VG and cow ghee were statistically compared to assess post medicine effects on participant’s learning and memory. In addition, post treatment total scores of each group were also compared. The effect of drug treatments on each parameter of PGI memory scale was also investigated and further compared.

In a similar way during drug consumption, certain symptoms such as nausea, anorexia and indigestion were also noted.

Pre and post treatment scores of each parameter of PGI memory scale of three groups were also statistically analyzed by using student paired‘t’ test. Qualitative data in the form of percentage was presented. 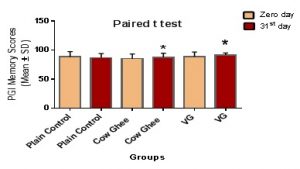 FIG. 1: BEFORE AND AFTER TREATMENT SCORES OF VACHADI GHRITA, COW GHEE AND PLAIN CONTROL GROUPS 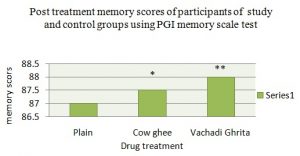 Effect of Drug Treatment on Other Parameters of PGI Memory Scale: After analysis of before and after treatment scores of recent memory, remote memory, attention and concentration, visual retention and recognition, significant effect was not observed for study as well as control drugs. 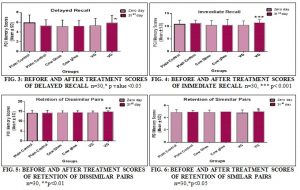 DISCUSSION: In India, the symptoms of cognitive impairment are attributed to normal aging and patients usually present late course of dementia with moderate to severe cognitive deterioration, thereby delaying the interventions 18. Thus, it is essential to protect elder people population against development of MCI and dementia. The preventive measures to proper treatment might improve cognitive functions in normalcy and prevent further harmful deficits. Traditional Ayurvedic repertory has provided different medicaments to support healthy state of cognition or to treat specific cognitive disorders. Vachadi ghrita is one of the medicated ghee formulations advised to improve intellect and memory in human being. In present study this formulation was administered to healthy persons for thirty days. The effect of the formulation on their cognitive abilities was tested through PGI memory scale test. PGI memory scale test is a short, simple, objective and valid test for testing of memory which is developed by the psychiatrists, neurologists and clinical psychologists working in India.

The participants enrolled in the study had not been taken any medicaments for improvement of memory as before. Adult participant’s learning and memory ability, by giving correct or incorrect answers for counter factual questions relatively shown to their cognitive skills. Participants of Vachadi ghrita and cow ghee groups imply significant change in pre and post treatment scores (p<0.05). VG drug has shown significant effect (p<0.01) on total scores when post treatment scores were compared with cow ghee and plain control group scores. These findings of the study hence represent positive effect of VG on healthy individual’s cognition.

The clarification for each parameter of PGI scale is well specified in manual; here mental balance indicates temporal sequencing with attention and concentration. Immediate and delayed recall parameters explain about person’s verbal working and short-term memory. Retention for similar pairs and dissimilar pair parameters elucidate human simple and new learning ability 19, 20. In this study also study drug (VG) has shown significant improvement in some of the parameters of PGI memory scale viz mental balance, delayed and immediate recall as well as on retention of similar and dissimilar pairs as compared to plain and cow ghee groups. Thus this result indicates that VG drug is effective to maintain or increase healthy person’s concentration, sequential attention, learning ability and short term memory process.

In Ayurved, the positive actions of the contents of study drug (Vachadi ghrita) towards human’s intellect and memory are well described. Besides, research works conducted on each contents of VG confirmed their antidepressant, antipsychotic, anti oxidant and nootropic activities in animal models 8, 9, 10, 11, 12. Therefore, in accordance to Ayurved theory, synergism of said ingredients of VG might be showing antioxidant and neuroprotective activities. In this study, we found the cumulative beneficial action of VG on healthy person’s learning and memory processes. Increase in appetite was the added result we found for study drug, this effect might be helpful to maintain the healthy metabolism at cellular level and facilitate to produce cognitive enhancer activity.

Thus, along with appropriate measures (periodic monitoring of patients) and providing lifestyle guidance, Vachadi ghrita would be a better choice as a prophylactic agent or as an adjuvant drug in the treatment of cognitive disorders. The drug might be helpful to prevent the progressive decline of memory in elderly people. It is useful to treat mild cognitive impairment along with conventional therapy. However, further studies are to be conducted in elderly healthy persons or in the patients of MCI to explore therapeutic effect of VG as a cognitive enhancer agent.

CONCLUSION: The therapeutic potential of Vachadi ghrita as a nootropic agent is explored through this clinical study, since VG showed positive effects on improvement of cognitive functions, assessed with PGI memory scale test.

ACKNOWLEDGEMENT: The authors would like to acknowledge Bharati Vidyapeeth Deemed to be University for their support to conduct this research work. The authors express thanks to all participants for their cooperation throughout the study period.

CONFLICT OF INTEREST: The authors have no conflict of interests to declare about publication of this paper