ABSTRACT: Man, the superior most of all species has always been remaining in a search of One Prime Goal: “The perfect health”. From Vedic era to space age, all the researches have been directed by the eminent scholars to achieve the same. Vrana (wound) is one of the critical conditions which have been managed by human being from starting of civilization. The present work is a substantial step for wound healing. Ingudi {Balanites aegyptiaca (Linn.) Delile} is well known plant used for wound healing  with their specific property like laghu, snigdha guna, tikta, katu Rasa, katu Vipaka, ushna Virya and krimighna Prabhava since ancient era. Not only in Ayurvedic literature, in Sanskrit literature also have we found its description for wound healing (Abhigyan shakuntalum 4/14).

INTRODUCTION: Ancient Acharyas and their counterparts in this era tried and are still trying their best to keep the man young and virile. Veda’s the source of divine knowledge, which has been enlightening the path of complete solace since ages. Vrana (wound) in Ayurveda has stated as “vrana gatra vichurnane” i.e. of tissue destruction and discolouration of viable tissue due to various etiology. Vrana is seen as debilitating and scaring disorder usually seen affecting the human being at any age.  Vrana is the most important and widely described chapter of Shalya Tantra. Sushruta – The father of surgery has scientifically classified it in a systemic manner whose wealth of clinical material and the principles of management are applicable even today.

Classification of traumatic wounds, Suddha Vrana, Nadi Vrana, Sadhya Vrana, Dagdha Vrana etc., their prognostic evaluation and management in the form of sixty upakrama which are from Apatarpana to Rakshavidhana2, insistence on primary suturing in clean wounds, avoidance of sepsis and excision of extruded omentum and careful suturing of intestinal perforation in the management of perforating abdominal wounds, etc. are remarkable as it is done in modern medicine these days 3. Clinically wounds are classified as Acute and Chronic wounds, depending on the manner and time frame of their healing. Proper healing of wounds is essential for the restoration of disrupted anatomical continuity and disturbed functional status of the skin (Brunicardi et al., 2010). Wound healing is an evolutionarily conserved, complex, well-orchestrated, multicellular process that, in skin, aims at barrier restoration. This process involves the coordinated efforts of several cell types including platelets, keratinocytes, macrophages, endothelial cells and fibroblasts.

The very fact that the subject of wound healing is under study from the days of SuÐruta denotes its magnitude. During the early part of this century, research on wound healing was largely concerned with qualitative description of histological preparations and changes in the macroscopic appearance of wound during its progression towords final scar. No wonder, many researchers, all over the world are trying to evolve remedies which are effective in wound healing, but something is concrete still awaited. Ingudi Balanites aegyptiaca (Linn) Delile. (Hindi- Hingen, Hingan, Hingol, Hingot) 4 belonging to family Simaroubaceae. Kalidasa mentioned the presence of number of trees of ‘Ingudi’ where saints exist and also explained its uses in his treatise Raghuvansha (14.81).Hollow fruit of ‘Ingudi’ was used as container for collyrium- Kadambari (643). Seeds of ‘Ingudi’ were taken out on breaking the fruits by stones. People living in forest areas used ‘Ingudi’ taila as hair oil and for external application in wounds- Abhigyana Shakuntalam (4.14 and 1.14).

MATERIALS AND METHODS: The present study has been planned to evaluate the “Ingudi Taila”for its possible wound healing effect on vrana (wound) exclusively on clinical parameters. Drug was collected from rural area of district Itawah, U.P and  identified by the teacher of Dravya Guna department in faculty of Ayurveda B.H.U. Ingudi beeja taila  was prepared  in tila taila in Ayurvedic pharmacy of BHU according to authentic taila paka vidhi (Reference No DG/2013-14/351, date 18-11-13) (Form No. 429).

RESULTS AND DISCUSSION: Total of 40 patients of wound more than 6 weeks attending the Dravyaguna OPD, Shalya OPD and General Surgery OPD of Sir Sundar lal, Hospital BHU, Varanasi constituted the subject material for this study. Forty patients were registered for the study and 38 patients completed the study among 40. Two were lost to follow up. So they were excluded from the study. The observation includes:

TABLE 1: DISTRIBUTION OF PATIENTS ACCORDING AGE

TABLE 4: TABLE SHOWING DISTRIBUTION OF PATIENTS ACCORDING TO RELIGION

TABLE 5: TABLE SHOWING DISTRIBUTION OF PATIENTS ACCORDING TO HABITAT

All the cases were of >6 weeks of duration. In Group I & Group II maximum cases belonged to the range of 46-90 days. Rest of the cases is more or less equally distributed, except in group II. Eight patients present in the range of 91-135 days.

TABLE 6: DISTRIBUTION OF THE PATIENTS ACCORDING TO THE DURATION OF THE WOUND

TABLE 7: ANATOMICAL LOCATION OF THE WOUND ACC. TO GROUPS

TABLE 9: 50% REDUCTION IN AREA AFTER TREATMENT 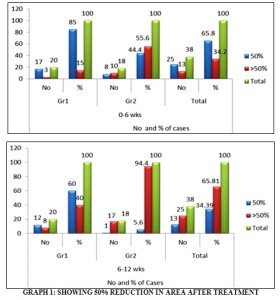 Antimicrobial result shown in above table 11 & 12 revealed the presence of antimicrobial activity of the extract at concentrations 100 mg/ml and 200mg/ml. Significant zone of inhibition was observed at different concentration against S.aureus  and P.aeruginosa i.e. 12.43 ± 0.84 and 11.34 ± 0.47 with minimum inhibitory concentration of 12.5 and 25 mg/ml5,6.

Probable mode of action of the drug: On the basis of above clinical (subjective and objective) findings probable mode of action of trial drug on vraÆa can be hypothetically postulated. In earlier phase the drug helps to expel out the slough and necrotic tissue due to property of Tikta rasa (kleda- medo-vasa-puya-upshosana). Further drug has reduced excessive exudation by decreasing inflammation due to Katu rasa (shvayathu-uphanti). Katu and Tikta rasa reduced bacterial load by its krimighna property (krimina-hinasti). Katu rasa also dissolve the haemorrhagic clots (shodita-sanghata-bhinatti). Katu rasa makes the level of scar at level of skin (vrananavsadayati). Katu rasa removes the infected tissue by lekhana karma (mansa-vilakhati).

This facilitates wound healing keeping in view all characters of drug as mentioned above, the probable action of drug seems to be helpful in debriding and healing of wound which may be due to making the wound clean and free from toxin and also due to increasing microcirculation in wound area.

Therefore, it facilitates wound healing by regeneration and organization of healthy granulation and epitheliazation.

CONCLUSION: There are so many compound drugs given in our texts which are needed to be evaluated and established with scientific manner. The present work is a substantial step for wound healing as it has not been explored yet for its possible role in wound healing.

On the basis of these findings it can be concluded that Ingudi oil is a good wound healer. It was already said that non-healing and chronic wound are mostly concerned with infections, as maximum patients involved during management of wound. So by all above references it has been scientifically proved that IÉgudÍ oil which is being used for ancient time is a potent healing promoting drug.