ABSTRACT: Coleus forskohlii is an herb historically used in Ayurvedic medicine. Nowadays Coleus forskohlii is used as a fat burning supplement in various formulations and available in the Indian market. Forskolin the main constituent of this plant is used to treat allergies, skin conditions such as eczema and psoriasis, painful menstrual periods, irritable bowel syndrome (IBS), urinary tract infection (UTI), bladder infections, advanced cancer, blood clots, sexual problem in men, insomnia, and convulsions. Healthcare providers sometimes give forskolin intravenously (by IV) for heart failure. Some people breathe in (inhale) forskolin powder for asthma. Forskolin drops are used in the eyes to treat glaucoma. Because of its wide use, this plant some time been adulterated with its species and other varieties. The standardisation parameters are important for this plant in every herbal formulation. With the developments in modern instrumental methods it is high time for the herbal drug manufacturers to come out with the standard level of this drug to be included in the formulation. An extensive study of phytochemical constituents reported from Coleus forskohlii and pharmacological activities carried out are enlisted in this article.

INTRODUCTION: Medicinal plants are known as sources of phytochemicals, which are widely sought after worldwide for their natural properties. They are of great significance to the health of individuals and communities 1. In many countries, herbal remedies are making a comeback as an alternative to modern medicine. India is one of the twelve mega biodiversity hot spot regions of the world and one fifth of all plants found in India are used for medicinal purpose 2. Coeleus forskholii Briq. [Syn. Coeleus barbatus (Andr.) Benth] belonging to the family Lamiaceae is indigenous to India 3.

The Indian herbal industries recognize it as most medicinally and economically important. Tuberous roots of coleus are found to be a rich source of Forskolin (Coleonol) 4.  Forskolin has a unique property of activating almost all hormone sensitive adenylate cyclase enzymes in a biological system 5. It’s used as a potential drug for hypertension, congestive cardiac failure, respiratory disorders, eczema, painful urination, colic, convulsions and insomnia 6.  Forskolin is reported to be useful in the treatment of glaucoma, asthma and certain type of cancers 7. In addition, it has been shown to have anti-inflammatory property 8.

The genus Coleus was first described by De Loureiro in the year 1970. The name Coleus is derived from the Greek word Koleos, which means sheath around the style 9. The species name forskohlii was given to commemorate the Finnish botanist, Forskel. More than 150 species belong to genus Coleus.

In India, the major medicinal species of Coleus is the tuberous C. forskohlii; C. amboinicus, C. blumei, C. zeylanicus, C. malabaricus and C. scutellaroides and other species are mainly used to treat dysentery and digestive disorders 10, 11. C. forskohlii, apart from its medicinal use is also used as a potent source of essential oil 12. The essential oil present in tubers has an attractive and delicate odour with a spicy note 13. The essential oil has potential use in the food flavouring industry and can be used as an antimicrobial agent 14.

The focus of this review is to provide information on the advancement in the ethnopharmacological, phytochemical, pharmacological and toxicological profile of Coleus forskohlii.

Plant Profile: Coleus forskohlii is indigenous to India 3 and is recorded in Ayurvedic Materia Medica under the Sanskrit name ‘Makandi’ and ‘Mayani’12, 15.

Geographical Distribution: Coleus forskohlii is an aromatic herbaceous species of medicinal importance. Indian sub- continent is considered as the place of origin of C. forskohlii 4, 12. It grows wild in the sub-tropical warm temperate climates of India, Nepal, Burma, Sri Lanka and Thailand. Apparently, it has been distributed to Egypt, Arabia, Ethiopia, tropical East Africa and Brazil11, 18, 19. In India, the crop is cultivated in the parts of Gujarat, Maharashtra, Rajasthan, Karnataka and Tamil Nadu. In Tamil Nadu, it is approximately grown in Salem, Dharmapuri, Trichy, Erode, Coimbatore and Dindigul districts of 6000 acres. It grows wild in the Himalayan region from the Shimla hills extending throughout the Kumaon and Garhrwal hills, Parasnath hills of Bihar and Western Ghats 19. 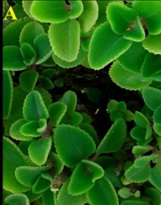 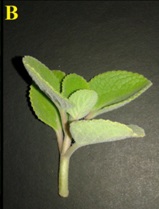 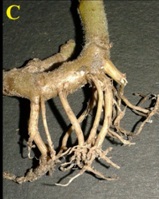 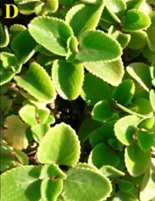 Ethnnopharmacology: Traditionally, the roots have been used as condiments in pickles and also for medicinal purposes by the ayurvedic schools of medicines 20. Root juice is given to children suffering from constipation 21. Kothas, the native tribes of Trichigadi (Kota) in Nilgiri, South India consider the decoction of tuberous roots as tonic 22. Ethnomedicinal uses of Coleus forskohlii for relief of cough, eczema, skin infections, tumors and boils were also reported 23. In Ayurvedic system of medicine, Coleus forskohlii has been used to treat hypertension, congestive heart failure, eczema, colic, respiratory disorders, painful urination, insomnia, and convulsions, asthma, bronchitis, intestinal disorders, burning sensation, constipation, epilepsy and angina 20.Clinical studies of the plant and the forskolin constituent support these traditional uses, but also indicate that it may have therapeutic benefit in psoriasis, and prevention of cancer metastases 8.

Coleol and coleosol were isolated from the roots of C. forskohlii 32. In the Kenyan species coleon O and plectrin were reported from their leaves 33. A study on whole plant extract conducted by Shan and Kong 34 in the year 2006, reports the presence of 3-hydroxy forskolin and 3-hydroxyisoforskolin.

TABLE 2: THE DITERPENOIDS ISOLATED FROM COLEUS FORSKOHLII ALONG WITH THEIR STRUCTURES AND PLANT PARTS USED

Pharmacological Profile: Coleus forskohlii has been used as a potential drug for hypertension, congestive cardiac failure, respiratory disorders, painful urination, colic, convulsions and insomnia 6. It has been shown to have anti-inflammatory property as well 8. Clinical studies of the plant and the forskolin constituent support these traditional uses but also indicate that it may have therapeutic benefit in asthma, angina, psoriasis, and prevention of cancer metastases. The pharmacological studies carried out so far on Coleus forskohlii are given in Table 3.

Toxicology: Coleus forskohlii and forskolin extracts have an excellent safety profile and are generally non-toxic or have no side effects at the recommended dosage 99. Sclareol isolated from C. forskohlii reported to be non–cytotoxic to resting human peripheral blood mononuclear leukocytes and have LD50 > 5mg/kg in rat 100. The study on forskolin showed that it was extremely safe with an oral LD50 of 3100 mg/kg 101. Hydroalcoholic extract of Coleus forskohlii has been shown to interfere with embryonic implantation and to delay fetal development 102.

CONCLUSION: India is the leading exporter of Coleus forskohlii extracts and its products to several countries. The main users of Coleus are United States, Poland, South Korea, Australia, Japan, Italy, Spain, South Africa and Canada.  Indian herbal industries has to utilise the opportunity by providing the quality formulations by standardising the product with respect to the marker compounds. There is an enormous opportunities to market Coleus forskohlii and its formulations in other countries too. Department of Ayush and other Government governing bodies have to encourage the herbal drug manufacturers to set up the quality control parameters.

ACKNOWLEDGEMENT: The authors are highly thankful to Prof. Dr. J. Saravanan, Principal, PES College of Pharmacy for the needful support.