INTRODUCTION: Cancer is a group of diseases involving abnormal cell growth with the potential to invade or spread to other parts of the body. It has become a big threat to human beings globally. The high mortality rate among cancer patients is an indication of the limited efficiency of the current therapies including radiation therapy, chemotherapy, immunotherapy and surgery.

In recent years, focus on plant research by scientists and pharmacologists has increased all over the world and a large body of evidence has been accumulated to highlight the immense potential of medicinal plants used in various traditional systems of medicine 1, 2, 3. Plants-derived compounds such as Beta carotene, Alpha-tocopherol, Alanine, fibre, Caffeic acid, Tannin, Kaempferol, Ascorbic acid, Limonene, Daidzein, Rutin, and niacin have played an important role in the development of several clinically useful anticancer agents 4.  Despite this encouraging preamble and the abundant literature describing the molecular mechanisms triggered by phytochemicals to inhibit cell growth and induce apoptosis in cancer cells, only a few of them entered clinical trials. So, the present study focuses on bioactive compounds found in the Fabaceae family which leads to cancer treatment. Further, the present study will explain the putative mechanism(s) of action of largely studied phytoresources from in vitro and in vivo studies, and the current status of their clinical applications in view of their realistic adoption as single chemotherapeutic agents or as chemosensitizers, in association with canonical and novel anticancer drugs.

In the present study, the bioactive phytochemicals which are having potential of cancer treatment and cancer prevention were manually mining from publically available phytochemical databases (Dr. Duke’s phytochemistry and ethnobotanical database (www.ars-grin.gov/duke).

Collection and mining of literatures of bioactive compounds as therapeutic agents:

The literatures related to anticancer, antitumor cancer preventive activities of phytoresources were collected from publically available online sources.  The full texts of peer-reviewed scientific publications in a variety of journal were manually mining from the online sources such as Google scholar (http://scholar.google.co.in/) and pubmed (http://www.ncbi.nlm.nih.gov/pubmed). The said journal was selected to capture the greatest quantity of high-quality data in a cost, and time-effective manner. From each publication, details of the compounds tested, the assays performed and any target information for these assays were abstracted.

Cajanus cajan is commonly called Pigeon pea. It is a perennial shrub. There were 19 phytochemical compounds reported to have the ability of cancer treatment (Table 3). They found in leaf, fruit and seed of this plant. Among them, 89.47% (17) of compounds were reported that they possess cancer preventive activity. Four (21.05%) of them were reported as antitumor agents (Table 2 and Fig. 1). Apart from, Beta carotene is a single compound that possesses 3 activities such as anticancer, antitumor and cancer preventive activities. Root of Cajanus cajan plant arrested the cell cycle in the G2/m phase and induced apoptosis via a relative oxygen species (ROS) mediated mitochondria-dependent pathway 8.

Crotalaria juncea is commonly called as Sun hemp. It is an herb. It has 5 cancer treatment compounds (Table 3). It includes 3 antitumour and 2 cancer preventive chemical compounds (Table 2 and Fig.1). Leaf extracts of C. juncea exhibited anticancer activity on human cervical cancer cell line. It might be due to the presence of the bioactive compounds 9.

Mimosa pudica is a pantropical weed which is commonly called as sensitive plant. It is a creeping annual or perennial herb. It contains eight phytochemical compounds with cancer treatment property. All these compounds possess cancer preventive activities. Among them, 3 were antitumour and 2 were anticancer agents (Table 2 & 3 and Fig.1). Flavanoids isolated from M. pudica has the high cytotoxic effect against MCF-7 human breast cancer cell line 11. ITME (2011) reported that isolated 6 -glycosylflavone from Mimosa pudica possesses antitumor and antiproliferation activity on MCF-7 breast cancer cell line 12. The pure compound L-Mimosine and hydroalcoholic extract of Mimosa pudica has antiproliferation activity on Lymphoma Daudi cells 13. The methanolic extract of M. pudica aerial part had cytotoxic activity 14.

Pisum sativum is commonly called as Pea. It is an herbaceous plant. Root, fruit and seed of P. sativum has 44 phytochemical compounds with cancer treatment properties (Table 3). Among them, 39 compounds, 17 compounds, 5 compounds, and 2 compounds were reported as cancer preventive, antitumour, anticancer and anticarcinogenic agents (Table 2 and Fig. 1). Methanolic extract of P. sativum showed anticancer activity against CaSki cells with IC50 value of 14.8 15.  Asperagenase enzyme isolated from P. sativum has a cytotoxic effect against L20B Tumor cell line 16.

Psoralea esculenta is commonly called Indian turnip. It is an herbaceous perennial plant. It has 8 phytochemical compounds with cancer treatment properties (Table 3). Beta carotene possesses anticancer activity and other 7 compounds of this plant possess cancer preventive activity. Although, this plant bears bioactive phytochemicals with anticancer, antitumor anticarcinogenic and cancer preventive activities compounds, there was no scientific reports available regarding its cancer treatment property. 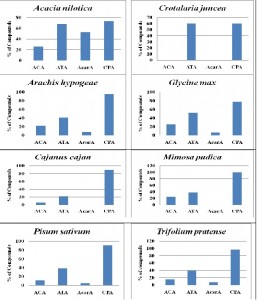 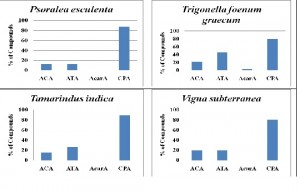 Vigna subterranea commonly called Ground Bean. It is an annual, creeping lugume with glabrous, trifoliate leaves. It has 5 phytochemical compounds with anticancer activities (Table 3). V. subterranean showed preventive effect on lung cancer and liver cancer induced by morphine and sodium nitrite 21. Several animal studies of chemical induced carcinogenesis demonstrated that phytochemicals are able to inhibit cancer development (pre-initiation) and also able to cure cancer 22, 23, 24. Due to the variety of their physiological roles in plant tissues in regulating enzymes involved in cell metabolism and in mechanisms of defence against foreign agents (radiations, viruses, parasites), phytochemicals have been associated to pleiotropic effects in animal cells. Phytochemicals attracted scientists’ interests since the demonstration that their biological targets in mammalian cells were the same involved in inflammatory processes and oncogenic transformation, such alterations of cell cycle control, apoptosis evasion, angiogenesis and metastases.

In addition, a large number of epidemiological studies suggested that a daily intake of phytochemicals can reduce the incidence of several types of cancers 25.

CONCLUSION: In the present study, the anticancer activities of a group of phytochemicals representing good candidates for chemopreventive and chemotherapeutic applications have been reviewed. They have been selected from the available literatures. All compounds given in this paper are commonly found in the edible plants. They are cultivated by the farmers and some them naturally grow. All of them are available in the Indian vegetative environment. Well documented the presence of anticancer activities of these plants was supported by various experimental models, namely cell cultures and animal models of induced carcinogenicity. These molecules are largely cited in the current literatures and their activities are often associated with the term chemoprevention. The results of the present study may provide a foundation for designing new drug to ascertain the full chemopreventive and chemotherapeutic efficacy of phytochemicals.