INTRODUCTION: The oral route is considered to be most convenient for administration of drugs to patients. Oral administration of conventional dosage forms normally dissolves in the stomach fluid or intestinal fluid and absorb from these regions of the GIT depends upon the physicochemical properties of the drug. Natural polysaccharides are extensively used for the development of solid oral dosage forms for colonic delivery of drugs 1.

Various bacteria present in the colon secretes many enzymes which can cause hydrolytic cleavage of glycosidic bonds e.g. β-D-galactosidase, amylase, pectinase, β-D- glucosidase, dextranase, α-D-xylosidase 2. These polymers are inexpensive and are available in a variety of structures.

Linear polysaccharides remains intact in stomach and small intestine but the bacteria of human colon degrades them and thus make them potentially useful in colon targeted drug delivery systems 3.

Guar gum is derived from the seeds of the cyomopsis tetragonolobus (Fam. Leguminosae). Chemically, guar gum is a polysaccharide composed of the sugars galactose and mannose. The backbone is a linear chain of β 1, 4-linked mannose residues to which galactose residues are 1, 6-linked at every second mannose, forming short side-branches [Figure 1] 4. 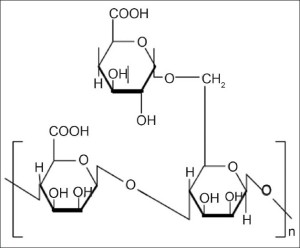 FIGURE A: STRUCTURE OF GUAR GUM

Pectin is a linear, heterogeneous polysaccharide which is mainly composed of galacturonic acid and its methyl ester. These are predominantly linear polymers of mainly (1→4) linked D-galacturonic acid residue interrupted by 1, 2-linked L-rhamnose residue with a few hundred to about one thousand building blocks per molecule [Figure 2] 5 . 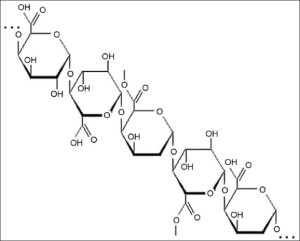 Coating with polymers: The intact molecule can be delivered to the colon without absorbing at the upper part of the intestine by coating of the drug molecule with the suitable polymers, which degrade only in the colon.

Method:  (Graphical Method was described in Graph: 1 and Graph: 2) 5 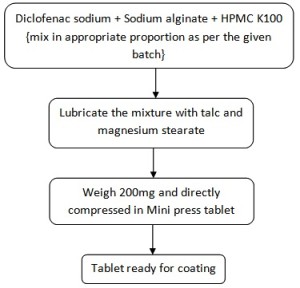 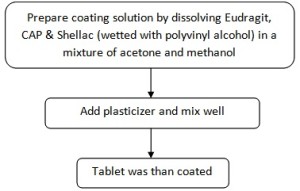 In-Vitro Dissolution Studies: The USP 24 (8) method for enteric-coated tablets (basket method, 75 rpm, 37 _ 0.5°C) using a USP dissolution test apparatus was used for all experiments. For the initial 2 h, the study was conducted in 750 ml of 0.1 mol L–1 HCl, followed by dissolution at a pH of 6.8 (adjusted by addition of 250 mL of 0.2 M trisodium phosphate) (8–11). Aliquots were collected manually at predetermined time intervals and analyzed for indomethacin using a UV-visible spectrophotometer at a _max of 276 nm (Shimadzu 1601, Japan).

RESULTS AND DISCUSSION: All the enteric-coated systems showed no drug release in the first 2 h in the simulated gastric environment. Ethyl cellulose-coated tablets also showed negligible drug re- lease in the initial 2 h of dissolution. Afterwards, a different drug release profile was evident for each polymer. 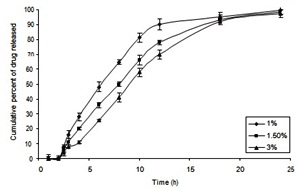 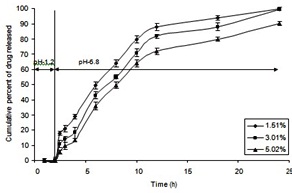 A total of 90% drug was released in the next 20 h. The results for CAP are also in agreement with the studies con- ducted by Levine et al. 15, since they also found the usefulness of this polymer for de livery   of beclomethasone dipropionate to the colon. This may be attributed to the fact that the dissolution medium (pH 6.8) which is well above the pH of CAP solubilization. 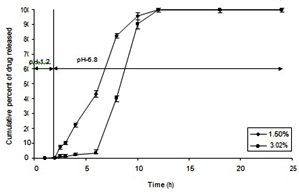 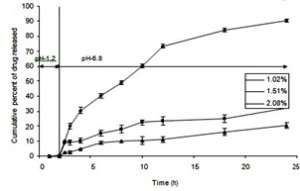 The hardness of tablet was measured by the Monsanto hardness tester and it gives all formulation in range 5-6 kg/cm3. We also measured the friability of tablets by Roche friability machine its result was comply.

CONCLUSION: At a coat  concentration of 3%, shellac  provided the  most  appropriate polymer coat for colon  specific  drug delivery in the  present study, which  may  be useful  for local colonic pathologies and  for systemic drug delivery. Shellac is a natural polymer that is also abundantly available and cost effective.  Moreover, the study shows that it provides a site-specific drug delivery. Variation in shellac coat thickness can facilitate drug delivery to terminal ileum, distal or proximal colon.