INTRODUCTION: Testosterone, a 19-carbon steroid secreted by the testis, is the predominant androgen in most mammalian species. Testosterone plays a critical role in mammalian reproduction. It is essential for maintaining sexual function, germ cell development, and accessory sex organs. It is produced in the testis by a heterogeneous group of cells that includes the adult Leydig cells. Testosterone secretion by Leydig cells is under the control of Luteinizing Hormone.

At the inner mitochondrial membrane, cholesterol associates with the Cyt P450scc enzyme, and is converted to pregnenolone through a series of hydroxylation reactions 2. Pregnenolone is translocated from the mitochondria to the smooth endoplasmic reticulum (SER) where it is converted to testosterone by the actions of two important enzymes; 3β-hydroxysteroid dehydrogenase (3β-HSD) and17β-hydroxysteroid dehydrogenase (17β-HSD).

Nicotine; the principal alkaloid in tobacco is reported to enhance the synthesis of cholesterol, triglycerides, phospholipids and free fatty acids in the testes and increases peroxidative damage 3. Studies have shown that it is a testicular toxin 4. Statins are well known HMG CoA inhibitors used to treat hypercholesterolemia. It is reported that monthly statin prescriptions have increased from 45.8 to 84.1 per 1,000 patients with coronary heart disease. The proportion of the Indian population receiving a defined daily statin dose increased from 3.35 percent to 7.78 percent 5. Independent of their lipid lowering properties, statins have been shown to exert pleiotropic effects on endothelial function, vascular inflammation, immunomodulation, bone mineralization etc 6. In vitro studies with simvastatin have been found to reduce testosterone production7.

Since cholesterol is the precursor of testosterone an optimum amount of cholesterol is essential for the normal reproductive function. Nicotine induces hypercholesterolemia and statin reduces cholesterol levels. So we were interested to study how the drug-drug interaction of nicotine and statin would affect the testicular expression of steroidogenic enzymes in experimental rats. In our study we focused on the changes in testosterone synthesis pathway of male rats co administered with atorvastatin and nicotine.

Male albino rats (Sprague Dawley strain, average weight of 175 ± 25gm) were selected and housed in polypropylene cages. The cages were kept in a room at 28°C-32°C. The light cycle was 12h light and 12h dark. Animals were handled as per the laboratory animal welfare guidelines.

Animals were divided into four groups as follows:

Atorvastatin (Sigma-Aldrich, St. Louis, MO, USA) was freshly dissolved in distilled water and given orally by gastric tube. Nicotine was injected intraperitonially. The dose of the nicotine was selected from previous studies 8. Rats were fed with standard laboratory diet supplied by Ashirwad Pvt Ltd., India and water was given ad libitum. The duration of the experiment was 60 days. Animal experiments were approved by the Institutional Animal Ethics Committee [IAEC No-KU-25/2011-BC-MI (31)]. At the end of the experiment period (60days), the animals were sacrificed after overnight fasting. Then testes and epididymis were dissected out and cleaned with ice-cold saline, blotted dry and immediately transferred to ice-cold containers for various biochemical evaluations. Blood was collected and testosterone content was analysed using separated serum.

Total RNA was isolated from the testes using TRI reagent (Sigma Aldrich) by the method described by Chomczynski and Sacchi16.

The isolated RNA was used for Reverse Transcriptase-Polymerase Chain reaction (RTPCR) to quantify the expression of 3β-HSD, 17β-HSD and Steroidogenic Acute Regulatory Protein (StAR protein). Total RNA was reverse transcribed and PCR was performed using Eppendorf RT-PCR kit with gene-specific primers. Sequence of the primers is given in Table 1. PCR mixture was resolved on 2% agarose gel containing ethidium bromide. Then the gels were subjected to densitometric scanning (Bio-Rad Gel Doc, California, USA) to determine the OD of each and then normalized against an internal control, Glyceraldehyde-3-phosphate dehydrogenase (GAPDH) using Quantity One imaging software.

Testes were kept in 10% formalin for 2 weeks, then dehydrated and embedded in paraffin blocks. Each paraffin block was sectioned into 5μm thickness stained with hematoxylin and eosin, and evaluated histologically using a light microscope and an image analyser (Leica Application Suit, Leica Microsystems, India). Each tissue section was assessed for histological changes such as epithelial atrophy, interstitial oedema and vacuoles of the epithelial cells.

Statistical analyses were carried out using the Statistical Package for Social Science (SPSS Inc. Chicago, IL, USA) version 17.0. Data with normal distribution and homogenous variance were analysed using One-way analysis of variance (ANOVA). Pair fed comparisons between the groups was made by Duncan’s multiple range test p≤0.05 was considered to be significant.

The HMG CoA/Mevalonate ratio was measured. Lower ratio indicates higher enzyme activity. The activity of HMG CoA reductase was significantly decreased in atorvastatin treated group (Fig.1) in comparison to the control group. Significantly higher activity was seen in the nicotine treated group when compared to atorvastatin and control groups. Co administration of nicotine with statin decreased the activity in comparison to the nicotine group. 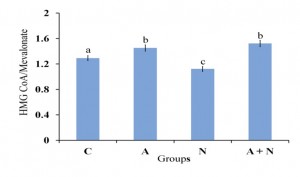 Concentration of Cholesterol in testes: 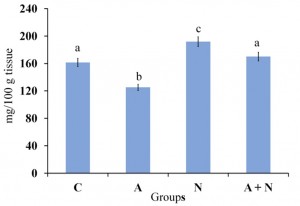 Activities of 3β-HSD and 17β-HSD in testes: 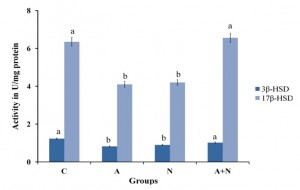 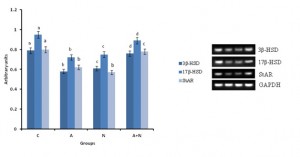 Expressions of 3β-HSD, 17β-HSD and StAR protien were analysed in the cytoplasmic fraction of testis by agarose gel electrophoresis and the intensities of the bands were compared with that of the intensities of Glyceraldehyde 3-Phospho Dehydrogenase bands expressed in the samples. Intensities of the bands were quantified using Biorad gel doc and plotted. The results presented are average of quadruplicate experiments, ± SEM statistically significant at P<0.05

Concentration of total testosterone in serum: 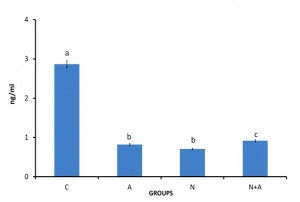 Values are expressed as mean ±SEM of six rats in each group.

Values not sharing a common superscript differ significantly at p< 0.05 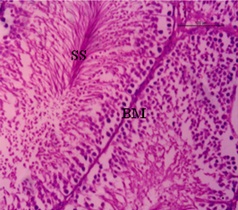 FIG: 6(a) MICROGRAPH OF TESTES OF THE CONTROL GROUP ORIGINAL MAGNIFICATION (40x) 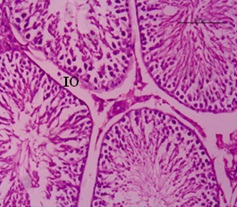 FIG: 6(b) MICROGRAPH OF TESTES OF THE ATORVASTATIN TREATED GROUP ORIGINAL MAGNIFICATION (40x)

But atorvastatin treated rats show interstitial oedema but no other signs of testicular damage have been found. IO: Intestetial oedema 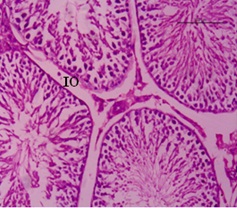 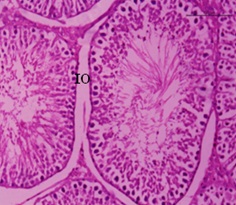 DISCUSSION: Testosterone is the key hormone that plays a significant role in male reproductive function. In this study we focused on the influence of co administration of nicotine and atorvastatin on the biosynthesis of testosterone. Low levels of testosterone were observed in the statin and nicotine treated groups. This is due to the suppression of its biosynthesis since both activities and mRNA expressions of 3β-HSD and 17β-HSD were lower in these groups.

Cholesterol is the precursor for the synthesis of testosterone. In agreement with the previous studies 17, 18 its level was reduced in the statin administered group (Fig. 2). This was due to the inhibition of HMG CoA reductase activity. This may also be a contributory factor for the reduced biosynthesis of testosterone in the statin group. As reported nicotine administration resulted in significantly increased activity of HMG CoA and increased level of testicular cholesterol 7. Co administration of atorvastatin reduced cholesterol level induced by nicotine by inhibiting HMG CoA reductase.

Delivery of cholesterol to the inner mitochondrial membrane is the rate-limiting step in steriodogenesis 19. Therefore regulation of testosterone synthesis must be controlled by factors involved in translocation of cholesterol. A range of proteins have been implicated including START domain proteins such as MLN64 and StAR with roles in targeting cholesterol to the mitochondria 20. So we had analysed the mRNA expression level of StAR protein in testis and it was found to decrease significantly both in atorvastatin and nicotine group when compared to control group (Fig.4).

This is in line with previous studies 21. It had been proved that the level of StAR protein in the Leydig cells significantly affects the testosterone production22. Co administration of nicotine and statin enhanced the expression of StAR protein in comparison with nicotine indicating increased delivery of cholesterol for testosterone biosynthesis. This supports the enhanced cholesterol and testosterone levels in the coadministered group. Cholesterol biosynthesis was enhanced in the nicotine group as evidenced by the increased activity of HMG CoA reductase (Fig. 1) and elevated level of cholesterol. But this cholesterol was not channelled for the production of testosterone due to the reduced activities of 3β-HSD and 17β-HSD. This is in agreement with the previous studies of Seema et al that nicotine suppresses testicular androgenic enzyme 8. We also observed significantly increased lipid peroxidation products in nicotine treated group compared to control. It is well known that nicotine can induce increased production of reactive oxygen species and thereby induce testicular oxidative stress 3. In co administered group atorvastatin reduced lipid peroxidation products in comparison with nicotine group (Table 2).

Our histopathological studies support our biochemical findings. The testicular alterations observed in atorvastatin and nicotine treated rats may be due to reduced testosterone levels since testosterone is needed for the normal morphology of testis. Aydos et al 23 have also observed morphological changes in the testis on nicotine administration. In agreement with our biochemical studies the testicular architecture of co administered group showed lesser toxicity in comparison with either nicotine or statin alone treated groups (Fig.6).

CONCLUSION: In conclusion co administration ameliorates the toxic effect induced by nicotine to some extent by up regulating the testosterone production and by reducing the oxidative stress. The drug-drug interaction is an interesting field of study. The interaction of nicotine and atorvastatin might have reduced the bioavailability of nicotine and thus reducing its toxicity. But only further studies can confirm it.

CONFLICT OF INTEREST STATEMENT: The authors declares that there is no conflict of interest.