COMMON METHODS TO SYNTHESIZE BENZOTHIAZOLE DERIVATIVES AND THEIR MEDICINAL SIGNIFICANCE: A REVIEW

COMMON METHODS TO SYNTHESIZE BENZOTHIAZOLE DERIVATIVES AND THEIR MEDICINAL SIGNIFICANCE:  A REVIEW

Recently, heterocyclic compounds analogues and their derivatives have attracted strong interest in medicinal chemistry due to their biological and pharmacological properties. The small and simple benzothiazole nucleus possesses numerous biological properties like - antitumor, antimicrobial, anti-inflammatory, anticonvulsant, and antidiabetic activities. These activities are also possessed by its substituted derivatives as well. The present review focuses on some commonly used easy procedures to synthesize the benzothiazole moiety and its derivatives, which comprise of different biological activities.

INTRODUCTION: The chemistry and biological study of heterocyclic compounds has been an interesting field for a long time in medicinal chemistry. A number of heterocyclic derivatives containing nitrogen and sulphur atom serve as a unique and versatile scaffolds for experimental drug design 1. Benzothiazole is one of the most important heterocycle that has received overwhelming response owing to its diversified molecular design and remarkable optical, liquid and electronic properties 2.

Benzothiazole consists of thiazole ring fused with benzene ring and possess multiple applications. In 1950s, a number of 2-aminobenzothiazoles were intensively studied as central muscle relaxants. Since then, biologist’s attention was drawn to this series when pharmacological profile of Riluzole (6-trifluoormethoxy-2-benzothiazolamines, Rilutek), as a Glutamate neurotransmission inhibitor was discovered. After that benzothiazole derivatives have been extensively studied and found to have diverse chemical reactivity and broad spectrum of activity 3-7.

Due to these biological activities, the synthesis of benzothiazole is a considerable area of current discussion. The classical method involves condensation of o-aminothiophenols with substituted aldehydes 8-14, acyl chlorides, carboxylic acids 15-16 or esters, nitriles 17. Other most commonly used methods include Pd/Cu/Mn/chloranil catalyzed cyclization of o-halothioformanilides 18-22. The survey of literature related to benzothiazoles reveals the presence of this bicyclic ring system in various amine or terrestrial natural compounds, which have useful biological properties 23. Benzothiazole derivatives possess a wide spectrum of biological applications such as antitumor 26-52, antimicrobial 54-83, schictosomicidal 84, anti-inflammatory 85-93, anticonvulsants 94-102, antidiabetic 103-108, antipsychotic 109 and diuretic 111 etc.

Given review is a brief account of some commonly used methods to synthesize benzothiazole derivatives and various structural alterations conducted on benzothiazole ring and preferential specificities imparted in their biological responses.

Some common routes to synthesis of substituted benzothiazole derivatives:

CONDENSATION OF o-AMINOTHIOPHENOL WITH ALDEHYDES

CONDENSATION OF o-AMINOTHIOPHENOL WITH ACIDS 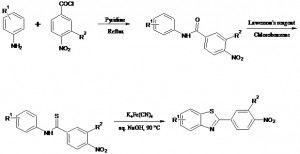 COUPLING BETWEEN THIOPHENOLS AND AROMATIC NITRILES

2-aryl substituted benzothiazoles can be synthesized using reaction of substituted anilines with nitrobenzoyl chloride in pyridine under reflux and further treatment with Lawesson’s reagent and then cyclization of intermediate using Potassium ferricyanide 25. 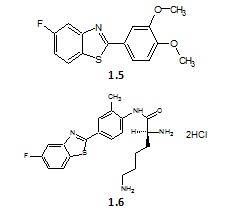 Maria Pelecanou et al., prepared a series of Rhenium (185/187Re) and Technetium-99m (99mTc) complexes of 2-(4’-aminophenyl) benzothiazole. The in-vitro evaluation of complexes 1.7 a & 1.7 b, 1.8 a & 1.8 b, and in-vivo application of the 99mTc complexes (1.7b) and (1.8b) in MCF-7a tumor bearing SCID mice established the potential of these labeled 2-(4’-aminophenyl) benzothiazole derivatives for radiopharmaceutical applications 31. 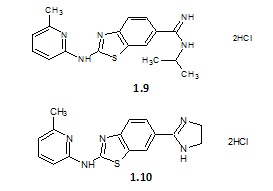 A series of 2-(4-acylaminophenyl) benzothiazoles (1.11) and polyhydroxylated 2-phenylbenzothiazoles (1.12) were screened for anticancer activity and found to be very active against  breast MCF-7 and MDA 468 cells 33, 34. 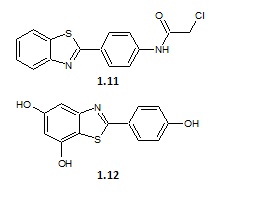 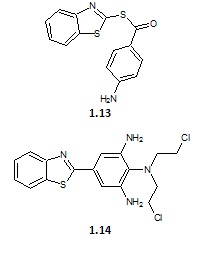 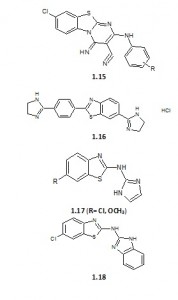 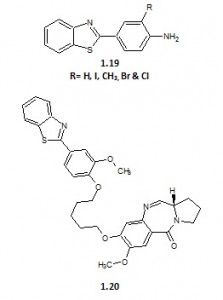 N-(benzothiazol-2-yl) derivatives of 2-benzylthio-4-chloro-5-R1-benzenesulfonamides were prepared and evaluated for activity and selectivity towards non-small cell lung cancer and melanoma cell lines. Compound (1.23) was found more potent due to high lipophilicity of CH3 group as compared to CN or CONH2 group 43. 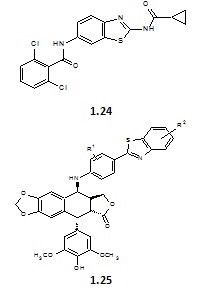 A number of N-bis-(triflouromethyl)-alkyl-N’-benzothiazolyl ureas were prepared and derivatives with an electron withdrawing substituent showed greater activity towards the tumor cell lines. The compounds (1.26) and (1.27) were found to have significant action on prostate, CNS, renal and leukaemial cancer cell lines 46.

A new series of benzothiazole substituted Quinol ethers and esters (1.31) were found to be active in-vitro against human colon and breast cancer cell lines 50.

A new series of 2-(4-aminophenyl) benzothiazole derivatives with a cyano or alkynyl group at 3’ position was prepared and evaluated for antitumor activity. The 5-flouro derivative (1.33) possessed in-vitro activity against MCF-7 and MDA-468 human cancer cell lines52. 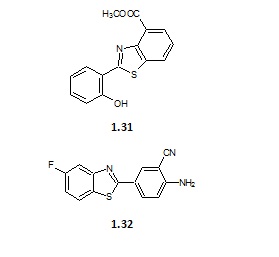 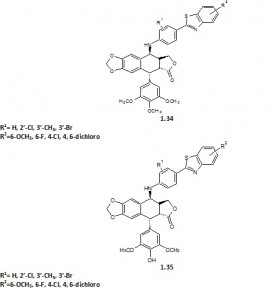 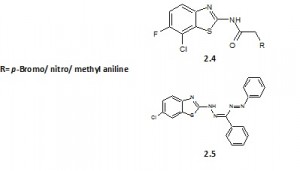 N-2-Benzothiazolylthiourea derivatives (2.10) and 2-styrylbenzothiazole-N-oxides (2.11)  had been screened and found to have good antimicrobial activities against Gram-positive and Gram-negative bacteria such as S. aureus, P. aeruginosa and E. coli and  a yeast (C. albicans) and a mould (Microsporum gypseum) 61, 62. 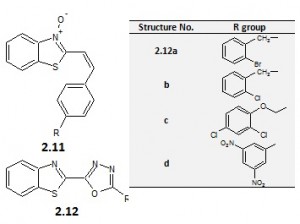 Some new 2-amino substituted benzothiazoles (2.16) were synthesized and evaluated for in-vitro antifungal activity against fungal strains such as C. albiacns, A. niger and A. flavus 65.

Alkyl derivatives of 3-methoxy benzamide substituted with heterocyclic systems were found to be potent anti-staphylococcal agents with a good to moderate inhibition of essential bacterial cell division protein FtsZ. Agents (2.17) and (2.18) were revealed as most active as antibacterial against S. aureus 66. Newer Schiff bases of benzothiazole derivatives (2.19) and thiazolidinones incorporated benzothiazoles (2.20 & 2.21) exhibited moderate antibacterial activity against Gram positive (S. aureus and S. pyrogenus), Gram negative bacteria (E. coli and P. aeruginosa) and Fungi (C. albicans, A. niger and A. clavatus). The results demonstrated that compounds with a 4-hydroxy, 4-dimethylamino and 3, 4-dimethoxy group on the aromatic ring showed good antibacterial activity 67, 68.

Antimicrobial evaluation of some thiourea derivatives (2.22), pyrazole, isoxazole and pyrimidine derivatives of benzothiazole was carried out and 7-amino-n-(benzothaizol-2-yl)- tetrazolo [1, 5-a]pyrimidine- 6-carboxamide (2.23) was found to be most potent against B. subtilis and B. thuringiensis (Gram positive), E. coli and P. aeruginosa (Gram negative) bacteria and Botrytis  fabae and Fusarium oxysporum fungal strains 69, 70.

Further thiazole, thiophene and pyrazole derivatives of benzothiazole were prepared and examined for antibacterial and antifungal. The test compounds (2.25) and (2.26) showed good potency towards S. aureus and S. pyrogenes that was equal to Chloramphenicol 72.

Antibacterial and antifungal activity of oxoazetidine derivatives (2.27) and nitrogen mustards of fluoro benzothiazoles was determined against S. aureus, B. subtilis, C. tropicans, A. niger and F. heterosporium. The nitrogen mustards (2.28), (2.29) showed excellent inhibition at a conc. of 50 µg/0.1ml 73, 74.

2-(4-substituted aryl-3-chloro-2-oxo-azetidine)-2-imino benzothiazoles (2.30) were prepared and evaluated for in-vitro antibacterial against B. subtilis, E. coli, S. aureus, K. pneumoniae and antifungal activity against A. niger, A. flavus, F. oxisporium and T. viride 75.

(b) Anti-tubercular activity: Some 4-Amino-N-(1,3-benzothiazol-2-yl) benzenesulphonamide derivatives were prepared and found to have good in-vitro Antimycobacterial activity (2.31) against H37Rv strain of mycobacterium tuberculosis and other derivatives (2.32) and (2.33) were also found active as antibacterial and antifungal agents 76.

Katz et al synthesized some derivatives of 2-hydrazinobenzothiazole (2.34) and evaluated them for anti-tuberculous activity 77.

(c) Antihelmentic activity: Some fluoro benzothiazole Schiff bases (2.36) and sulfonamido pyrazole derivatives of fluorobenzothiazoles (2.37) were prepared and examined for anthelmintic activity against earthworm Perituma posthuma. Some of the analogs showed significant activity 79, 80. 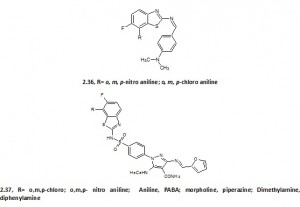 (d) Antiviral activity: HIV-1 protease inhibition was observed with novel Benzothiazolesulfonamides (2.38) and (2.39) with an IC50 value in 2-3nM range. The carbamate analogues were found to be better antiviral and inhibitors of HIV-1 Protease 81. 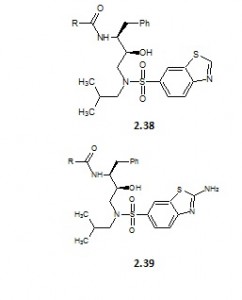 (e) Antimalarial activity: Antimalarial activity of 2-substituted-6- nitro and 6-amino benzothiazoles and their anthranilic acids were carried out on W2 and 3D7 strains of P. falciparum. The results revealed the potency of compounds (2.40) and (2.41) as the antimalarial agents of clinical and biological research 82. 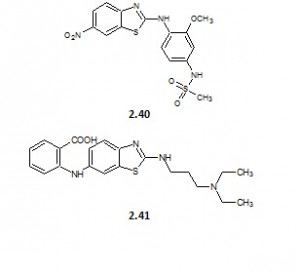 A series of benzothiazol-2-yl-dithiocarbamates (2.44) and their copper complexes was prepared and evaluated for their in-vitro Schistosomicidal activity against Schistosoma mansoni. The copper complexes showed an activity similar to Praziquantel with 100% worm mortality at 10 µg/ml 84.

A new series of 2-substituted benzothiazole derivatives was prepared by Shashank and co-workers. All synthesized compounds were evaluated for anti-inflammatory activity and (3.2) and (3.3) were found to be the most active among the series. The maximum activity may be due to presence of –F and –OCH3 groups. The same series of compounds also showed good anticancer activity 86. 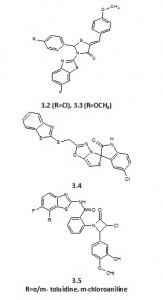 A series of 3-pyridylmethyl-substituted-2-amino-6-hydroxy benzothiazoles (3.7) and 7-chloro-6-flouro-N (substituted hydrazones)-benzothiazoles (3.8) was synthesized and tested for anti-inflammatory activity. Test compound (3.7) imparted a dual inhibitory action against leukotriene B4 and thromboxane A2, which was a result of direct action on 5-lipoxygenase and TXA2 synthetase 89, 90.

Synthesis of N-{6-fluoro-7-(substituted)-amino]-1, 3-benzothiazole-2-yl}-2/3/4-nitrobenzamides derivatives was carried out and screened for anti-inflammatory activity. The compounds (3.9), (3.10) were found to exhibit 70-78% inhibition in carrageenan induced paw oedema model in comparison to the standard Diclofenac (80%) 91.

2-Amino-heteroaryl-benzothiazole-6-anilides were discovered and evaluated for the anti-inflammatory activity. The 2-aminopyridyl analogue and 2-aminopyrimidinyl analogue (3.11) were identified as potent lck inhibitors with excellent cellular activities against T-cell proliferation 92.

Anti-inflammatory activity of O-substituted-4-benzothiazoles (3.12) was determined and most of the derivatives were found potent inhibitors of Bradykinin B2 receptor. The findings revealed that the 2-methyl group is an essential requirement for highly efficient antagonism of Bk B2 receptor 93. 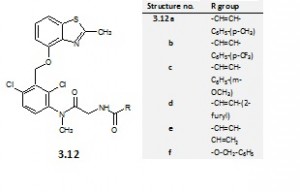 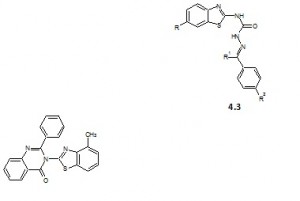 Anticonvulsant activity and toxicity studies of oxazetidin derivatives of benzothiazole (4.8) and isatin (indol-2, 3-dione) Schiff’s bases (4.9) was carried out by Siddqui et al. Both of the compounds were found to exhibit 100% protection against MES induced seizures 100, 101.

A series of 1, 3-benzothiazol-2-yl benzamides (4.10) was prepared by Siddiqui et al and carried out anticonvulsant, neurotoxicity and CNS depressant studies. Most of the compounds were found active in MES and PTZ screen with none of them neurotoxic or hepatotoxic. The compounds bearing the groups like F, CH3, OCH3 at the 6-position of benzothiazole ring with H, 2-Cl, 4-Cl substituted distant phenyl ring showed most excellent activity in MES and scPTZ tests 102. 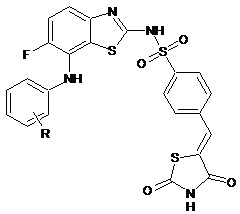 Zandt et al. prepared a novel series of conjugated indole-N-acetic acid with substituted benzothiazoles. All test compounds were evaluated for anti-diabetic activity and (5.2 a-l) were found most active compounds that inhibited aldose reductase with an IC50 of 5-12 nM and (5.2b) was most promising agent with IC50 5 nM 104.

A series of dipeptidyl peptidase inhibitors IV for the treatment of type 2 diabetes was synthesized and evaluated. The compound (3R)-3-amino-4- (2, 4, 5-trifluorophenyl)- N- {4- [6- (2- methoxyethoxy)-benzothiazol- 2- yl] tetrahydropyran- 4- yl}butanamide (5.3) was found to reduce the blood glucose level to a significant extent in an oral glucose tolerance test 105.

Anti-diabetic activity of novel N-(6-substituted-1, 3-benzothiazol-2-yl) benzenesulfonamides derivatives was determined on a NIDDM rat model. The compounds (5.4) and (5.5) were found to be potent inhibitor of 11β-hydroxy steroid dehydrogenase type-1 and showed 38-53% inhibition at 10µM concentration 106. 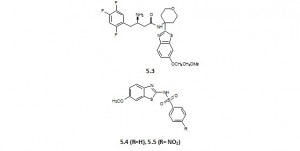 Further, Paoli and co-workers prepared a small library of 2-arylsulfonyl aminobenzothiazoles and screened them for protein tyrosine phosphatase 1B inhibition. The most active compounds (5.6), (5.7) were observed rapid reversible inhibitors of PTP-1B and significantly lowered plasma gluose concentration107.

The novel 2-(5-nitrothiazol-2-ylthio) benzo [d] thiazole derivatives were discovered and screened for their ability to inhibit c-Jun-N-terminal kinase. The compounds (5.8) and (5.9) demonstrated good in-vivo activity in a diabetic model of insulin resistance108.

The biological profiles of this new generation of benzothiazoles represent much progress with regard to older compounds.