ABSTRACT: Aim of this study was to develop a HPTLC fingerprint profiles of Tinospora cordifolia stems powdered by different procedures viz; Sample 1 (fresh aqueous powder), 2 (freeze drying powder), 3 (aqueous freeze drying powder) and Sample 4 (dry powder). The study also includes qualitative, quantitative secondary metabolites and the antioxidant potential of all the samples. Result of various physiochemical and phytochemical screening shows a variation among all powdered stems. HPTLC profile revealed a similarity between the samples 1, 2 and 3 while sample 4 shows much lesser no. of constituents. TLC profile of all the samples followed a similar trend like HPTLC fingerprinting. Besides this, secondary metabolite profiles viz; total phenolics, flavonoids, proanthocyanidin and anthocyanidin content of these samples reveals that maximum phenolics and flavanoids content in sample 1 (51.5 µg GAE/mg Wt) and 3 (14.0 µg QE/mg Wt). However, sample 4 was greatly enriched with maximum proanthocyanidin (27.7 µg CE/mg Wt) and anthocyanidin (175 µg CE/mg Wt) contents. Antioxidant potential of these powders was evaluated by total antioxidant, reducing power and DPPH assay which was maximum in sample 4 (170.8, 27.7 µg ascorbic acid/ mg Wt and 61.08 % respectively). A positive correlation between the sum of polyphenolic content and total antioxidant activity were also checked. Sample 4 shows a maximum amount of polyphenols (213.31 µg /mg Wt) and total antioxidants (170.8 µg ascorbic acid/mg Wt) than others. The presence of high levels of polyphenolic contents could be a possible reason behind the higher amount of total antioxidants.

Tinospora cordifolia (Menispermaceae) is an herbaceous vine which is indigenous to the tropical areas of India, Myanmar and Sri Lanka 7. It is also known as ‘Giloy’ in Hindi and ‘Guduchi’ in Sanskrit 8. The stem of T. cordifolia is succulent with long filiform fleshy aerial roots from the branches. The bark is creamy white to grey, deeply left rosette like lenticels 9. The large numbers of compounds have been isolated from the aerial parts and roots of T. cordifolia which includes berberin, tinosporaside, tinosporin, tinocordifolioside, cordifolioside A, cordifolioside B, isocolumbin, magnoflorine 10. It shows the presence of terpenoids, alkaloids, lignan, carbohydrates, bitters, steroids and glycosides.

One of the most important constituent present in stem of T. cordifolia is berberin, an isoqunoline alkaloid which is yellow in colour and shows various pharmacological actions which enhances the therapeutic efficacy of this plant 11. T. cordifolia a medicinal herb used in the Indian system of medicine due to their health benefits. In modern medicine it is used for the treatment of general weakness, fever, dyspepsia, dysentery, gonorrhoea, urinary diseases, viral hepatitis and anaemia 10. It is more recently used as immunomodulatory, antioxidant, antineoplastic, anti-stress, antihyperglycemic, antidiabetic agents. However, a systemic study to support the traditional applications of T. cordifolia could increase the uses of this plant in drug discovery 1.

Preliminary phytochemical screening was carried out on T. cordifolia stems four powders revealed the presence of a wide range of phytoconstituents including alkaloids, flavonoids, fixed oil, phenols and tannin, carbohydrates, glycosides and sterols.

Total fractions powdered extracts of four powdered extracts of T. cordifolia stems were obtained by preparative TLC (Thin layer chromatography) 12. Samples were loaded on TLC plate in the form a streak with the help of micropipette and dried with dryer. The TLC plates were developed in two solvent systems separately consists of Chloroform: Methanol (17:1 v/v) and Toluene: Ethyl acetate: Formic acid (5:4:1 v/v) respectively at room temperature. The plates were removed, dried by evaporation of solvent then sprayed with anisaldehyde. Different bands were visualized at light 366 nm were observed and their Rf values were calculated.

100 mg of powder from each powdered sample was weighed and dissolved in 5ml of methanol. The sample was subjected for sonication for 20 minutes and further be dissolved in 5ml. Samples are filtered and used for fingerprint analysis. Precoated aluminium sheet (10x10cm, Merck, Darmstadt, Germany) with silica gel 60 F254 of thickness 0.2 mm were used on sample which were applied in the form of band with the help of Linomat 3 applicator attached to HPTLC system which was programmed through winCATS, the software which were installed with the apparatus. 1ml of each of the sample was applied in the form of band of 3mm and chromatogram was developed in CAMAG twin through TLC chamber using solvent system Chloroform: Methanol: Ethyl acetate (9.5:0.5: 0.1 v/v) using by using anis- aldehyde sulfuric acid as a detecting agent. The developed Chromatograms were then scanned using CAMAG TLC Scanner 3 at 254 nm and 366 nm using slit dimension 4x0.30m12.

Secondary metabolites viz; total phenolics, flavonoids, proanthocynidins and anthocyanidin were measured as per the previously published procedures. For determination of total phenolics content Folin-Ciocalteu method was used 13. To the 0.5 ml of methanol extracts (concentration 1 mg/ml) of each sample 0.5 ml of the Folin-Ciocalteu reagent was added and content were mixed gently. After 2 min, 0.5 ml of sodium carbonate (100 mg/ml) was added by mixing gently and allowed to stand for 2 h. The optical density of the blue developed was measured at 765 nm. Total phenolic contents were expressed as Gallic acid equivalent (GAE) µg /mg weight (Wt.).

Flavonoids content was measured as per the method of Ganjewala et al. (2013) 14. Aliquots (500 μl) of each extract (concentration 1 mg/ml) were added to a test tube containing 1.25 ml of distilled water. To this, 75 μl of 5% sodium nitrate solution was added and left for 5 min. Then, 150 μl of 10% ammonium chloride was added. After 6 min, 500 μl of 1 M sodium hydroxide was added. The content was diluted with 275 μl of distilled water. Absorbance of the solution was measured at 510 nm. Total flavonoids content was expressed as Quercetin equivalent (QE) µg /mg Wt.

For determination of anthocyanidin content, 0.5 ml of extract (concentration 1 mg/ml) solution was incubated over night in 150 µ1 L of methanol acidified with 1 % HCl (v/v). Then added 100 µL of distilled water and anthocyanins were separated from chlorophylls with 250 µL of chloroform. The absorbance of the aqueous phase containing total anthocyanidin was recorded at 530 and 657 nm. Total anthocyanidin content were also expressed as milligrams of catechin equivalent (CE) µg /mg Wt of the tissue (13).

0.5 milliliter extract (concentration 1 mg/ml) from each sample was mixed with 3.3 ml of the reaction mixture which contain 3.3 ml of concentrated H2SO4, 0.335 g of sodium phosphate monobasic and 0.495 g of ammonium molybdate which was dissolved in 96.67 ml of water. The mixture was kept in water bath for one hour at 95º C. The solution containing 3 milliliter of reaction mixture and 1 milliliter of distilled water was then used as blank and the absorbance was measured using UV-Visible spectrophotometer at 695 nm. Experiment was performed in triplicates 16.

The DPPH Radical scavenging activity of powdered extract of T. cordifolia stems was determined by using standard protocols reported earlier. Two milliliter of each extract (concentration 1 mg/ml) was mixed with one milliliter of DPPH solution (0.2 mM/ml in methanol) and mixed thoroughly. The mixture was incubated in dark at 20ºC for 40 min. Absorbance was measured at 517 nm using a UV-Visible spectrophotometer with methanol as blank. Each experiment was performed in triplicates 17.

The percentage of DPPH radical scavenging was calculated according to the following formula:

AC is the absorbance of the control

At is the absorbance of test

The reducing power of four powdered extracts of T. codifolia stems were determined by ferric ion reducing power assay. One milliliter volume of each extract (concentration 1 mg/ml) was mixed with phosphate buffer of pH 6.6 and 2.5 ml of potassium ferric cyanide was added. The mixture was incubated at 50ºC for 20 min. A volume of 2.5 milliliter of trichloroacetic acid was added to the mixture and was centrifuged at 3000 rpm for 10 min in a cooling centrifuge. Then 2.5 milliliter of the supernatant was mixed with equal volume of distilled water and 0.5 ml of ferric chloride was added to the solution. Absorbance was measured at 700 nm using a UV-Visible spectrophotometer. Higher absorbance indicated greater reductive power. Each experiment was performed in triplicates18.

Preliminary phytochemical screening was carried out on the powdered extract of stems of          four different T. cordifolia samples revealed the presence of a wide range of phytoconstituents including alkaloids, flavonoids, tannins, protein, fixed oil, glycosides and carbohydrates as shown in Table 2.

Stems of T. cordifolia plants collected from PRF, Haridwar were analyzed by developing the TLC plates in two solvent systems Chloroform: Methanol (17:1 v/v) and Toluene: Ethyl acetate: Formic acid (5:4:1 v/v). To visualize the bands TLC plates were sprayed with anisaldehyde-sulphuric acid Vanillin and sample 1, 2 and 3 show maximum numbers of bands with similar Rf values in both solvent system. However, sample 4 shows lesser bands with differing Rf values than other extracts as shown in Table 3 and Table 4. The spot of Rf 0.58 was found to be Tinosporaside, one of the major constituents of the plant. 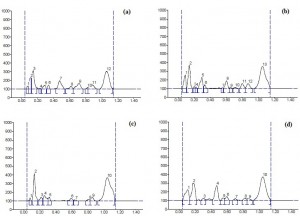 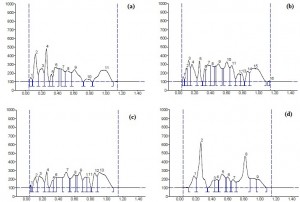 Total phenolics, flavonoids, proanthocyanidin and anthocyanidin contents in different powdered extracts are shown in Table 7. In these powders, total phenolics content were higher in sample 3 (51.5 µg GAE /mg Wt) while flavonoids and proanthocynaidins content were more or less similar in all the four samples of T. cordifolia stems. However, anthocynaidins contents were observed much higher in sample 4 with the value of 175 mg CE/mg Wt than other samples quantity (71, 141 and 93 µg CE / mg Wt respectively).

These all four differently processed stem powders were also checked for a correlation between total secondary metabolites and total antioxidant activity. A positive correlation was recorded in all the samples and sample 4 is enriched with maximum amount of total secondary metabolites (243.31 µg Std./mg Wt) as well as a highest total antioxidants (170.8 ascorbic acid equivalence µg) than all other samples of T. cordifolia stems as shown in Table 9.

DISCUSSION: In the current work attempts were made to generate fingerprint of differently processed T. cordifolia stems powder by useing of HPTLC which creates interest in prospective researcher from herbal science19. The developed HPTLC method and its outcome can be used as a quality control tool for rapid authentication of wide variety of herbal samples and or also for herbs which were differently processed. Previously also HPTLC-fingerprinting applications were demonstrated in quality control and assessment of herbal drugs 20. The described HPTLC result above in current work also marked nearly a similar number of constituents with their respective percentages of differently processed T. cordifolia stem powders. These results are also consistent with the previously published reports 10.

CONCLUSION: Differently processed T. cordifolia stems powders viz; 1, 2, 3 and 4 were tested for their physiochemical parameters, qualitative secondary metabolites, TLC profile, HPTLC profile before (at 254 nm) and after derivatization (366 nm). These giloy samples also were tested for quantitative secondary metabolites viz; total phenolics, flavonoids, proanthocyanidin, anthocyanidin content as well as for their antioxidant potentials (total antioxidant, reducing power and DPPH radial scavenging activity). Results shows the presence of different phyto-constituents in all the samples while HPTLC profile of different samples depicts a similarity between sample 1, 2 and 3 in reference to their constituents and area %. However, sample 4 (freeze drying powder) is different among all the provided samples in its HPTLC and TLC profile. During secondary metabolites (quantitative) and antioxidant assay shows a major and minor variations among all the samples. However, sample 4 is found to be a potent antioxidant which contains a higher amount of secondary metabolites.

CONFLICT OF INTERESTS: The authors declare that there is no conflict of interests regarding the publication of this paper.