INTRODUCTION: Vitex negundo (Verbenaceae), popularly known as Nirgundi, has been widely used since ages for its innumerable medicinal activities. It is found in Eastern Africa, Madagascar to Iran and throughout Asia. In India, it is found in outer Himalayan region around 1500 m height 1. The plant is a large aromatic shrub. The bark is thin, yellowish grey; leaves 3 - 5 foliolate, upper surface is green whereas the lower is silver in colour 2. The major class of phytoconstituents present in V. negundo include alkaloids, flavone glycosides, iridoid glycosides, essential oil (leaves) and other constituents like Vitamin C, carotene, benzoic acid, fatty acids, vanillic acid, leucoanthocyanins and triterpenoids 1, 3, 5, 6. Almost all parts of the plant are used for one or more activity but the leaves and roots are more commonly used for treating various ailments 7.

The plant has been used in oxidative stress, anxiety, inflammation, epilepsy, leucoderma and as antioxidant. Besides these, the leaves and roots have been used as bitter tonic, expectorant, diuretic and anodyne. Earlier report on the ethanolic extract of V. negundo roots showed significant anti-anxiety activity at dose of 100 and 200 mg/kg 8. The aim of the present study was to compare and evaluate antianxiety potential of leaves, stems and roots of V. negundo.

Procurement and Authentication of Plant Material: The leaves, stems and roots of V. negundo were collected separately from the Medicinal Plant Garden of the University Institute of Pharmaceutical Sciences (UIPS), Panjab University, Chandigarh, and were dried in shade.

Experimental Animals: Laca mice (either sex), housed at the Central Animal House, Panjab University, were allowed standard pellet diet (Ashirwad, Chandigarh) and water ad libitum. Groups of 6 mice (20 - 30 g) were used in all sets of experiments. The animals were fasted for 18 h before use. Approval (PU/IAEC/S/16/108) from the Institutional Animal Ethical Committee of Panjab University, Chandigarh was taken before carrying out biological studies.

Vehicle and Standard: Carboxy methyl cellulose (0.5% w/v aqueous) containing 5% tween 80 was used as vehicle for preparing the suspension of various test doses of different extracts as well as that of diazepam. Vehicle alone served as control.

Preparation of Doses: Test material were suspended in the vehicle in such concentrations as to administer  appropriate doses to mice in a volume ranging from 0.20 to 0.30 ml, p.o,  using a tuberculin syringe fitted with an oral canula.

Acute Oral Toxicity Studies: Acute toxicity studies for all the extracts were conducted as per OECD 423 guidelines. After 12 h of fasting, separate groups of mice were administrated single oral dose (500, 1000 and 2000 mg/kg) of the extract. Immediately after dosing, animals were observed for signs of toxicity during the first 0.5, 1, 2, 4, 8 and 12 h, and at every 24 h for 14 days. Behavioural parameters, tremors, lethargy, death, amount of water and feed taken were observed.

Elevated Plus-Maze Model of Anxiety: Anti-anxiety activity was evaluated using the modified elevated plus-maze (EPM) 8, 9. The apparatus comprising two open arms (16 × 5 cm) and two closed arms (16 × 5 × 12 cm), elevated to a height of 25 cm from the floor was used to evaluate antianxiety behaviour of mice. During the entire experiment, mice were allowed to socialize. Every precaution was taken to ensure that no external stimuli, other than the height of the plus-maze, could invoke anxiety in mice. The dose administration schedule was so adjusted that each mouse was having its turn on the elevated plus-maze apparatus 60 min after the administration of the test extract, diazepam or vehicle. Each mouse was placed at the center of EPM with its head facing towards the open arm. During the 5 min duration of the experiment, behavior of the mouse was recorded as (a) the number of entries in the open arm and (b) mean time spent by the mouse in each of the arms.

Statistical Analysis: The data have been expressed as mean ± standard error of mean (SEM). Significant differences among the groups were assessed using one way analysis of variance (ANOVA). The test was followed by Tukey’s multiple range test; p values less than 0.001 were considered as significant using GraphPad Prism 5.0.

Oral Acute Toxicity Studies: All the extracts of V. negundo neither exhibited signs of acute toxicity nor mortality upto the dose of 2000 mg/kg, p.o.

Antianxiety Activity: Different parts of V. negundo used in the present investigation were collected from an authentic source, i.e. medicinal plant garden of the UIPS, Panjab University, Chandigrah. Anti-anxiety activity was evaluated using elevated plus maze model. The model is considered to be an etiologically sound animal model of anxiety because it uses natural stimuli (fear of a novel open space and fear of balancing on a relatively narrow, raised platform) that can induce anxiety 9, 10, 11. Administration of diazepam (2 mg/kg) significantly increased the number of the entries and the time spent in the open arms compared to the control group Fig. 1 - 3. In the present study, oral administration of leaves, stems and roots extracts of V. negundo induced anxiolytic like effects in mice. Amongst the leaves, roots and stem extracts, maximum anti-anxiety activity was exhibited by the chloroform and ethanol extract of the roots at dose of 400 mg/kg and 100 mg/kg respectively Fig. 3. Although, chloroform extract of leaves and the water extract of stems of showed slight behavioural change but the effect was not as significant as of the root extracts Fig. 2 and 3. 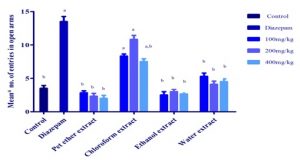 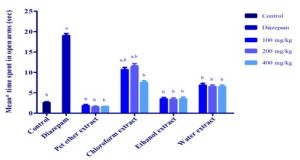 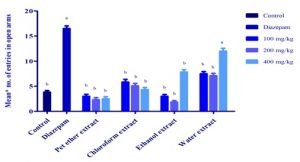 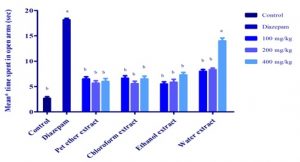 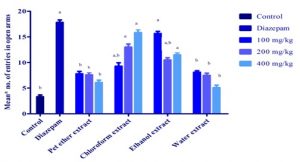 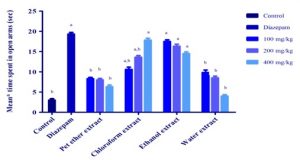 CONCLUSION: Results of present study indicate that the roots of V. negundo have maximum anti-anxiety potential, compared to the leaves and stems these observation validate the earlier report on the plant. Further studies are in progress to isolate the active constituent(s) responsible for the anti-anxiety activity.

ACKNOWLEDGEMENT: The authors are thankful to University Grants Commission, New Delhi for financial help to carry out this study.

A. Sharma, Gulsheen, A. Kumar* and A. Sharma