ABSTRACT: Euphorbia neriifolia and Euphorbia hirta have been traditionally used for relieving anxiety and other nervous disorders. The present study was designed to evaluate and compare the antianxiety activity of E. nerrifolia leaves and E. hirta aerial parts using elevated plus maze model. Petroleum ether (60-80°C), chloroform, ethanol and aqueous extracts of both the plants were prepared and evaluated for antianxiety activity. Chloroform extract of E. neriifolia and ethanol extract of E. hirta showed significant antianxiety activity at the dose of 200 and 400 mg/kg, respectively, comparable to that of diazepam (2 mg/kg). The study was extended to develop the TLC fingerprint profile of the two plants using CAMAG HPTLC system, and the relative percentage of the separated constituents was calculated from the area of peaks. Further, phytochemical screening of the bioactive chloroform extract of E. neriifolia showed the presence of flavonoids, steroids/terpenoids, phenols, and tannins while the bioactive ethanol extract of E. hirta tested positive for flavonoids and steroids/terpenoids.

INTRODUCTION: Anxiety disorders are one of the most prevalent and impairing psychiatric problems and ranked as the sixth largest contributor to non-fatal health loss globally 1. Evolutionarily, anxiety is considered to be the normal behavioral repertoire and adaptive response to stress to deal with potential risks. However, when anxiety increases beyond a certain level, interfering with everyday functioning, it is considered to be pathological 2. Pharmacological treatment of anxiety includes different drugs like barbiturates, benzodiazepines, and serotonin reuptake inhibitors but their use is limited because of unwanted side effects such as psychological and physical dependence, impaired cognition and coordination, withdrawal reactions and suicidal ideation 3.

Plants have been used traditionally for their ameliorative effect in anxiety since the ancient times as they are equally efficacious as conventional drugs with the added advantage of having fewer side effects 4. E. neriifolia (Euphorbiaceae), commonly known as Thohar (Hindi) and Common milk hedge (English), is found throughout the Deccan peninsula of India and around North and Central India. It is a large succulent shrub with stipular thorns, growing up to 4.5 m. Leaves are succulent, deciduous, 6-12 inches long and ovular in shape with reticulate venation 5, 6, 7.

The plant has been extensively used in Ayurveda as an aphrodisiac, rubefacient, anticancer agent and to heal anal fistula. Besides this, it is also used in Unani medicine as a respiratory stimulant, local anesthetic, antibacterial, antiviral, and paronychia. E. neriifolia leaves have been claimed to possess aphrodisiac, expectorant, wound healing, diuretic, immunomodulatory, antianxiety and CNS depressant properties 8, 9. E. hirta (Euphorbiaceae), commonly called Dhudhi (Hindi) or Asthma weed (English) is a small annual herb, frequently seen along roadsides, grasslands and pathways. It is usually erect, grows up to a height of 40 cm and can also be seen lying down. The plant has been used widely in the traditional system for treating bowel complaints, worm infestations, and kidney stones. The whole plant has also been reported to possess anti-bacterial, antiamoebic, antifungal, antiviral, spasmolytic, antidiarrheal, sedative, anxiolytic, analgesic, antipyretic, anti-inflammatory, anti-malarial and antihypertensive properties 10, 11. Despite the widespread use of E. neriifolia and E. hirta as a traditional medicine for treating various ailments, including anxiety, no exhaustive reports to substantiate their therapeutic claims are available. Thus, the objective of the present study was to evaluate and compare the antianxiety activity of various extracts viz. petroleum ether, chloroform, ethanol and water extracts of E. neriifolia leaves and E. hirta aerial parts

Plant Material: The leaves of E. neriifolia and aerial parts of E. hirta were collected from the Medicinal Plant Garden of University Institute of Pharmaceutical Sciences (UIPS), Panjab University, Chandigarh. These were air-dried in the shade. Morphologic and microscopic characters of the collected samples were found to match completely with those reported in the literature 7, 12. Voucher specimens of E. neriifolia leaves (Lf/1502) and E. hirta aerial parts (Wp/1501) have been deposited in Herbarium-cum-Museum of UIPS, Panjab University, Chandigarh.

Experimental Animals: Laca mice (either sex), housed at the Central Animal House, Panjab University, were allowed standard pellet diet (Ashirwad, Chandigarh) and water ad libitum. Groups of 6 mice (20-30 g) were used in all sets of experiments. The animals fasted for 18 h before use. Approval (PU/IAEC/S/16/112) from the Institutional Animal Ethical Committee of Panjab University, Chandigarh was taken before carrying out biological studies.

Preparation of Doses: Polysorbate 80 (5%) in aqueous carboxymethylcellulose (CMC 0.5% w/w) was used as a vehicle for preparing the suspension of extracts/standard drug. Doses of various test substances were prepared by suspending appropriate quantities in the vehicle for administering these to mice in volumes ranging between 0.20-0.30 ml per oral route.

Acute Toxicity Studies of the Extracts: Acute toxicity studies of pet ether, chloroform, ethanol and water extracts of E. neriifolia and E. hirta were carried out on mice as per OECD 423 guidelines 13. After 12 h of fasting, different groups of mice were administered single oral dose (500, 1000 or 2000 mg/kg) of the four extracts. Immediately after dosing, animals were observed for signs of toxicity during the first 0.5, 1, 2, 4, 8 and 12 h, and at every 24 h for 14 days. Behavioral parameters, tremors, lethargy, death, amount of water and feed taken were observed.

Anti-anxiety Activity: Anti-anxiety activity was evaluated using elevated plus maze (EPM) model 14, 15. The apparatus consisted of two open arms (16 × 5 cm) and two closed arms (16 × 5 × 12 cm) having an open roof. It was kept elevated (25 cm) from the floor for evaluating the anxiolytic behavior. Doses were administered orally using tuberculin syringe fitted with an oral cannula. The dose administration schedule was so adjusted that each mouse was having its turn on the EPM 60 min after the administration of the vehicle, diazepam (2mg/kg) or the test extracts (100, 200 or 400 mg/kg). Each mouse was placed at the center of EPM with its head facing towards the open arm. During 5 min duration of the experiment, behavior of the mouse was recorded as (a) the number of entries into the open arms and (b) mean time spent by the mouse in open arms.

a) Preparation of Extracts: neriifolia leaves, and E. hirta aerial parts (2 g each in filter paper sachets) were separately macerated (30 min) and refluxed (30 min) with methanol. The extracts were concentrated, transferred to 5 ml volumetric flasks, and the volume was made up to the mark. These were used to prepare the fingerprint profiles.

The developed plates were visualized after spraying with an anisaldehyde-sulphuric acid reagent. The chromatograms obtained were scanned at 540 nm. The relative percentage of the separated constituents was calculated from the area of peaks.

Phytochemical Screening: The bioactive chloroform extract of E. neriifolia and ethanol extract of E. hirta were screened for different classes of phytoconstituents using the standard procedures 16.

Yield of the Extracts: Percentage yield of extracts is listed in Table 1.

Acute Toxicity Studies: All the extracts neither exhibited signs of acute toxicity nor mortality up to the dose of 2000 mg/kg, p.o.

*Calculated based on area under curve

*Calculated based on area under the curve 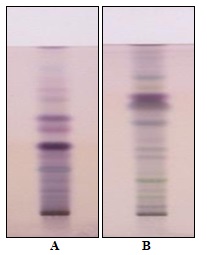 DISCUSSION: Despite the traditional use of E. neriifolia and E. hirta for treating nervous disorders, systematic scientific reports on the evaluation of its anti-anxiety effects are not available. Elevated plus maze model is considered to be etiologically similar to the anxiety observed clinically in human beings 15. An anxiolytic agent increases both the frequency of entries and the time spent in open arms of the EPM and is thought to act via the GABA-A (γ-aminobutyric acid type A) receptor complex, justifying the use of diazepam as a positive control in the study 14. Anti-anxiety agents are expected to increase the motor activity, which is measured by some entries and time spent by the animal in the open arm.

Results of the present study indicate that among all the extracts, the chloroform extract of E. neriifolia and ethanol extract of E. hirta showed a significant dose-dependent anti-anxiety activity at 200 mg/kg and 400 mg/kg, respectively which was statistically comparable to diazepam. Besides this, a dose-dependent decrease in the activity was observed, which might be due to mild sedation at higher doses. The fingerprint profile of both the plants was developed because it is one of the most basic, reliable and important parameters for herbal drug standardization. The optimum resolution was obtained using toluene: ethyl acetate: formic acid (9.5:0.5:0.1) for E. neriifolia and toluene: ethyl acetate: formic acid (8:2.5:0.1) for E. hirta on precoated silica plate after spraying with 0.5% anisaldehyde. Relative % content of each constituent separated was calculated based on AUC.

Phytochemical investigation of both extracts showed the common presence of flavonoids, steroids, and terpenoids indicating that these might be responsible for their anti-anxiety effect. Also, previous biochemical and pharmacological reports have shown that flavonoids have significant effects on the CNS 17, primarily due to their affinity for the central benzodiazepine receptors 18. Thus, the anti-anxiety activity of the two extracts might be due to the flavonoids present in them.

CONCLUSION: Results of the present study indicate that the chloroform extract of the E. neriifolia leaves and E. hirta aerial parts have significant anti-anxiety activity at a dose of 200 and 400 mg/kg, respectively. Further, studies are underway to isolate the active constituent(s), elucidate their structure, and establish the mechanism of anti-anxiety activity.

ACKNOWLEDGEMENT: The authors are thankful to Council of Scientific and Industrial Research, New Delhi for financial help to carry out this study.

Gulsheen, A. Kumar * and A. Sharma