INTRODUCTION: Type 2 diabetes mellitus (T2DM) and depression aremajor public health issues. Worldwide, more than 365million people are estimated to have T2DM, and almost 300 million people have major depression. Both these disorders are projected to be among the five leading causes of disease burden by 2030 1.

They target individuals in their most productive years and often result in premature death and significant disability. Depression is approximately twice more prevalent in adults with T2DM than in those without diabetes 2, 3. Patients with T2DM who are depressed have impaired glycaemic control, increased rates of mortality, diabetes related complications and hospitalizations, higher health-care expenditure, poorer diabetes self-care and lower quality of life(QoL)4-8.

Despite being screened, antidepressant treatment is not much effective because diabetes also weakens its effectiveness. Also, comorbid diabetics with depression are more likely to have problems and concerns with medication, such like fear of side effects and addiction, than those patients without depression. Most importantly, the medications used to treat depression itself may increase the risk of diabetes in people with depression, due to side effects such as sedation, increased appetite, and weight gain, or via unknown mechanisms.

Current research suggests a bi-directional relationship between type 2 diabetes mellitus (T2DM) & depression & the two disorders may share similar pathophysiological mechanisms 9. Depression was associated with a 60% increase of type 2 diabetes while type 2 diabetes was only associated with a moderate (15%) risk of depression10. On one side, depression could facilitate the onset of diabetes through disturbances in eating behaviors, increase in potentially damaging behaviors (smoking and alcohol consumption), drug induced weight gain, decreased self-care activities or activation of stress-related hormonal pathways (stimulation of the hypothalamic–pituitary–adrenal (HPA) axis, resulting in increased cortisol levels and a resulting increase in blood glucose, eventually progressing to diabetes) and pro-inflammatory cytokines which interfere with glucose metabolism 11.

On the other hand, limitations on diet and physical and social activities determined by diabetes, together with some diabetes-related symptoms (e.g., fatigue induced by hyperglycemia), could induce depressed mood12.

The available data regarding the prevalence of depression in type 2 diabetes mellitus patients in India is scarce. Therefore recognition of depression becomes important as cost-effective treatment is available resulting in improvement of diabetic care as well. In addition, few studies have evaluated the impact of specific antidepressant therapies on glycemic control in people with diabetes and fewer still have examined the incidence of new-onset diabetes among those treated for depression.

The aim of the present study was to compare the effects of Escitalopram and Agomelatine on glycemic control and symptoms of depression in patients with T2DM and depression.

Study was started after obtaining ethical approval from the Institutional Ethics Committee. Written informed consent was obtained before the enrollment of the subjects in the trial. Study is registered in Clinical Trial Registry of India (REF/2014/09/007582). We conducted a randomized, open label, parallel groups study on 40 subjects with comorbid T2DM and depression. Following were inclusion & exclusion criteria:- 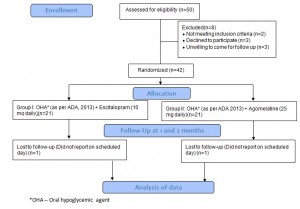 Data was analyzed using Microsoft Excel 2013 and SPSS (Statistical Package for Social Sciences) version 21.0. Independent sample t-test was used for comparison of baseline parameters and parametric data (FBG, PPBG and HbA1C) at end of 1 and 2 months. Non-parametric data (HDRS score and MADRS score at end of 1 and 2 months) was evaluated using Independent samples Mann Whitney U test. P value < 0.05 was considered significant and P value < 0.001 was considered highly significant. The power of the study is 88.5%.

TABLE 1: BASELINE PARAMETERS OF SUBJECTS BEFORE START OF STUDY 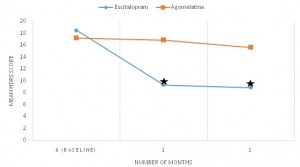 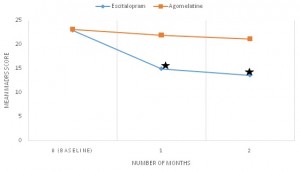 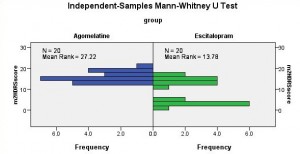 FIG. 3: COMPARISON OF MEAN HDRS SCORES AT THE END OF 2 MONTHS IN AGOMELATINE AND ESCITALOPRAM GROUP 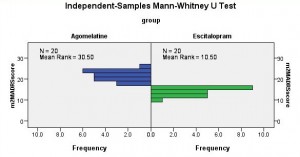 FIG. 4: COMPARISON OF MEAN MADRS SCORES AT THE END OF 2 MONTHS IN AGOMELATINE AND ESCITALOPRAM GROUP

DISCUSSION: The main finding of the present study was that Escitaloprammay be a promising agent in the treatment of comorbid T2DM and depression. To the best of our knowledge, this is the first study to investigate simultaneously the metabolic and mood effects of Agomelatine and Escitalopram in depressed patients with T2DM.

There are relatively few controlled studies investigating the efficacy of antidepressant treatment in T2DM patients, and these almost exclusively pertain to the use of SSRIs (Selective Serotonin Reuptake Inhibitors) 13. SSRIs, and other novel antidepressants as well, are better tolerated and safer for use in diabetic patients with depression because they have less anticholinergic and antiadrenergic side effects, and lack quinidine-like action. A recent meta-analysis of 11 randomised controlled studies showed the efficacy of antidepressant treatment, the combination of pharmacotherapy and psychotherapy being favourable both for depression and diabetes related parameters 13.

A study done by Gehlawat et al. in 201314 demonstrated a significant decline in mean HDRS scores which was observed 3 weeks onwards till the end of the study during Escitalopram therapy. Also, there was a corresponding decline in mean fasting and post-prandial plasma glucose level at 6 and 12 weeks respectively and glycosylated hemoglobin level at 12 weeks was observed. In another study, Dhavale et al. in 201315 showed that 47% of patients started on Escitalopram showed a reduction in the blood sugar levels from their baseline values which was nclinically and statistically significant. Karaiskos et al. had done a similar study opting for Agomelatine and Sertraline in 201316and it was shown that HDRS scores had decreased compared to baseline, fasting blood glucose levels were similar and glycosylated haemoglobin levels in Agomelatinegroup had decreased significantly when compared to Sertraline group.

The proposed mechanism of action by which Escitalopram lowers fasting and glycosylated haemoglobin can be attributed to the fact that Escitalopram is the most selective SSRI which increases the level of serotonin in synaptic cleft. Serotonin inhibited glucose-induced hyperglycemia and enhanced the increase inserum insulin levels elicited by glucose17.

On the other hand, Agomelatine is in a unique pharmacological class. Unlike other available antidepressants, agomelatine is a melatonin agonist (i.e., MT1 and MT2 receptor-siteagonism) and a 5HT2C antagonist18. Themelatonergic effect resynchronizes circadian rhythms and 5HT2C antagonism increases the release of norepinephrine and dopamine.

CONCLUSION: From the above findings, it can be inferred that Escitalopram seems to be a better alternative than Agomelatine in terms of glycemic control and control of symptoms of depression when being prescribed to patients suffering from T2DM and depression.

ACKNOWLEDGEMENT: I would like to thank organizers of national conference entitled ‘Novel Tools and Treatment Approaches in Health Care System’ for selecting my paper for oral presentation, organized at Faculty of Pharmacy, Integral University, Lucknow on 3rd March 2015.