ABSTRACT: Direct Compression is becoming a preferred manufacturing process in order to speed up the manufacturing and reduce costs. Although a major requirement for direct compression process is selection of excipients with the optimum physical characteristics that increase final flowability and compressibility of the ready for compression (RFC) tableting blend. By using combinations of excipients and novel processing techniques, particles / excipients can be engineered to deliver desired properties to be used in direct compression. The resulting engineered excipients are commonly known as “coprocessed,” “high functionality,” “multifunctional,” “high functionality,” “performance” excipients. Prosolv Easytab SP and Panexcea™ MHC 300G are amongst this type of high-functionality excipients, which are used in present study to check their comparative performance on compression of tablets using direct compression technique with use of BCS class– II drugs such as Vardenafil HCl (5 mg). The drug was characterized using Infra-red spectroscopy. Pre-formulation, solubility and drug-excipient compatibility studies were carried for drug substance. While for all individual batches, blend analysis and various IPQC parameters such as tablet hardness, friability, disintegration, weight variation and uniformity of thickness were analysed. In-vitro release for the drug was also studied, the results from tablets of both batches using different high-functionality excipients were optimum and satisfactory and use of such high-functionality excipient is favourable in order to enhance efficiency with reduction in both time and cost of process.

INTRODUCTION: In order to increase acceptability of direct compression method for tablet punching, innovative excipients with improved compressibility and flow, which can include API variability, are required. Enhancing certain functionality of an existing excipient by using novel processing methods, or combining it with other commonly used excipients, are amongst the most cost effective manner.

A new class of ready-to-use lubricant-coated high functionality excipient, “Prosolv Easytab SP” has been launched in the market, which can be used in one-step blending with API before compression without the need of using any other auxiliary agent2. The aim of the article is about development of an immediate release oral unit dosage form foranalysing the comparative effect of the “ProsolvEasytab SP” and “Panexcea MHC 300G” used independently. The effect to be analysed is the release pattern and other formulation as well as ‘in process quality control’ parameters. The drugs used for the article is Vardenafil HCl. Vardenafil inhibits cGMP-metabolizing phosphodiesterases and is used for treatment of cardiovascular and cerebrovascular disorders and/or disorders of the urogenital system3. Present article deals with providing the account of effect of such all-in-one composite for better selection guide to the preparation of the directly compressible oral solid dosage forms.

Direct compression was the chosen method for preparation of tablets, since the excipient composites are designed for such procedure and contains all the necessary content for the same

All materials were weighed accurately using Shimadzu weighing balance. Both, the drugs and all excipient composites were individually shifted through 40# mesh separately. Respective drugs with the respective excipients (in the predetermined ratio and according to formula) were blended for 2 min. Tablets were compressed using “B”-tooling single rotatory 12 station tablet compression machine and 6 mm sized, flat punches set. Prepared tablets were evaluated for required IPQC parameters, such as tablet hardness, uniformity of thickness, friability, disintegration and average weight of tablets. In-vitro release of API from the drug was also analysed. Reproducibility of the trials using same formula was also checked. The formulae for the preparation of Vardenafil HCl tablets with different excipient composites are as given in Table 1.

Bulk density (BD): Bulk density was determined by measuring the known mass of powder sample that has been passed through a screen into a graduated cylinder and as method suggested in USP-32 4. Bulk density is calculated by following given formula:

The cylinder containing measured sample mass was tapped mechanically by raising the cylinder and allowing it to drop its own weight using a suitable mechanical tapped density tester that provides a fixed drop of 14 ± 2 mm at nominal rate of 300 drops per minute. The tapped bulk density is calculated in gm/ml by the following formula: 5

Hausner’s ratio may also be calculated as

The friability (F) is given by the equation:

Where, W0is the weight of the tablets before the test,

W is the weight of the dedusted tablet after the test.

The in-vitro dissolution tests were performed using USP apparatus ІІ (Paddle method). Total no. of tablets used for each test were six (6) units. The Dissolution medium for Vardenafil HCl it was 900 ml of 0.1 N HCl as mentioned in monograph as well as in dissolution method given by Office of Generic Drugs (OGD). The Paddle rotation speed was kept at 50 rpm for both methods. In all experiments, an aliquot of 10 ml dissolution samples was withdrawn at predetermined time intervals, and replaced with an equal volume of the fresh medium to maintain total volume constant (sink condition). Samples were filtered through filter paper and analysed by UV spectrophotometer 245 nm for Vardenafil HCl. Cumulative fractions of drug released from the tablets were calculated and plotted as function of time.

Related substances analysis can be used as the simplest method to predict any physiochemical interaction between the components in a formulation and can therefore be applied for selection of suitable chemically compatible excipients.Following combinations of Drug and Excipient were kept at under stress condition for compatibility studies. 40°C/75% RH (open) for 1 month and Drug-Excipient compatibility for drugs & excipients mixture were tested using IR spectroscopy studies.

In Table 3 observations for drug-excipient compatibility studies after 1 month are shown. The table also gives inference whether drug is compatible with excipient.

Results of Blend Evaluation Parameters for Trials F001 to F002:

For trials F001 to F002 results of blend evaluation studies are shown in Tables 4.

IPQC parameters & Assay studies: In process quality control parameters were tested for all four trial batches F001 to F002 and results for same trials are given in Table 5.

In-vitro drug release from tablets of batches F001 to F002 has been shown in Table 6, followed by the graphical representation of same in Figure 1. 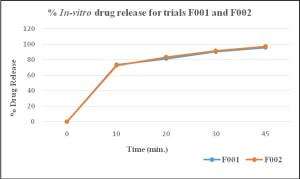 rapid. It ensured savings of time as well as reduction of process steps and efforts. Reduced process steps also reduced the chances of contamination or quality related issues. The compressed tablet contains optimized physical characteristics such as hardness, friability, disintegration etc. and it also showed good dissolution parameters in-vitro. Hence, it can be concluded that the directly compressible high functionality excipients must be preferred for generic manufacturing of drugs. It can reduce the cost of overall manufacturing, can improve quality, speeds up the process and in final turn can reduce the overall price of tablet in market.