ABSTRACT: Aims: To evaluate and analyze effectiveness of animal simulation based teaching in pharmacology in comparison to conventional methods to undergraduate medical students. Methods: An interventional and comparative study was conducted among second professional MBBS students. All students were divided into two groups A and B. Four demonstrations of experimental pharmacology were demonstrated by conventional method and animal simulation method by same teacher. Both groups were equally exposed to both modes of demonstrations. Every demonstration was followed by an assessment containing thirty objective type questions. Feedback was taken to analyze generalized opinion about the programme on likert’s scale. The data was analyzed by using Fisher’s exact test and p value calculated. Results: Percentage of students who scored 60% or more was higher in simulator based teaching in assessment related to procedure, related pharmacology and applied pharmacology. The difference between total scores of both groups in all four demonstrations was statistically significant with p value < 0.05. In feedback, percentage of students who opted three or more on likert scale was higher for simulator based teaching. 83% students preferred simulator based mode of teaching in future, while only 63.8% preferred to perform practical on it. The difference was statistically significant with p value 0.0047.   Conclusion: The study recommends use of animal simulation for teaching experimental pharmacology, as it is found to be effective, interesting and feasible without sacrificing and providing pain to animals as compared to conventional method. Study also points out need of computer training for the faculty and students.

INTRODUCTION: Pharmacology is the science of drugs. It involves understanding the interaction of exogenously for administered chemicals with living systems including interactions between drug molecules and receptors. Animal experiments were an integral part of pharmacology teaching to undergraduate students.

The main purpose of animal experiments was to develop skills for performing in-vivo and in-vitro experiments and to correlate the findings with theoretical concepts explained in lectures and textbooks.

However use of animals for teaching and learning of pharmacology has shown a downward trend over the last decade due to ethical concerns, practical problems associated with the animal experiments such as availability of animals, cost of purchasing animals and maintaining animal houses. 1, 2 Due to serious ethical concerns related to use of animals for experiments, the University Grant Commission (UGC) has decided to stop the animal experimentation for undergraduate students. 3

Though studies related to use of Animal Simulators and Computer associated learning in undergraduate training are available 8, 10 but none of them has compared the effectiveness of animal simulation and CAL with conventional teaching method currently followed in majority of medical colleges of country. Thus this study was planned to evaluate and analyze effectiveness of animal simulation based teaching in pharmacology in comparison to conventional methods to undergraduate medical students.

Methodology: A prospective interventional and comparative study was conducted among second professional MBBS students. Prior permission was taken from Institutional Ethics Committee and Head of the department. All students in Second professional were included in the study, and divided into group A and B. Group A included students with odd roll numbers and group B with all even roll numbers. Four demonstrations of experimental pharmacology were selected.

Every demonstration was followed by an assessment sheet containing thirty objective type questions, which was validated by faculty of the department. The Questions were divided into four categories. Ten questions were from procedure, ten from related pharmacology, five from the applied part and five questions for research orientation. Each question carried one mark.

After conducting all four demonstrations, feedback was taken by the students to analyze generalized opinion about the programme. The feedback was taken on clarity of objectives, interesting or not, explanation of procedure, research orientation, retaining capacity and correlation with theory knowledge, each on likert’s scale. Last two questions were related to their preference of mode of conducting demonstration and experimentation in future.

Percentage of students who scored 60% or more than 60% in different categories of assessment after demonstration is mentioned in Table 1.

TABLE 1: PERCENTAGE OF STUDENTS SCORING ≥60% WHEN DEMONSTRATION WAS TAKEN BY CONVENTIONAL METHOD AND ANIMAL SIMULATION METHOD

Percentage of students who scored 60% or more than 60% was higher in simulator based teaching for first three categories i.e. procedure, related pharmacology and applied pharmacology. There was no significant difference in scores of students in category of research orientation between both groups.

The difference between total scores of both groups in all four demonstrations was statistically significant with p value < 0.05. The difference in cumulative scores was also statistically significant. (Table 1) Feed back of students- Percentage of students who opted three or more than three on likert scale was higher for simulator based teaching (Fig. 1). 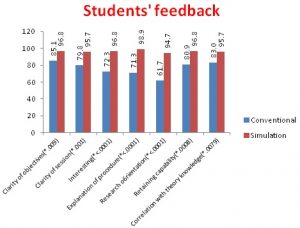 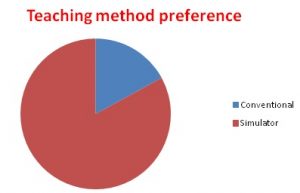 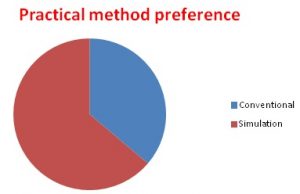 DISCUSSION: Guidelines of Ministry Of Social Justice Empowerment for the conduct of experiments on animals prohibit the use of animals for demonstrations and repetition of experiments just for obtaining skills.11 MCI has recommended computer assisted learning (CAL) for practical teaching of Pharmacology and Physiology for undergraduate students. For post-graduation and research work for new molecule at institution level, permission from institutional animal ethics committee which must include one nominee from the Committee for the Purpose of Control and Supervision of Experiments on Animals (CPCSEA), is mandatory. 12

As most of medical graduate opt clinical practice as their profession, very few opt pre and para clinical branches and very few percentage from them join the research oriented carrier. Sacrificing and troubling animals to teach experimental pharmacology for observation of well established effects of drugs is against animal protection and also it is an extra financial burden to the institution. 9 On the other hand simulation based teaching has advantages of providing accurate and consistent results. In animal experiments, so many factors related to animals or experimental assembly may alter the result which is not the problem in simulator based teaching. The animal experiments also need trained faculty as well as assistant staff, which is not required in simulator based teaching.  With simulator based learning, many students can observe the effect at a time and can repeat it to revise. Simulator based teaching also has advantage of promoting self learning, as students are capable to follow steps easily without help of any trained assistants, and the most important is that reduction, replacement and refinement of animal experiments can be achieved.13

After the ban on use of animal experimentation for undergraduate teaching, in majority of colleges experimental pharmacology is taught by prepared charts, graphs, tracings etc (conventional teaching). With no real animal experiment being done, most of the practical aspect is left to the imagination of the students. In our study animal simulator based teaching was compared with conventional teaching on the basis of scores achieved by the students and feedback of the students. We divided the scores in four headings for detail evaluation of effectiveness of both teaching methods.

We opted to compare percentage of students who scored minimum of 60% or more, as total score may be affected by number of excellent or weak students in individual batch who may score minimum or maximum and provide false representation of teaching methods. Our study supports simulator based teaching as the scores of students were better and statistically significant in the animal simulator group as compared to the conventional teaching group.

Studies on simulator based teaching are available but majority have only taken feedback from students and faculty. One study by Badyal et al compared total scores and its results are similar to our study. 4 Our results reflected better performance of students in understanding procedure, related pharmacology of drugs and applied part of drugs, but the difference in scores related to research methodology were not significant. This may be due to lack of their knowledge regarding research methodology and students in both the group attempted the questions by guess only.

There was one contradictory statement in the feedback, students reported that simulator based teaching provide better research orientation(94.7%) than conventional teaching(61.7%), but this statement does not match with their scores, probably because of their inappropriate knowledge regarding fundamentals of health research.

It was found that the simulator based teaching was time consuming to explain the procedure, effect of drugs and entering data in the tables. There were few areas where improvement is required in the simulators. Examination mode also needs some additions and more variety of exercises.

CONCLUSION: Learning objective of experimental pharmacology for undergraduate students is to learn well established effects of drugs on various animals and tissues and computer assisted learning is found to be effective, interesting, economic and feasible method of teaching and learning without sacrificing and providing pain to animals. The study recommends use of computer assisted method for teaching. Study also points out need of computer training for the faculty and students as well as availability of more advanced simulators for demonstration and practical for undergraduate students. The study can be further expanded by comparing practical performance of students and including simulator based learning in Post graduate curriculum.