ABSTRACT: Aim of the present study was to compare antianxiety activity of various extracts of Oats (OA), Rice Bran (RB) and Spinach (SP) which are rich in phenolics mainly flavonoids and possesses excellent antioxidant property. Flavonoids are reported to have effect on central nervous system, mainly in anxiety disorders. The activity of various extracts (petroleum ether and hydroalcoholic) of all the three plants was evaluated at different doses (50, 100, 200 mg/kg of body weight) using EPM model of anxiety. The studies were conducted on swiss albino mice, and the test materials were administered per oral route. Results indicated that out of all the prepared extracts of the three selected plants, hydroalcoholic extract of Spinach (Spinacia oleracea) exhibited maximum and significant effect at 200 mg/kg of body weight, the results were comparable to the standard antianxiety drug diazepam (2 mg/kg p.o.).

INTRODUCTION: Anxiety is a feeling of apprehension, uncertainty or tension streaming from the anticipation of an imagined or unreal threat. Anxiety disorders cause immense suffering worldwide and hence search for antianxiety drugs has become important area of research. Benzodiazepenes, barbiturates and tricyclic antidepressents have been used for a long time to treat anxiety disorders. The benzodiazepines act via the benzodiazepine receptors which are present on the GABAA pentameric complex.

The most used drug is diazepam1. However, the clinical uses of benzodiazepines are limited by their side effects such as psychomotor impairment, sedation, myorelaxation, ataxia, amnesia and dependence liability 2, 3.

There is a need of drugs which possesses greater efficacy, lesser undesirable effects with minimum or no tolerance and dependence. Herbs are widely accepted sources of medicine, which play an important role in health care programme worldwide 4.

The brain is highly vulnerable to oxidative stress. Oxidative stress can alter neurotransmission, neuronal function and overall brain activity. Oxidative stress has been implicated in neurodegenerative diseases and neuropsychiatric diseases including stress and anxiety 5. Antioxidant therapy has been reported to have a protective effect in anxiety disorders 6. Polyphenols, flavonoids, specific foods and diets rich in antioxidants have been shown to improve antioxidant status and have anxiolytic effects 7, 8. For the present investigation, three common dietary plants that contain phenolic compounds and have marked antioxidant activity have been selected.

Rice Bran (RB), a by-product of rice (Oryza sativa) milling industry belongs to Graminae family. It is rich in micronutrients like tocopherol, oryzanol, phytosterols which comprises of Vitamin E due to which it posseses excellent antioxidant activity. It also contains oil, protein, carbohydrates dietry fibers like pectin, β-glucan and gum 17-20. The most abundant phenolic acid found in rice bran is ferulic acid. Flavones are most commonly present among the flavonoids. Tricin appears to be the major flavonoid present in the bran 21, 22. Traditionally it was used for digestion, toning muscles, increasing apetite, treating dysentery and as eye lotion 23. It has shown to decrease risk of coronary heart disease, reduction of blood cholesterol 24-27, controls Type I and Type II Diabetes Mellitus 28.

Spinach (SP) is a green leafy vegetable that came originally from south-western Asia, belongs to family Chenopodiaceae. A powerful, water-soluble, natural antioxidant mixture (NAO), which specifically inhibits the lipoxygenase enzyme, has been isolated from spinach leaves. NAO is composed of the active compounds mainly flavonoids and coumaric acid derivatives. Various flavonoids reported to be present are quercetin, myricetin, kampferol, apigenin, luteolin, patuletin, spinacetin, jaceidin, glucuronides and acylated diand triglycosides of methylated and methylene dioxide derivatives of 6-oxygenated flavonols 29. Traditionally it was used as antipyretic, diuretic, laxative, for sore eyes, vomiting, flatulence and urinary calculi 30. It is a good source of the bioflavonoid quercetin with many other flavonoids which exhibits anti-oxidant 31, antiproliferative 32, CNS depressant 33, hepatoprotective 34, anticancer 35 and anthelmintic activity 36.

So, the aim of the present study is to evaluate the antianxiety activity of petroleum ether (PE), and hydroalcoholic (HA) extracts of OA, RB and SP using EPM model of anxiety in experimental animals.

Collection and authentication of plant material:

Various pharmacognostic parameters of all the three plants were studied following standard procedures 37. All parameters such as moisture content (LOD method), ash values, extractive values were determined in triplicate.

The plants (Oats, Spinach) were dried in shade and powdered. Rice bran was used as such. The plant materials were separately subjected to successive exhaustive extraction with petroleum ether and methanol:water (70:30) in the Soxhlet apparatus. Petroleum ether (PE) and hydroalcoholic (HA) extracts were dried using rotary evaporator and yield calculated on dry weight basis. Dried extracts were preserved in vacuum desiccator for further use.

A phytochemical examination was carried out for both the extracts as per standard methods. 38

Swiss albino mice (weighing 25-30g) of either sex were procured from the animal house facility of the Chandigarh College of Pharmacy, Landran (Regd. No. 1201/a/08/CPCSEA). The animals were housed in standard polypropylene cage (two animal/cage) and maintained under controlled room temperature (22 ± 1ºC) with a 12:12h light and dark cycle. Water and food were available ad libitum. Groups of six mice were randomly assigned to different treatment groups. Control group received vehicle, one group was given standard drug Diazepam (2mg/kg p.o.) while test groups received PE and HA extract (50, 100 and 200 mg/kg p.o.).

The following treatments were employed in the study:

The effects of the drugs were estimated 45 min after the administration of dose. In each experiment, apparatus was cleaned using 5% ethanol before introducing the next animal to preclude the possible cueing effects of odours left by previous subjects.

The plus maze apparatus consisting of two open arms (16 x 5 cm) and two closed arms (16 x 5 x 12 cm) having an open roof with a plus maze, elevated 25 cm from the floor was used to observe anxiolytic behaviour of animals. The animals were fasted 18 h prior to experiment. The dose administration schedule was so adjusted that each mice was having its turn on plus maze after 45 min of administration of dose. Each animal was placed in the centre of the elevated plus maze with its head facing the open arms.

During the 5 min experiment, behaviour of the mice was noted as a) preference of the animal for its first entry to open/closed arm b) number of entries into the open arm c) average time spent by the animal in open arm. The antianxiety activity was recorded as average time spent by the animals in the open arms of the EPM. During the entire experiment each animal was allowed to socialize.  Every precaution was taken to ensure that no external stimuli disturbed the animal.

The results of various pharmacognostic parameters assessed are shown in Table 1.

Yield of extracts: The percentage yields of various extracts of A. sativa, O. sativa and S. oleracea are shown in Table 2.

Phytochemical Screening: The results of phytochemical screening of various extracts of A. sativa, O. sativa and S. oleracea are shown in Table 3. 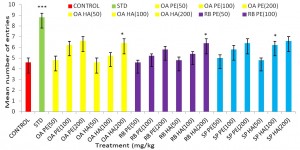 FIG. 1: EFFECTS OF VARIOUS TREATMENTS ON MEAN NUMBER OF ENTRIES BY THE EXPERIMENTAL ANIMALS IN OPEN ARM OF EPM

FIG. 2: EFFECTS OF VARIOUS TREATMENTS ON AVERAGE TIME SPENT BY THE EXPERIMENTAL ANIMALS IN OPEN ARM OF EPM.

DISCUSSION: In the present study, EPM model of anxiety was used to evaluate the anxiolytic effects of petroleum ether and hydroalcoholic extracts of Oats (Avena sativa), Rice Bran (Oryza sativa), Spinach (Spinacia oleracea). This is a model which uses the natural fear of rodents to avoid open and elevated places. The ratio of open and closed area entries reflects a specific effect on anxiety, provided there is no concomitant change in the total number of entries (open + closed). As expected, diazepam produced significant increase in time spent and number of entries into the open arms. Among all the extracts, hydroalcoholic extract of Spinach exhibited maximum antianxiety activity at 200 mg/kg dose followed by Rice Bran and Oats, and the activity was statistically comparable to diazepam.

Some of the plants rich in phenolics, specially flavonoids and possessing antianxiety activity are Pulsatilla nigricans 40 (Goyal & Kumar 2010), Tephrosia purpuria 41 (Sathish et al. 2001), Coriandrum sativum 42 (Mahendra & Bisht 2011), Gastrodia elata 43 (Jung et al. 2006), Citrus paradise 44 (Gupta et al. 2010). Flavonoids have been attributed to have its effect on central nervous system. Flavonoids and Diazepam are structurally similar. The anxiolytic effects of hydroalcoholic extract of Spinacia oleracea may be related to their flavonoid content. This effect has been attributed to the affinity of flavonoids for the central benzodiazepine receptors 45, 8. However further studies are needed to explore exact mechanism of action.

ACKNOWLEGMENT: Authors are thankful to I.K. Gujral Punjab Technical University and Chandigarh College of Pharmacy to help conduct this study.

DECLARATION OF INTEREST: The authors report no declarations of interest.