Irrational use of medicines results in poor patient clinical outcomes,   adverse drug reactions, economic burden and antimicrobial resistance. The objective of this study was to evaluate drug prescription patterns in private and public health sectors in Wolkite town, South West Ethiopia. The drug prescriptions were evaluated in 11 private and public health facilities, Wolkite town, South west Ethiopia. Total patient records of 600 were collected by systematic random sampling technique from patients attended the facilities from January 1 to December 31, 2011, retrospectively. One thousand two hundred twenty seven drugs were prescribed for 385 patient encounters making the average number of drugs per encounter 3.20 + 1.01 (private=3.33, public= 2.89). Three hundred and one (78.2%) patients in private and public health facilities were prescribed with at least one inappropriate drug. Inappropriate choice of drug 108 (28.0%), over prescription of drugs 89 (23.0%) and inappropriate duration of treatment 28 (7.2%) were the three most prevalent cause of inappropriate prescriptions in the health facilities. Much remains to be done to promote rational prescription of drugs in primary health care facilities.

INTRODUCTION: According to World Health Organization (WHO), rational drug use requires that patients receive medications appropriate to their clinical needs, in doses that meet their individual requirements for an adequate period of time, at an affordable cost 1, 2.

Rational drug use is achieved when there are a rational prescribing using medicines or drugs from an essential drugs list. Prescription drugs listed as essential are those which fulfill the real needs of the majority of the population in diagnostic, prophylactic, therapeutic and rehabilitative services using criteria such as risk-benefit ratio, cost effectiveness, quality, practical administration, patient compliance and acceptance 3.

Drug use studies using aggregate data or health facility indicators may indicate that there is over- or under-consumption of medicines. However, such studies do not provide detail about the exact nature of the irrational use: incorrect medicine choices, incorrect dose, prescribing drugs that cause adverse drug reactions or drug interactions, and the use of expensive drugs. Such details of drug utilization are addressed by Drug Use Evaluation (DUE) 4.

Drug use evaluation, as a term introduced officially in 1994, is a system of ongoing, criteria-based evaluation of drug use that will help ensure that medicines are used appropriately (at the individual patient level).

A DUE is drug- or disease - specific and can be structured so that it will assess the actual process of prescribing, dispensing or administering a drug 4.

Drug use can be evaluated retrospectively or prospectively. Retrospective DUE is better than prospective one with regard to its suitability to perform since drug therapy is reviewed after the patient has received the medication and have an advantage of avoiding patient destruction during treatment. In retrospective DUE, patient medical charts or computerized records are screened to determine whether the drug therapy met approved criteria and aids prescribers in improving care for their patients, individually and within groups of patients 5.

Issues commonly addressed by retrospective DUE are appropriateness of indication, over and under utilization, appropriate generic use, therapeutic duplication, drug-disease contraindications, drug-drug interactions, incorrect drug dosage, inappropriate duration of treatment, and clinical abuse/misuse 6.

Prescriptions are considered inappropriate when there are contraindicated existing medical conditions, potential drug interactions, known documented allergies, wrong doses prescribed, inadequate monitoring, more than one drug prescribed when only one is necessary, drugs prescribed for which there is no indication 7.

Irrational use of drug is a common practice; nearly half of the world’s patients receive their drug inappropriately. Ethiopia cannot be an exception as availability of essential medicines, trained health care providers and literacy level of patients is low which is in coherent with the countries low economic status 10, 11.

Inappropriate medicines use wastes scarce economic resources that could be used for food or other necessities 10. The share of out-of-pocket expenditure on drugs in Ethiopia is very high (47%). This results in low economic access to drugs, particularly by the poors, and creates equity problem 11, 12.

METHODS: The study was conducted in public and private primary health care facilities of Wolkite town, South West Ethiopia from February 15 to March 15, 2012. Wolkite town which is located 150 kms from the capital city, Addis Ababa, is the second largest town in Southwest Ethiopia 13, 14.

In the town there were one health center, two clinics, one health post and two pharmacies. Whereas the private health sector had six medium clinics, two lower clinics, and six drug shops 14.

Patient medical card of one year, from January 1 to December 31, 2011, were reviewed retrospectively from 8 private clinics and 3 public health facilities. For determination of the sample size for drug use evaluation, usually the Joint Commission for Accreditation of Health Organizations (JCAHO) Criteria is followed which states; if the average number of cases per quarterly is more than 600, at least 5% of cases are reviewed 10.

Data Analysis: Data was checked for its completeness every day. The data outcome from those evaluations by the professionals was entered into Statistical Package for Social Sciences (SPSS) version-16.0 software to be edited, cleaned and analyzed. The data were summarized and described using cross tabulation and bivariate analysis with 95% confidence interval to infer associations and predictions.

Simple bivariate logistic regression analysis was employed to see the association between patients (age, sex, drug, disease, and education) and health sectors characteristics versus prescription appropriateness. Then, to control the effect of confounding factors, each variable was entered in to multiple logistic regression models as the independent variable with each medication use indicators being a dependent variable in order to identify independent predictors of process criteria and medication use indicators.

RESULTS: Patients’ socio-demographics who attended the health facilities in Wolkite town are shown in table 1. The average age of patients was 24.7 (SD = 3.0) years. Male to female patients’ ratio was 1.03, which showed comparable number of patients each gender visited the health facilities. Fifty (13.0%) patients were under the age of five. Two hundred eighty three (73.5%) patients were in the age range of 15-44 years. Nine (2.3%) patients had age of greater than 64 years.

Eighty six (30.1%) patient encounters in private and 22 (21%) patient encounters in public were prescribed with at least one inappropriate medication (table 2). Such inappropriate prescriptions include prescribing chloroquine for malaria without identifying the parasite species, dipyrone (obsolete drug) for pain, ciprofloxacin for intestinal parasite, amoxicillin for malaria and paracitamol for arthralgia.

Under prescription was demonstrated by not prescribing anti-inflammatory drug for a patient with diagnosis of arthritis.

Fifteen (5.4%) patients from private and 9 (8.6%) patients from public health facilities received at least one inappropriate drug dosage/ route. For example, procaine penicillin fortified Intramuscular (IM) injection for 7 days for a patient with diagnosis of pneumonia, and prescription of diclofenac IM injection for 5 days, while the patients were able to take oral medications.

Therapeutic duplication was observed solely in private encounters of 14 (5%). Such prescriptions include IM benzathine penicillin and amoxicillin for tonsillitis; cotrimoxazole and ciprofloxacin for bacillary dysentery; doxycycline and ciprofloxacin for pneumonia; ibuprofen and diclofenac for Non Specific Arthritis (NSA); and omeprazole and aluminum hydroxide + magnesium hydroxide for gastritis.

Eight (2.0%) patient encounters only from private health facilities were prescribed with potentially interacting drugs. Among them iron sulfate with aluminum hydroxide + magnesium hydroxide was the most frequent.

Eighteen (4.7%) patient encounters had prescriptions of inappropriate dosage regimen. For example, iron sulfate was prescribed  BID for anemia instead of TID, amoxicillin BID for  tonsillitis instead of TID, chloroquine phosphate tablet (strength- 150 mg) dosage regimen of 3, 3, 2 in three consecutive days for a patient age 29 years instead of 4, 4, and 2. The differences in inappropriate drug prescriptions among patient age groups and between male and female genders, at 95% confidence, was not significant. 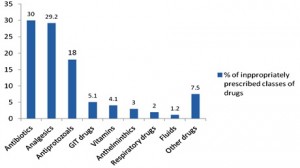 Drugs frequently associated with inappropriate prescriptions are shown in Figure 3. These drugs comprised 61.4% (467) of the total inappropriately prescribed drugs.  Among the ten drugs shown, diclofenac, chloroquine, ciprofloxacin, paracetamol and amoxicillin were the top five drugs frequently associated with inappropriate prescriptions. Except vitamin B- complex, all drugs in this figure shown are from three classes of drugs: antibiotics (four drugs), analgesics (two dugs) and antimalarials (two drugs). 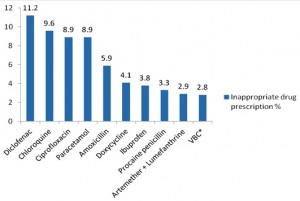 Overall 33.7% of drugs prescribed to patients in the health facilities were found to be inappropriate. This finding was actually higher than findings from United Kingdom, United States of America and Saudi Arabia but lower than that of the Mexican finding 19-22.

Twenty eight percent of encounters received one or more inappropriate indicated prescriptions in their visit to the private and public health facilities. This was comparable to findings from Mexico but lower than USA and higher than a study from India 19, 23, 24.

Inappropriate medicines use wastes scarce economic resources that could be used for food or other necessities. Unnecessary over use of medicines can stimulate inappropriate patient demand and lead to medicine stock‐outs and loss of patient confidence in the health system10. Over/ underutilization of medications were seen in 23% of patient encounters. This figure was quite higher than that of Bahraini and Mexican study findings 19, 25.

Seven percent of patients obtained prescriptions with inappropriate duration of treatment. This is quite very high when compared to the study from Bahrain 25.

About 4.7% of patient encounters received prescriptions of inappropriate doses. This value was indeed lower than that shown in India and Mexico but higher than that of Canada 19, 24, 26. Most studies in Middle East and Europe showed dosage regimen as the top drug problem in primary health care facilities 20, 23, 27, but in the present study dosage regimen was the fifth top problem only above therapeutic duplication, drug disease contraindication and drug-drug interaction. This could be because no complex drugs dosage regimen seen in the study set up as infectious disease prevalent unlike the developed countries where chronic diseases are prevalent which need drugs like digoxin, theophylline and others whose dosage regimen adjustment is very complicated .

Again 2% of patient encounters received potentially interacting drugs. This was lower than what was found from Bahrain, India, and Mexico but higher than what was seen in Canada 19, 24, 25, 26.

Limitations of the Study: In drug prescription appropriateness evaluations, patient medical records were used. So it is difficult to be sure whether patients took the drugs as prescribed by the prescribers or not.

CONCLUSIONS: The present study shows that inappropriate prescription is being practiced both in private and public health facilities in the study area which might give a clue for prescription practice in the country. This needs immediate attention to correct the malpractice.

ACKNOWLEDGMENT: The researchers would like to thank the Gurage Zonal health bureau, Wolkite Town health administration office, the Wolkite town health institutions administrations and professionals for their keen cooperation during the study.