COMPARATIVE EVALUATION OF HEPATOPROTECTIVE EFFECTS OF EXOTIC FRUITS AND COMMON VEGETABLES EXTRACTS ON CCL4 INDUCED HEPATOTOXICITY: AN IN VITRO STUDY

COMPARATIVE EVALUATION OF HEPATOPROTECTIVE EFFECTS OF EXOTIC FRUITS AND COMMON VEGETABLES EXTRACTS ON CCL4 INDUCED HEPATOTOXICITY: AN IN VITRO STUDY

ABSTRACT: Liver toxicity faces a major challenge in world health issues. Many drugs are being withdrawn from the market by Food and Drug Administration (FDA) for causing drug induced hepatotoxicity. In the present study, ameliorative activity of methanoic extracts of different parts (Peel, Pulp and seed) of exotic fruits and vegetables on carbon tetrachloride (CCl4)-induced hepatotoxicity were studied in in vitro condition. Chicken liver cell suspension treated with CCl4 was used for lipid peroxidation (LPO), free radical scavenging and sodium dismutase (SOD) assay. Extracts from different parts of exotic fruits and common vegetables showed potent antioxidant effect. In the present study even, methanoic extract of some unused parts (peel & seed) of vegetables and fruits showed hepatoprotective action, but among all these bottle gourd pulp (vegetable) and passion fruit pulp (exotic fruit) showed the noteworthy hepatoprotective action.  Thus it is concluded that, the methanoic extracts of exotic fruits and vegetables was observed to have notable protective activity on CCl4 induced hepatotoxicity

INTRODUCTION: The liver is the body’s largest glandular and principle organ for maintaining the body’s intramural environment. The liver supports almost every organ in the body in some facet and is vital for survival.

Some of these major functions include protein, carbohydrate and fat metabolism, detoxification, secretion of bile and storage of vitamin. It performs multiple critical functions to keep the body pure by filtering toxins and many drugs from the blood; transforms and excretes. Thus, to maintain a healthy liver is a crucial factor for the overall health and well being of human1.

Even though liver has tremendous regeneration capacity, the liver injury morbidity has been increasing vigorously. Among all the causes for hepatotoxicity, drug induced liver injury is prominent. It has an estimated annual incidence between 10 and 15 per 10,000 to 100,000 persons exposed to prescription medications 2 and Drug-induced acute liver failure (ALF) accounts for approximately 20% of ALF in children and a higher percentage of ALF in adults 3. Hence hepatotoxicity is nowadays one of the most important pharmacovigilance concerns and the leading cause for drug withdrawal on safety grounds 4.

Chemical toxins (including acetaminophen, carbon tetrachloride, galactosamine and thioacetamide are often used as the model substances causing experimental hepatocyte injury in both in vivo and in vitro conditions 5-8. Most of the hepatotoxic chemicals cause damage to the hepatocytes by inducing lipid peroxidation 9. Liver cirrhosis induced by CCl4 is perhaps the best-studied model of liver cirrhosis 10. CCl4 was the first toxin for which it was shown that the injury produced is largely or entirely mediated by a free-radical mechanism. It is believed that CCl4 is metabolized by the cytochrome P450 system to give the trichloromethyl radical, a carbon-centred radical. Covalent binding of trichloromethyl free radicals to cell proteins is considered to be the initial step in a chain of events that eventually lead to membrane lipid peroxidation (LPO) and finally to cell apoptosis and necrosis 11-13.

High levels of reactive oxygen species (ROS) damage cells and are involved in several human pathologies, including liver cirrhosis and fibrosis. Among the degradation products of fatty acids are reactive aldehydes, malondialdehyde (MDA), and 4-hydroxynonenal, which bind easily to functional groups of proteins and inhibit important enzyme activities. Disturbed cellular processes are most likely due to increased levels of these thiobarbituric acid reactive species (TBARS) 14, lactate dehydrogenase (LDH) leakage as a result of membrane breakdown and concomitant increase in membrane permeability 15, loss of cell protection, witnessed by GSH depletion and as a result of all these changes - cell death. The second phase of CCl4 - induced hepatotoxicity involves the activation of Kupffer cells, which is accompanied by the production of proinflammatory mediators 16. Hence, CCl4 – induced hepatotoxicity serves as an excellent model to study the molecular, cellular and morphological changes in the liver 17.

Hence extracts with high free radical scavenging activity/antioxidants may show hepatoprotection. Antioxidants also turn free radicals into waste byproducts, and they eventually get eliminated from the body. They also have the ability to repair previous damage to cells. However, consumption of fruits and vegetables is known to lower the risk of several diseases, and such health benefits are mainly imposed due to the presence of phytochemicals, such as polyphenols, carotenoids and Vitamin E and C.

There are approximately 5000 known plant phenolics and model studies have demonstrated that many of them have antioxidant activity18.  Ayurveda, Siddha, Unani etc., are practiced in India and these practices take totally rely on the plant source. As a natural way, consumption of fruits and vegetables has showed therapeutic values in these traditional medicines.  Majority of edible plants and its parts such as fruits, seeds, leaves and roots are also observed to have medicinal value substances, such as antioxidants, flavonoids, tannins and other phenolics compounds19. Therefore in the present study we have tried extracts different parts of exotic fruits and common vegetables on hepatoprotectivity.

Analytical grade Carbon Tetrachloride (CCl4) was procured from Hi-Media Laboratory Pvt Ltd, Bengaluru. Methanol was purchased from Chethana chemicals, Mysore. All other chemicals used in the present study were of analytical grade.

Lipid peroxidation was estimated colorimetrically by measuring malondialdehyde (MDA) 21, 22. In brief, 0.5 ml of homogenate treated with 0.5 ml carbon tetrachloride and 100µg/ml of fruit/vegetable extract along with 2 ml of a 1:1:1 ratio of TBA-TCA-HCl (TBA 0.6%, TCA 15%, HCl 0.25 N) reagent added and placed in water bath at 65°C for 15 min, cooled, and centrifuged at 5,000 rpm for 10 min at room temperature. The optical density of the clear supernatant was measured at 535 nm. Controls were prepared similarly without CCL4 for each extract. The MDA formed was calculated by us­ing the molar extinction coefficient of thiobarbituric acid reactants (TBARS; 1.56 x 105 l/mole cm−1). The product of LPO was expressed as nmol of MDA formed per g of tissue.

Free radical scavenging activity was measured by a decrease in absorbance at 517 nm of a solution of coloured 2, 2-Diphenyl-1-Picrylhydrazyl (DPPH) in methanol brought about by the sample. To the 1ml methanolic solution of DPPH, 0.5 ml of homogenate treated with 0.5 ml carbon tetrachloride and 100µg/ml of fruit/vegetable extract was added. The reaction mixture was allowed to incubate for 30 min at room temperature in the dark and the absorbance of the resulting mixture was measured at 517 nm against ascorbic acid as standard 23. Controls were prepared similarly without CCL4 for each extract. The scavenging activity was calculated as follows:

The assay of SOD is based on the inhibition of the formation of NBT- diformazan which is measured at 560nm. Cuvets containing 1.17X1O-6M riboflavin, 0.01 M methionine, 2X10-5M sodium cyanide, 5.6 X 1O-5M NBT, and 0.05 M potassium phosphate at pH 7.8 were illuminated and the absorbance was read at 560nm 24. Controls were prepared similarly without CCL4 for each extract. The % inhibition was calculated by

Fresh exotic fruit (Table 1a) and vegetables (Table 1b) were purchased from hopcoms and were washed under running tap water and their peel, pulp and the seeds were separated. They were shade dried separately for over a month. The dried fruit parts were ground using a mechanical grinder. Each of the samples was approximately weighed and subjected to extraction by cold maceration with 80% methanol at room temperature. The macerate was allowed to soak in 80% methanol for 72 hours 25. The samples were filtered after 72 hours using regular filter paper. The methanolic extracts thus obtained was collected in the vials and stored at 4o C.

RESULTS AND DISCUSSION: Liver is the very important part of our body responsible for the maximum metabolic and secretary activities and therefore appears to be a sensitive target site for substances modulating biotransformation. Liver is also associated in detoxification from the exogenous and endogenous challenges like xenobiotics, drugs, viral infections and chronic alcoholism. CCl4 has been extensively used to study liver injury induced by ROS in the animal models, which is closely analogous to hepatotoxicity in humans. The toxic effects of CCl4 are the consequences of production of free radicals. Unless neutralized by radical scavengers, these peroxyl radicals in turn abstract hydrogen atoms from other lipid molecules, thereby propagating the process of LPO 26.

The present study was planned to evaluate toxic effects of carbon tetrachloride by a biochemical parameter indicative of oxidative stress and its amelioration by different fruits and vegetables in in vitro.

It is well documented that the many life forms have enzymatic and non-enzymatic antioxidant systems, which possess the ability to protect the body from damage caused by free radicals as self defensive mechanism and Superoxide dismutase is one among them. Superoxide dismutase is an antioxidant enzyme which metabolizes toxic oxidative intermediates. SOD catalyzes the conversion of superoxide radicals to hydrogen peroxide. So, the accumulation of peroxide or products of its decomposition may also be aided by a decrease in SOD activity 27.  In the present study passion fruit pulp among fruits and bottle gourd pulp among vegetables showed high SOD activity. 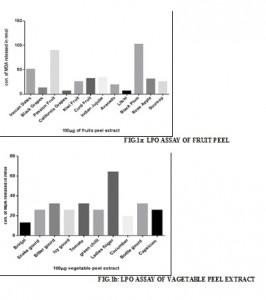 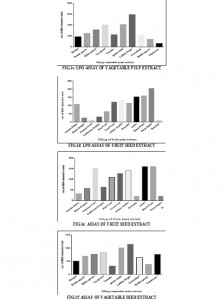 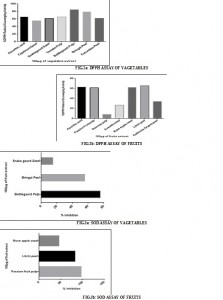 CONCLUSION: This paper reports the use of whole plant (peel, pulp, seed) extracts of commonly used vegetables and exotic fruits on hepatoprotection.  It showed all the extracts with potent action on hepatotoxicity. This it is concluded from the above results that even the unused parts of the exotic fruits and common vegetables methanoic extracts showed a significant anti-hepatotoxic effect on CCl4 induced liver toxicity in Invitro condition.

ACKNOWLEDGMENT: The authors are grateful to Division of biochemistry, Faculty of life science, JSS University, Mysuru for their honest cooperation.