ABSTRACT: Transdermal drug delivery system (TDDS) involving HPMC-PVA patches were prepared as matrix-dispersion system with Pioglitazone HCl (PH) or Gliclazide (GZ) and drug release pattern from these patches were evaluated in-vitro as well as in-vivo. It has been found that 82.41% of Pioglitazone HCl and 70.12% of Gliclazide were released in-vitro in the period of 12 hours and the release patterns was zero-order. In-vivo skin permeation studies in alloxan-induced diabetic rats showed significant improvement on day-to-day diabetic control. Treatment with the patches induced hypoglycemia in normal rats whereas in diabetic rats blood glucose level returned to normal level within 16 hours. These findings suggest that delivery of these drugs through TDDS may overcome the first-pass effect when administered orally and thus gives better glycemic control in diabetic patients

INTRODUCTION: Transdermal drug delivery system (TDDS), also known as ‘Transdermal Patch’ is a self containing, discrete dosage forms which when applied to the intact skin, deliver the drugs through the skin at a controlled rate to the systemic circulation. These systems are easy to apply and remove as and when desired 1. TDDS increase the patient compliance and reduces the load as compared to conventional injection and oral methods.

Transdermal patches are delivered the drug through the skin in controlled and predetermined   manner   in   order   to   increase   the therapeutic efficacy of drug and reduced side effect of drug 2. Another advantage is convenience, especially notable in patches that require only once weekly application 3.

Pioglitazone HCl (PH) is a thiazolidinedione antidiabetic agent that depends on the presence of insulin for its mechanism of action 4. It decreases insulin resistance in the periphery and in the liver resulting in increased insulin-dependent glucose disposal and decreased hepatic glucose output. Whereas, gliclazide (GZ) is a weak acid having molecular weight of 323.4 Da and an oral hypoglycemic (anti-diabetic drug) and is classified as a sulfonylurea 5. This article describes herein the formulation and in-vitro as well as in-vivo evaluation of a transdermal preparation of Pioglitazone HCl and Gliclazide.

Preparation of HPMC-PVA based TDS patch and drug loading:

TDS patches were formulated using polymers - HPMC and PVA as described previously 6, 7. Weighed amounts of PVA (80 mg for PH, 100 mg for GZ) were taken in a beaker and distilled water (8 ml for PH, 10 ml for GZ) was added to it and heated on a hot plate. HPMC (250 mg for PH, 300 mg for GZ) was added in the melted PVA and mingled properly with a glass rod. Then, drugs (15 mg of PH, 80 mg of GZ) were added and placed separately in film boxes which act as a backing layer. The patches obtained in this way were cooled and introduced separately in respective film box. Then the film boxes with HPMC-PVA based TDS-patches were subjected to three successive freezing (-20°C) for 16 hours followed by thawing for 8 hours (room temperature).

In this way, three successive cycles were performed to get the perfect cross-linked hydrogel patch with good mechanical resistance, white and opaque, which proves heterogeneous structure 8.

The dissolution studies of Pioglitazone HCl and Gliclazide in TDS-patch containing of HPMC and PVA in the formulation was carried out in an Electrolab Tablet Dissolution Tester (USP XXI TDT – 06). Dissolution studies of PH and GZ-loaded MC formulations were carried out in USP XXI dissolution apparatus type II. The TH and GZ-loaded patches were suspended in 900 ml of phosphate buffer of pH 5.4 as dissolution medium stirring at 50 rpm and maintained at constant temperature (32 ± 2°C). At predetermined time intervals, 5 ml aliquots were withdrawn and replaced by an equal volume of fresh pre-warmed dissolution medium. After suitable dilution, the samples were analyzed at 269 nm (λ max of PH) and 274 nm (λ max of GZ) using UV–Vis spectrophotometer taking phosphate buffer pH 5.4 as blank. The concentration of the PH and GZ released at different time intervals was determined.

The animals used for in vivo experiments were adult albino rats (4-6 weeks old) of either sex, weighing 120-140 g, from the Department of Pharmacy, Jahangir Nagar University, Savar, Dhaka. The animals were housed in polypropylene cages, four per cage, with free access to standard laboratory diet and water. They were kept under standard environmental conditions and all experiments were approved by the relevant ethics committees. Diabetes was induced by intraperitoneal injection of 120 mg/kg of alloxan monohydrate in sterile saline water.

Animals were fasted for 16h prior to drug administration allowing access only to water and were deprived of food during the experiment. Fasting blood glucose levels were measured on hour 72 and when the condition of diabetes were established in animals with a blood glucose level of 200 mg/dl or more, they were separated and used for the study.

For evaluating the hypoglycemic activity of PH and GZ-loaded patch, healthy rats were divided into four groups (n = 5). The hair on the backside of the rats was removed with an electric hair clipper on the previous day of the experiment. All the rats were kept fasting before 24 h of the experiment, and then,  the rats of Group II and Group IV were treated with PH and GZ-loaded TDS-patch.

Blood samples were collected from orbital sinuses using heparinized capillaries, and the blood glucose levels were determined by placing one drop of the fresh blood on One touchTM BasicTM plus Blood glucose meter (Life scan, Incorporation 2000, USA) (Fig. 2). 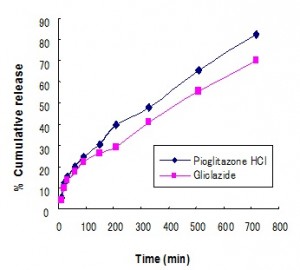 FIG. 3: PIOGLITAZONE HCL AND GLICLAZIDE RELEASE FROM HPMC-PVA BASED TDS-PATCHES

p< 0.05 was considered as significant. All values were reported as mean ± SD.

RESULTS AND DISCUSSION: In vitro dissolution study of PH-loaded and GZ-loaded transdermal patch is depicted in Fig. 3. PH-loaded and GZ-loaded TDS-patches exhibited 82.41% and 70.12% respectively, cumulative percentage of drug release in 12 hours exhibiting a significant control on the release of drug (p<0.01). The study was performed using phosphate buffer with pH 5.4 which simulated the skin pH. The shape of the curve indicated the release of PH and GZ from the patch followed zero-order process.

To study in-vivo hypoglycemic activity of the drug-loaded TDS-patches, diabetes was induced in normal rat by the application of alloxan. Alloxan is used in medical research to produce experimental diabetes, since it is selectively destroys the cells of the pancreas that secrete insulin 9. Pioglitazone improves glycemic control by increasing insulin hypersensitivity and Gliclazide improves glycemic control by increasing insulin release. The mechanism of action of Pioglitazone HCl is by activation of the nuclear receptor peroxisome proliferator-activated receptor gamma (PPAR-γ) and to a lesser extent PPAR-α 10. In Type-2 diabetes Pioglitazone improves glycaemic control by improving insulin sensitivity through its action at PPAR gamma 1 and PPAR gamma 2, and modulates lipid metabolism through action at PPAR alpha.

These interactions causes increase in glucose transporters 1 and 4, reduced free fatty acids, enhanced insulin signalling, normalized tumour necrosis factor alpha (TNF alpha) level and remodelling of adipose tissue. Taken together, these results can increase glucose uptake and metabolism in the peripheral organs and decrease gluconeogenesis in the liver, thereby reducing insulin resistance. The mechanism of Gliclazide is it binds to sulfonylurea receptors on the surface of the Beta islet cells found in the pancreas 11. This binding effectively closes the K+ ion channels. This decreases the efflux of potassium from the cell which leads to the depolarization of the cell. This causes voltage dependent Ca++ ion channels to open increasing the Ca++ influx. The calcium can then bind to and activate calmodulin which in turn leads to exocytosis of insulin vesicles leading to insulin release. 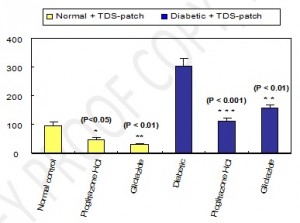 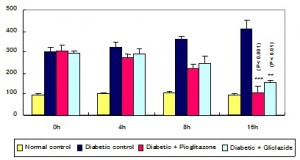 The in-vivo study (Fig. 4 and 5) indicated that the transdermal systems of PH and GZ produced significant hypoglycemic effect (P < 0.05 for PH, P < 0.01 for GZ) in the normal rats after 16 hrs of treatment. Compared with diabetic control group, pioglitazone and gliclazide produced significant decline in the blood-glucose concentration (P < 0.001 for PH, P < 0.01 for GZ) in the diabetic rats. It took 16 hrs to bring the blood glucose level of the hyperglycemic rats to normal. PH and GZ-loaded patches produced hypoglycemia in the normal rats in the same treatment duration.

CONCLUSION: On treating with TDDS of Pioglitazone HCl and Gliclazide in normal rats hypoglycemia was observed (< 60 mg/dl) and in diabetic rats blood glucose level returned to normal level (112 mg/dl for PH, 155 mg/dl for GZ) within 16 hours. Here results predict that Pioglitazone HCl and Glicazide from HPMC-PVA blend patches easily crosses across the skin to the systemic circulation. This study suggests new therapeutic tools to treat diabetic patients.