ABSTRACT: Stannous chloride (SnCl2), an inorganic salt and Dimethyltin dichloride (DMTC), the organic species were found to influence the survival and nitrogen assimilatory system of Nostoc muscorum. A difference in the survival fractions suggested for differential susceptibility of the strain to the toxic effects of the either tin species. Growth of the Nostoc muscorum cells, measured as a function of graded concentration of SnCl2 and DMTC, both in the absence and presence of exogenous nitrogen sources, revealed an increased tolerance of Nostoc cells in the presence of nitrite (NaNO2), next to nitrogen-fixing condition. DMTC induced decline in the Nitrate Reductase (NR) and stimulation in the Glutamine synthetase (GS) activity indicated nitrogen starvation like condition. On the other hand, a vice versa result obtained with SnCl2 suggested for toxic effect of the inorganic nitrogen species.

INTRODUCTION: The use of tin and organotin (OT) compounds in fungicides, acarisides, disinfectants, antifouling paints including a variety of agricultural applications have been found to pose serious environmental threat 1. An extensive use of organotin compounds as antifouling agents over the recent years are considered as important pollutants in aquatic ecosystems 2, 3. Methylated tin species are also formed in the environment through the methylation of natural sources of tin, but they are also introduced into the environment via various industrial and anthropogenic activities 4, 5.

The known toxicity potential of organotin compounds has given rise to increasing concern about the environmental impact of these substances and their effect on microorganisms 6. Since tin is one of the metals commonly found in sea water an attempt was made to investigate the dependence of tin toxicity on chemical speciation. Nostoc muscorum is a heterocystous cyanobacterium which offers an appropriate model system for studying the structural and functional changes induced by organic and inorganic tin species.

In the aforesaid context, a comparative evaluation of the effect of SnCl2 and DMTC on diazotrophic growth and nitrogen metabolism of Nostoc muscorum was studied. Although, it appears that organic tin compounds poses significantly greater threat in aquatic environment than less bio available inorganic forms 7.

An estimation of toxicity of inorganic tin has to be related also to its organic tin species 8.

MATERIAL AND METHODS: Organism and growth condition: Unialgal culture of Nostoc muscorum was obtained from the National Centre for Conservation and Utilization of Algae, Indian Agricultural Research Institute, New Delhi, India. It was axenically grown in steam sterilized modified Chu-10 medium 9. The culture flasks were incubated at 25 ± 1 °C and illuminated daily for 14 hours with cool, white fluorescent tubes emitting 10 Wm-2 light at the surface of the culture vessels.

Measurement of Growth: Growth of Nostoc muscorum was measured in terms of turbidity at 665 nm wave length (UV-Spectrophotometer 1601 Shimadzu, Japan). The effect of SnCl2 and Dimethyltin dichloride (DMTC) on the growth of Nostoc muscorum was monitored both in the absence and presence of Potassium nitrate (4µM), Ammonium chloride (2µM), and Sodium nitrite (2µM). The pH of the basal medium was adjusted by using the HEPES-HCl buffer (pH: 8, 20 mM). SnCl2 and DMTC stock solutions were neutralized at the time of inoculation.

RESULTS AND DISCUSSION: Growth response of Nostoc muscorum to increasing concentration of both SnCl2 and DMTC (10 - 100µg/ml) was studied under nitrogen-fixing condition (Fig. 1a), as well as under nitrate (4µM), (Fig. 1b) nitrite (2 µM) (Fig. 1c) and ammonium (2µM) supplemented condition (Fig. 1d). Results on the growth revealed a concentration dependent decline in growth under all conditions. Similar result has been reported by Soracco and Pope (1983) 14, where, Tri Butyl Tin Oxide (TBTO) was found to induce a concentration dependent decline in the growth rate of the bacterium Legionella pneumophila. Further results revealed that the growth of Nostoc muscorum was more susceptible to DMTC as compared to SnCl2 as evident from 50% growth inhibitory concentration of SnCl2 and DMTC for Nostoc cells (Table 1).

TABLE 1: LD50 OF SnCl2 AND DMTC FOR NOSTOC MUSCORUM CELLS

The results conspicuously revealed that SnCl2 was less toxic compared to DMTC both under N2 fixing as well as N2 supplemented condition. Eng et al., (1998) 15 proposed that toxicity also correlates with the total molecular surface area of the compound. In this case, butyl compounds together with phenyl, and pentyl-substituted compounds should be the most toxic, while methyl-substituted OTs are expected to show less effect  (White et al., 1999) 16 Mono, di and tri-alkyltins have been shown to be toxic to a wide range of aerobic and anaerobic bacteria 17-20. Studies on the effect of exogenous nitrogen sources on amelioration of toxicity induced by the individual tin species revealed that to some extent nitrite (2mM) provides an increased tolerance to Nostoc muscorum cells against the toxic effect of both SnCl2 and DMTC.

The difference in survival fractions of Nostoc muscorum cells towards SnCl2 and DMTC is obviously due to differential toxicity of inorganic and organic tin species. The general order of toxicity of tin compounds to microorganisms increase with the number and chain length of organic groups bonded to the tin atoms, and inorganic tin are known to be less toxic than the organic compounds 16. The activity of NR and GS (transferase assay) was measured in Nostoc muscorum cells as a function of the toxicity of the individual tin species. Measurement of NR activity in the cells after SnCl2, (25-100µg/ml) treatment for 48 hr, showed a concentration dependent marginal increase in activity. While, DMTC, (25-100µg/ml) induced decline in the NR activity was observed throughout the concentration range (Fig. 2). As compared to NR activity, the GS activity in the SnCl2 and DMTC treated cells showed an opposite pattern (Fig. 3). GS activity in the SnCl2 treated cells initially showed about 1.7 fold increases in the rate. But at higher concentration (25-120µg/ml) the activity declined with increasing SnCl2 level.

There was approximately 3 fold decrease in the GS activity at 100µg/ml. On the contrary, DMTC treated cells revealed a concentration dependent two fold increase in GS activity at 100µg/ml concentration. Effect of SnCl2 on the two key enzymes of N2 assimilatory system i.e. NR and GS showed a SnCl2 induced marginal increase in NR activity and significant decline in the GS activity. Interestingly, the DMTC treated cells showing a reduced rate of NR activity despite an increased GS activity suggested for N2 starvation like condition in the cells. It can also be further suggested that SnCl2 and DMTC sensitivity in Nostoc muscorum depends upon intracellular nitrogen status. Pesticides like Amitrol, Diquat, Paraquat, Linuron, MCPA, Malathion and Monuron are also known to hamper the N2-fixing potential of the cyano-bacterial cells at higher concentrations 22. Lower concentration of carbofuran increases the heterocyst frequency and total nitrogen fixed by Nostoc muscorum 22. But higher concentrations have an adverse effect on the nitrogen fixing ability of the cyanobacterium 22. Since it has been suggested earlier that GS is regulated by intracellular pool of amino acids, a decline in GS activity in SnCl2 treated cells may be due to direct interference of the inorganic tin species with amino acid metabolism 23. 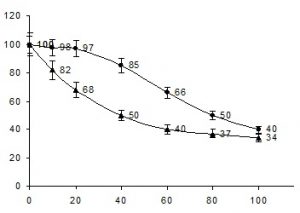 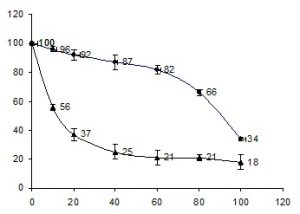 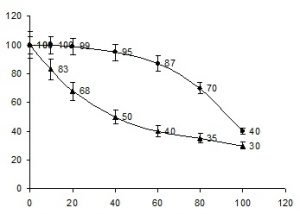 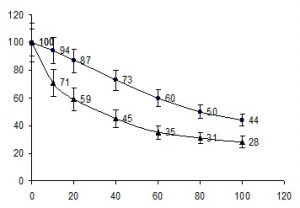 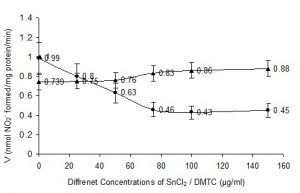 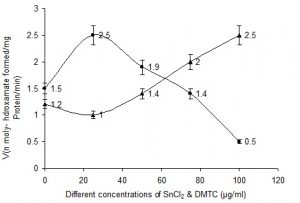 FIG. 3: EFFECT OF VARYING CONCENTRATION OF SnCl2 AND DMTC ON GS ACTIVITY MEASURED IN NOSTOC MUSCORUM CELLS AFTER 48 HOURS OF TREATMENT

CONCLUSION: Growth of the Nostoc muscorum cells was measured as a function of graded concentration of SnCl2 and DMTC, both in the absence and presence of exogenous nitrogen sources. Results clearly revealed an increased tolerance of Nostoc cells to both in tin species, in the presence of nitrite (NaNO2), next to nitrogen-fixing condition. DMTC induced decline in the Nitrate Reductase (NR) and stimulation in the Glutamine synthetase (GS) activity indicated nitrogen starvation like condition. On the other hand, a vice versa result obtained with SnCl2 suggested for toxic effect of the inorganic nitrogen species.