ABSTRACT: Cyanobacteria are a gram-negative group of microorganisms with unique features and found in diverse conditions of the environment. These tiny bio-factories are rich in pigment molecules like chlorophylls, carotenoids and phycobiliproteins. Studies on physiological and biochemical characteristics of different cyanobacterial strains will not only help to determine their biotechnological potential but also determine and interpret the appropriate growth conditions of these tiny microorganisms in their natural habitat. This paper focuses on the growth, chlorophyll, carotenoid and phycobilin production in two freshwaters (Anabaena cylindrica and Anabaena PCC7120), one halotolerant (Anabaena KP737864) and two marine cyanobacterial strains (Synechococcus BDUSM-13 and Nostoc BDUMM-70). Significant differences were observed among the strains with regard to their pigments. Maximum chlorophyll and phycobiliprotein content were observed on the 14th day of cultivation in all strains. The filamentous cyanobacteria Anabaena cylindrica recorded maximum production of phycocyanin, marine Synechococcus BDUSM-13 produced maximum phycoerythrin (17.33 µg/ml). Anabaena KP737864 was reported to acquire more amount of allophycocyanin (12.66 µg/ml) of phycobiliproteins.

INTRODUCTION: Cyanobacteria are the ancient lineage of photo-oxygenic bacteria on the Earth more likely to be present since 2600 million years ago 1. Due to their competence in performing oxygenic photosynthesis, cyanobacteria are linked with the changes of ancient reductive to the lively oxidative state of atmosphere 2.

Earlier they have been grouped with eukaryotic algae, but due to their specific physiological and morphological characteristics of gram-negative bacterial cell structure, they are currently considered as prokaryotes 3.

Cyanobacteria possess a range of characteristic shapes, sizes, smells, textures, second light-harvesting antenna complex, heterocyst for nitrogen fixation, etc., which allow them to adapt to the harsh environmental changes from terrestrial to aquatic habitats 4, 5, 6. They have been described as excellent sources of chlorophyll, carotenoids, phycobiliproteins, exo-polysaccharides, proteins and other biologically active metabolites 7.

Cyanobacteria contain only one form of chlorophyll that is chlorophyll A which is green pigment present at the photosynthetic reaction center. In addition, they also contain various yellowish carotenoids, the blue pigment phycobilin, and in some species, the red pigment phycoerythrin 8. Phycobilins are water-soluble pigments and are therefore found in the cytoplasm, or in the stroma of the chloroplast. They occur only in Cyano-bacteria and Rhodophyta. These bioactive metabolites of cyanobacteria are of special interest in the development of new products for medical, pharmaceutical, cosmetic and food industries.

This biotechnological potential seems to increase in cyanobacterial strains that can tolerate the extreme conditions to partially avoid competition from other, less tolerant organisms. Thus, halotolerant organisms are very attractive candidates for their mass culture in hypersaline or arid environments with great solar radiation; otherwise, it is not useful in normal conditions. The growth of cyanobacteria in aquatic environments could be controlled by a variety of environmental factors like appropriate nutrients, temperature, pH and light conditions that are necessary for their culture. Knowledge of their physiological and biochemical characteristics in laboratory cultures, in a wide range of parameters, not only helps to determine their biotechnological potential but also to determine and interpret in a more efficient way to observe the results of the growth of these microorganisms in their natural environment. Thus, this work will evaluate the pigment production potential of two freshwater, one halotolerant and two marine cyanobacterial strains for commercial exploitation.

The medium constituents were sterilized separately by autoclaving at 121 °C for 15 min and were mixed thoroughly before inoculation. The chemicals used in this study were of reagent grade. All cultures were maintained for 20 days in autoclaved 250 ml conical flasks containing 150 ml of medium, pH 7.5, at 20º ± 2 ºC temperature, and 60 lE m2s1 light intensity with a dark: light cycle of 16:8 h. After 20 days, biomass was harvested by centrifugation at 3000 ×g for 5 min, filtered, dried at 40 ºC for 48 h and analyzed for pigment analysis.

Extraction of Photosynthetic Pigments: For extraction of phycocyanin, one gram of freeze-dried cell biomass was suspended in 100 ml of sodium phosphate buffer (0.1 M, pH 7.0, containing 1 mM sodium azide). Suspended cell biomass was disrupted by sonication for 60 s and repeated freezing at -20 ºC and thawing at room temperature, followed by the further extraction of phycobiliproteins. The mixture was subsequently centrifuged at 10,000g for 30 min at 4 ºC, and a phycobiliprotein containing blue color clear supernatant was collected and used for further analysis according to protocol.

Estimation of Chlorophyll: Growth was measured by extracting total chlorophyll A of the culture. The methanol extracted supernatant was estimated for cellular chlorophyll a by employing the standard extinction coefficient (13.42) for a solution of 1 mg/ml of chlorophyll 13. 2 ml of homogenized algal suspension was taken in a centrifuge tube and done centrifugation at 7000 rpm for 10 min and then discarded the supernatant and transferred the algal pellet to a test tube and added 2 ml of 90% methanol. The contents were shaken and the tubes were placed covered with aluminum foil in a water bath at 60 ºC for 30 min. The absorbance of the supernatant was measured at 665 nm against methanol blank (UV-visible spectrophotometer).

Estimation of Phycobiliproteins: The absorbance of phycobiliprotein containing supernatant was measured in a UV–Vis spectrophotometer at wavelengths 620, 652 and 562 nm for calculating the concentrations of C-PC (C-phycocyanin), APC (Allophycocyanin) and PE (Phycoerythrin) respectively using the following equations.

Separation of Phycocyanin by Ammonium Sulphate Precipitation: Ammonium sulfate was gradually added to 100 ml crude extracts to achieve 25% and 50% saturation with continuous stirring. The resulting solution was kept for 2 h and centrifuged at 12,000 g for 30 min. The obtained blue precipitate was dissolved in 0.005 M Na-phosphate buffer (pH- 7.0) 15. At each extraction step, the C-PC concentration was calculated by the method of Boussiba and Richmond 16 and the purity was calculated by the method of Bennett and Bogorad 17. This pigment was used for further studies.

Growth Analysis of Different Cyanobacterial Species: Growth analysis was done by taking 2 ml of the culture of different cyanobacteria in eppendorf tubes and their O.D were taken at 700 nm in UV Visible spectrophotometer. All cyanobacterial species showed growth and grew luxuriantly in the flasks in laboratory conditions.
The marine species also showed good growth but at a slower rate. These marine species were grown in low light environments. The growth conditions were good due to the proper temperature and light availability. The green color of the cultures represented the growth of cultures where the number of cells increased. The mean values of growth O.D at 16th day were maximum in Anabaena cylindrica, which was 0.361, whereas the slow-growing marine Synechococcus BDUSM -13 mean growth O.D was 0.166 showed in Fig. 1. 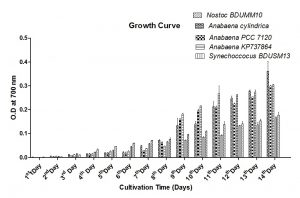 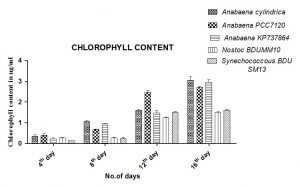 Carotenoid Pigment: The mean values of carotenoids calculated were highest during peak growth stage (i.e. 16th day of incubation) followed by a decline thereafter. There was a marked difference amongst the cyanobacterial strains for this parameter. Anabaena cylindrica showed the highest carotenoid content at 16th day about 0.715 µg/ml and a minimum of 0.011 µg/ml, which was of Synechococcus BDUSM-13 respectively Fig. 3. 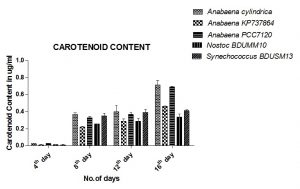 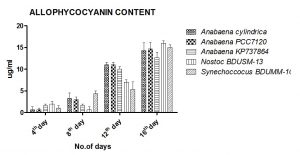 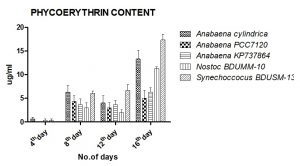 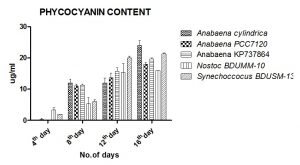 DISCUSSION: In the present time, microalgae are the richest sources of biologically active pigments with the high medicinal property. Amongst these microalgae, gram-negative microorganisms, cyano-bacteria, are unique producer of diverse pigments. These cyanobacteria are also reported to produce the general photosynthetic pigments like chlorophyll-A and β-carotene as in other microalgae, but they are different from microalgae by synthesizing phycobiliproteins which may be one of the biomarkers for cyanobacteria.  From this present study, five different cyanobacterial strains were analyzed for their biomass and phycobili-protein production. All the Anabaena strains (Anabaena PCC7120, Anabaena cylindrica and Anabaena KP787364 found to grow well in media, which was being analyzed by their growth curve and pigment production while Synechoccoccus BDUSM-13 showed slow growth.

Anabaena cylindrica shows maximum growth with absorbance mean value of 0.361 at 700 nm, and Nostoc BDUMM-10 shows an absorbance value of 0.166 at 700 nm. Carotenoid content at 16th day was 0.715 ug/ml was in Anabaena cylindrica and 0.011 µg/ml in Anabaena KP737864. It was interesting to observe that strain Anabaena cylindrica showed the highest phycocyanin (PC) content. Prasanna 18 also observed a wide range (0.11–3.40 μg ml-1) with respect to chlorophyll accumulation in different Anabaena strains. Here the chlorophyll content was highest at about 3.06 µg/ml in Anabaena cylindrica. Prasanna 18 observed differences in the protein and phyco-biliprotein content of Anabaena strains isolated from different geographical locations. The chloro-phyll and carotenoids in the organisms were related to the physiological capability of the cells in the case of cyanobacteria isolated from hyper-saline environments.

The filamentous cyanobacterial forms like Anabaena cylindrica was recorded as maximum phycocyanin, marine Synechococcus BDUSM-13 (17.33 µg/ml) was having highest phycoerythrin. Anabaena KP737864 was reported to acquire more amounts of allophycocyanin (12.66 µg/ml) of phycobiliproteins.

ACKNOWLEDGEMENT: The authors are thankful to the University Grants Commission for providing D. Phil. fellowship for the financial assistance and for their help during the study period.

CONFLICTS OF INTEREST: The authors have declared no conflict of interest.