ABSTRACT: Jivanti is considered a stimulant and tonic in Ayurvedic literature. Its medicinal use dates back to about 4500 to 1600 BC, as mentioned in classical texts. Holostemma ada- kodien and Leptadenia reticulata are the two plants used in Ayurveda as source plants of the drug Jivanti. Roots of these plants are used in several Ayurvedic preparations. Though Ayurvedic Formulary of India mentions Leptadenia reticulata as the source plant of Jivanti, throughout Kerala and mostly in South India, Holostemma ada- kodien is used as source plants of Jivanti and there are reports regarding adulteration in market samples, which will adversely affect the quality of medicines prepared. Till now there is no significant study to compare the source plants available in markets as Jivanti. Present work is a comparative histological, histochemical and phytochemical study of the raw drug Jivanti from different raw drug markets of Kerala. This is a first time approach to develop quality control measures with the help of histological, histochemical and phytochemical tools

INTRODUCTION: Jivanti, the drug is considered to have the property to bestow health and liveliness to the consumer. Caraka treats it as an important rasayana drug, capable of maintaining the youthful vigour and strength. The botanical identity of the drug is highly disputed. Kerala physicians identified Holostemma ada- kodien as Jivanti. The roots of these plants are being used as Jivanti in Kerala. Some authors from north have equated it with Flickingeria nodosa (Dalz.) Sciden f. an orchid 1. Leptadenia reticulata is considered to be a good cure for tuberculosis and eye diseases.

So it is treated as the real Jivanti by some authors 2 and Ayurvedic formulary of India also accepts this plant as the true drug 3. The root is the official part, used for the preparations like Jivantyadi ghrtam, Manasamitravatakam, Balarishtam and Anutailam etc 4. Poisonous affections and tuberculosis are also relieved by the use of the drug 4, 5. The adulteration/ substitution occurs either due to the non availability of genuine drugs in required quantities or due to the ignorance of the correct identity of the genuine drug. From the present study found that majority of the Kerala market samples are Holostemma ada- kodien, the drug source of Jivanti. Morphological features of these plants were reported 5, 6.

Holostemma ada- kodien and Leptadenia reticulata are the two plants used as a source of Jivanti. Both the plants belonging to same family Asclepiadaceae. Trips were conducted to collect the raw drugs from different raw drug markets of Kerala and the materials were subjected to anatomical and chemical comparison using the standard procedure. From this study raw drugs were collected from 12 markets of Kerala (Alappuzha, Calicut, Ernakulam, Idukki, Kollam, Kottayam, Kuttyadi, Malappuram, Palakkad, Thrissur, Vadakara and Wayanad. Roots were fixed in Formalin Acetic acid Alcohol (FAA) mixture for further study. 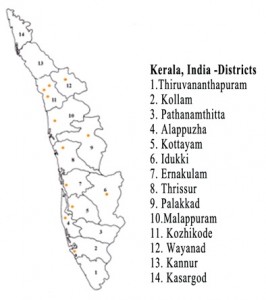 RESULT AND DISCUSSION: Materials collected from 12 markets (Fig. 1) of Kerala and studied their pharmacognostical and phytochemical characters. From the study it is confirmed that all materials except Kollam all materials are H. ada-kodien. Though there is no variation in the basic anatomical characters of H. ada-kodien, anatomical studies of the market samples show differences in the depositions of lignin and starch according to the place of collection. The sample collected from Kollam shows adulteration when compared to anatomical characters of genuine H. ada- kodien (Plate 1).

From the thin layer chromatographic profiles developed for the genuine drug and the market samples it is well clear that except the sample from Kollam all the other samples are the genuine H. ada-kodien for the drug Jivanti. Maximum % was observed in H. ada-kodien collected from Idukki, Kottayam, Vadakara and Waynad area. Among the raw drugs sample collected from Kollam showed additional bands at Rf 0.72. Whereas all other drug showed same Rf values which is detailed in the Table 1 and Table 2. The samples from Kollam may be an adulterant which was not identified (Plate 2). 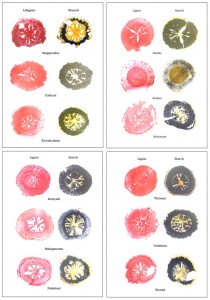 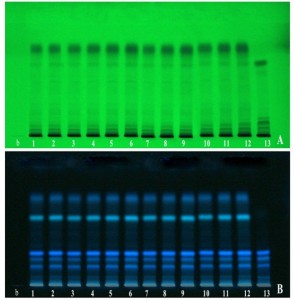 CONCLUSION: To check the extend of variability of source plants of Jivanti from different raw drug markets of Kerala, histological, histochemical and phytochemical studies are used. From the present study it is clear that differences were observed in the depositions of lignin and starch according to the place of collection, but the chemical profiling showed that the compounds are similar but a little difference in their concentrations. From the Kerala market survey it was calculated that about 90% of the raw drug Jivanti were found to be Holostemma ada-kodien, the raw drug sources of Jivanti used in Kerala and 10% were found to be adulterant

ACKNOWLEDGEMENTS: The authors are thankful to KSCSTE, Govt of Kerala for financial support and Arya Vaidya Sala, Kottakkal for extending the facilities.