ABSTRACT: To investigate the content of polar auxin transport inhibitor flavonoid quercetin (Q) and topo-isomerase I-DNA inhibitor alkaloid camptothecin (CPT) from Gracilaria corticata (GC), red seaweed from Surathkal beach, Karnataka a comparative study was carried out. Methods: The content of Q and CPT was quantified in the ethanolic extract of GC using thin layer chromatography (TLC) and high performance liquid chromatography (HPLC). The HPLC analysis resulted in a sharp peak of authentic CPT and Q at the retention time of 2.445 min and 3.540 min respectively. The peaks of ethanolic extract of GC spiked with CPT was found at the retention time of 1.630 min, 1.690 min and 2.000 min and retention time in the ethanolic extract of GC spiked with Q was found to be 1.600 min and 1.713 min. The method developed for this study shall stand appropriate for the quantification of secondary metabolites and screening of flavonoid and alkaloid contents in the seaweeds.

INTRODUCTION: Alkaloids are widely present in natural products particularly in ethnobotanically important plants and marine organisms. They have been of specific interest due to their physiological activities including anticancer, antiviral and antimalarial activities 1. There are a number of antitumor agents having topo-isomerases as their target and they act through different mechanisms such as preventing DNA–topoisomerase binding, inhibiting the cleavage of DNA or stabilizing the topoisomerase–DNA cleavable complex 2 - 4. The topoisomerase I inhibitor is camptothecin (CPT) which is a best characterized, natural compound isolated from the bark of the Chinese tree Camptotheca acuminate 5.

Camptothecin was also found to possess activity against HIV-1 6, HSV-2 7, parasitic Trypanosoma, leishmania 8 and also vital as anticancer drug 9 - 11.  Flavonoids are perhaps best known to enhance the effects of ascorbic acid. They are also known for their ability to protect the vascular system. They serve anti-carcinogenic and cardio-protective functions in humans. However, literature on flavonoid content of seaweeds was scarce 12 - 15, while quercetin is found to drastically reduce the hepatic lipid accumulation 16.

Seaweeds are macrophytic marine algae, both wild and cultivated, growing in saltwater. They are available largely in shallow coastal waters. Seaweeds are widely used as a range of therapeutic possibilities both internally and externally. From the past few decades, there has been an upsurge in the search for new plant-derived drugs. However, marine compounds are under-represented in the current pharmacology boom. It is anticipated that the marine environment will become a valuable source of novel compounds in the near future, as it represents 95% of the biosphere 17. The present study was aimed to determine camptothecin and quercetin content in Red algae Gracilaria corticata (GC). Estimation of quantitative camptothecin using high-performance liquid chromatography is considered to be prevalent method 18. CPT accumulation was evaluated both qualitatively and quantitatively using HPLC 19.

In our preliminary investigation of the crude ethanolic extract of GC, we had observed anticancer effect on HeLa cell lines. However, pharmacological and chemical studies are being continued in order to characterize the mechanism(s) responsible for the anticancer action and also to identify other active principles present in GC. 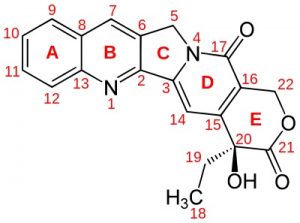 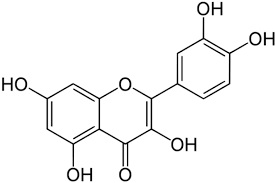 Collection of Seaweed Sample: Seaweeds were collected from the rocks of Surathkal beach (13 00`34.1" N lat. and 74 47`16.1" E long.), Dakshina Kannada district, Karnataka. Collected samples were washed with tap water systematically, to remove epiphytes, debris and other marine organisms, then dehydrated with tissue paper and stored at -20 °C till further analysis. The samples were identified as Gracilaria sp. by Dr. C. R. K Reddy, CSIR-Central Salt and Marine Chemicals Research Institute, Bhavnagar, Gujarat. The collected samples were shade dried and powdered.

Seaweed Extraction: The extraction was done by Soxhlet apparatus sequentially with different solvents of increasing polarity namely: chloroform, acetone, methanol, ethanol and water until the extract was clear. The resulting pasty extracts were stored in a refrigerator at 4 °C for future use. The extracted red algae, G. corticata were used for the study of bioactive compounds and pharmacological studies.

Development of TLC Plate for Phytochemical Studies: Qualitative analysis of presence of active secondary metabolites of the G. corticata by TLC. The solid phase of silica gel was kept back at 100 °C for 20 minutes in hot air oven. Silica powder was blended thoroughly by petroleum ether and made as slurry. TLC glass plates of 20cm x 20cm were cast by slurry and dried for 1 hour at 80 °C in hot air oven. The filtrate was spotted on the plate using capillary tube; various solvent combinations were used as mobile phases based on the phytocompounds 20-21.

Separation of Phenols: The powdered marine algae of Gracilaria corticata were lixiviated using methanol on rotator shaker for 24 hours. For chromatography, the reduced filtrate was cast off. Solvent combination of chloroform and methanol (27:0.3) was used. After scattering, the plates were heated for 10 minutes at 80 °C with Folin-Ciocalteu reagent. The Rf and color of phenols were determined in visible light.

Separation of Alkaloids: The powdered marine algae were partially diluted with ammonium hydroxide and lixiviated with Ethyl acetate at room temperature for 24 hours. The organic part was separated from the filtrate and then with ammonium hydroxide (pH 11-12) basified. Solvent combination of chloroform and methanol (15:1) was used for alkaloid spots separation. Dragendroff’s reagent was sprayed and viewed under ultraviolet light at 254nm and visible light. Rf and colour of these spots was noted.

Separation of Flavonoids: The powdered sample was treated with 10 ml methanol of water both for 5 min at 60 °C. The filtrate was condensed. Combination of water and ethyl acetate (10:1ml) was blended to filter the extracts. For chromatography, the ethyl acetate part retained and used. Chloroform and methanol (19:1) was used as solvent combination, the separated flavonoid spots were viewed under Ultraviolet light at 254nm, Rf and colour of these spots was noted.

Separation of Glycosides: The powdered marine algae were extracted with 70% ethyl alcohol on a rotary shaker for 10 hours, 70% lead acetate was added further to the filtrate and centrifuged at 5000 rpm/10min. Further, supernatant was centrifuged by including 6.3% Sodium bi carbonate at 10,000 rpm for 10 min. The remaining supernatants were dried up, re-dissolved in chloroform and used for chromatography. Ethyl acetate: Water: Methanol (80:10:10) solvent combination was used for separation and viewed under ultraviolet light at UV 254nm. Later light, colour and Rf of the the spots were noted.

High Performance Liquid Chromatography (HPLC): Quantification of Q and CPT was performed according to the method of Fulzele and Satdive 22. 5µl sample was loaded for quantification, 20µl standard and ethanolic sample was loaded for quantification. The alkaloids and flavonoids for ethanolic algae extracts were detected at 366nm and 330 nm respectively by UV detector. The peak areas were recorded. The peak areas corresponding to Q and CPT were integrated by comparison with standard calibration curves.

RESULTS AND DISCUSSION: The preliminary secondary metabolite of G. corticata was evaluated using thin layer chromatography technique (Table 1). The results concluded that this alga is a beneficial one for its biological activity due to the presence of phytochemicals (Fig. a, b, c and d).

The TLC profile of secondary metabolites indicated that phenols were found to be the most abundant in ethanolic G. corticata extracts while flavonoids to be low in G. corticata. 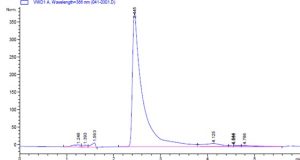 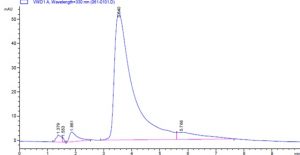 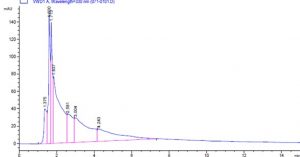 The LC-MS analysis on the extracts of P. tetrastromatica, C. racemosa and T. ornata have also shown high levels of antioxidants with free radical scavenging ability with comparison with the reference compounds (pure flavonoids, quercetin and rutin) 23. Higher content of flavonoids in seaweeds were also reported from other places 24-25. The flavonoid content of Ulva lactuca and Sargassum whitii and Enteromorpha spirulina was reported to be relatively low.

CONCLUSION: This study revealed that the ethanolic extracts of marine alga G. corticata may lead to useful evaluation of flavonoids and alkaloids from marine plant resources which can be used in treatment of multiple disease categories. Furthermore, they may remain best sources of bioactive compounds. The results showed presence of various phytochemicals. Thus, these marine algae and their bioactive compounds might be a functional lead for development in pharmaceuticals. However, further studies are to be carried out with biological actives in near future.

ACKNOWLEDGEMENT: Authors are grateful to Mangalore University for the support and encouragement.