This study is aimed to assess the bioequivalence of five generic ciprofloxacin tablets from different manufacturer using in vitro dissolution study under biowaiver conditions by RP-HPLC. Dissolution media were USP buffer solutions at pH 1.2 (hydrochloric acid solution), pH 4.5 (acetate buffer solution), and pH 6.8 (phosphate buffer solution). Other general quality assessment tests of these tablets like weight variation, hardness, friability, disintegration time and assay were also determined according to established methods. All brands complied with the official specification for uniformity of weight, friability and disintegration time. Assay of selected tablets revealed that all samples contained over 99% (w/w) of labeled chemical content. The dissolution profiles showed no significant inter brand and intra brand variability. Dissolution results of all the tablet formulations and the innovator brand were further analyzed with difference factor (f1), similarity factor (f2), dissolution efficiency and dunnet,s test. These results indicated that all generic ciprofloxacin tablets included in this investigation were bioequivalent with the chosen innovator brand and so may be used interchangeably

INTRODUCTION: The process of dissolution plays a vital role in liberation a drug from its dosage form and making it available for subsequent gastrointestinal absorption.

So, dissolution analysis of pharmaceutical solid dosage forms is a very important test of product quality and it can be used as a sensitive method for differentiating between formulations of the same therapeutic agent 1-2.

Dissolution of a drug from its dosage from is dependent on many factors, which include not only the physicochemical properties of the drug, but also the formulation of the dosage form and the process of manufacturing 3. So, constant dissolution analysis of marketed drug products is essential to ensure availability of quality medicines.

Both branded versions and generic products of ciprofloxacin tablets are available in Bangladesh market but people like to use generic products as they are far cheaper than its branded versions. Generic products can only be substituted with the branded version if they are bioequivalent with the innovator band. A product is considered  bioequivalent  with  innovator brand when it contains identical amounts of the same active ingredient in  the  same  dose  formulation  and  there is no difference in the availability at the  site  of  drug  action when they are administered at the equal molar dose under similar conditions.

Materials: Ciprofloxacin Hydrochloride was kindly gifted by Incepta Pharmaceuticals Ltd, Bangladesh. Acetonitrile and methanol were of HPLC grade and were purchased from E. Merck, Darmstadt, Germany. Ammonium acetate, acetic acid and other reagents were of analytical-reagent grade and purchased from E. Merck, Darmstadt, Germany. Water was deionised and double distilled.  Five brands of ciprofloxacin tablets were purchased from local drug shops in Dhaka city. The samples were properly checked for their manufacturing license numbers, batch numbers, and production and expiry dates. They were randomly coded as A to E and stored properly. The labels of all the products claimed to contain 500 mg of the active ingredient per tablet.

HPLC Analysis of Ciprofloxacin: A simple, selective and rapid reversed phase High Performance Liquid Chromatographic (RP-HPLC) method has been developed and validated for quantification of ciprofloxacin. The chromatographic system consisted of a LC-20 AT pump, SPD-20 A UV/visible detector (Shimadzu, Japan). The Separation was achieved from C18 column ( 5μ, 4.6 X 150 mm, Waters, USA)  at 300C temperature with a mobile phase consisting of Buffer (0.025 M orthophoshoric acid): Methanol: Acetronitrile: (ratio:50:15:35) at a flow rate of 1.5 ml/min.

The drug analysis data were acquired and processed using LC solution (Version 1.2, Shimadzu, Japan) software running under Windows XP on a Pentium PC. The method was validated for the parameters like system suitability, selectivity, linearity, accuracy, precision and robustness. The retention time was about 1.605 minutes both for standard solution and sample solution (Figure 1). Similar retention time proves the selectivity of the method. The calibration curves were linear over the concentration range of 80% to 120% (R2 > 0.999). The proposed method is accurate with 100.165% recovery, precise (% RSD < 0.5) and robust. 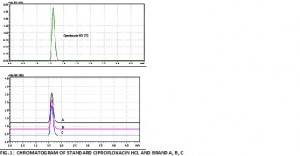 FIG. 1:  CHROMATOGRAM OF STANDARD CIPROFLOXACIN HCL AND BRAND A, B, C

Assay: 20 tablets were crushed in a motor pestle. Powdered tablets containing of 2 g of ciprofloxacin was dissolved in 750 ml of the mobile phase, mixed with the aid of ultrasound for 20 minutes and diluted to produce 1000 ml. A portion of the resulting suspension was filtered and the filtrate was diluted with sufficient mobile phase to produce a solution containing the equivalent of 0.05% w/v of ciprofloxacin.  10µl solution was injected in the HPLC and potency was calculated from the calibration curve constructed previously.

Determination of uniformity of weight: 20 tablets from each of the 5 brands were weighed individually with an analytical weighing balance (Model: AY-200, SHIMADZU Corporation, Japan). The average weights for each brand as well as the percentage deviation from the mean value were calculated.

Hardness test: Automatic Tablet Hardness Tester (8M, Dr. Schleuniger, Switzerland) was used to determine the crushing strength. 6 tablets were randomly selected from each brand and the pressure at which each tablet crushed was recorded.

Friability test: 20 tablets of each brand were weighed and subjected to abrasion by employing a Veego friabilator (VFT-2, India) at 25 rev/min for 4 min. The tablets were then weighed and compared with their initial weights and percentage friability was obtained.

Disintegration test: 6 tablets from each brand were employed for the test in distilled water at 37°C using Tablet Disintegration Tester (Model: VDT-2, Veego, India). The time required for disintegrating the tablet and passing completely through the sieve was recorded.

In all the experiments, 5 ml of dissolution sample was withdrawn at 0, 5, 10, 15, 30, and 45 min and replaced with equal volume to maintain sink condition. Samples were filtered and assayed by validated HPLC method. The concentration of each sample was determined from a calibration curve obtained from pure samples of ciprofloxacin.

Data Analysis: The uniformity of weight was analyzed with simple statistics – percentage deviation while the dissolution profiles were analyzed with difference factor (f1), similarity factor (f2) and some other approaches such as dissolution efficiency and Dunnett’s test.

RESULTS AND DISCUSSION: A summary of the results of uniformity of weight, hardness, friability, disintegration and assay are shown in Table 1. Uniformity of weight may serve as a pointer to amount of the active pharmaceutical ingredient (API) contained in the formulation.

All the brands complied with the compendial specification for uniformity of weight which states that for tablets weighing more than 324 mg, not more than 2 tablets should differ from the average weight by 5% or more none will deviate 10% of average weight. Highest deviation was found 2.12% in case of brand C.

Hardness is referred to as non-compendial test. The hardness or crushing strength assesses the ability of tablets to withstand handling without fracturing or chipping. It can also influence other parameters such as friability and disintegration.

Brand B required the least pressure (94.67 N). A force of about 40 N is the minimum requirement for a satisfactory tablet 13. Hence, the tablets of all brands were satisfactory for hardness.

Friability test is used to evaluate the tablets resistance to abrasion. Friability is now included in the United States Pharmacopeia (USP, 1995) as a compendia test. The compendial specification for friability is 1%. Friability for all the brands was below 1%.

The results of dissolution studies are graphically represented in Figure 2 - 4. All dissolution data are based on the actual drug content of the test tablets as calculated from the assay results. Drug release from innovator brand was found a slight higher in all the dissolution media. All the brands released about 80% drug in acidic media (pH 1.2) within 30 min. Higher amount of drug was released in acetate buffer medium (pH 4.5) from all the brands. But opposite scenario was observed in case of Phosphate buffer (pH 6.8). Only 37.17% ciprofloxacin was released from brand C within 45 min and lowest drug release was 32.17% from brand Band D in this medium within 45 min. This is due to the pH depended solubility of ciprofloxacin.

Ciprofloxacin exhibits a ‘‘U’’ shaped pH-solubility profile, with high solubility at pH values below 5 and above 10, and minimum solubility near the isoelectric point, which is close to neutral14. 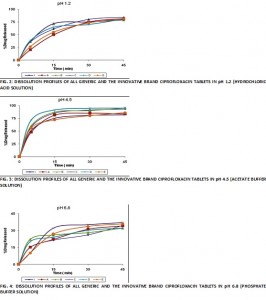 Ciprofloxacin is highly soluble at pH 1.2 and 4.5. So, higher dissolution was obtained in these two media. Ciprofloxacin has limited solubility at pH 6.8 (< .02mg/ml). So, 37.17% dissolution is justified in case of Phosphate buffer medium (pH 6.8).

Similarity factor f2 has been adopted by FDA and the European Agency for the Evaluation of Medicinal Products (EMEA) by the Committee for Proprietary Medicinal Products (CPMP) as a criterion to compare the similarity of two or more dissolution profiles. Similarity factor f2 is included by the Centre for Drug Evaluation and Research (CDER) in their guidelines such as guidance on dissolution testing of immediate release solid oral dosage forms (FDA, 1997) and guidance on Waiver of In-Vivo Bioavailability and Bioequivalence Studies for Immediate Release Solid Oral Dosage Forms Based on a Biopharmaceutics Classification System (FDA, 2000) 15-16. Two dissolution profiles to be considered similar and bioequivalent, f1 should be between 0 and 15 while f2 should be between 50 and 100 (FDA, 1997).

Table 2 shows the f1, f2 values of different brands in respect of chosen innovator brand. In f2 calculation only one measurement is generally considered after the comparator product has reached 85 % dissolution. F1 and f2 values are calculated for dissolution data obtained from two medium (pH 1.2 and 4.5). f1 and f2 are not calculated for phosphate buffer medium as maximum drug release was only 37.17%. All the values for f2 are more than 50 and all the f1 values are less than 15. So, we can say that all the brands are equivalent with the innovator band.

Difference factor f1 and similarity factor f2 are not applicable for dissolution data obtained from phosphate buffer (pH 6.8) due to lower drug release. So, we compare the mean dissolution at 45min by dunnett’s test. Pair wise comparisons of brands A, B, C, D, and E against innovator brand (I) were performed by multiple comparisons using Dunnett’s test and the outcome at 0.05 level is as shown in Table 3. Values above the critical value (3.61) indicate that the mean % dissolved difference is significant while values below the critical value indicate that the difference is not significant. It can be seen that all the brands are not significantly different from innovator brand (I) at 45 min point.

Where y is the percentage dissolved at time t.

CONCLUSION: Our results indicated that all generic ciprofloxacin tablets included in this study seem to have very good bioavailability. All of them comply with BP and USP specifications. They can be considered bioequivalent with the chosen innovator brand. However in vivo test may be required for final comments regarding the quality of marketed brands of ciprofloxacin.