ABSTRACT: In this study, homology modeling and molecular docking studies were performed to explore structural features and binding mechanism of synthesized benzimidazole derivatives as ubiquitin inhibitors. A homology modeling procedure was employed to construct a 3D model of ubiquitin protein by using MODELLER9.15. For this procedure, the X-ray crystal structure of Gumby / fam105b in Complex with linear Di-ubiquitin (PDB ID: 4KSL) at 2.83 Å resolution was used as template. The predicted model was analyzed by PROCHECK. The 3D structure of predicted model shows 93.9% of amino acids in most favored region. The predicted model was used for molecular docking studies by using Autodock4.2. All the synthesized benzimidazole derivatives show good binding energy and interactions with the model. Compound one shows three interactions with Asp348, Leu297 and Tyr351.

Activation enzyme of Ubiquitin E1 activates the 76-amino acid residue ubiquitin polypeptide by forming a thioester bond. The thioester bond forms in between its catalytic cysteine and the C terminus of ubiquitin in an ATP-dependent manner. 4 Through a transthiolation reaction ubiquitin is transferred to the activate site cysteine in ubiquitin-conjugating enzyme E2. In eukaryotes it is highly conserved but absent in bacteria. In the fused heterocyclic moieties benzimidazole nucleus plays an important pharmacophore with unique chemical and biological properties.5-8 They have been found to possess various biological activities like analgesic, antihistaminic, anti-inflammatory, antispasmodic, analgesic, antimicrobial, antitumor, antiproliferative, anti-HIV-RT, antiulcer, anti-tubercular, anti-cancer and anti-fungal 9-12 anti-inflammatory 13, proton pump inhibitors 14, 15 and cycloxygenase inhibitor activities.16-20 Some of the benzimidazole derivatives are involved in medicinal treatment such as infertility, epilepsy and diabetic deseases.21, 22

The amino acid sequence of Homosapiens Inactive ubiquitin thioesterase FAM105A (Accession No.Q9NUU6) was retrieved from the Uni Prot KB database (http://www.uniprot.org/) 23. A BLAST 24 (Basic Local Alignment Search Tool) search was performed to select the template and resulted with the best match Crystal Structure of Gumby/fam105b In Complex With Linear Di-ubiquitin (PDB ID: 4KSL (Chain A)) (http://blast.ncbi.nlm.nih.gov/Blast.cgi) with 41% similarity having a resolution of 2.83 Å making it an excellent template. The three dimensional structure was generated using Modeller 9.15 25. The final validation of the model was performed using PROCHECK for Ramachandran plot. The RMSD (root mean square deviation) was calculated by superimposing (4KSL) over the generated model to access the accuracy and reliability of the generated model using SPDBV 26 by selecting the main chain atom (i.e. the backbone atoms of alpha carbon).

MODELLER 9.15 was then used to gain satisfactory models; an automated approach to homology modeling by satisfaction of spatial restrains 27.  Initially, both the query and template were aligned by using clustal X. After  manually  modifying  the alignment  input  file  in  MODELLER  9.15  to  match  the  query and template sequence, 20 models  were  generated. After generating files least modeler objective function value containing PDB was selected to validate the model.  These  models were  then  checked  in  detail  for  the  protein  structure  stereochemistry  by  using PROCHECK 28, which generates Ramachandran plot and comprehensive residue by residue listing facilitates, the in depth assessment of Psi/Phi angles and the backbone conformation of the models.

The five synthesized Benzimidazole derivatives were sketched in sybyl6.7 and saved it into .mol2 format. Then the molecules were minimized using Tripos force field, Gasteiger-Huckel charges were added and used convergence criterion of 0.005 kcal/mol Å. Molecular Docking study was performed to all the synthesized molecules separately by using AutoDock4.2 program, using the Lamarckian Genetic Algorithm (LGA) and implemented empirical free energy function.29 Initially, the modelled protein was loaded and polar hydrogen were added. The molecule was loaded and set conformations and saved it in PDBQT format and then saved generated PDB file to PDBQT format. The grid maps were selected and calculated using AutoGrid.30 For all dockings, a grid map with 60×60×60 points and also used a grid-point spacing of 0.375 Å was applied. Coordinates of x, y, z was set as -42.267, 33.699, and 12.982 respectively. For all docking parameters, default values were used. 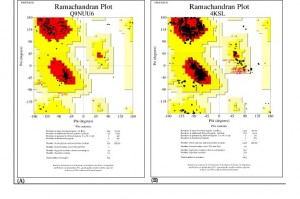 FIG. 1: RAMACHANDRAN PLOT ANALYSIS OF THE BACKBONE DIHEDRAL ANGLES PSI (Ψ) AND PHI (ɸ) OF (A) THE GENERATED MODEL AND (B) THE TEMPLATE MODEL 4KSL CHAIN A. 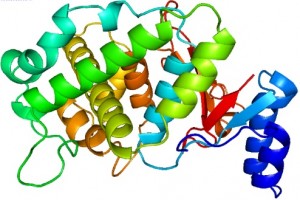 Molecular docking is the most widely used method for the calculation of protein–ligand interactions. Docking is a most efficient technique to predict thepotential ligand binding sites on the whole protein. To explore the predictability as well as the characteristics of the binding pocket of the modelled model and to make the rational design of novel and more selective antagonists of Inactive ubiquitin thioesterase FAM105A. Molecular docking was carried out on developed Inactive ubiquitin thioesterase FAM105A binding pocket using a set of Inactive ubiquitin thioesterase FAM105A antagonists shown in Table 1. The 10 docking conformations for each molecule were generated. Autodock4.2 also uses free energy binding assessment to assign the best binding conformation. Energies estimated by Autodock are described by intermolecular energy (including Vander Waals, hydrogen bonding, and electrostatic energies), internal energy, and torsional free energy.

The hydrogen bond interaction and electrostatic interaction between the receptor and ligand is the most important, because it can allocate the strength of binding and the exact position of the ligand in the active site. Structures of molecules are given in Table 1. 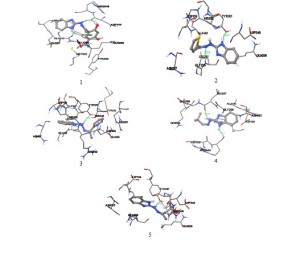 FIG. 3: DOCKING POSE OF THE COMPOUNDS 1-5 IN THE ACTIVE SITE OF INACTIVE UBIQUITIN THIOESTERASE FAM105A

Molecular docking studies were carried out for five synthesized Benzimidazole derivatives against Inactive ubiquitin thioesterase FAM105A.  The  binding energy,  inhibition  constant,  hydrogen  bond  forming  residues  and interacting  residues  of  all the five synthesized derivatives when docked with Inactive ubiquitin thioesterase FAM105A is  as  given  in  Table  2.  The binding energy for all the molecules range from -5.17 to -7.34kcal/mol. Compound Three having highest binding energy of -7.34kcal/mol. This compound had shown only one interaction with Tyr351 as shown in Fig. 3 thus indicating that Inactive ubiquitin thioesterase FAM105A has lowest affinity towards compound three.  Compound one shows three interactions and compound two and four interacts with Leu297 and Tyr351 and Leu297 and Arg349 respectively. Compound 3 and compound 5 interacts with Tyr351.

CONCLUSION: We had synthesized Benzimidazole derivatives in present study and evaluated for ubiquitone inhibition. The 3D structure of Q9NUU6 of Human was generated using Modeller 9.15. The generated model assessment was revealed that the model is reliable and a quality model with stable energies. Additionally the molecular docking studies were performed to all the compounds into the binding cavity of Q9NUU6, which showed favourable interactions with all the compounds. Third compound shows highest binding energy of -7.34 kcal/mol. except fourth compound all the other compounds shows two interactions. Hence we conclude that all these synthesized compounds could be a potential lead molecules for inhibiting ubiquitin thioesterase.