ABSTRACT: Cytochrome c oxidase, a mitochondrial metalloenzyme acting as the terminal enzyme of the mitochondrial respiratory chain. It provides a critical function in cellular respiration in both eukaryotes and prokaryotes. The recent development in technology has enabled researchers to understand the genetic, molecular, structural, and functional properties of proteins to identify appropriate targets against diseases, and as a result, many anti-inflammatory and anti-proliferative drugs have been developed. In the absence of X-ray and NMR protein crystal structure, homology modeling provides a useful 3D model for a protein that is related to at least one known protein structure. In the present study, the 3D molecular structures of nine Cytochrome c oxidase subunit 1 protein from different species such as Myxine glutinosa, Struthio camelus, Sus scrofa, Homo sapiens, Xenopus laevis, Halichoerus grypus, Zygogeomys trichopus, Buteo buteo, and Plasmodium falciparum were predicted using homology modeling software MODDLLER. The modeled structures were docked using Autodock4.2 software with ten different natural compounds and three drugs as a control to study the molecular interactions of these compounds with the coat protein. The results show that all the compounds exhibited good interactions with modeled proteins.

Three subunits I, II, and III are mitochondrially encoded and are present in all eukaryotes. The enzyme catalyzes 4-electron reduction of O2 to H2O 7. In eukaryotes, the enzyme Cytochrome c oxidase is encoded in two genomes.

These three subunits I, II, and III have been isolated and sequenced from fungus, yeast and mammalian sources 8 and for plants 9-12. Hence, the aim of the present study is to build a three-dimensional structure of nine different important Cytochrome c oxidase subunit 1 protein from different species by using homology modeling.

To find related protein templates in order to build models for these primary sequences, a sequence similarity search has been carried out separately by using Protein BLAST 14 tool against solved protein structures deposited in Protein Data Bank (PDB). ClustalX and ClustalW2 are used for the correction of alignment 15. Modeller9.21 16 was used to gain satisfactory models 17. The modeller is an implementation of an automated approach to comparative modeling by satisfaction of spatial restraints, which employs position-dependent gap penalties based on structural information of the template for generating alignments 18.

After manually modifying the alignment input file in MODELLER 9.21 to match the template and query sequence, 20 models were generated and selected the PDB file on the basis of the Modeller Objective Function. The selected model was subjected to a series of tests for its internal consistency and reliability. Backbone conformation was evaluated by the inspection of the psi/phi Ramachandran plot obtained from PROCHECK analysis 19.

Active Site Prediction: The active site for docking was predicted using the Tripos Sybyl6.7 SiteID 20 module after adding hydrogen atoms to the modeled proteins. The amino acids fall under active site for all the modeled proteins are shown in Table 2. The potential binding sites were predicted and identified by the SiteID module by correlating and combining key criteria such as depth, exposure, temperature factor, hydrophobicity, solvent accessible surface, and hydrogen-bonding capability. While detecting the potential binding sites, the SiteID module generates necessary files required for performing Autodock4.2 docking studies.

Docking Studies: Molecular docking studies were performed to elucidate the binding mode of COX proteins and the ligands. A total of ten molecules were docked to the protein to locate the appropriate binding orientations and conformations of various inhibitors in the binding pocket using the Graphical User Interface program “Autodock4.2”. 21 Auto Dock 4.2 is an automatic docking tool designed to predict how small molecules bind to a receptor of 3D structures, which generates grids and calculates the docking score to evaluate the conformers. Gasteiger - Huckel united atom charges, polar hydrogen’s and solvation parameters were added to the receptor for the preparation of protein in docking simulation, Gasteiger - Huckel charges assigned and then non-polar hydrogens were merged as the docking ligands were not peptides. All torsions were allowed to rotate during docking. The generation of PDBQT files for protein and ligands preparation, grid box creation, was carried out with Auto Dock Tools 1.5.6 (ADT) 22. AutoDock saved the prepared ligand file and the PDB file in PDBQT format. Generated AutoGrid was used for the preparation of the grid map using a grid box. The grid size was set to 60 × 60 × 60 XYZ points, and the grid center was designated at dimensions (x, y and z). In Autodock, both the protein and ligands are considered as rigid. The binding poses with the lowest docked energy belonging to the top-ranked cluster were selected as the final model for post-docking analysis.

Homology Modelling of Proteins: After protein BLAST of the primary sequences of COX proteins with the predetermined structures deposited in PDB bank, sequences that showed the greatest similarity were considered as template sequences. Twenty models were generated using the MODELLER 9.21 program based on the sequence alignment files generated by the ClustalX program. The alignment file was tweaked manually to best fit the sequences. Among the generated models for all the primary sequences, the model with the least object function was selected for further evaluation for protein stereochemistry (phi and psi angles) with PROCHECK software. The final models were validated using PROCHECK. The PROCHECK software generates a number of files that list complete residue by residue data and the assessment of the overall quality of generated structure compared to well-refined structures of the same resolution.

Docking Studies of Modeled Proteins: The active site for docking was predicted using the Tripos Sybyl 6.7 SiteID module, and the active site is shown in Table 2. During the docking procedure, selected only the best fit, active site pocket with respect to the ligands in order to dock them. AutoDock 4.2 was used for molecular docking studies. Results obtained from AutoDock 4.2 provided information on the binding orientation of ligand-receptor interactions. Free energies of binding (ΔGb) and dissociation constants (Ki) as calculated by AutoDock4.2. The modeled protein was docked with natural compounds consisting of Plant compounds like flavonoids, phenolic compounds, alkaloids, etc. The docking programs place both the ligand and protein molecule in various orientations, conformational positions, and the lowest energy confirmations, which are energetically favorable are evaluated and analyzed for interactions. All the ten molecules that were docked showed good interactions.

From the docking simulation, we observed the free energy charge of binding for the protein-ligand complex. A possible explanation may be that the radio-graphical structure of the protein from crystals differs from that of the aqueous system. The total energy was calculated for all the compounds against different targets are summarized in Table 3-11. Therefore, it can be concluded that the interaction of all the compounds with the corresponding targets is hydrophobic interactions in nature. Molecular docking indicated that the distance of hydrogen bonding between the ligand and the protein, respectively.

Molecular interaction between Cycloartocarpin A with different targets calculated the docking score. The modeled protein was used for molecular docking analysis. It was found that Cycloartocarpin A made a hydrogen bond with Gly355 with binding energy of -10.27 kcal/mol a P00395-Homo sapiens Cytochrome c oxidase subunit 1 protein. The compound also showed best interactions with Trp127 and Arg439 with binding energy of -10.49 kcal/mol an O21399-Struthio camelus protein. 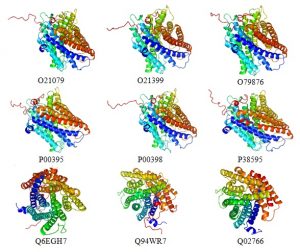 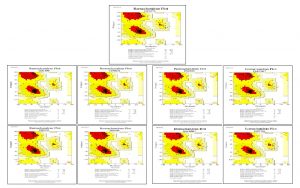 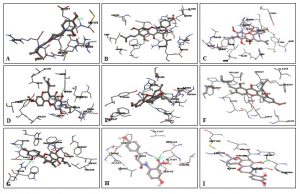 CONCLUSION: In the present study, the stable three-dimensional models were constructed for Cytochrome c oxidase protein from nine different species and further used for molecular docking with the natural inhibitors. Molecular docking results revealed some important amino-acid residues in the active sites of Cytochrome c oxidase protein, which play a key role in the maintenance of their conformation and are directly associated with substrate binding. The interactions between the ligands and the binding sites of Cytochrome c oxidase protein shown in the present study are useful for the understanding of the binding mechanisms of inhibitors and active site information of these proteins. The use of combinatorial approaches may result in the rapid development of better anti-inflammatory and anti-proliferative in future. Successful docking methods search high-dimensional spaces effectively and use a scoring function that correctly ranks candidate dockings. Molecular docking studies of the above compounds showed favorable interactions in the binding site of the modeled COX proteins. Therefore, it is concluded that these molecules are the potential candidates for cytochrome c oxidase inhibitors.