ABSTRACT: Paracetamol tablets are popular over the counter (OTC) products among the patients as a good analgesics and antipyretics. The objective of this study was to compare the quality of the paracetamol tablet formulations those are locally available in Trinidad & Tobago pharmaceutical market manufactured by various pharmaceutical companies with pharmacopoeia standards. The four popular brands (A, B, C, D) of paracetamol conventional tablet of 500 mg strength were chosen. The paracetamol tablets were obtained from government hospital pharmacies as well as from local private pharmacies.  To compare the quality of tablet formulations of different brands various official parameters like friability, weight variation, disintegration time, dissolution and drug assay tests were performed as per the pharmacopoeia.  The result of all these parameters of different brands were in the pharmacopoeial limits so it could be concluded that marketed pharmaceutical tablets of paracetamol of these brands are safe, effective and efficacious as well as satisfy quality control limits of pharmacopoeia.

INTRODUCTION: Pracetamol or acetaminophen is a non-steroidal anti-inflammatory drug (NSAID) available as OTC commonly used as analgesic and antipyretic in the management fever and as well provide relief from mild to moderate pain. Paracetamol (acetaminophen) has weak anti-inflammatory effects since it has poor ability to inhibit cyclooxygenase (COX) in the presence of high concentration of peroxides, as are found at sites of inflammation. Chemically paracetamol is 4-hydroxy acetanilide

For the conventional tablets weight variation, friability, disintegration, dissolution, drug assay, uniformity of contents are the evaluation test those are required to perform to confirm about the quality of tablet.

Friability is the tested for a tablet to see whether the tablet is stable to abrasion or not, it is tested by using Roche friabilator and 1% maximum loss in the weight after friability test is allowed.

Weight variation test is performed to check that the manufactured tablets have a uniform weight. As per USP following limit for the tablets (Table 1)

Disintegration test is performed to see how much time a tablet takes to break down in to the small particles as this is first step before the drug dissolution in the body. The condition of this test should be same like in the body as this is the part of In-vivo-In-vitro correlation.

For weighing ADAM AFA-120 LC balance was used. To measure the pH of solutions OAKTON pH meter was used, Maxi Mix –II was used for mixing purpose, Electrolab EF-2 was used for friability testing, Electolab ED-2L was used for disintegration process, Electolab EDT- 08Lx was used for the dissolution study and for UV-Visible spectrophotometer analysis Agilent 8453 instrument was used.

The different brands of paracetamol tablets those are available in the Trinidad local market were given their code A, B, C, D.

Weight variation test: The purpose of this test is to verify the uniformity of each batch which ultimately reflect the drug content uniformity in all the formulation batches. The test was performed as per the official procedure, 20 tablets were randomly selected and weighed individually and also average was calculated. The difference between average and individual was calculated, further % weight variation was calculated and compare with the USP limits.5, 7

Friability test 7-9:  This test is usually performed to check possible wear and tear loss in the tablet during the transportation and this is closely related to tablet hardness. It is usually performed in the Roche Friabilator. Randomly 10 tablets were selected and their initial weight ( W1) was recorded and after that these weighed 10 tablets were placed in the friabilator and the friabilator was operated for four minutes at 25 rpm speed and 100 revolutions, the tablets were weighed again (W2) and the percent loss (Friability) was then calculated by using following formula

The official permissible limit for friability is 1%.

Dissolution test: Dissolution test is close proximate to the bioavailability this is the reason it is required to perform to confirm drug release pattern of the dosage form as well as efficacy of dosage form. This test is the part of In-vitro-In-vivo correlation so all the parameters of this test was set as per the In-vivo condition of human body. The dissolution test was performed by using Dissolution Tester-USP (Electrolab EDT- 08Lx) of type 2. To determine drug release 900 ml of phosphate buffer, pH 5.4 was used as dissolution medium. The 5, 10, 15, 30, 45, 60 minutes were set as a sampling time. The dissolution medium was heated up to 37±0.5°C by an auto heater. One tablet was put into all six baskets and stirred immediately at 50 revolutions per minute (rpm). After specified time intervals the 5 ml solution was withdrawn, diluted it with fresh solvent and the amount of dissolved Paracetamol was determined from UV-Visible spectrophotomter (Agilant 8453)by taking absorbance at the wavelength of maximum absorbance at about 243 nm in comparison with a standard Paracetamol solution in the same medium ( Phosphate buffer pH 5.8). By measuring the absorbance, the percentage (%) of drug release was calculated.9, 11, 12

This is required to confirm that the labelled amount of drug is available in the given dosage form. To perform this test twenty paracetamol tablets were selected randomly and crushed them in the mortar and powder was made. The equivalent powder containing about 0.15 g drug was taken in the beaker and dissolved in 100 mL of water. The mixture was made uniform by the help of Maxi Mix-II instrument. About 0.1 mL solution was taken, diluted it upto 10 mL and absorbance at the wavelength of maximum absorbance at about 243 nm by measured by the help of UV-Visible spectrophotomter. The available amount was calculated by using the standard calibration curve.7, 9, 12, 13

RESULT AND DISCUSSION: After the randomly selection of tablets the weight variation, friability, drug assay, disintegration and dissolution test were performed as per the United States Pharmacopoeial procedures. The result of weight variation of twenty randomly selected tablets are given in Table 2 and Fig. 2.

As per the USP the weight variation limit for the tablet which is having the weight equal or more than 324 mg is 5 % and the given results shown that all the twenty randomly selected tablets of all four brands are having weight variation less than 5 % which proves that the four brands (A, B, C, D) of paracetamol tablets those are available in the Trinidad pharmaceutical market passed the official weight variation test. The friability test was conducted in Roche friabilator by using 10 tablets, the results of all different brands are given in the Table 3 and Fig. 3.

The results of friability test 7, 9 shows that all the four brands of paracetamol tablets are under the pharmacopoeia limits ( 1%) means all these brands of paracetamol tablets those are available in Trinidad pharmaceutical market are having good strength and can tolerate the shocks during transportation handling of these tablets. The disintegration test 7, 9 was performed in the distilled water at 37 ±2°C in the Electrolab ED-2L instrument. The results of all four brands are given in Table 4 and Fig. 4. 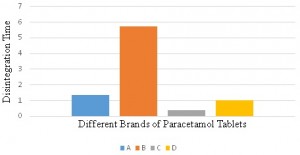 To confirm the amount of paracetamol drug in the tablet drug assay was performed for all four different brands, the results are given in the Table 5 and Fig.5.

The results of drug assay of four different brands of paracetamol tablets shows that amount of paracetamol drug available in all these formulation is near to 100 % means drug are available as per their stated value and the dosage form is in stable form. Out of all these brands the brands D is having highest amount as compare to others but it is in therapeutic window so no chance of under and over pharmacological action. The dissolution study was performed to see the drug release pattern in the four different brands of paracetamol tablets. The dissolution data of multipoint study are given in Table 6 and Fig. 6. 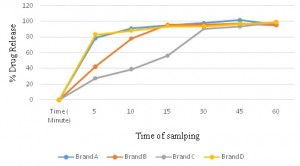 CONCLUSION: The quality control evaluations of four different brands of paracetamol tablets those are available in pharmaceutical market of Trinidad were assessed by this study. The values were compared with the standards. This study showed that all four brands (A, B, C, D) of paracetamol tablets meet the pharmacopoeia specification of different parameters. The results of various quality control parameters for tablets like weight variation, friability, disintegration time, drug assay and dissolution study all are in the pharmacopoeia limits.

ACKNOWLEDGEMENT: Authors are thankful to The University of the West Indies, St. Augustine Trinidad & Tobago for providing funding under the campus research and publication fund.