ABSTRACT:According to classical texts Paederia foetida is used as the genuine source plant of the drug Prasarini, it posses properties like astringent, aphrodisiac, laxative, bitter etc. In Ayurvedic practitioners Merremia tridentata ssp. tridentata and Merremia tridentata ssp. hastata are used as the source plant of this drug. However no conclusive pharmacognostic study of these plants has been performed yet. The present investigation deals with the comparative study of morphological, anatomical, histochemical and phytochemical characters of these three plants. Three plants show similarities and differences between them at morphological, anatomical, histochemical and phytochemical levels. Anatomically these three plants show differences in many characters. But phytochemical studies revealed that these plants show much similarity.b- sitosterol was present in all the three plants but their concentrations shows differences. The parameters used in this study will help to identify the genuine and substitute source plants of the drug prasarini for the preparation of ayurvedic medicines and to ensure the quality of formulations.

INTRODUCTION: The term prasarini indicates the spreading habit of the plant. It also indicates the property of the drug of stretching out parts of the body contracted by paralysis. It is an important ingredient of many Ayurvedic formulations like prasaranyadi kasayam, prasaranyadi tailam, balaristam etc. Several authors have equated this drug with Paederia foetida L. of Rubiaceae. This is probably the plant used as the drug source in North India.

According to Ayurvedic Pharmacopoeia of India this is the accepted source. In Kerala however the source of this drug is an altogether different plant Merremia tridentata of convolvulaceae. There are two subspecies of this species, viz. ssp. tridentata and ssp. hastata, which can easily be recognised by their foliar characters 1.

Comparative Pharmacognostic and Phytochemical studies are the reliable source to identify the genuine raw drug from their substitutes and adulterants.

High Pressure Liquid Chromatography: The Shimadzu HPLC system (Kyoto, Japan) consisting of LC - 10ATVP pump, a rheodyne injector, SPD M10AVP photodiode array detector and CLASS-VP 6.12 SP5 integration software was used for the analysis. Stock solutions of b-sitosterol (Sigma-Aldrich, Germany) were prepared in methanol (analytical grade; Hayman Ltd, England) at 100µg/Ml is used as the standard solution. The stationary phase was Phenomenex Luna C 18 (2) (250 x 4.6mm) column with 5μ particle size with a C18 guard column (Phenomenex, 4mmX2.0mm ID). The mobile phase consisting of Methanol (HPLC grade, Merck) and water in the proportion (25:75 v/v) was used. The mobile phase was degassed by sonication before use. The column was equilibrated with the mobile phase for an hour and then pumped at the rate of 1.0 ml/min. Plant Histological and histochemical staining was carried out according to Johansen2. Photomicrographs were taken using Canon G3 camera attached to Zeiss microscope. For examining the cell structure in powder form, material were powdered and sieved and mounted under glycerol and safranin to study the nature and identification of particles.

Extraction: The dried samples were powdered and 5g each of M. tridentata, M. hastata and P. foetida was extracted with 50 ml methanol in a Soxhlet extractor for 12 hr. The extract was filtered and methanol removed by distillation under reduced pressure. The residue was subjected to TLC and HPLC profiling.

Thin Layer Chromatography: 1mg ml-1 solution of the whole plant extracts of Merremia tridentata, Merremia hastata, Paederia foetida (5mg ml-1) were spotted on pre-coated silica gel 60 F254 TLC plate. Developed the plate in Toluene: Ethyl acetate: Glacial acetic acid (5:5:0.2) solvent system. The plate was then dried and derivatised with Anisaldehyde-Sulphuric acid (AS) reagent and visualized in the visible light. Samples were assayed in triplicate and detection was done at 265 nm. The concentration of b- sitosterol was calculated using area under the curve method.

Anatomical Characters: Anatomically and histochemically these three plants show variations in many characters. In stem they show variations in nature of epidermis, nature of cortex, nature of inclusions in the cortex, nature of xylem, inclusions in the pith region etc. In M. tridentata ssp. tridentata TS of stem is angular in outline with 8 protruberances (Fig. 2 A), in M. tridentata ssp.hastata TS of stem is pentagonal in out line (Fig. 2 F). But in the case of P. foetida TS of stem is oval in outline (Fig. 2 K). Starch grains are present only in some cortical cells and pith cells in the case of both Merremia species (Fig. 2 D, E, I & J). In P. foetida starch grains are present in all the cells of the cortex and cells towards the periphery of the pith (Fig. 2 N & O).  Details of anatomical characters of stem are given in table 1 and Fig. 2. Root anatomical characters are also shows differences in many characters like nature of vascular region, medullary rays, starch grains etc. 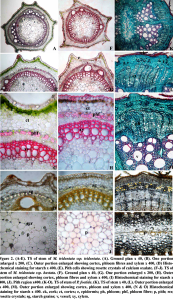 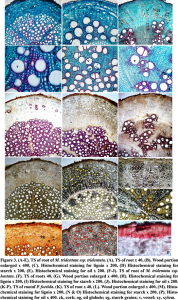 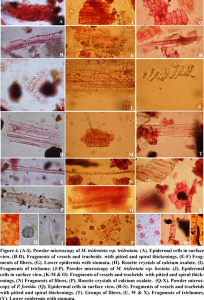 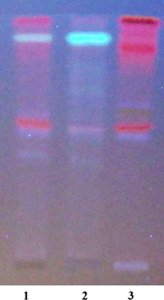 HPLC method has been developed to distinguish the three plants have almost same chemical profiles with little difference in their quantity. Quantification of b- sitosterol was carried out using the area under the curve method. The concentrations b- sitosterol in M. tridentata ssp. tridentata, M. tridentata ssp. hastata and P. foetida were 0.099 %, 0.134 %, and 0.008 % respectively (Table 4 & Fig. 6).

TABLE 4: CONCENTRATIONS OF b- SITOSTEROL 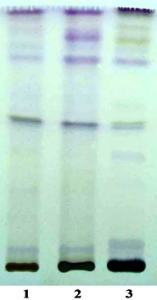 CONCLUSION: The present study helps to distinguish them conveniently and coming to a conclusion that the drug Prasarini is equated with Paederia foetida as the source plant and the two sub species of Merremia tridentata are used as the substitutes. For further confirmation pharmacological studies are to be carried out.