ABSTRACT: Diclofenac sodium is a nonsteroidal anti-inflammatory drug (NSAIDs) with analgesic and antipyretic properties. Because of widespread use of this drug, quality control testing should be done for diclofenac marketed products to ensure safety; efficacy; accepted quality; rationality of use to protect public health. Quality of pharmaceuticals has been great concern of WHO. Drug cost needs to be reduced as health care costs continue to rise. Generic products need to be therapeutically equivalent to the brand innovator products. This can be achieved only when bioequivalent study is conducted to show whether a generic product is interchangeable with brand product or another generic product. In this study focus is given to evaluate and compare the quality of six different brands of enteric coated diclofenac sodium tablets marketed in Addis Ababa and also to study the different   physicochemical properties of diclofenac sodium enteric coated tablets and to compare in vitro dissolution profile of six brands of diclofenac sodium delayed release tablets.

INTRODUCTION: The oral route of delivery is the most preferred administration route as it offers one of the safest and most convenient methods of drug administration. Tablet Dosage form is one of a most preferred dosage form all over the world. Almost all drug molecules can be formulated in a tablet and process of manufacturing of tablets is very simple, and is very flexible 1. In tablet formulation there are active ingredients and the excipients. The excipients can include glidants (flow aids), diluents, binders or granulating  agents  and  lubricants  to  ensure  efficient  tableting; disintegrates  to  promote  tablet  break-up  in  the digestive  tract;  sweeteners  or  flavors  to  enhance  taste;  and pigments  to  make  the  tablets  visually  attractive.

A  polymer  coating  is  often  applied  to  enhance  the tablet's appearance or to make the tablet smoother and easier to swallow and  to control the release rate of the active ingredient,  to  make it  more resistant to the environment (extending its shelf life) 2. Enteric-coated tablets are compressed tablets coated with an inert substance which resists dissolution in gastric juices, but freely dissolves and liberates the drug in the intestine 3.

Materials used for enteric coatings include cellulose acetate phthalate (CAP), polyvinyl acetate phthalate (PVAP) and hydroxypropyl methyl cellulose phthalate HPMCP, fatty acids, waxes, shellac, plastics and plant fibers 4. The choice of the polymer and the thickness of the coated layer are critical to control the pH solubility profile of the enteric coated dosage form. The most common drugs which cause stomach ulcers like aspirin, diclofenac and naproxen are frequently available with enteric coatings. Inflammation is a defensive response that begins after cellular injury, which may be caused by microbes, physical agents (burns, radiation, and trauma), chemicals (toxins, caustic substances), necrotic tissue and/or immunological reactions. Diclofenac sodium is a nonsteroidal anti-inflammatory drug (NSAIDs) with analgesic and antipyretic properties (Fig. 1). 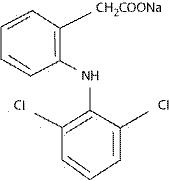 It inhibits the prostaglandin synthesis 8. It is well absorbed orally, 99% protein bound, metabolized and excreted both in urine and bile. The plasma t½ is 2 hours. However it has good tissue penetrability and concentration in synovial fluid which is maintained for 3 times longer period than in plasma, exerting extended therapeutic effect within joints.

It is poorly soluble in simulated gastric fluid and highly soluble in simulated intestinal fluid suggesting that the pH affects the solubility and absorption of diclofenac. So it required a delayed release mechanism, most often accomplished with stable coating that prevents the drug in stomach and there by delayed release. The formulation is in more favourable environment of the small intestine; this technology commonly referred as enteric coating system 9.

In-vitro testing or quality control of drugs is a set of studies or experiments undertaken during production in process and occasionally ought to be undertaken post production by regulatory agencies and researchers. Routine laboratory testing of drugs in the market is a crucial to protect public health especially in developing countries where counter-feit and substandard drugs have become a major challenge to health care services. The objective of this work was to evaluate and compare the quality of six different brands of 50 mg enteric coated diclofenac sodium tablets marketed in Addis Ababa.

Preparation of Standard Calibration Curve: 20 mg of diclofenac sodium was taken in a 50 ml volumetric flask and volume was made up to the mark by adding the buffer solution (pH 6.8). The solution was used as a stock solution having a concentration of 0.4 mg/ml. The stock solution was further diluted with phosphate buffer to obtain concentrations ranging from 2 µg/ml- 20µg/ml. Absorbance of the samples was taken at 276 nm in a UV spectrophotometer using phosphate buffer pH 6.8 as blank. Plot between the concentrations versus absorbance was obtained 10.

Analysis of Drug Content: Twenty tablets from each brands were finely powdered and a quantity of powder equivalent to 100mg of Diclofenac sodium were accurately weighed and dissolved in phosphate buffer pH 6.8 and the volume was made up to 50 ml with the same buffer and analyzed for the drug content using UV spectrophotometer 10.

Determination of Hardness of the Tablets: Ten tablets from each Brand were selected and hardness was measured using hardness tester (CALEVA). The tablets were placed between the two jaws of the hardness tester and the hardness was measured as the strength needed to crush the tablets. That crush the tablet then the average crushing strength was calculated along with the standard deviation. This was triplicate.

Determination of Friability of the Tablet:  Twenty tablets from each brand were randomly selected and carefully de dusted prior to testing then accurately weighed and placed in the friability tester (ERWEKA). The friabililator was rotated 25 rpm per min for 4 min so that the tablets were subjected to 100 revolutions.

Determination of Disintegration Time of the Tablet: One tablet was placed in each of the 6 tubes of disintegration apparatus USP (ERWEKA). The assembly was suspended in the beaker containing 0.1N HCl for two hours. At the end of two hours, the medium was replaced with phosphate buffer pH 6.8 followed by operation of the disintegration tester for 45 minutes. The time taken for all the tablets to disintegrate was noted 11. The test was repeated three times and the average disintegration time was calculated.

Dissolution Test of Enteric Coated Diclofenac Sodium Tablets: A comparative in-vitro dissolution study was conducted in USP Type I, basket model according to the procedure described in the US Pharmacopeia (USP 2007).  The test was carried out using 900 ml of 0.1 N HCl for 2 hours followed by phosphate buffer pH 6.8 for the next 1 hour as dissolution media and at 37 ± 0.5°C at 100 rotations per minute.

Samples of 10 ml were withdrawn at predetermined time intervals (5, 10, 20, 30, 45, 60 min and replaced with the same volume of fresh buffer. Each sample solution was filtered, diluted and the absorbance determined at 276 nm by UV spectrophotometer with phosphate buffer as blank. The percentage releases of the drug at different time intervals were calculated.

RESULTS AND DISCUSSION: Six brands of diclofenac sodium enteric coated tablet having label strength of 50 mg and manufactured from four different countries were purchased from a community pharmacy in Addis Ababa. These products are   Indian, Korean, Germany and Cyprus products were mostly marketed in and around Addis Ababa due to their low price. All the products tested were within their expiry date. The tablets were analysed for their drug content, hardness, friability, weight variation, dissolution and disintegration in accordance to USP limit.

Calibration Curve of Pure Diclofenac Sodium: The values of absorbance were plotted against respective concentrations (Fig. 2). The concentrations ranging from 2 to 20 µg/ml showed linearity when the curve was plotted indicating it obeyed beers law. The regression coefficient R2 was 0.999. 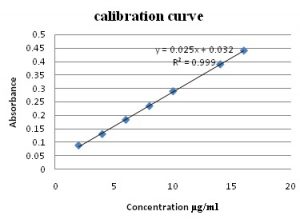 Drug Content of Different Brands of Diclofenac Sodium 50 mg Tablets: Determination of the drug content was performed according to USP method. The drug content value was found to be between 92.8 % - 99.9 % (Table 2) which is within the USP limit (90-110%). It ascertains the presence of diclofenac sodium in all the brands and so could not be judged as counterfeits without active phar-maceutical ingredient. The result was similar to the study reported in India (Giri TK et al., 2012). Where the drug contents were between 95.90 - 99.42 %.

Friability, Hardness and Diameters of Different Brands of Diclofenac Sodium Tablets: The friability of the tablets  which is determined using Friabilator  was found between 0.02 - 0.05 % (Table 3) this indicates an acceptable result because Conventional compressed tablets that lose less than 1% of their weight are generally considered acceptable as specified in USP. The study conducted by (Giri et al., 2012) focusing on the comparison of   four brands of diclofenac determines the friability of the tablets between 0.012 - 0.102 % which is more or less similar to the result obtained in this study. This value indicates sufficient mechanical integrity and strength of the tablets after abrasion and shock.

The hardness of the tablets is an essential criterion in the determination of the ability of the tablets to resist chipping, abrasion or breakage under conditions of storage, transportation and handling. Too hard tablets may result in decrease in the release of the drug. The hardness of the tablet was found to be 46.7N-48.3N (Table 3). This shows all the tablets required highest pressure to crush the tablet. The results obtained from other study was in a similar range 12. Results from weight variation study (Table 3) all brands showed percentage of weight variation ranging from 0.012 to 0.039. It is evident that the deviations from the average weight are below the permissible value 5%. The result obtained from other study show approximate value (0.005- 0.010) 12.

Dissolution Profile of Six Brands of Diclofenac Sodium Tablet in Both Hydrochloric Acid (0.1N) and Phosphate Buffer pH (6.8): From the dissolution profiles( Fig. 3 and Fig. 4), it is clear that there was almost no drug release from all enteric coated formulations in the acidic medium as expected for an enteric coated tablet. However, in the phosphate buffer medium (pH 6.8), more than 80 % of drug was released. Diclofenac sodium is a salt of a weak acid (2-[(2,6-dichlorophenyl) amino] benzene-acetic acid). Therefore, the solubility strongly depends on the pH of the dissolution medium. The dissolution profiles were statistically compared by calculating the similarity factor (f2).

(f2= 50) is border line value for similarity of considered as the conversion factor which takes into account variability between samples at each time point. The similarity factor (f2) of 83% (acceptable limit 50-100) 13 were calculated. A comparative in-vitro dissolution study provides a basis for predicting the likelihood of achieving a successful in-vivo bioequivalence performance.

This in vitro dissolution study showed that the test brands ( brand A, B, C, E, F) and reference brand (D) were comparable, here the reference was selected as brand D based on the results of the other evaluation tests performed in which it showed good result compared to the other brands. Further the in -vitro dissolution tests of the six brands showed comparable results. 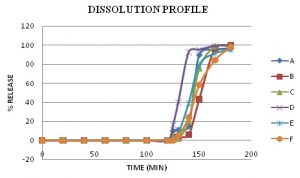 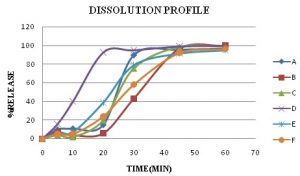 CONCLUSION: The six brands of diclofenac sodium enteric coated tablets analyzed in this study could be regarded as being pharmaceutically and chemically equivalent and can therefore be freely interchanged. Drug content, hardness, friability, disintegration time and dissolution profiles of all enteric coated products used in the study were within USP specified limits.