Newer NSAIDs like Aceclofenac and Lornoxicam are being marketed by pharmaceutical industries with claims of better efficacy and safety than conventional NSAIDs like Diclofenac. So this  study  aims  to  comparatively  assess  the safety, efficacy  and cost of Aceclofenac,  Lornoxicam  and Diclofenac in patients of musculoskeletal disorders. Patients presenting with musculoskeletal disorders were randomized into three treatment groups (50 in each).  Comparative analgesic efficacy assessment between the three drugs were done by using   visual analog scale (VAS) reading on Day-0 and then weekly till 3 weeks; adverse drug reaction (ADR) information  were  collected by spontaneous reporting from patients and by active surveillance and were recorded in a predesigned proforma. Relative cost was assessed by comparative unit cost price of individual drugs (of different pharmaceutical companies).  It was observed that Lornoxicam, Aceclofenac and Diclofenac are equally effective as analgesic. Both Aceclofenac and Lornoxicam have similar ADR profile which is significantly less than that of Diclofenac. Though  analgesic  activity  and  safety  profile of  Aceclofenac  is  comparable  to  Lornoxicam, but Aceclofenac  is  cheaper than Lornoxicam , hence comparatively cost effective.

Selective COX-2 inhibitors like Rofecoxib, Valdecoxib, etc were introduced with claims of better GI safety. But Rofecoxib was withdrawn from market due to higher incidence of serious thromboembolic events (Bersa Lier et al., 2005) 1 & Valdecoxib has higher incidence of toxic epidermal necrolysis. Recently newer  NSAIDs  like Aceclofenac and Lornoxicam are being marketed by various Pharmaceutical industries with claims of better efficacy and safety than conventional  NSAIDs like  Diclofenac  and Piroxicam , on the basis of cox -1 sparing  & preferential COX - 2 inhibition  potential with Aceclofenac (Hinz B. et al) 2 and  better synovial fluid penetrability of lornoxicam  (Skjodt. N et al) 3.Though there is some data regarding comparison of Aceclofenac with Diclofenac & lornoxicam with Diclofenac, but there is no comparative data between Aceclofenac & Lornoxicam or regarding   the cost effectiveness among these three drugs.

So the aim of our study was to make a comparative assessment regarding the safety, efficacy and cost between Aceclofenac, Lornoxicam and Diclofenac.

This study may also expose any unreported ADR of newer NSAIDs like Lornoxicam and Aceclofenac.

MATERIALS AND METHOD: It was a prospective open labeled randomized interventional study conducted at S.C.B. Medical College & Hospital, Cuttack, Odisha, India, in the Department of Pharmacology, in collaboration with Deptt. of Orthopedics, in the year 2010 & 2011 with due approval of the Institutional Ethics Committee.

Inclusion criteria-Patients of either sex, between  15-50 years of age, attending Orthopedics O.P.D in S.C.B. Medical College  and  Hospital, Cuttack,  with complaints of musculoskeletal disorders like arthritis, low backache ( LBA) and  traumatic injury, etc  , requiring NSAIDs  and willing to participate in this study  were included .

Written informed consent was obtained from the patients participating  in the study .

Enrollment into the study: Patients of musculoskeletal disorders fulfilling the inclusion criteria were enrolled into the study. Their   detail clinical history was obtained regarding the site and severity of musculoskeletal pain. General examination (i.e.  measurement of blood pressure, pulse, pallor, icterus, temperature,  pedal  edema etc. )  along with examination of  musculoskeletal  system  like  straight  leg  raising  (SLR) test,  number of  joints  involved,  limitations  of  range  of  movement (ROM)  etc.  were undertaken.

Relevant laboratory tests like Haemoglobin, DC, TLC and Stool Occult Blood Tests were also done routinely in each patient before administration of the test drugs.

Randomization & Administration of Test drugs (NSAIDs): After enrollment, each patient was randomly allocated into one of the three NSAIDs treatment group of 50 each.  Randomization was done using table of random number method 4.

The duration of treatment varied from 2-3 weeks depending on requirement of NSAIDs.

Co prescription  of PPI(Proton Pump Inhibitors) along with NSAIDs: In view of claims of better G.I. safety of Lornoxicam & Aceclofenac, Proton Pump Inhibitor (Pantoprazole) was co prescribed in Lornoxicam and Aceclofenac treatment groups only in patients who have complaint of Acid Peptic disease (i.e. flatulence , hyperacidity or abdominal discomfort,  etc )  but the patients who denied any history of acid peptic disease were given only Lornoxicam or Aceclofenac without PPI to evaluate their GI safety. Patients with documented peptic ulcer were totally excluded from the study. In Diclofenac treatment group all the patients were co prescribed with PPI considering our previous experience of complaint of epigastric discomfort by majority of our patients when taken Diclofenac without PPI. Hence, while comparing the GI safety between the three treatment groups, the GI adverse events in patients co prescribed with PPI were only compared.

A visual analog scale ranging from 0-10 on rating was used for the study. The patients were asked to mark the level of the pain on the scale in the zero day of treatment. Then, the scale was given to each individual patient and he was asked to come again at weekly intervals and mark the level of the pain on that visual analog scale, till completion of treatment. The VAS readings were recorded in the case record forms and were analysed statistically to evaluate the comparative analgesic activity.

The data obtained were summarized and statistically analyzed using ANOVA, chi square  tests  or  paired t test  depending on the requirements.

RESULTS & DISCUSSION: The present study was undertaken to evaluate the Efficacy, Safety and Cost between Lornoxicam, Aceclofenac and Diclofenac in patients with musculoskeletal disorders. Majority of the patients in our study were patients of low backache, osteoarthritis or trauma.

The comparative efficacy assessment: Evaluation of analgesic activity between the three drugs was done by using Visual Analogue Scale (VAS) and is depicted in table 1. 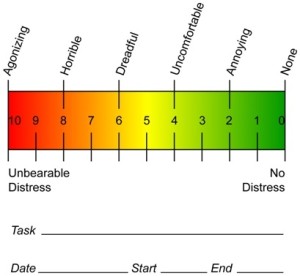 However when the analgesic activity of each of the three drugs were compared by One way ANOVA (between group comparison) followed by LSD Post Hoc Test, the F & P value did not show any significant difference among their analgesic activity.  Though the percentage reduction in VAS was highest i.e.,  62% with Diclofenac followed by 56% with Aceclofenac & 48% with Lornaxicam, but this difference in the three treatment groups also did not demonstrate any statistically significant difference.

Hence, our study indicates equal analgesic potential of all the three drugs i.e. Lornoxicam, Aceclofenac and Diclofenac. This finding somehow corroborates with the study of Herrmann WA et al 7 who found Lornoxicam & Diclofenac had similar analgesic effect; but the finding of Ward DE et al 8 regarding statistically superior analgesic activity of Aceclofenac in comparison to Diclofenac and Pasero et al 9 i.e. higher - 22% improvement in handgrip with Aceclofenac vs. 17% with Diclofenac does not match with our study.

This study showed that the GI AE (Gastro Intestinal Adverse events) i.e. dyspepsia, abdominal pain, vomiting etc. were maximum i.e. 20% with Diclofenac which was significantly higher than GI AE with Lornoxicam-10% (Chi 2.18 to 4.39) and Aceclofenac- 8%(Chi 5.02), But there was no significant difference  between incidence of AE with lornoxicam & Aceclofenac(Chi 0.7).

Our  findings of better GI safety profile of Aceclofenac in comparison to diclofenac corroborates  with that of pareek et al 10 & Ward DE et al 8 (where in 397 patients it was found that tolerability of Aceclofenac  was better than with Diclofenac). Aceclofenac has COX-1 sparing & COX-2 inhibitory actions (Hinz B et al) 2 which may suggest its equal efficacy but better gastrointestinal tolerability than Diclofenac. In the Study conducted by Herrmann WA et al 7 on 164 patients showed that the incidence and severity  of adverse events  with Lornoxicam and Diclofenac were comparable and overall tolerability was rated as ‘very good/good’ however in our study we found better GI safety with lornoxicam in comparison to Diclofenac. The GI Adverse events of 20% and total Adverse events of 24% with diclofenac in our study was nearly similar to  report of other studies. i.e. 20% Adverse events with Diclofenac (P. Emery  et al) 11.  All the patients in our study in diclofenac treatment group have received PPI. 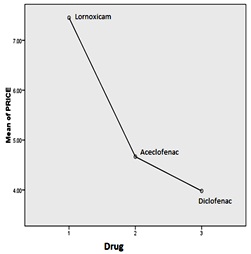