COMPARATIVE SAR OF SYNTHETIC COUMARIN DERIVATIVES FOR THEIR ANTI-INFLAMMATORY ACTIVITY

COMPARATIVE SAR OF SYNTHETIC COUMARIN DERIVATIVES FOR THEIR ANTI-INFLAMMATORY ACTIVITY

ABSTRACT: Coumarin (2H-1-benzopyran-2-one) nucleus and it's natural, as well as synthetic derivatives, has been a field of interest due to its unique tendency to adopt varying categories of substitutions which provides the basis for modifying this nucleus for multidisciplinary actions. The extensive literature review reflects that coumarin derivatives have been synthesized by several structural modifications and exhibit numerous activities like anti-inflammatory, anti-tumor, anti-HIV, anticoagulant, antimicrobial, antioxidant, anti-hepatitis, hepatoprotective, anti-pyretic, analgesics, anti-thrombotic, vasodilatory, anti-mutagenic, antioxidant, anti-fungal, anti-viral, anti-hypertensive, anti-tubercular, anti-convulsant, anti-adipogenic and anti-hyperglycemic. They also inhibit lipooxygenase, cyclooxygenase, MAO-A, MAO-B, and TNF-alpha enzymes. The purpose of this study is to review the anti-inflammatory potentials of coumarins and to generate a comparative SAR that may support to improve their anti-inflammatory activity by newer and potent diverse structural modifications of the coumarin nucleus. The review shows that wide varieties of coumarin derivatives have been synthesized and have shown anti-inflammatory potentials. These derivatives can be further modified with the help of SAR generated in the present work to improve the anti-inflammatory potentials of the versatile coumarin nucleus.

INTRODUCTION: Coumarin owes their class name to ‘Coumarou,’ the vernacular name of the tonka bean; consist of fused benzene and α-pyrone rings 1. It represents a vast family of compounds naturally found in plants. There are four main coumarin sub-types which include simple coumarins, furanocoumarins, pyrano coumarins, and pyrone-substituted coumarins 2. The simple coumarins are the hydroxylated, alkoxylated, and alkylated derivatives of the parent compound, coumarin, along with their glycosides.

It involves derivatives like coumarin, 7- hydroxyl coumarin, and 6, 7-di hydroxycoumarin. Furano coumarins consist of a five-membered furan ring attached to the coumarin nucleus, divided into linear or angular types with substitution at one or both of the remaining benzoid positions 3. It involves derivatives like psoralen and angelicin. Pyrano coumarin members are analogous to the furanocoumarins but contain a six-membered ring.

It involves members like seselin and xanthyletin Coumarins substituted in the pyrone ring include 4-hydroxycoumarin 4. Coumarin show anti-viral and anti-bacterial activities 5 in addition to various anti-inflammatory abilities 6.

Several coumarins possess antioxidant capacity scavenging superoxide anion radicals 7, 8, reduce edema in rat paw carrageenan test and other inflammatory rodent models 9, and inhibit the lipooxygenase and cyclooxygenase pathways of arachidonic acid metabolism 10, 11. The comparative SAR study will show the futuristic approach for the development of coumarin derivatives by suitable structural changes. As the coumarin nucleus is a promising entity in the treatment of various inflammatory disorders; hence, its development is of keen importance. The present work is intended to review the anti-inflammatory potential of coumarin derivatives and to generate the SAR of structurally varying coumarin derivatives for generating more potent analogs.

TABLE 1: LIST OF ACTIVE SUBSTITUTIONS WITH TNF-α  INHIBITORY ACTIVITY WITH THE MOST ACTIVE AT TOP

TABLE 2: LIST OF ACTIVE SUBSTITUTIONS WITH IL-6 INHIBITORY ACTIVITY WITH THE MOST ACTIVE AT TOP

Among the various derivatives with 3-carbonitrile and 6-chloro substitution, the maximum inhibitory activity was shown by the 3-methoxyphenyl group at R. The activity data shows that an electron donating group is desired at R for TNF-α inhibitory activity Fig. 7. Maximum IL-6 inhibition was obtained with phenyl and 4-OH phenyl substitution at R Fig. 8. 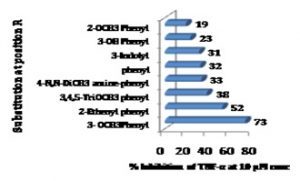 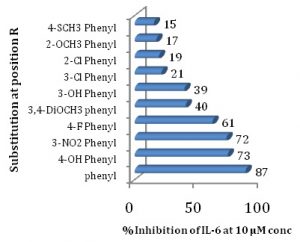 Modifications on 3-carboxylate coumarins: A novel series of coumarins Fig. 2 were synthesized by E.Y. Bissonnette et al.13 that were found to be the moderate inhibitors of TNF-α thus exhibited the anti-inflammatory activity. The coumarin nucleus substituted on position-3 with a carboxylate group with either 5-chloropyridin-3-yl group or with phenyl group resulted in the compounds with similar activity. The activity was mainly affected by the substituent on position-6 of the coumarin nucleus. Unsubstituted position-6 resulted in the less active analogs whereas an introduction of 6-acetoxy methyl or 6-propionyloxy methyl groups increased the activity. 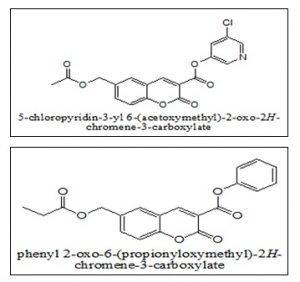 Modifications on Coumarin-Based Carbamates: A novel series of coumarin-based carbamates Fig. 3 and Table 3, 4 was synthesized by J.F. Cheng et al., 14 which exhibited the potent inhibitory activity of TNF-α. 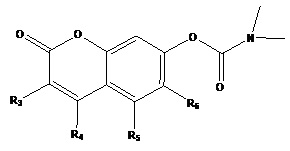 TABLE 3: LIST OF ACTIVE SUBSTITUTIONS WITH THE MOST ACTIVE AT TOP

The activity data shows that substitution at the C-6 position of coumarin nucleus has majorly influenced the TNF-α inhibitory activity Fig. 9. On relating the activity with the structural modifications, it is observed that C-6 position must contain halogen or methoxy substituent. Alkyl groups at this position were found to lower the activity. It is also observed that at C-3 position, hydrophobic groups are favored. The activity appears to increase with the size of the alkyl group at this position. It appears that a small aliphatic group at the C-4 position is optimal for activity. 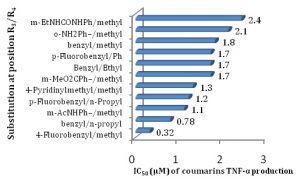 Modifications on 6-alkoxy and 7-alkoxy coumarins: Various structural derivatives of 6-hydroxycoumarin (6HC) and 7-hydroxycoumarin (7HC) Fig. 4 and Table 5, 6, 7 were synthesized by Koketsu et al. 15 and their effects on lipopoly-saccharide/interferon-γ (LPS/IFN-γ)-stimulated nitric oxide (NO) production were examined in murine macrophage RAW264 cells. Among these derivatives, 6HC-8 (6-(3-phenylpropoxy) coumarin), 6HC-14 (6-(2-octynyloxy) coumarin), 7HC-14 (7-(2-octynyloxy) coumarin), and 7HC-16 (7- (3, 5-dimethoxybenzyloxy) coumarin) markedly suppressed NO production at low concentration (25 µM). It is reported that excessive NO production can be harmful and trigger rheumatoid arthritis, gastritis, bowel inflammation, neuronal cell death and bronchitis 16, 17 and thus these synthesized coumarin derivatives could be the effective agents for alleviating symptoms of inflammation.

TABLE 5: LIST OF ACTIVE SUBSTITUTIONS WITH THE MOST ACTIVE AT TOP 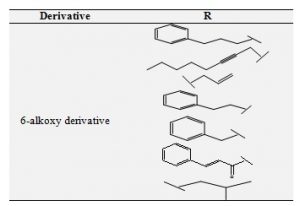 TABLE 6: LIST OF ACTIVE SUBSTITUTIONS WITH THE MOST ACTIVE AT TOP 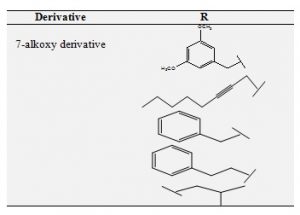 Modification of Psoralen Nucleus to Develop Novel Furocoumarin Derivatives: Borgatti et al., 18 synthesized furocoumarin derivatives Fig. 5 by modifying the psoralen nucleus. The data shows the development of a novel lead for inhibiting NF-kB dependent biological functions. It also exhibited high efficiency in inhibiting NF-kB/DNA interactions. They also found this lead compound to be a potent inhibitor of IL-8 gene expression in TNF-α treated IB3-1 cystic fibrosis cells. The furocoumarin compound could be used as a lead compound for generating libraries of structurally-related molecules with better anti-inflammatory potentials. The results of inhibition of IL-8 mRNA accumulation in TNF-α treated IB3-1 CF cells showed that psoralens-like molecules bearing methyl groups (TMP and TMA) are more active in inhibiting NF-kB/DNA interactions in respect to the reference compounds psoralen and angelicin. In terms of potency, compound 2 was found to be the most active furocoumarin derivative.

Based on the anti-inflammatory assay, they found that UMC exhibited the highest inhibitory activity against lipopolysaccharide (LPS)-induced NO production in RAW 264.7 cells with an IC50 value of 72.98 μg/mL. It was also reported that the inhibition of NO production in RAW 264.7 cells suppressed the release of pro-inflammatory mediators NO, PGE2, iNOS, COX-2, and TNF-α.20

Inflammatory mediators are known to increase the expression of cell adhesion molecules on the endothelial cells that lead to random infiltration of the leukocytes across the blood vessels and hence causes inflammation. Thus, inhibition of cell adhesion molecules can prove to be a useful therapeutic approach to regulate the inflammatory response. It was found that dihydroxy and diacetoxy derivatives of thiocoumarin were more potent in comparison to the corresponding coumarin derivatives which suggest that the presence of sulfur improves the inhibitory activity Fig. 10, 11.

CONCLUSION: A large number of structurally novel coumarin derivatives have been reported to show anti-inflammatory activity. SAR generated by correlations of the available data will help in the development of new active compounds by incorporating desired substituents at various positions, majorly 3, 6, and 7 that are mostly responsible for anti-inflammatory activity. For carbamates, it is observed that a benzyl derivative is desired at the third position for optimal activity Table 3. Substituting this position with phenyl derivative resulted in the inactive compounds Table 4. Position fourth in carbamates must contain small aliphatic alkyl groups such as methyl, ethyl or propyl for optimum activity Table 3.

The data also suggests that the thiocoumarins are more potent anti-inflammatory agents, than their corresponding oxygenated coumarins Table 8 and Table 9. The present review indicates about the various coumarin derivatives that show anti-inflammatory activity and the various substitutions along with their contribution towards the activity.

On performing the comparative SAR analysis, it was observed that the coumarin and its derivatives are the promising chemical category as anti-inflammatory agents though their mechanism of action may be through varying routes such as through TNF-α, IL-6 inhibition, and ICAM-1 inhibition. Due to the versatility of the coumarin nucleus towards structural modification, a variety of substitutions had been placed on the coumarin nucleus to improve its potency and efficacy for the treatment of inflammation. These modifications along with their activity data have been thoroughly examined and had led to the development of SAR for the coumarin nucleus for anti-inflammatory activity, according to which the most important role is played by the substitution at position-6 of coumarin nucleus. The changes in the substitutions at this position have dramatically altered the biological activity of the compounds. The activity was found to decrease or abolish if this position was left unsubstituted. Smaller groups such as H and F are only acceptable at position 5 of all coumarin derivatives. Substituting this position with any other group resulted in the inactive compounds Table 4.

The data plotted in Fig. 7 indicates that for the inhibition of TNF-α by 4-styryl coumarin derivatives, the 3-methoxyphenyl substituent had the maximum inhibitory effect. On increasing the methoxy groups, the decrease in activity was observed.  Shifting of the methoxy group to the second position on the phenyl ring also resulted in the fall in the inhibitory effect. Leaving the phenyl ring unsubstituted or substituted with an electron withdrawing group resulted in fall of the inhibitory response.

On the contrary, IL-6 inhibition Fig. 8 with same derivatives was found to show different behavior. The highest inhibition was found with the unsubstituted phenyl ring at R. Phenyl ring when substituted with an electron withdrawing group such as 3-nitro, 4-fluoro and 4-hydroxy showed comparatively better inhibitory response then that with the electron donating groups such as 2-methoxy. This could assist the future research work on coumarins in the field of inflammation and designing of newer coumarin analogs. On studying the effect of different structural modifications of coumarin-based carbamates on TNF-α production Fig. 9 it was observed that methyl and the n-propyl group is highly acceptable at the R4 position.

Substituting this position with an electron withdrawing group or phenyl ring resulted in the inactive derivatives Table 4 which show only smaller and straight chain alkyl groups are acceptable at this position. At R3 position benzyl and 4-fluoro benzyl, substituents showed maximum response along with n-propyl and methyl at R4 respectively. Substituting phenyl ring with amine or amide groups at R3 resulted in a decrease in activity. It was also observed that on letting this position unsubstituted resulted in the compounds with no anti-inflammatory activity. Similarly, substituting this position with o, m or p-CF3 on phenyl ring and electron donating groups such as methoxy or methyl resulted into the inactive analogs. From the study of ICAM-1 inhibition by oxygenated coumarins and their corresponding thiocoumarins Fig. 10 and Fig. 11, it was observed that for the desired effect the sixth and seventh position of coumarin nucleus must be simultaneously substituted with a hydroxyl group. On substituting anyone the respective positions the activity was found to decrease tremendously.

Although, a similar effect but to a lesser extent was observed with OAc on both the positions. In a very similar fashion, the thiocoumarins showed the same trend in the inhibition of ICAM-1. However, they were comparatively more potent Table 8 and Table 9 from their corresponding oxygenated coumarin analogs.

ACKNOWLEDGEMENT: We are highly obliged to the Principal of Modern Institute of Pharmaceutical Sciences, Indore for providing the facilities and staff of the Institute for their help in the searching article and different journals which are of great help for the completion of this review article.