Purpose: Miconazole nitrate is a widely used antifungal agent but its use in topical formulation is not efficacious because deep ereated fungal infections are difficult to treat with conventional topical formulation. The purpose of this study was to prepare miconazole incorporated different novel carriers such as liposomes, ethosomes and to compare their in vitro skin permeation studies with plane ointment using skin model.

Methods:  In vitro release studies of miconazole from the liposomal and ethosomal suspension incorporated ointment to an aqueous receptor phase through pig skin was analyzed spectrophotometrically at a wavelength of 272nm.

Results:  In vitro skin permeation study results showed that the steady state fluxes of drug was higher in case of ethosomal suspension incorporated ointment as compared to liposomal ointment.

INTRODUCTION: A cosmetic or medical composition for topical application to the skin, results in the transdermal passage of an active ingredient, or in the introduction of such agent into the skin.  Transdermal drug delivery system (TDDS) has been in existence for a long time. In the past, the most commonly applied systems were topically applied creams and ointments for dermatological disorders. Material administration on the skin creates a concentration difference between the application site and the skin interior. This drives the applied molecules through the skin in proportion to the skin permeability and the involved skin area:

In general, more   than one skin permeability value and various driving forces need to be summed up in the calculation of the integral flux of material across the skin. For purely diffusive flows, i.e., when all the molecules are crossing the skin via molecular permeation, the skin permeability value may be taken to be proportional to the average diffusivity ('diffusion constant') and to the partition coefficient of each permeant in the skin. The diffusion pathway length (skin thickness, ds) also plays a role;

The permeant diffusivity (Dm), as well as the lateral diffusion constant of lipids, both grow in a complex fashion with the permeant size (rm) and with the excess area in the skin that is available for the diffusive permeant motion along the lipid bilayer; the diffusivity value thus increases with the lipid area expansion (A/4L) 4, The partition coefficient (Km) increases exponen­tially with the dimensionless activation energy (G) for the transport process 1, 2.

When the skin is entirely impermeable to the mechanism, that is, on for penetration rather than on for permeation, this crucially depends not only on adequate membrane deformability but also on the aggregate propensity to insert itself between the cells in the skin barrier. The previously available information on the efficiency of skin penetration can be summarized as follows. Lipid vesicle (liposomes and ethosomes) showing at least some capability to penetrate into the skin were either made from the mixtures of biological (e.g. skin) or else from the moderately pure (<90% or, more often, <80%) lipids. The successful prepa­rations also often contained solvents (such as ethanol or propylene glycol) or other permeation enhancers (such as lyso-phospholipids or fatty acids). The highest skin penetrating and drug-carrying capability was frequently measured with the lipid suspensions prepared in a relatively harsh process (such as the reverse phase evapo­ration or sonication).

Liposomes are a form of vesicles that consist either of many, few or just one phospholipid bilayer. The polar character of the liposomal core enables polar drug molecules to be encapsulated. Amphiphilic and lipophilic molecules are solubilized within the phospholipid bilayer according to their affinity towards the phospholipids. Liposomes originally were identified with any closed and water-filled body consisting of lipids: Simple liposomes could thus comprise one or upto many hundred lipid bilayers, depending on the precise aggregate composition and manufacturing procedure. All membrane com­ponents, furthermore, are assumed to be mem­brane- stabilizing 5. Pure phosphatidylcholine vesi­cles or their mixtures with cholesterol fulfil these requirements and are also stable. Ethosomes are soft, malleable vesicles composed mainly of phospholipids, ethanol (relatively high concentration) and water. These “soft vesicles” represents novel vesicular carrier for enhanced delivery to or through the skin. The size of Ethosomes vesicles can be modulated from tens of nanometers to microns 5, 16, 23.

Benefits of ethosomes over other transdermal vesicular systems:

Miconazole is an imidazole antifungal agent, developed by Janssen Pharmaceutica, and commonly applied topically to the skin or mucus membranes to cure fungal infections. It works by inhibiting the synthesis of ergosterol, a critical component of fungal cell membranes. It can also be used against certain species of Leishmania protozoa (which are a type of unicellular parasite), as these also contain ergosterol in their cell membranes. In addition to its antifungal and antiparasitic actions, it also has some limited antibacterial properties. It is marketed in various formulations under various brand names. Miconazole is also used in Ektachrome film developing (along with surfactants such as Photo-Flo) in the final rinse of the Kodak E-6 process and similar Fuji CR-56 process, replacing formaldehyde. Miconazole is also identified as a final rinse additive in their formulation of the process C-41RA rapid access color negative developing process. Miconazole is mainly used externally for the treatment of athlete's foot, ringworm and jock itch. Internal application is used for oral or vaginal thrush (yeast infection). In addition the oral gel may also be used for the lip disorder angular cheilitis 23, 25.

Preparation of miconazole loaded liposomes: Liposomes were prepared from soya lecithin and cholesterol (7:3 ratio) and miconazole nitrate by a Hand shaking method 25. Drug, Soya lecithin and cholesterol were dissolved in chloroform in a round bottomed flask (RBF). RBF was rotated in a clockwise direction for film formation around the sides of a flask. The film was dried and then PBS (Phosphate buffer saline pH 5.5) was added in a flask and again flask was rotated but in anticlockwise direction. These liposomes were mixed with aqueous phase in place of miconazole, and then it was prepared to ointment as following above procedure.

Preparation of miconazole loaded ethosomes: Ethosomes were prepared according to method reported by Touitou.  Drug and soya lecithin were dissolved in ethanol. Distilled water was added slowly in a fine stream at constant rate in well sealed containers with constant mixing by a magnetic stirrer at 700 rpm. Mixing was continued for additional 5min. This system was kept at 300C throughout the preparation 5, 16, 17. These Ethosomes were mixed with aqueous phase in place of miconazole, and then it was prepared to ointment as following above procedure.

Drug Entrapment Efficiency: The drug content was determined after separation of unentrapped drug by a sephadex minicolumn using the centrifugation technique. Sephadex (1g) was allowed to swell in 0.9% NaCl at room temperature, with occasional shaking for at least 5 hrs after which the gel was formed and stored at 4oC. Minicolumns were prepared by placing whatman paper pads at the bottom of the barrels of 1.0mL syringes

Procedure for in vitro skin permeation study: The skin was removed carefully from the pig’s ear obtained from local abattoir. After separating the full thickness skin, the fat adhering to the dermis side was removed using a scalpel and isopropyl alcohol. Finally excised skin was washed with tap water and was placed on aluminium foil, stored at refrigerator and used within two days.

The in vitro skin permeation study of miconazole from different formulations was studied using Franz glass diffusion cells 9. The effective permeation area of the diffusion cell and receptor cell volume was 3.14 cm2 and 50.0 mL, respectively. The temperature was maintained at 37±0.5oC. The receptor compartment contained PBS (50mL of pH 5.5). Excised skin was mounted between the donor and receptor compartment. 3g of vehicle having concentration 2.0% of miconazole was placed in the donor compartment. Entire assembly was kept under stirring using magnetic stirrer. Samples were withdrawn from the receiver compartment at regular intervals and analyzed spectrophotometrically at 272nm. Same procedure was repeated using Ethosomes and Liposomes as a carrier system 10, 19, 20, 22. 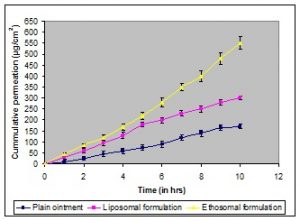 Hence it could be concluded that ethosomes released the drug at desired rate. This result shows the better sustained release of miconazole in the plasma drug concentration. The enhanced delivery of actives using ethosomes over liposomes can be ascribed to an interaction between ethosomes and skin lipids. A possible mechanism for this interaction has been proposed. It was thought that the first part of the mechanism is due to the ‘ethanol effect’, whereby intercalation of the ethanol into intercellular lipids increasing lipid fluidity and decreases the density of the lipid multilayer 5. This was followed by the ‘ethosome effect’, which includes inter lipid penetration and permeation by the opening of new pathways due to the malleability and fusion of ethosomes with skin lipids, resulting in the release of the drug in deep layers of the skin. Thus ethosome was found to be the suitable system for the sustained release in skin 5, 13, 15, 18.

CONCLUSION: The Ethosomal reservoir system delivered the drug (miconazole nitrate) at a controlled rate over 12 hrs, compared with liposomes and plain ointment and thus minimizes the toxic effects produced by drug. Hence it could be continued that ethosomal system has better skin penetration as compared to liposomes and has a better sustained action. Thus ethosomes is a suitable system for sustained topical delivery of miconazole nitrate.

ACKNOWLEDGEMENT: The authors are grateful to Peekay scientific glasswares, Bhopal for providing franz-diffusion cell and Dr. Reddy’s for providing drug.