ABSTRACT: Objective: Antibiotics resistance patterns for many bacteria have changed significantly; causing poor clinical outcomes. The objective of the study was to measure the susceptibility of different antibiotics against specific clinical isolates for surveillance purpose. Method: Kirby-Bauer disc diffusion method was used to evaluate the susceptibility pattern of four antibiotics (commercially available disc) i.e., Amoxicillin, Cefixime, Ciprofloxacin and Levofloxacin against different clinical isolates collected from various hospitals. The clinical isolates selected for the proposed study were of Staphylococcus aureus, Streptococcus Pneumoniae, Klebsiella Pneumoniae, Pseudomonas aeruginosa, Salmonella typhi and Escherichia coli. This collection of antibiotics and isolates were due to common pathogens and highly prescribed Oral antibiotics. Result: Results show that amoxicillin and cefixime are highly resistant; cefixime is sensitive against Salmonella typhi and Streptococcus Pneumoniae but 50 % resistant to the microbes. In quinolones, ciprofloxacin and levofloxacin have good sensitivity; Levofloxacin is a better choice against aforementioned pathogens. Conclusion: It was concluded that bacterial resistance rates vary among species and also from hospital to hospital. Irrational uses of antibiotics cause the change in the resistances that argue strongly for more susceptibility testing of organism. Moreover these situations compel the manufacturer and health care professionals to work over it and guide prescriber for proper selection of antibiotics.

INTRODUCTION: Antibiotics are prescribed against various diseases caused by bacteria and resistance is usually generated due to un-rational prescribing of antibiotics. In recent years one of the more alarming conditions of clinical microbiology is high risk of antibiotic resistance which is increasing day by day among pathogens. Now this increase in resistance is a global problem, no country is immune to this condition and all major bacterial pathogens have acquired resistance to at least one or more drugs 1

Over 60 years ago infections with resistant bacteria were reported. As resistance is increased, patients are on high risk of severity because of untreated pathogens 2.

In-vitro antibiotics susceptibility can be determined by disc diffusion method with measurement of zone of inhibition and by MIC method, both methods are useful and applicable. Kirby-Bauer antibiotic testing (KB testing or disk diffusion antibiotic sensitivity testing) is a test which uses antibiotic-impregnated wafers to test whether particular bacteria is susceptible to specific antibiotics. A known quantity of bacteria is grown on agar plates in the presence of thin wafers containing relevant antibiotics. If the bacteria are susceptible to particular antibiotics, an area of clearing surrounds the wafer where bacteria are not capable of growing (called a zone of inhibition). In general, larger zones correlate with smaller minimum inhibitory concentration (MIC) of antibiotic for those bacteria. Inhibition produced by the test is compared with that produced by known concentration of a reference compound. This information can be used to choose appropriate antibiotics to combat a particular infection 3.

Susceptibility can be evaluated in terms of sensitivity, resistance and immediate resistance i.e., S, R and IR. Disc method was demonstrated by Kerr et al in 2005, the test was performed by instillation of a standard amount of antibiotic into a paper disc and after drying placed on bacterial inoculums on a petri dish, incubated for growth on required temperature. The disc method is easy to set for susceptibility studies and results could be noted after 24 hours.  In 1956, W. M. M. Kirby and his colleagues at the University of Washington School of Medicine and the King County Hospital proposed a single disk method for antimicrobial susceptibility testing.

In recent years, clinical cases are increasing due to infection and have a major concern worldwide including mortality. It was found that the clinical A. calcoaceticus-A. baumannii complex isolates were frequently resistant to the last-line antibiotics for clinical treatment, including cephalosporins, aminoglycosides, fluoroquinolones, and carbapenems 4. In Taiwan, several studies further indicated the emergence of the infection, especially with regard to multidrug resistance and nosocomial infections 5, 6, 7.

In Pakistan, prescribing patterns of antibiotics without rational approach leads to bacterial resistance, majority of pathogens are resistant to multiple antibiotics and treatment will not cure the infection. This condition is alarming for pharmaceuticals and health care professionals who are involved in manufacturing and prescribing of such resistant antibiotics.

The aim of the study was to evaluate the difference in susceptibility of the antibiotics in present and past studies. This will not only help in the adjustment of the dose against different micro-organism but it will also help in the selection of appropriate antibiotic in the management against specific microbes.

A total of 101 clinical isolate of staphylococcus aureus, streptococcus pneumoniae, klebsiella pneumoniae, salmonella typhi, pseudomonas aeruginosa and Escherichia coli were collected from different pathological labs and hospital in Karachi. In present investigation disc technique was used for the determination of antimicrobial susceptibility by using zone of inhibition. The isolates were identified by standard laboratory methods 8. To obtain accuracy in study, test was carried out under sterilized environment.

Accurately weighed and transferred 7.5 gm of soya broth in 250ml conical flask. Add small amount of distilled water to dissolve it than make up the volume. Transfer this broth solution into small test tubes (2ml) and cover with cotton plugs and autoclave at 121°C for 30 minutes.

The inoculums was prepared by touching the top of colonies of isolates with sterile wire loop and then suspended in tube containing broth and incubate test tubes for few hours at 37°C until turbidity appeared.

First prepare the media plates by pouring nutrient agar in petri plate then sterile swab was dipped into a broth suspension of organism. Streak the swab evenly over the surface of medium.

By using sterile forceps the disc of amoxicillin, cefixime, ciprofloxacin and levofloxacin were placed on agar surface and incubated for 24 hours at 35-37°C.

After 24 hours of incubation, the plates were examined to ensure the growth and to measure the diameter of zone of inhibition in mm by Vernier caliper (n=3) for each antibiotic.

In-vitro susceptibility studies were conducted to evaluate the resistant microbes against prescribing antibiotics. The susceptibility of Amoxicillin, Cefixime, Ciprofloxacin and Levofloxacin were evaluated by zone of inhibition and results revealed S, R and IR antibiotics against clinical isolates by percentage analysis (Table 1)

DISCUSSION: Antibiotics are used to treat the infection caused by various microorganisms. In current study it was revealed that various antibiotics are not sensitive against their reported spectrum which is alarming signal for health care professional.

The antibiotics that were selected for study, are commonly prescribing antibiotics. The clinical isolates that were collected from different pathological laboratories, are common pathogens that cause various diseases and complications, especially E coli which is the resistant pathogen for most of UTI and soft tissue infection. The cure and prevention against such organism (bacteria) is a great challenge for physician.

Several studies were conducted to evaluate the in-vitro resistant pattern of different organism against different antibiotics. In 2012 sensitivity profiles of salmonella were 96.47% and 96.62% for Ciprofloxacin and Cefixime respectively while against Amoxicillin it was 96.48% 9.

In 2012 another study was carried out by using kirby-bauer disc method on antimicrobial resistance of gram +ve bacteria and changes of resistant pattern were observed against vancomycin from year 2007-2010 10.

Results illustrated that among the four antibiotics, quinolones are still a better option in terms of sensitivity. Rationally there are no criteria for this choice but due to continuous increment in resistance there is no other option available.

Among four antibiotics Levofloxacin is more better against S.aureus than other. This is in confirmation with the work who reported that levofloxacin was more active then amoxicillin, clarithromycin, cetriaxone, co-amoxyclave against S. Aureus isolates obtained from respiratory tract 12. For Escherichia coli and Klebsiella pneumonia, Cefixime is good than the others.

Whereas cefixime and levofloxacin both showed the same level of antibacterial activity for Pseudomonas aeruginosa. For Salmonella typhi, all are active but Cefixime is more than the others and Levofloxacin is more active against Streptococcus pneumonia.

In 2010 a study was done by using disk diffusion method. The result of the study was concluded as that the Levofloxacin and Gatifloxacin have excellent in-vitro antibacterial activity 11.

In the purposed study, zone of inhibitions were used to evaluate and compare the antibiotics sensitivity against different organisms that could be presented by Figure 1- 6. 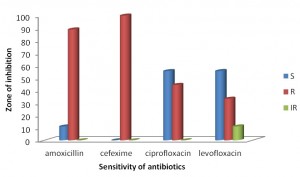 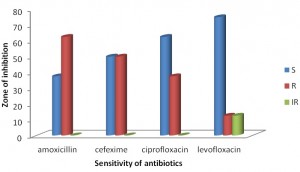 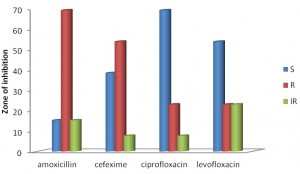 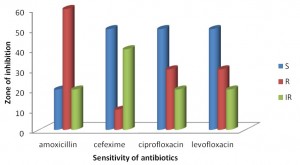 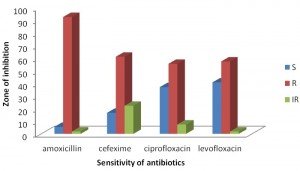 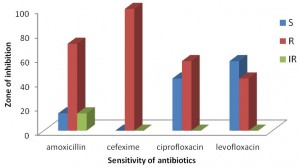 Conclusion: It could be concluded that among four antibiotics that were used in the present study, Ciprofloxacin and Levofloxacin are better choice against several pathogens. Whereas on the other hand Cefixime is sensitive against few pathogens but the prescribing of quinolones is not the first choice of antibiotics therapy. So it is the critical and crucial time to decide that what will be the next choice of oral antibiotics left for health care professionals after developing resistance for quinolones.

Acknowledgement: The authors would like to thank to Department of Pharmaceutics, Faculty of Pharmacy, University of Karachi, Pakistan for financial and moral support and also for providing laboratory facility.